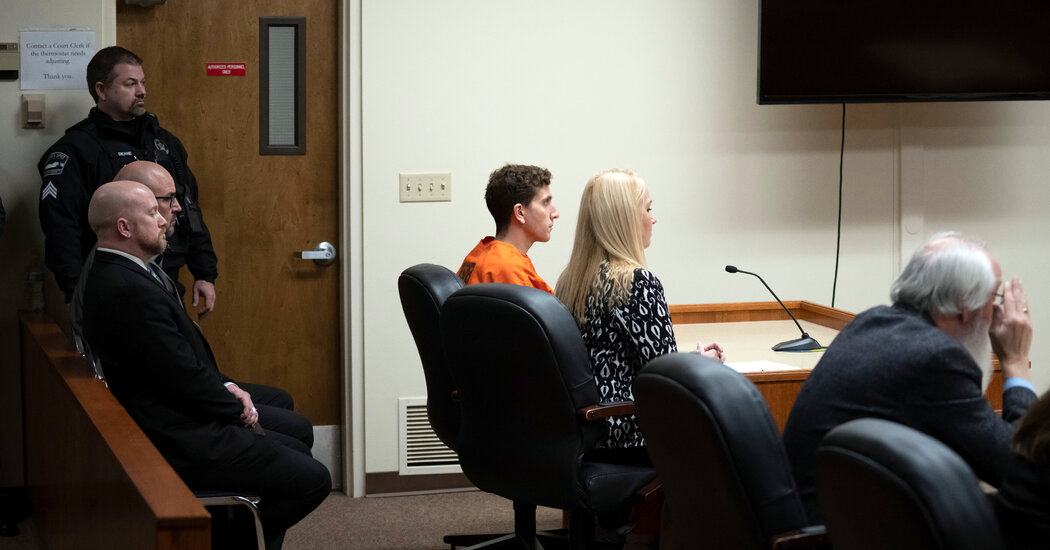 On the night four college students were killed, a roommate saw a man clad in black walk through the home. It took a cross-country investigation to find a suspect. 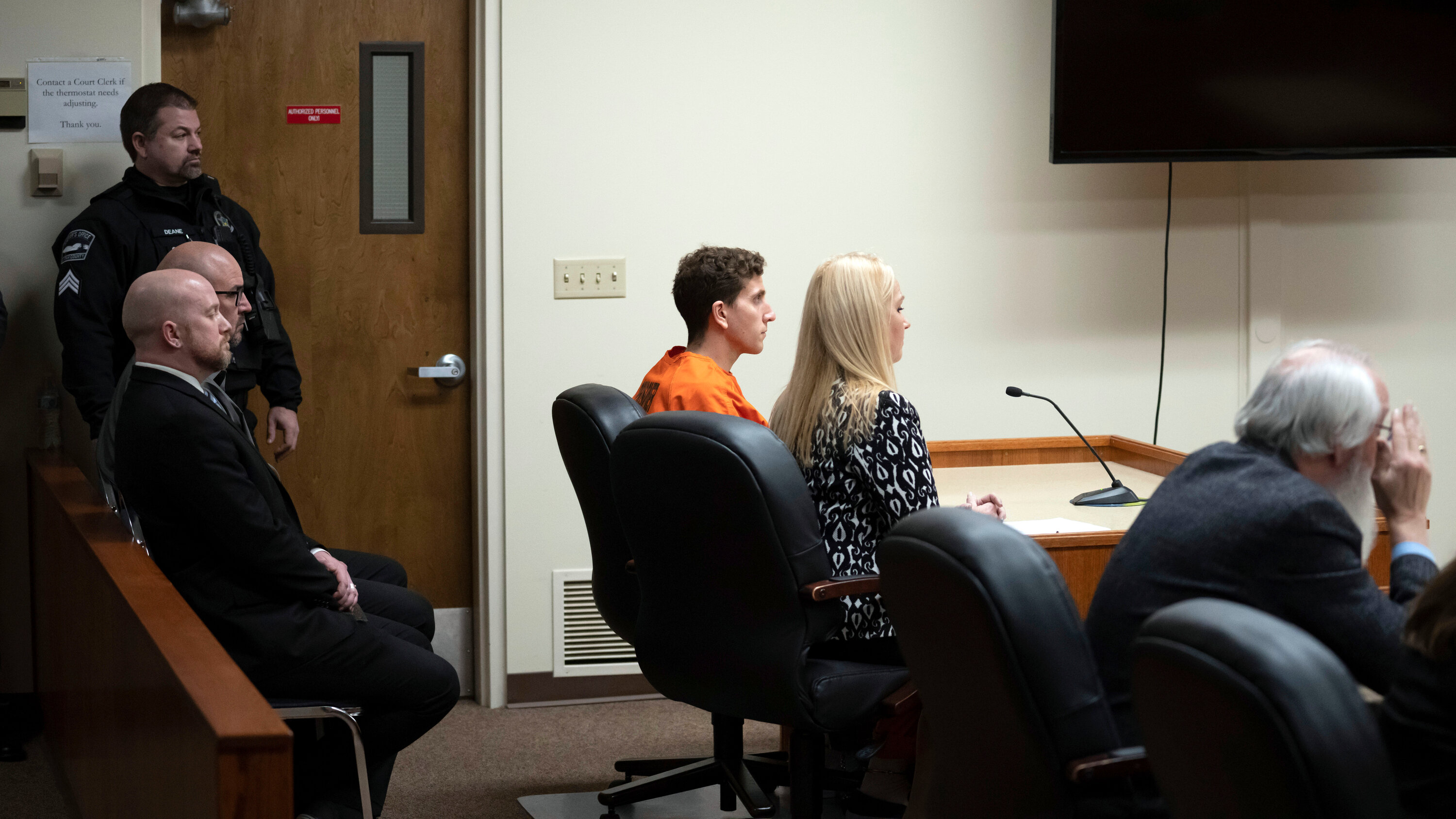 MOSCOW, Idaho — On the night in November when four University of Idaho students were murdered in a home near campus, another roommate awoke to a noise that she thought was her friend playing with her dog. Then she heard someone crying, and a man saying something like, “It’s OK, I’m going to help you.”

When the roommate peered out of her room just after 4 a.m., she later told investigators, she stood in “frozen shock” as a man wearing black clothes and a mask walked by her toward the home’s back door. She did not recognize him, she said, but she noticed his bushy eyebrows.

It was not until many hours later that the full extent of what had happened upstairs and down the hall became clear: Four students had been stabbed to death, leaving two roommates — and a dog whose barking had been loud enough to be heard outside — alive.

On Thursday, law enforcement officials ended nearly two months of silence on the details of their investigation and unveiled an array of evidence they say left them with little doubt about the identity of the killer: Bryan Kohberger, a 28-year-old Ph.D. student in criminology at a neighboring university.

Mr. Kohberger, who was arrested on Dec. 30 at his parents’ home in the Pocono Mountains of Pennsylvania, appeared in court for the first time in Idaho on Thursday to face charges of first-degree murder and felony burglary.

In a packed courtroom where the father of one victim was sitting in the front row, Mr. Kohberger hardly spoke except to say that he understood that the maximum penalty for each murder charge was life imprisonment or death. His public defender, Anne Taylor, said in court that Mr. Kohberger “has a good family that stands behind him.” He has said through another lawyer that he looks forward to being exonerated. 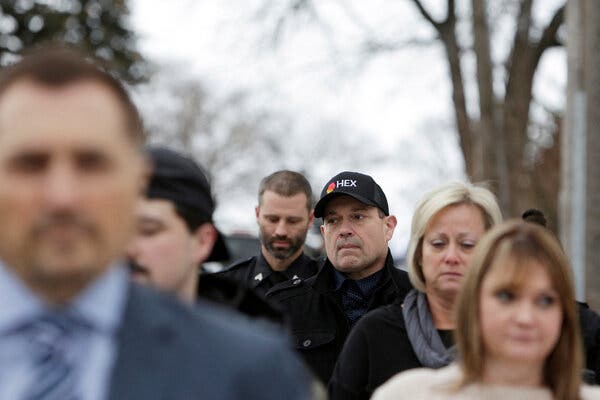 Steve Goncalves, center, the father of Kaylee Goncalves, one of the four victims, leaving the arraignment on Thursday.Credit…Young Kwak/Reuters

Authorities have yet to detail a motive in the killings, nor has there been any explanation for why the two surviving roommates, who are also students at the University of Idaho, did not call 911 until shortly before noon the next day.

But in a small college town that had not recorded a murder in seven years, the newly unsealed court records offer a detailed account of how police officers, with the aid of dozens of F.B.I. agents, methodically triangulated clues. Among them were DNA found on a knife sheath left at the scene, surveillance cameras in the neighborhood, cellphone tower records and DNA from the suspect’s father collected from the family’s trash in Pennsylvania — all of which, the police said, pointed to Mr. Kohberger.

The early morning attack at the house along a dead-end street, a five-minute walk from campus, claimed the lives of Madison Mogen, 21; Kaylee Goncalves, 21; Xana Kernodle, 20; and Ethan Chapin, 20.

It came after an otherwise typical Saturday night. Ms. Kernodle and Mr. Chapin, who were dating, had attended a fraternity party together, and Ms. Goncalves and Ms. Mogen had gone to a bar. All four victims, as well as the two surviving roommates, were back at the home before 2 a.m.

The new documents suggest that Ms. Kernodle was awake around the time of the killings, receiving a DoorDash delivery around 4 a.m. and apparently using the TikTok app on her phone 12 minutes later. Police said the murders likely happened before 4:25 a.m.

In addition to hearing the crying and the man’s voice, the roommate on the second floor also heard one of her roommates say something like, “There’s someone here,” around 4 a.m.

At roughly the same time, a security camera from a nearby home picked up distorted audio of a whimpering sound and a loud thud. A dog could be heard barking several times.

A variety of surveillance footage collected from the neighborhood gave investigators some of their early leads, showing that, shortly before the crimes, a white Hyundai Elantra had made three passes along the dead-end street where the killings took place. It returned a fourth time, at 4:04 a.m., around the time the surviving roommate said she had woken up.

The vehicle was seen 16 minutes later leaving the neighborhood “at a high rate of speed,” according to the affidavit, which was signed by Cpl. Brett Payne of the Moscow Police.

Investigators began scouring the region for similar cars. At the end of November, a campus police officer at Washington State University, which is about a 15-minute drive from the University of Idaho and the crime scene, discovered that an Elantra belonging to Mr. Kohberger was registered with the university.

The investigators soon found from Mr. Kohberger’s driver’s license that he matched the roommate’s description of the man in the mask, including, they say, the bushy eyebrows.

In December, Mr. Kohberger drove home to Pennsylvania with his father for winter break while investigators were still piecing together their case. Two days before Christmas, the police were able to obtain cellphone tower records showing that on the night of the killings, Mr. Kohberger’s phone had stopped connecting to cell towers somewhere near his apartment in Pullman at 2:47 a.m. before reconnecting somewhere south of Moscow at 4:48 a.m. — suggesting that his phone had either traveled out of a coverage area or been turned off.

His phone had already been in the area of the house 12 times in the months before the murders, according to the affidavit.

He appears to have also been back in the vicinity of the house hours after the killings, but before the victims were found, according to the court affidavit. Cell tower records showed that his phone had traveled from Pullman back to Moscow, connecting for nine minutes to the cell network that services the neighborhood of the crime scene.

Investigators had another key piece of evidence: the DNA sample found on the button snap of a tan leather knife sheath that had been left on a bed next to the bodies of Ms. Goncalves and Ms. Mogen.

In December, investigators traced Mr. Kohberger to his parents’ house in Pennsylvania. On Dec. 27, while he was there over winter break, the police managed to retrieve some garbage from the house and sent what appears to have been a DNA sample from Mr. Kohberger’s father for testing. The results showed a strong probability that the elder Mr. Kohberger was the father of whoever left DNA on the knife sheath.

In a predawn raid on Dec. 30, the police broke through windows and doors of the family home and arrested the younger Mr. Kohberger. They followed up quickly with searches of his apartment in Pullman, the white Hyundai Elantra he had driven with his father to Pennsylvania and the parents’ home. They also got a court order to obtain a direct DNA sample from Mr. Kohberger.

Friends of the victims have been searching for possible connections between the victims and the accused killer — so far, disclosing none — and classmates of Mr. Kohberger’s at Washington State University have examined their own recollections to try to identify clues.

Some said Mr. Kohberger spent time studying the exact kind of techniques that the police used in recent weeks to identify him, and had a deep interest in criminal psychology and crime scenes.

Benjamin T. Roberts, a fellow graduate student at Washington State, said Mr. Kohberger had been interested in areas like psychology and Rational Choice Theory, which suggests that offenders may often try to assess the potential costs and benefits of committing a crime.

But peers also said he at times caused conflict in the program. Mr. Roberts recalled that Mr. Kohberger tended to be more forceful and condescending in challenging the ideas of female students during discussions in classroom settings.

“There was a consistent pattern in which he would push back more with women colleagues than with male colleagues,” he said.

One new revelation in the court affidavit had a tinge of irony: After enrolling in the Ph.D. program at Washington State in August, Mr. Kohberger had applied for an internship. In an essay as part of the application, he described his interest in helping rural police departments collect and analyze data as part of public safety operations. The internship he applied for was at the Pullman Police Department, whose officers would wind up helping in the investigation of the murders.

Home » Selected Articles Review » A Knife Sheath, Phone Pings and Trash: The Hunt for a Killer in Idaho
a