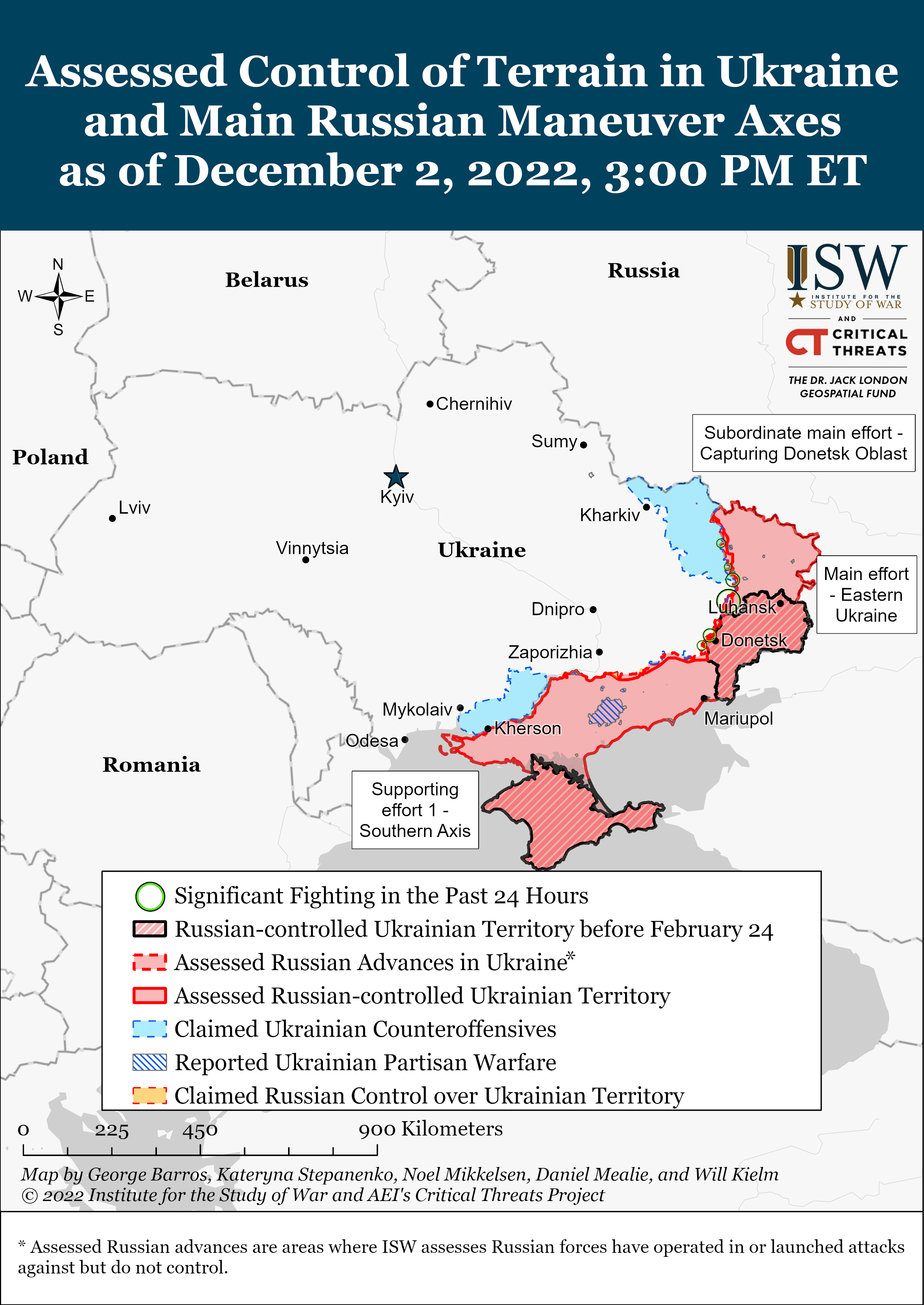 Russia is attempting to capitalize on the Western desire for negotiations to create a dynamic in which Western officials feel pressed to make preemptive concessions to lure Russia to the negotiating table. Russian President Vladimir Putin held an hour-long telephone conversation with German Chancellor Olaf Scholz on December 2 in which Putin falsely stated that Western financial and military aid to Ukraine creates a situation in which the Ukrainian government outright rejects talks between Moscow and Kyiv and called upon Scholz to reconsider Germany’s approach regarding developments in Ukraine.[1] Scholz stated that any diplomatic solution to the conflict in Ukraine must include the withdrawal of Russian forces from Ukrainian territory.[2] The Putin-Scholz call corresponded with a diplomatic overture from US President Joe Biden on December 1 in which Biden stated that he is prepared to speak with Putin if the Russian president is looking for a way to end the war, although Biden acknowledged that he has no immediate plans to do so.[3]

Kremlin Spokesperson Dmitry Peskov responded to Biden’s comments on December 2 stating that Biden seems to be demanding the removal of Russian forces from Ukraine as a precondition for negotiations and said that the “special military operation” would continue.[4] Peskov added that America’s reluctance to recognize Russia’s illegal annexation of Ukrainian territories significantly complicates the search for common ground in possible negotiations.[5]

Putin’s and Peskov’s statements regarding negotiations follow Russian Foreign Minister Sergei Lavrov’s December 1 comments in the context of a meeting of the Organization for Security and Co-operation in Europe (OSCE) repeating precisely the same demand the Kremlin had made of the US and NATO before the February 24 invasion. Lavrov said that Russian officials will be ready to talk with Western officials if the West shows its willingness to discuss the documents Russian officials proposed in December of 2021.[6] The Russian Foreign Ministry published a draft of its “security guarantees” demands of the US and NATO on December 17, 2021, which called for an expansive list of concessions on NATO and Western military actions in Europe, including, as ISW noted at the time, “a moratorium on NATO expansion, a revocation of the 2008 NATO Bucharest Summit Declaration that Ukraine and Georgia are eligible to become NATO members, a moratorium on establishing military bases on the territory of former Soviet and current non-NATO states, not deploying strike weapons near Russia, and rolling back NATO to its 1997 posture when the Russia­–NATO Founding Act was signed.”[7] The Russian Foreign Ministry had issued a statement on February 17 threatening to take “military-technical measures” in response to the refusals by the US and NATO to negotiate on this basis—those military technical measures were the “special military operation” that began a week later.

ISW has previously assessed that Vladimir Putin’s rhetoric indicates that he is not interested in negotiating seriously with Ukraine and retains maximalist objectives for the war.[8] It is likely that Putin, Lavrov, and Peskov made these statements regarding negotiations to create a perception among Western officials that Russia needs to be lured to negotiate. The Kremlin likely intends to create a dynamic in which Western officials offer Russia preemptive concessions in hopes of convincing Russia to enter negotiations without requiring significant preliminary concessions of Russia in return. Putin’s, Lavrov’s, and Peskov’s statements highlight what some of those desired preemptive concessions may be: decreased Western financial and military aid to Ukraine, recognition of Russia’s illegal annexation of Ukrainian territory, and restrictions on NATO and Western military actions in Europe. The Kremlin has also kept its language about the subject of negotiations vague, likely in order to convince Western officials to begin negotiation processes without a clear definition of whether negotiations are in pursuit of a ceasefire, a peace process, or a final peace agreement.

Russia would benefit from a temporary agreement with Ukraine and Western countries that creates a pause in hostilities that allows Russia to strengthen the Russian Armed Forces for future military operations in pursuit of maximalist goals in Ukraine.[9] Putin has shown little interest in such a ceasefire, however, and the Kremlin continues to make demands that are tantamount to full Western surrender, suggesting that Putin remains focused on pursuing military victory.

Western leaders rebuffed the Kremlin’s efforts and reaffirmed their support for Ukraine. Biden and French President Emmanuel Macron in a joint press conference on December 1 reiterated their commitment to support Ukraine in its war against Russia.[10] Biden’s and Macron’s joint show of support for Ukraine and Scholz’s insistence on the complete withdrawal of Russian forces from Ukraine indicate that France, Germany, and the US are not prepared to offer Russia significant preemptive concessions at this time. Biden added that “the idea that Putin is ever going to defeat Ukraine is beyond comprehension.”[11]

Russia may be trying to use its coordinated missile-strike campaign against Ukrainian infrastructure and the associated humanitarian situation in Ukraine to add pressure on Western officials to offer preemptive concessions. Putin falsely stated in his call with Scholz that Russia has been left with no choice but to conduct missile strikes on targets in Ukrainian territory.[12] Russia may be relying on causing undue human suffering, possibly to generate another wave of refugees, to pressure Western officials to offer preemptive concessions because the Russian military has been unable to achieve strategic success.

Russia still poses a threat to the Ukrainian energy grid and civilian population despite Ukraine air defense forces’ high rates of shooting down Russian missiles and drones at the current level of Ukrainian air defense capabilities. Ukrainian General Staff Deputy Chief Brigadier General Oleksiy Hromov stated that Ukrainian air defenses shot down 72% of 239 Russian cruise missiles and 80% of 80 Iranian-made Shahed-136 drones launched throughout November.[13] Ukrainian Air Force Command Spokesperson Yuriy Ignat also noted that Ukrainian and Western-provided air defense systems have been “exhausting” Russian missile stockpiles and forcing the Russians to compensate for dwindling high-precision missiles by using inert Kh-55 designed solely to carry nuclear warheads as decoys.[14] Ignat, however, stated that the use of Kh-55 missiles alongside other missiles and drones is also wearing down Ukrainian air defenses. The small percentage of Russian strikes getting through Ukraine’s air defenses are nevertheless having significant effects on Ukrainian critical infrastructure, with Ukrainian President Volodymyr Zelensky stating that recent strikes had left six million Ukrainians without power ahead of winter.[15]

Russia will likely continue to target Ukrainian critical infrastructure at least as long as enough Russian weapons can get through to achieve effects. The UK Ministry of Defense assessed that Russia’s Destruction of Critically Important Targets (SODCIT) strategy is not as effective as it would have been during the earlier stages of the war, given that Ukrainians have successfully mobilized society.[16] ISW continues to assess that Russian strikes on critical infrastructure are unlikely to break Ukrainian will.

Additional Western-provided air defense systems are prompting the Russian pro-war community to question the long-term sustainability of the Russian missile campaign. Several prominent Russian milbloggers noted that the “build-up” of Western air defense systems in Ukraine is complicating Russia’s ability to conduct missile strikes on Ukrainian energy infrastructure and demanded that the Kremlin speed up its missile campaign.[17] A milblogger even reiterated Western assessments that current Russian missile strikes will have little effect on the frontlines unless “Russians drop their foolishness” and finish the campaign soon.[18] ISW previously reported on similar milblogger concerns over US-provided HIMARS systems, which have allowed Ukrainian forces to conduct successful interdiction campaigns.[19] Such panic among Russian milbloggers highlights the vulnerability of the Russian missile campaign if the West continues to enhance Ukraine’s air- and missile-defense capabilities.

Russia is setting conditions to negotiate the demilitarization of the Zaporizhzhia Nuclear Power Plant (ZNPP) in return for a Ukrainian guarantee of the continued flow of gas to Europe through the Druzhba pipeline, but Russia would likely violate any such agreement and blame Ukraine for not upholding it. Russian nuclear energy agency Rosatom head Alexei Likhachev stated that international negotiations to establish a safety and security zone around the ZNPP in Enerhodar, Zaporizhia Oblast continue, and International Atomic Energy Agency (IAEA) Director-General Rafael Grossi stated that he hopes that the IAEA, Russia, and Ukraine will reach an agreement by the end of the year – now less than 30 days away.[20] Russian opposition outlet Meduza reported on December 2, citing its sources within the Kremlin, that Russia is preparing to withdraw from the ZNPP without withdrawing from the area of Zaporizhia Oblast that surrounds the plant but did not specify whether the withdrawal would only apply to military units or would include occupation administrators.[21] Such an agreement would likely at least include military personnel and equipment.

The Ukrainian General Staff reported on December 1 that Russia is pulling forces and occupation authorities from various parts of occupied Zaporizhia Oblast, and Ukraine’s Main Intelligence Directorate (GUR) reported on December 2 that there are only 500 Russian military personnel at the ZNPP and that withdrawing Russian personnel-planted 300 mines in the industrial zone of Enerhodar.[22] Meduza reported that the Kremlin expects that Ukraine would guarantee the uninterrupted pumping of gas through the Druzhba pipeline, which will become Russia’s main method of transporting gas to Europe on December 5 when the European Union’s embargo against water-transported Russian gas comes into effect.[23] However, as ISW has previously reported, Russia and its proxies have a long history of violating peace deals brokered with Ukraine and other states, then subsequently blaming the other party and leveraging the blame to fail to uphold Russia’s own obligations.[24]

Demilitarizing the ZNPP without a withdrawal of Russian forces from broader western Zaporizhia Oblast would not eliminate or diminish the ongoing threat to the ZNPP. Even if Russia did withdraw both its forces and occupation administration from Enerhodar, Russian forces would still control the surrounding area and would retain the ability to strike all the areas they are currently able to strike, including the ZNPP itself. Rather, so long as the military situation remains unchanged in southern Ukraine, Russia would most likely accuse Ukrainian forces of violating the terms of their agreement and use such accusations to justify a remilitarization of the ZNPP and set longer-term information conditions to falsely undermine Ukraine’s ability to safely operate the ZNPP and commit to any future ceasefire or peace agreements.