When fellow skiers sent Amadeo Reale photos of churned mud and grassy slopes at their French and Swiss ski resorts last week, he shuddered in sympathy, but felt no sense of foreboding. As the president of Cortina d’Ampezzo’s historic Sci Club 18, he is confident that Italy’s premier ski resort in the Dolomites is pretty much immune to the no-snow-pocalypse that emptied out Europe’s prime ski destinations over the winter holidays. After all, most European resorts are located at 900-1,000 meters (2,952 to 3,280 ft.) above sea level. Cortina d’Ampezzo starts at 1,600 meters (5,249 ft.) and ascends to 2,362 m (7,749 ft.). Even if the lower slopes get a little slushy from above average temperatures, as they did last week, well, there is always manufactured snow. Cortina d’Ampezzo will host the women’s world ski championships this weekend, and after five days of low temperatures and steady efforts by the resort’s snow cannons, the slopes are in perfect condition, says Reale.

A lot hinges on a steady snowpack. In February 2026 Cortina d’Ampezzo will host the Winter Olympics’ downhill events, and Reale is confident that there will be plenty of snow (manmade or natural), and enough cold weather, to make it stick. But artificial snow is only a stopgap solution, and an expensive one at that. Snow cannons only work at freezing temperatures or below. “The only thing we are scared of is having one or two months of hot weather,” he says, which is unlikely at the resort’s elevation, at least for the near future. 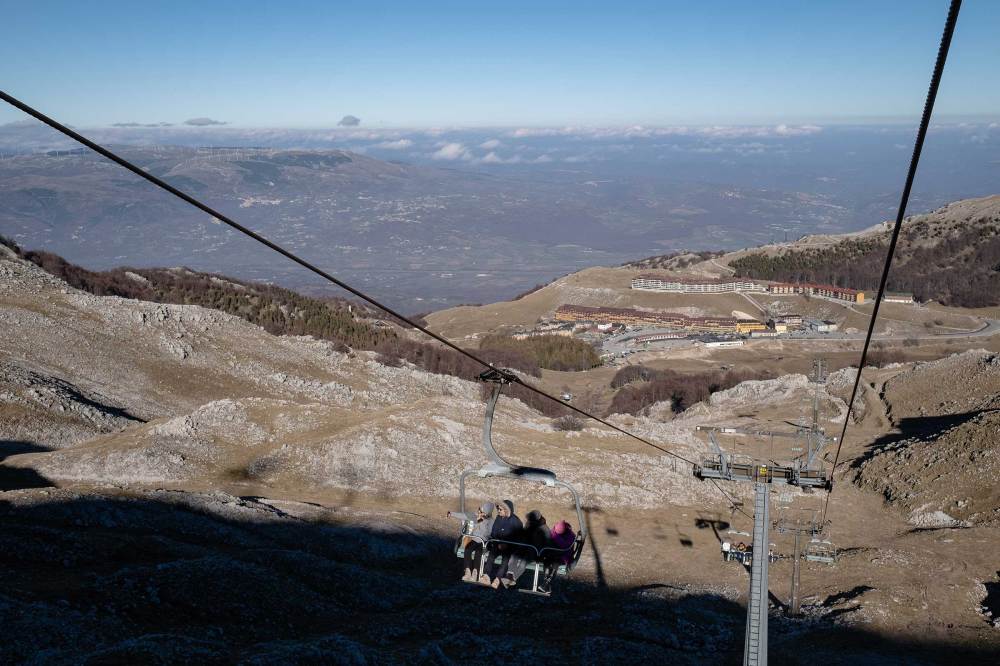 Manuel DoratiVisitors ride the chairlift to the top of Mount Miletto in San Massimo, Italy. 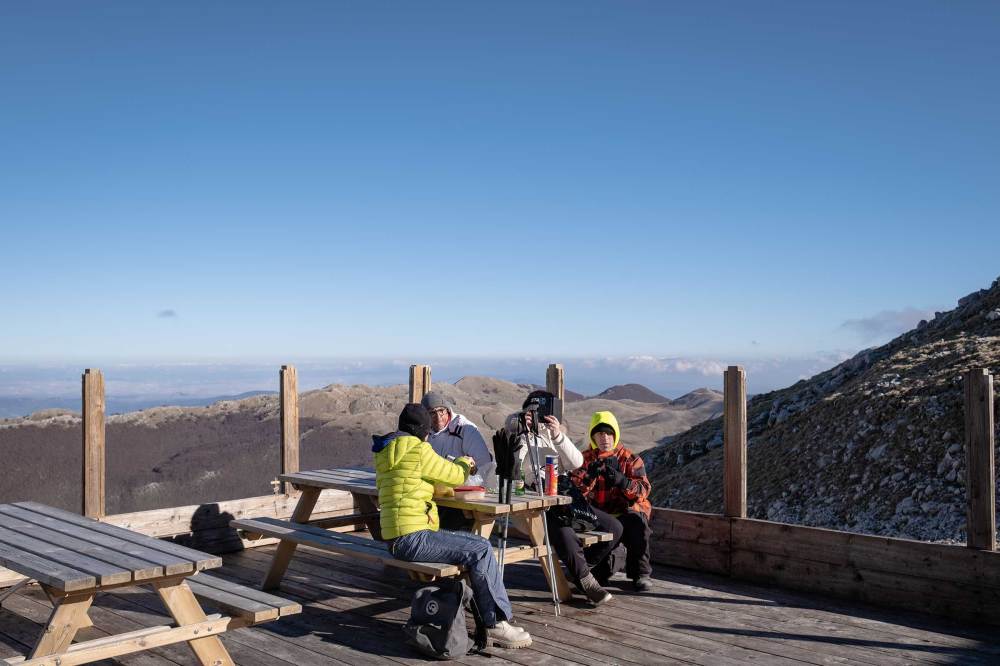 Manuel DoratiVisitors eat lunch at the top of a snowless Mount Miletto in Italy.

Over the winter holidays, though, most of Europe’s resorts got a taste of that much warmer future—the Swiss resort of Gstaad ended up flying in snow by helicopter from elsewhere in Switzerland when temperatures hit 20°C (68°) in early January. It’s not the first time Europe’s ski resorts have been without snow, but it’s the first time that snow cannons, at least since they were first deployed in the ‘80s, couldn’t make up for the shortfall because of high temperatures. This drove home the reality of winter without snow to resorts and skiers alike.

A version of this story first appeared in the Climate is Everything newsletter. To sign up, click here.

Winter sports have become a major economic engine for alpine villages that have pinned their fortunes on regular snow and the skiers that seek it out every year, spending hundreds of dollars a day in lift fees, hotels, restaurants, and equipment rentals. When there is no snow, there are no tourists, and no income. Rolando Galli says that his ski lift operation, in the Italian Apennines resort of Abetone, is down €2 million ($2.15 million) compared to this time last year, due to a lack of snow this season. For the area as a whole he estimates that it comes to about €10 million ($10.7 million) in lost lodging, dining, and shopping revenues.

While temperatures have gone back down to below freezing in most of Europe’s alpine regions this week, the climate trajectory suggests that muddy ski slopes will become a regular part of the future. Already the region has averaged a 2°C increase in temperatures since pre-industrial times, compared to the globe’s 1.2°C. That doesn’t mean there won’t be any snow, in fact, there could be increased periods of excessive snow, interspersed by bouts of rain or even hot days—extreme weather variations are as much an effect of climate change as increasing average temperatures. That doesn’t bode well for businesses, like ski resorts, that depend on reliable conditions. 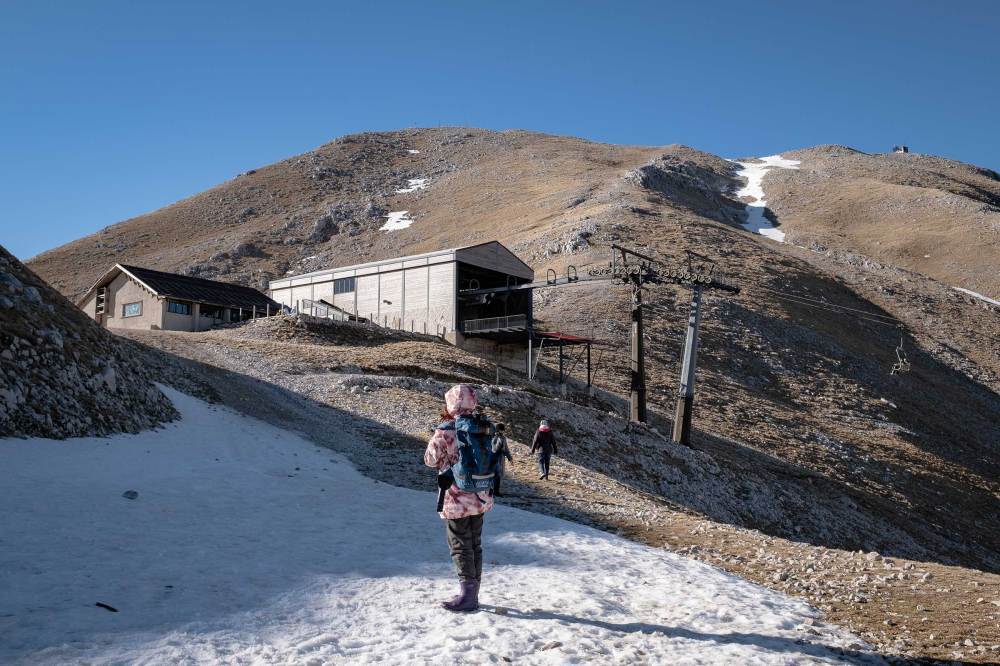 Manuel DoratiCampitello Matese, a popular ski resort in central-southern Italy, cannot support skiers this season due to high temperatures and lack of snow. 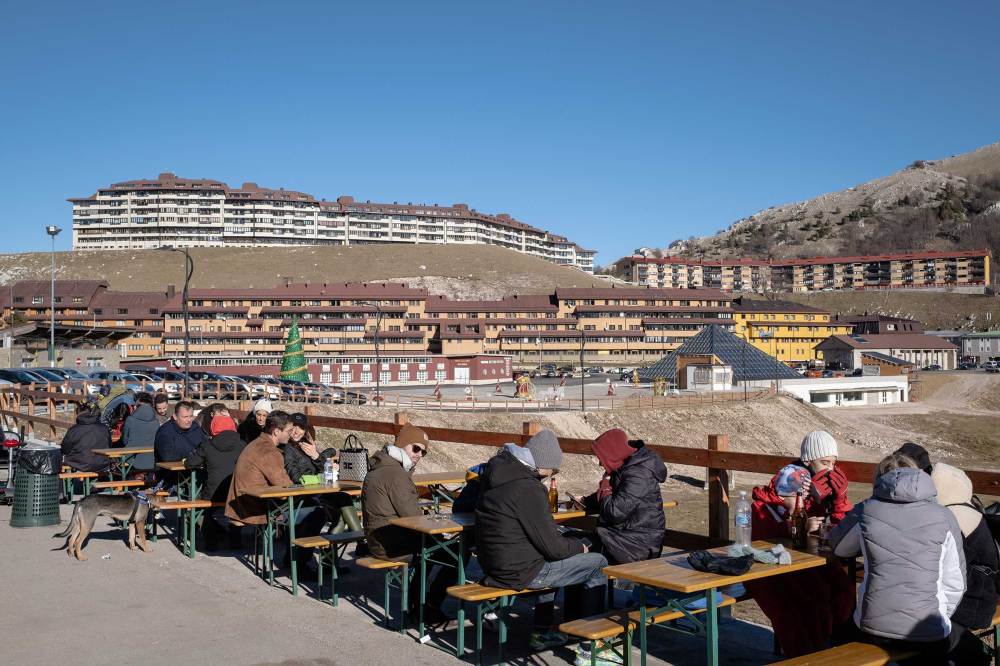 Manuel DoratiVisitors eat lunch outside the Campitello Matese ski resort where skiing and other winter sports were unavailable in early January 2023.

Even if it dumps snow for the rest of the season, Galli says, there is no way to make up for this year’s lost income. He has already diversified his business model by running lifts in the summer for hikers and vacationers, which helps, but for winter there aren’t many options. He tried running the lifts even without snow this year, but not many tourists were willing to brave the fog and rain for little more than a glimpse of the end of their noses by the time they reached the top of the mountain. “It’s not like climate change means warm weather and nice views at 1,500 meters above sea level in December,” he says. Until it does, the only solution for saving the industry, he says, is to use artificial snow as much as possible to help people ski through the winter. Resorts further south may not even be able to bet on manmade snow in years to come. The ubiquitous snow cannons at Campitello Matese, one of the largest and most popular ski resorts in central-southern Italy, were paralyzed earlier this month due to persistent high temperatures. There, at least, would-be skiers were able to pivot to more typical summertime activities, like quad bikes and horse riding.

Reale, in Cortina d’Ampezzo, says Italy’s northern resorts will be spared that fate, at least in the short term. “We all know global warming is a serious thing, but for the future of skiing in Cortina, I don’t think there is any problem, especially with artificial snow.”

Longer term, it’s not so clear. A 2022 study published in the journal Current Issues in Tourism, predicted that out of the 21 cities, including Cortina d’Ampezzo, that have hosted the Winter Olympics since 1924, only a handful will reliably offer safe and fair conditions for competition by mid-century under current greenhouse gas emission scenarios. Even under a low emissions scenario in line with the goals of the Paris climate agreement to keep warming below 1.5°C since the pre-industrial area, Cortina d’Ampezzo is only rated “marginal” for downhill events by the 2050s; without emission reductions, it is rated unacceptable. (Out of all previous hosts, only Sapporo in Japan is considered a reliable bet for the 2078 or 2082 games under either emission scenarios.)

Last year, the International Olympic Committee held off naming a host for the 2030 Winter Olympics, saying it is now considering rotating the event among several hosts as a response to the impact of climate change on winter sports. Last week, organizers of the World Cup Skiing Championships were forced to cancel this year’s men’s downhill and giant slalom events in Garmisch-Partenkirchen, Germany, for lack of snow, and a “not favorable weather forecast” for the scheduled Jan. 28-29 dates. 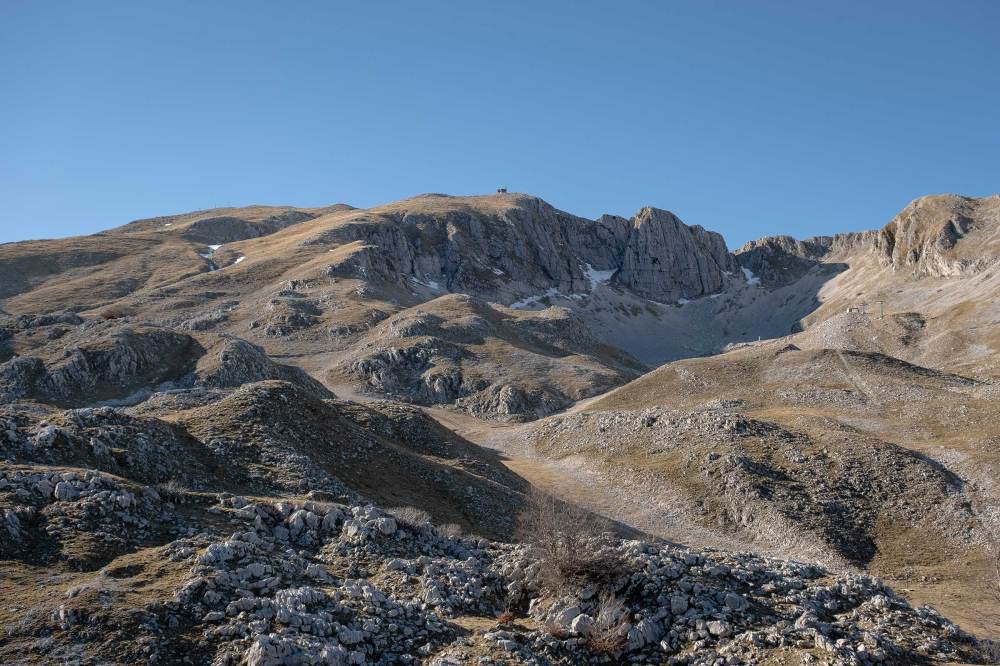 Italians are taking note. “Take off the blinders: The future of skiing does not exist, and those who work in tourism must accept it,” screamed a Jan. 12 headline in the Italian online newspaper Linkiesta, pointing to pessimistic studies predicting the end of skiing in the Dolomites by as soon as 2036. Marco Bussone, president of Italy’s Union of Mountain Communities, told the Italian newspaper Corriere Della Sera that it was vital for winter sports meccas to start investing in summertime activities. We “need to reflect on what mountains [mean] today in the light of climate change.”

While no one is writing off winter sports just yet, a fuller embrace of summertime options is probably a good business strategy. In addition to running lifts and operating mountain lodges in the summertime, Galli, who is also the president of the Abetone tourist board and a board member of the National Ski Lifts Association, suggests that the government and mountain communities invest in reservoirs. In winter they can provide water for the increased use of snow cannons, and in the summer they could become tourist destinations—for fishing, boating and sightseeing. And, in anticipation of another symptom of a changing climate, they also provide water to combat bushfires. “Climate change is something that we have to face,” he says. “We can’t just put our heads in the ground and ignore it.”