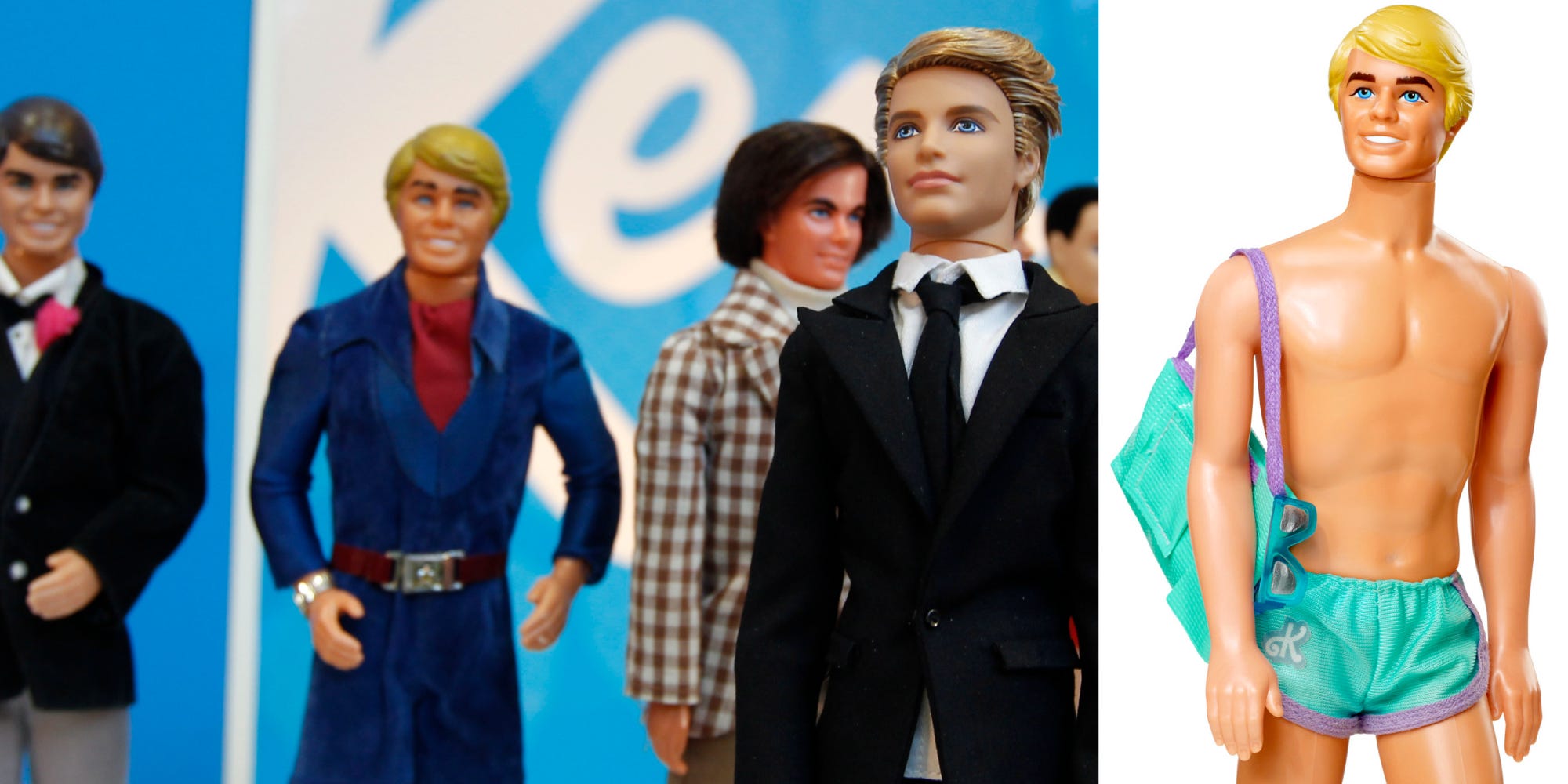 Ken dolls over the years.

Ken would have had much more of a “bulge” if Barbie’s creator got her way.

Ruth Handler, who introduced the plastic doll to the world in 1959, wanted to give Barbie a boyfriend. So two years later Mattel started selling Ken, named for Handler’s son, Kenneth.

“When we went about designing Ken, I felt that he needed what we all primly referred to in those days as a ‘bulge,'” Handler wrote in her autobiography “Dream Doll,” published in 1994.

“Both the all-male design and marketing staffs, however, disagreed, so the groin on the first Ken doll was as smooth as Barbie’s.” 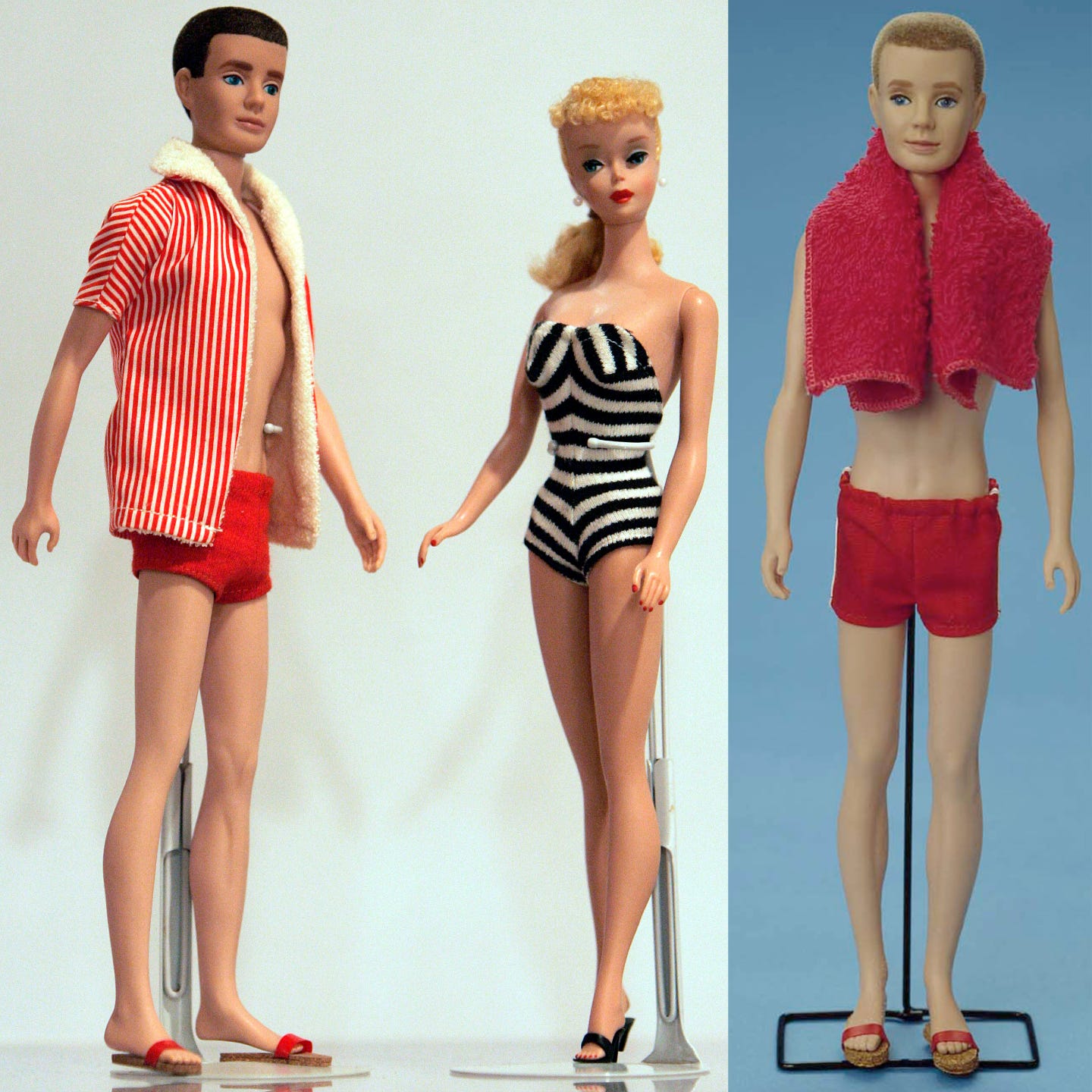 Handler “saw herself as ahead of her time, arguing that there should at least be a bulge that would suggest realism,” Robin Gerber wrote in “Barbie and Ruth,” her 2000 biography of Handler.

Cy Schneider, a Mattel advertising exec, wrote in his 1987 book “Children’s Television: The Art, the Business, and how it Works” that company staff weren’t sure “how explicit” to make Ken. They worried that adding genitalia would cause some mothers to object, but omitting it could cause the dolls to look like “some wounded Hemingway hero,” he wrote.

When designing the dolls under the Barbie brand, Mattel consulted Ernest Dichter, a psychologist and marketing expert with a specialism in Freudian psychoanalytic concepts.

“He pointed out the primary play mode for the Barbie and Ken dolls was dressing and undressing them,” wrote Schneider. “He questioned whether children would understand that Ken was a boyfriend or comprehend what a boyfriend really was. Would they see Ken as their fathers, brothers, or the boy next door? And if so, was it healthy to see him undressed? And when he was naked, why did he or didn’t he look like Daddy or a brother?”

Ken dolls over the years.

“At Mattel, a storm raged over his genitalia,” M.G. Lord’s wrote in her 1994 book “Forever Barbie: The Unauthorized Biography of a Real Doll,” with Handler and Barbie clothing designer Charlotte Johnson fighting for a doll with a noticeable crotch and the other male execs fighting against it.

After a male doll with the same completely smooth crotch as Barbie had been vetoed by Handler and Johnson, three new versions were were sculpted with varying degrees of “bumps,” Lord wrote.

“The men — especially one of the vice presidents — were terribly embarrassed,” Lord quoted Johnson as saying. After Handler and Johnson picked the middle one, the vice president said “he would never have it in the toy line unless we painted Jockey shorts over it,” Johnson told Lord.

“Ruth felt the design team lacked ‘the guts’ to give the Ken doll even the suggestion of male sex organs,” Gerber wrote. “Despite ordering prototypes with varying degrees of bulge in the crotch, the male designers resisted all but the barest hint of a penis.”

Instead of having a recognizable penis, “underwear was painted on the nearly flat surface of Ken’s genital area and buttocks,” Gerber wrote.

Lord wrote that Handler had never wanted a doll with a penis showing.

“If the child took off the swimsuit, we felt it would be inappropriate with an adult boy to show the penis – so we all reached a conclusion that he should have a permanent swimsuit,” Lord quoted Handler as saying.

“No curious little girl would ever be able to remove his underwear,” Schneider wrote.

But Johnson disagreed, per Lord’s book. “Do you know what every little girl in this country is going to do?,” it quoted Johnson as saying. “They are going to sit there and scratch that paint off to see what’s under it. What else would they do?”

Lord wrote that ultimately the men “reluctantly” agreed and decided to give Ken a “bump.”

“I had to work with the sculptor a little bit,” Johnson said, per the book, “because I realized when we were putting zippers in the fly – and the zipper on top of that bump – it got bigger and bigger.”

But this didn’t work out, anyway. “Somehow in the manufacturing process in Japan, one of the engineering supervisors determined that molding on the shorts was too difficult and that the lump added about a cent and a half worth of plastic to the plastic of the product, so he arbitrarily eliminated both,” Schneider wrote.

Just like Barbie, Ken came with a range of clothing options.

Instead, the first Ken to be released on the market came with a greatly smoothed-over crotch which contrasted with his clearly-defined buttocks. His two legs were created as separate, moveable pieces. No underwear was painted on him, but he came with a small pair of red swim shorts to cover his dignity. The first Barbie on sale came with swimwear, too – a zebra-striped swimsuit.

Like Barbie, the original Ken was available in both blonde and brunette.

“Mattel was careful to give him boyish, clean-cut looks and the overall, non-threatening, asexual appearance of a wimpy little jerk,” Schneider wrote. “His androgynous looks and his lack of sexual equipment immediately became a hot internal issue.” 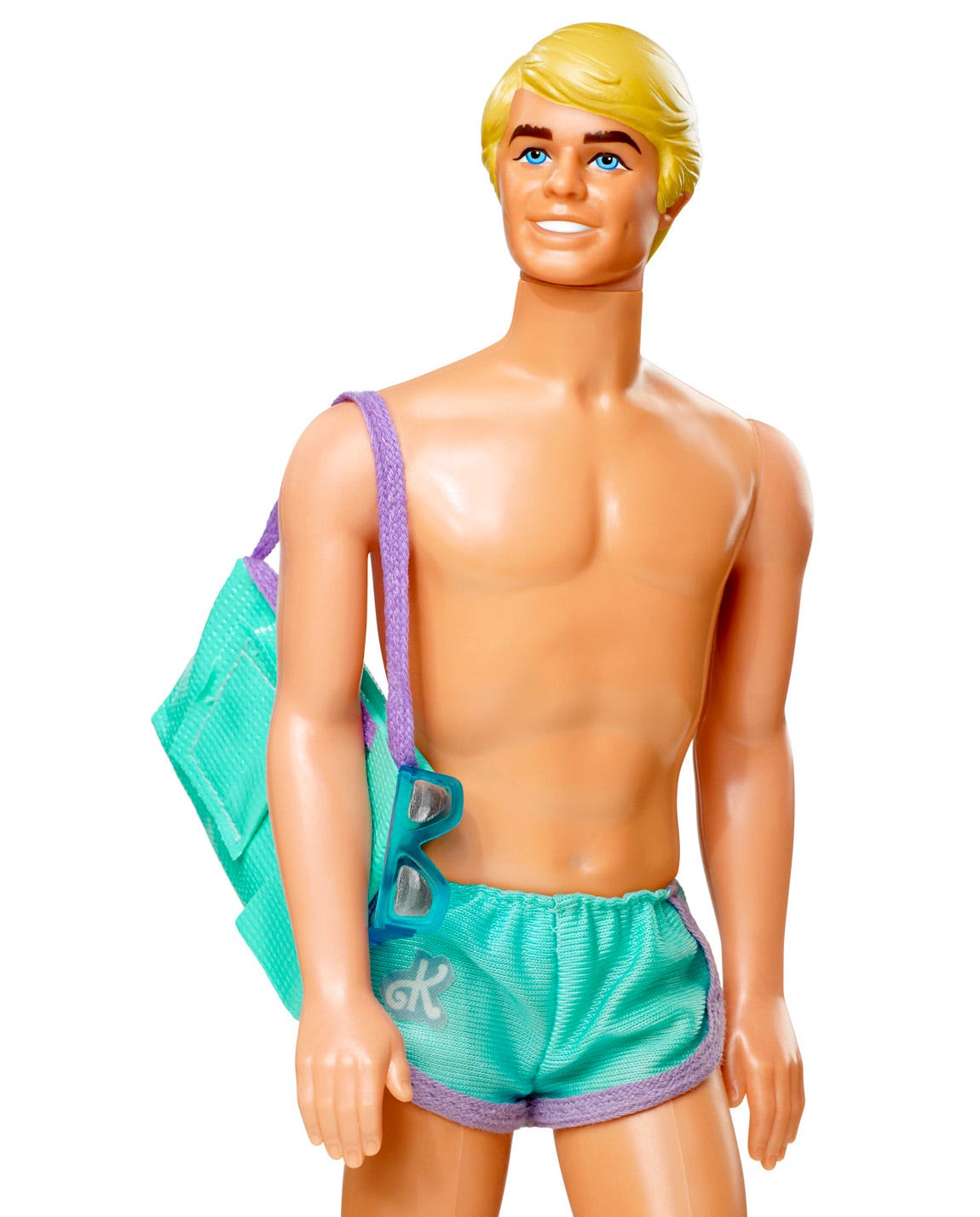 Ken has evolved over this years. This 1979 doll shows him in an updated version of his swimwear debut.

Handler wrote that “he did get a little bump as time went by – but not before our son took a lot of teasing at school.” Gerber similarly wrote that Handler’s son “resented the flat-crotched doll that bore his name.”

Much like Barbie, Ken has evolved over the years.

Towards the end of the sixties, Ken got “a hunkier build, a handsomer face, longer hair, and a healthier skin tone,” Handler wrote in her autobiography. “While people had remarked that our earlier, wimpier Ken looked a lot like Dwayne Hickman of ‘Dobie Gillis’ fame, the Ken of the late 1960s was decidedly more Warren Beatty-ish.”

Since then, dozens of reincarnations of the doll have been released. Recent versions have included long hair, different body types, and varying skin tones.

One of the major debates among Mattel execs during Barbie’s development in the 1950s was how to shape her figure. A major inspiration behind her appearance was Bild Lilli, a character who first appeared in comic strips published by the German tabloid paper Bild Zeitung and was turned into plastic dolls from 1955, with a heart-shaped face, high blonde ponytail, and sharp red pout.

Handler had already known she wanted to create an adult doll for young girls to play with, and in her autobiography she praised Lilli for “the breasts, the small waist, the long, tapered legs.”

“Little girls dream of being curvaceous, dreamy, exciting,” Handler once said, per Gerber. “They want – some day – to have gorgeous clothes, be chic, and look like movie stars.”

Handler also enlisted Dichter’s help in exploring attitudes towards Barbie. After interviewing 191 girls and 45 mothers, he suggested enlarging the doll’s breasts but also downplaying her “sexual overtones” to appeal to mothers, per Gerber.

At the 1959 Toy Fair in New York, where Barbie and her “voluptuous figure” were unveiled to the world, buyers were put off by Barbie’s breasts, Handler wrote. Demand for the doll didn’t pick up until later that summer. 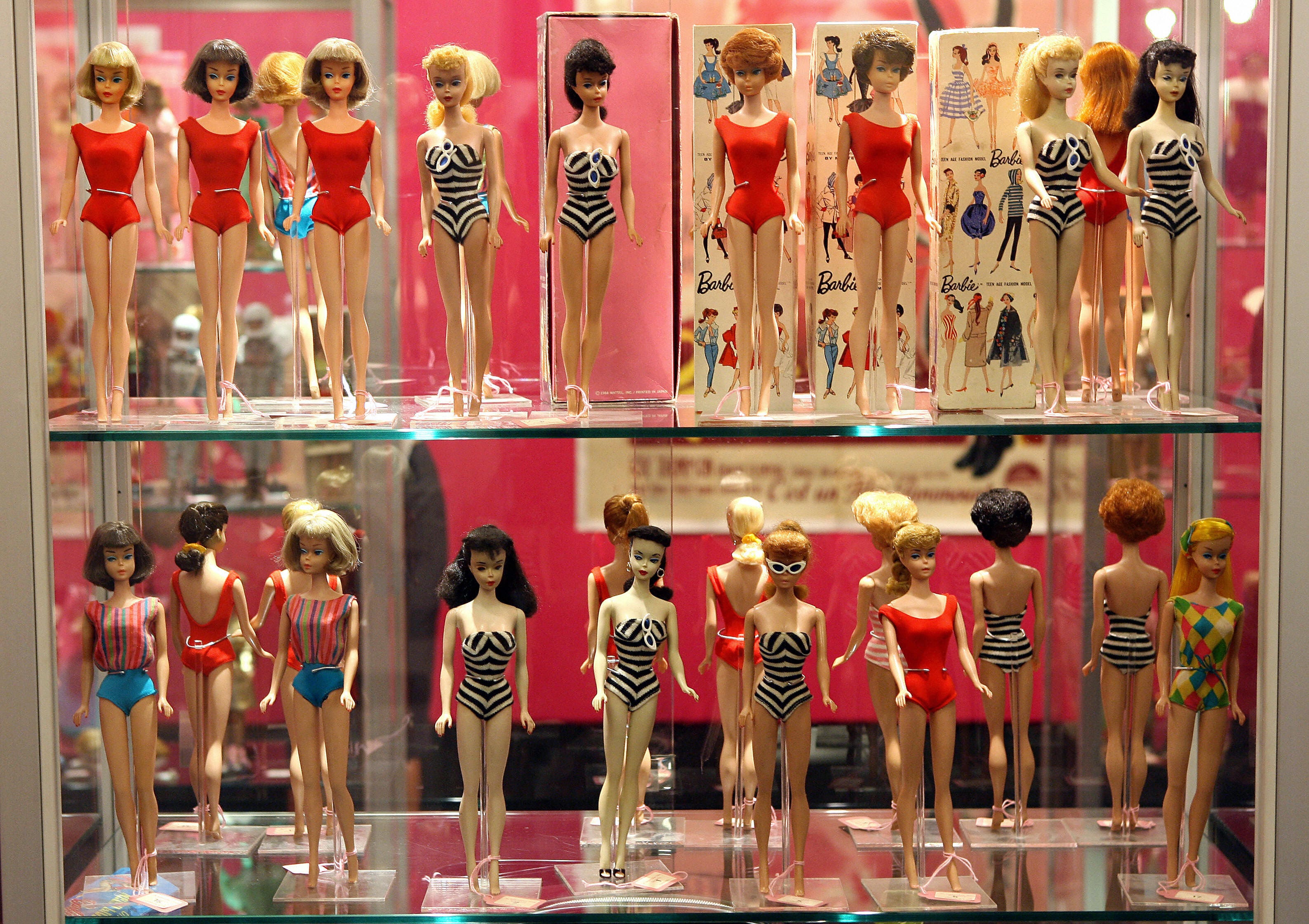 Some of the earliest Barbie dolls made.

“Barbie always followed the trends, she didn’t create them,” Handler wrote in her autobiography. “And her ‘figure’ typified what the feminine ideal was in the late 1950s. Even back then, however, we were getting criticism about Barbie’s big boobs.”

“But Ruth was not political or prone to dwell on the root of cultural standards,” Gerber wrote. “If girls were being told they should wish they were busty blonds, Mattel would profit from that message.” 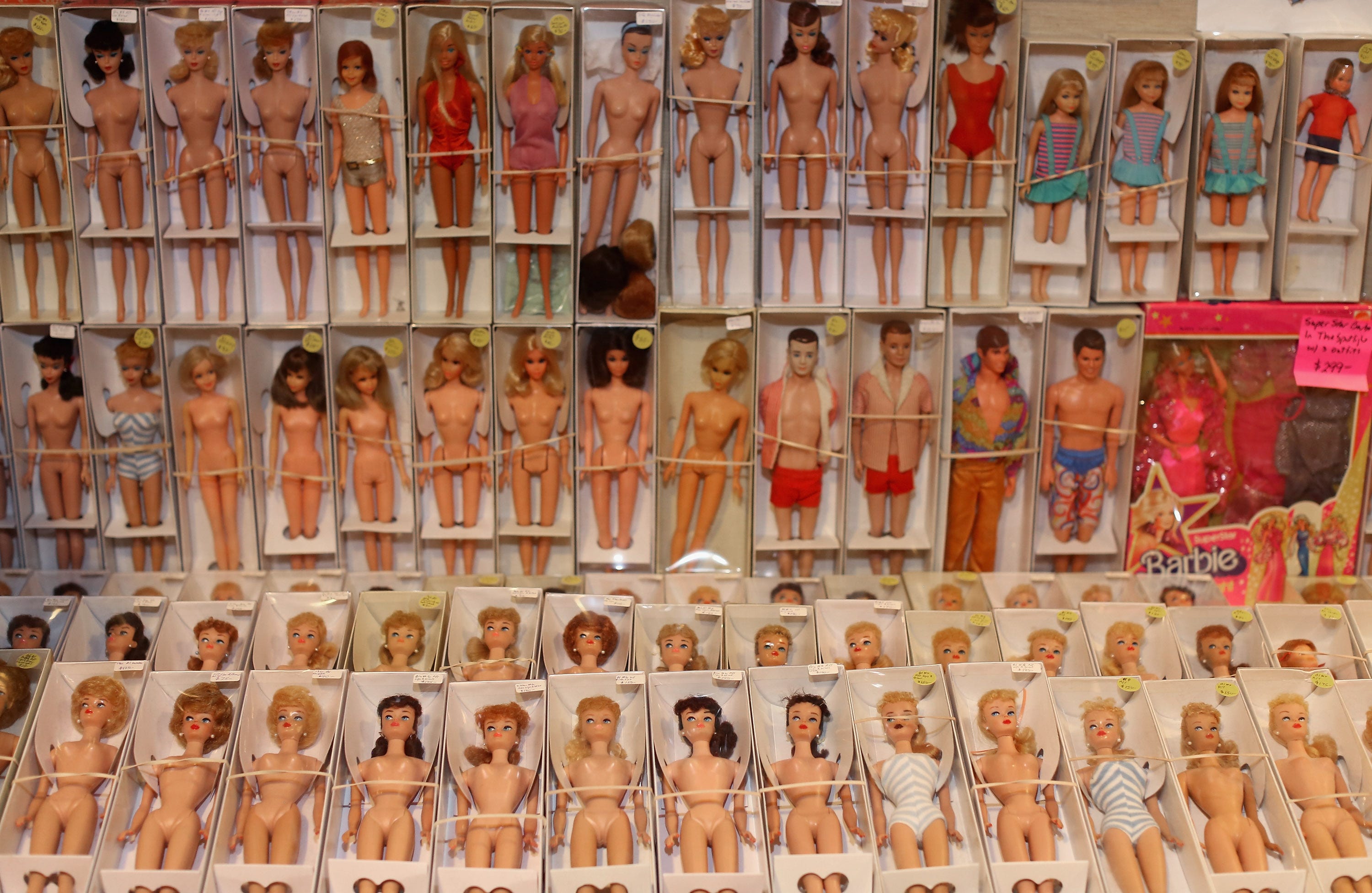 A range of Barbie dolls for sale during the 2015 National Barbie Doll Collectors Convention.

“Ruth had no interest, time, or patience for debates over the political or social impact of products,” Gerber continued. “She had hired Ernest Dichter to tell her how to sell the most Barbie dolls, not how to make the doll a proxy for an emerging feminist version of women.”

“Perhaps Ken’s anatomy would not have been such an important consideration had it not been for the fact that Barbie’s breasts were so fundamental to her appeal,” Schneider wrote.

“Barbie’s prominent breasts are still the lightning rod for controversy; the quandary over Ken was what Mattel gingerly referred to as the ‘bulge’ or ‘bump,'” sociologist Steven Dubin wrote in “The Barbie Chronicles” in 1999.

Over the decades, Barbie’s figure has been the subject of countless debates, with critics arguing that she creates unrealistic beauty standards that could harm the dolls’ young owners. Mattel has launched a range of diverse dolls, including some with wheelchairs, with vitiligo, and in a number of different body shapes. 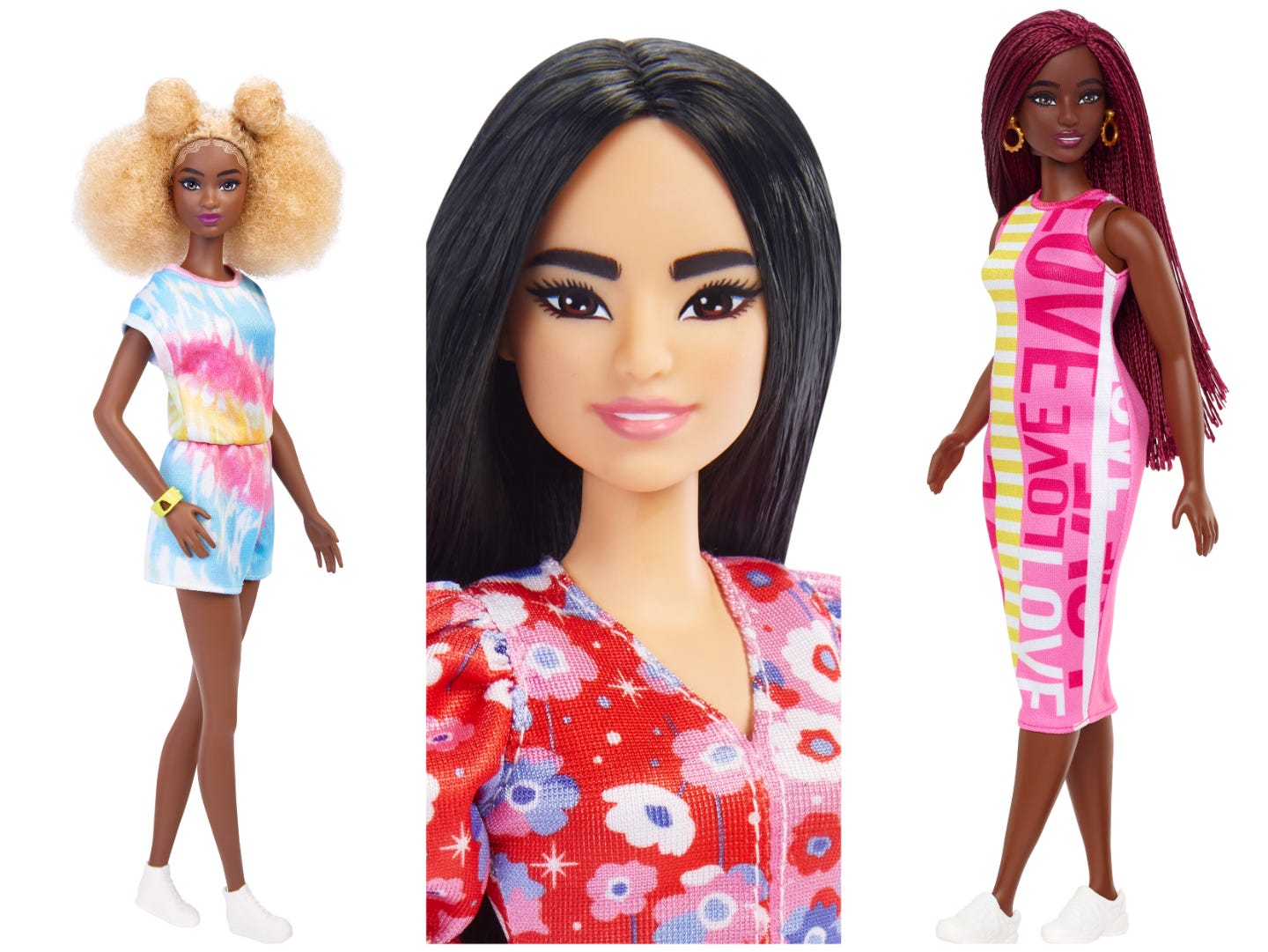 Some of the newest Barbies to hit stores.