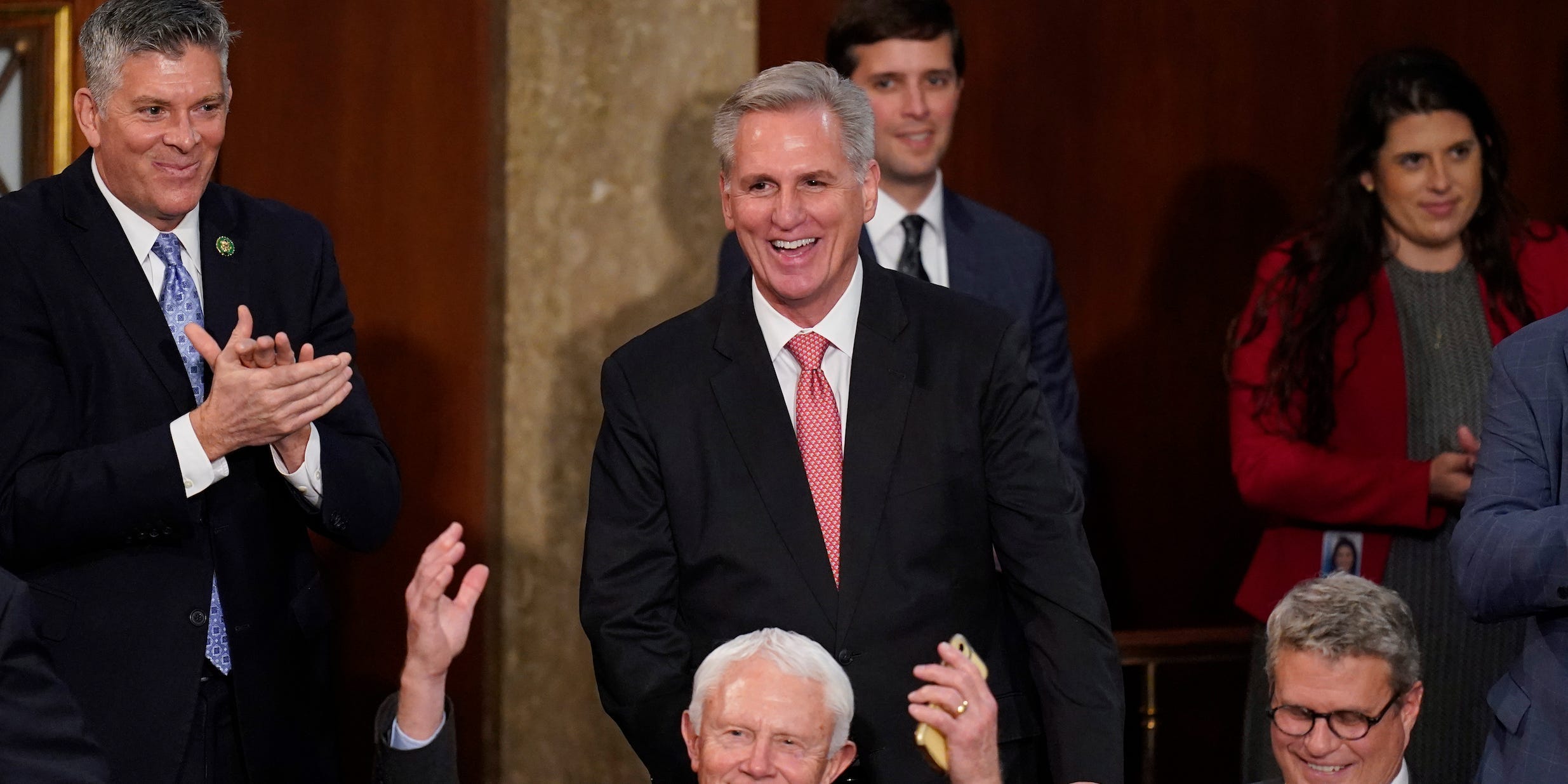 Rep.-elect Kevin McCarthy smiles on the House floor during a speakership vote.

Rep.-elect Kevin McCarthy was elected speaker of the House early Saturday morning, fulfilling a long-held ambition and ending the most chaotic selection of the House’s leader in over a century.

McCarthy clinched the speaker’s gavel after 15 ballots and in the wee hours of the fifth day of voting. His victory was finally secured after days of struggle. At the start of Friday, McCarthy and his allies managed to flip more than a dozen votes to his side, injecting palpable momentum into a candidacy that was sorely lagging.

Leaders then agreed to hold off final votes until Friday evening. The final hours sparked almost Shakespearean scenes on the House floor.

Rep-elect Mike Rodgers of Alabama had to be held back as he appeared to lunge at Rep.-elect Matt Gaetz of Florida who refused to budge from voting “present.” House GOP leaders then scrambled to delay future votes until Monday before abruptly reversing and forcing an immediate 15th vote.

It was never supposed to go this way.

Electing a speaker is normally very straightforward. Before this week, the House had gone an entire century without needing even a second ballot to secure its leader. McCarthy’s victory consumed the most ballots since the end of the Civil War. Part of the lack of recent drama is because previous Congresses hashed out their differences within their parties before the formal floor vote. Lawmakers in McCarthy’s circumstances, carrying a party from the minority to the majority, virtually glide on the spirit of good feelings about retaking the majority.

Faced with disappointing midterms, McCarthy had little margin for error. And after years of stern speakers, average lawmakers have grown restless from being cut out of talks surrounding major legislation. Some of the holdouts also clearly just weren’t that into McCarthy.

The victory celebrations may be short-lived.

In order to secure his position, McCarthy agreed to a rules package framework that will cede significant power to conservative lawmakers who demonstrated for days that they owe nothing to the Californian. One of those concessions, per Politico’s Olivia Beavers, would allow any single lawmaker to essentially call for a no-confidence vote and push McCarthy out of power. The “motion to vacate” has only been voted on once in a century, but then Rep. Mark Meadows’ introduction of it in 2015 set off a chain of events that eventually resulted in then-Speaker John Boehner’s retirement.

According to Bloomberg News, McCarthy also acquiesced to an agreement that would cap future government spending at 2022 levels — meaning the Pentagon would see a roughly $75 billion cut in funding. Any defense spending would require Senate approval, but endangering defense budgets, which most Republicans want to raise even higher, will likely trigger the ire of more establishment-leaning lawmakers. Later in the evening, multiple reports cautioned that the cuts could be shouldered by non-defense programs, though Democrats are unlikely to agree to such cuts.

Later this year, Congress will be tasked with raising the debt ceiling. If lawmakers fail to do so, the US would default on its debt, almost assuredly sending domestic and international markets into a tailspin. The mere threat of breaching the debt ceiling in 2011 led to a historic credit downgrade during the Obama administration.

The reality McCarthy will soon face is that leading a narrowly-divided chamber is incredibly difficult. He’ll also have to grapple with a Democratic-controlled Senate and White House, which will certainly block many conservative priorities. With just five votes to spare, the now-speaker may be forced to rely on House Democrats to pass bills that Congress must act on. But cutting any deal across the aisle could trigger a conservative revolt that could topple McCarthy.