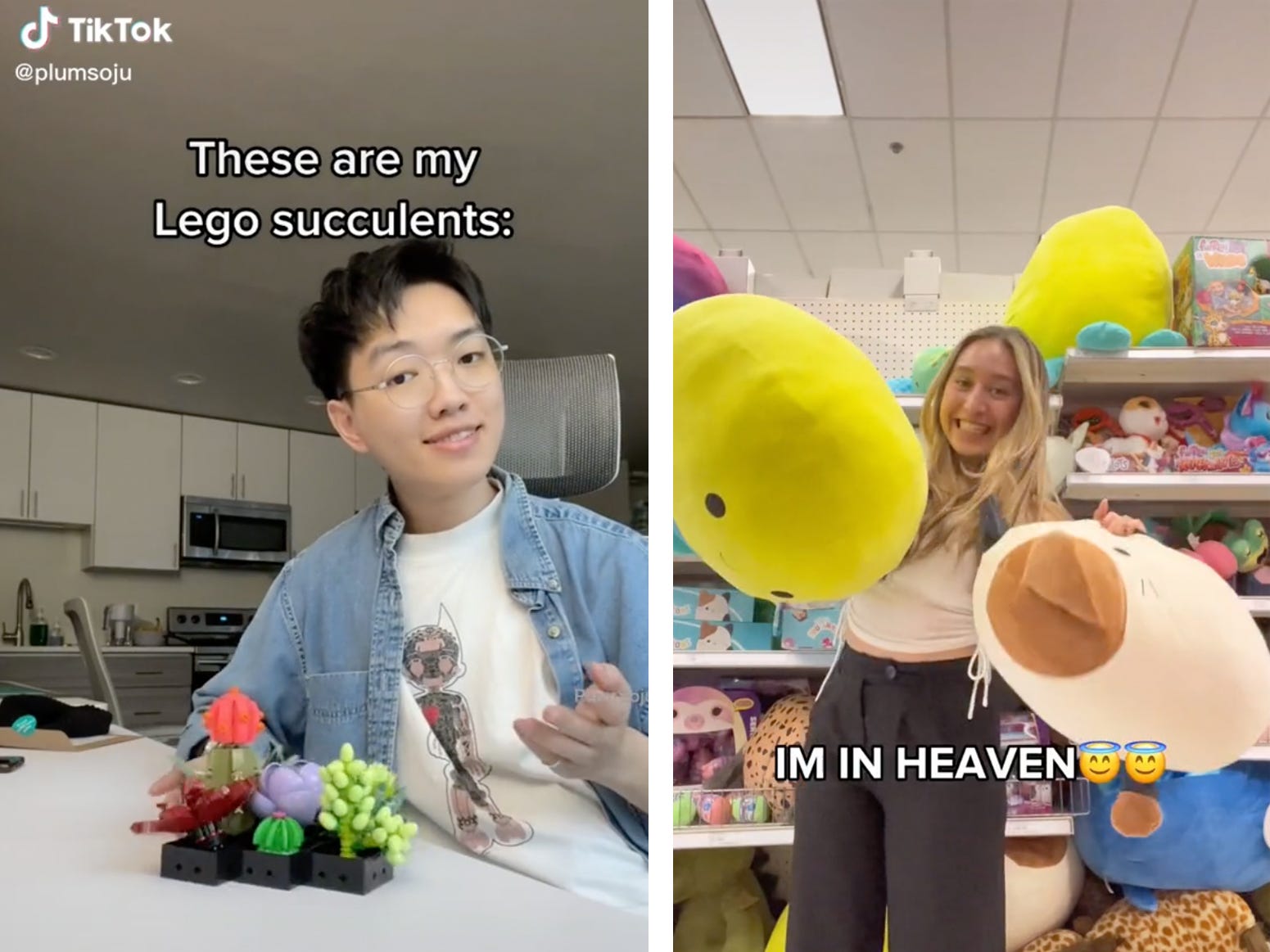 Brands like Lego and Squishmallow are especially popular on TikTok.

Turns out toys aren’t just for kids after all.

The toy sector is experiencing a rise in teenage and adult consumers, who are purchasing nostalgic board game,  craft set, collectible figurines, and plush stuffed animals. This growing cohort of consumers over age 12 has been dubbed “kidults” and now accounts for 25% of toy sales, bringing in an estimated $9 billion a year, according to the NPD Group.

Juli Lennett, NPD Group’s toy industry advisor, told Insider that while older demographics always have been interested in toys, there’s been an “explosion of the adult market” in recent years, a trend she attributes largely to “the pandemic combined with social media.”

“The adult consumer was looking for something to soothe their anxiety and stave off boredom — an adult pacifier, if you will — during these difficult nearly three years,” Lennett said. “And, because they had stopped doing other entertainment activities outside the home at the height of the pandemic, they had the extra money to spend. Now many of them are hooked.”

On social media, platforms like TikTok are playing an increasingly significant role in attracting Gen Z and millennial consumers to everything from Lego floral sets to use as decor for their homes and Squishmallows to adorn college dorm rooms.

“Social media brings together like-minded adults and makes them feel a sense of community for the toys that they enjoy playing with and collecting,” Lennett told Insider. “Social media should continue to be a great place for adults to connect on toys.”

Spotting an opportunity to capitalize, many brands have started doubling down in catering to adult customers. Lego, for example, now has an expansive adult product line featured on its website under the “Adults Welcome” section, which launched in January 2021.

At the time, Lego CEO Tormod Askildsen told Brick Fanatics that sales of Lego products for adults had increased four-fold. Today, Lego now sells 100 adult Lego sets, according to the Associated Press, including a replica of Vincent van Gogh’s Starry Night and a functional roller coaster.

“The wonderful thing about LEGO bricks is that they can be enjoyed by anyone of almost any age,” Lego says on its website, in response to a FAQ about whether it’s “normal” for adults to play with Legos. “We make LEGO sets specifically for adults with more detail, challenging building techniques, and cool ways to display.”

Other brands, like American Girl, have seen an influx of Gen Z and millennial consumers purchasing dolls and visiting its cafes, where they share their experiences on social media. As a result, American Girl cafes recently began selling alcohol and expanding its menu for a mature palette.

Looking ahead, Lennett said she anticipates toy brands will continue to attempt to retain older consumers.

“If the manufacturers can keep kidults interested with new, innovative toys that appeal to this age group, they will continue to buy toys. Some will be successful and others won’t,” she said.

Home » Audio Sources - Full Text Articles » ‘Kidults’ age 12 and up are buying more toys than ever, with teens and adults driving significant growth for the industry thanks to the pandemic and TikTok
a