(JTA) — Just a few years into her comedy career, Lisa Geduldig was invited to perform standup at the Peking Garden Club near Northampton, Massachusetts. She went to the gig assuming it was a comedy club.

“I just had the most ironic experience,” Geduldig remembers telling a Jewish summer camp friend on the phone in October 1993. “I was just telling Jewish jokes in a Chinese restaurant.”

As a Long Island native who was by then living in San Francisco, she was very familiar with the tradition of Jews eating Chinese food on Christmas, a product of the neighborhood dynamics between Jewish and Chinese immigrant populations living in New York’s Lower East Side from the end of the 19th century.

After ruminating on it, she thought: why not start a Jewish comedy night on Christmas Eve?

She had enough time before the holiday to find other Jewish comics who liked the idea, write her own press release and partner with a restaurant in San Francisco’s Chinatown with banquet room space open on Christmas Eve to organize the event, which she called Kung Pao Kosher Comedy. (Geduldig liked the alliteration, even though it doesn’t involve kosher food.)

It was an instant hit, with around 400 guests, and Geduldig said nearly 200 people were turned away at the door. The kitchen of the Four Seas Restaurant was completely unprepared for the volume, as Geduldig didn’t expect anything close to the turnout. The show received a heap of local press, and the next year it earned a three-quarter page spread in The New York Times.

Fast forward and this year marks the 30th Kung Pao Kosher show, and the first one back in person since the COVID-19 pandemic. This time, the event has moved into a synagogue — the Reform Congregation Sherith Israel in the Pacific Heights neighborhood, one of the country’s oldest Jewish houses of worship. The Chinese banquet room at New Asia Restaurant, where the show had been hosted since 1997, became a supermarket in 2020.

Over the years, an impressive roster of comedians has performed, including names such as Marc Maron, Margaret Cho, Shelley Berman, David Brenner, Judy Gold, Gary Gulman and Ophira Eisenberg. Many of the show’s comedians return — Wendy Liebman, who has been doing standup for 38 years, has performed at Kung Pao four times.

Geduldig said the show that put her project on the map was when well-known Jewish comedian Henny Youngman headlined the show in 1997, at 92. Youngman — famous for his quick succession of clever one-liners and interludes from his favorite prop, a violin — died of pneumonia just two months after giving his final performance at Kung Pao Kosher Comedy. For six months after Youngman’s death, Geduldig and other Kung Pao promoters and staff were convinced that they killed him. The SF Weekly published an article titled “The Gig of Death?” But Youngman’s daughter, Marilyn Kelly, exonerated everyone involved in the show, saying the travel was a strain on her father’s health, but he was “delighted to have done it.”

Ten years after Youngman’s final performance, Shelley Berman, then in his 80s, was scheduled to perform at Kung Pao when he called Geduldig complaining of chest pains.

It turned out to be just acid reflux, and the emergency room doctor told Berman he could go onstage. (The doctor was extended an invitation to the show, but did not attend.)

In keeping with the Jewish tradition of social responsibility and tzedakah, meaning “charity” or “justice,” Geduldig has given a portion of the proceeds from ticket sales each year to two different charities. Past beneficiaries include a variety of Jewish and secular organizations; this year, the charitable proceeds will go to the San Francisco-Marin Food Bank and The Center for Reproductive Rights.

The charitable aspect is part of what keeps Shelley Kessler, a long-time California labor leader, coming back to the show. She has yet to miss a single one.

“Given what’s going on in the world, this is a very nice way to manage the depression,” Kessler said.

At Kessler’s table, her core group of five always bring tchotchkes and booze — though the synagogue has asked this year’s guests to refrain from red wine, to avoid any accidents on the carpet.

“People bring all kinds of things,” Kessler said. “We once had a humongous menorah. Our table has fun, I’ll tell you.”

Joining Kung Pao on the virtual stage for the third time is Geduldig’s mother, Arline Geduldig, 91, who will Zoom in from Boynton Beach, Florida.

“One of the silver linings of the pandemic was not only living with my mother, but getting to know each other, finding out how funny she was,” Lisa Geduldig said.

In March 2020, the younger Geduldig flew to Florida to visit her mother — and stayed there for 17 months. That was when she launched Lockdown Comedy, a monthly online comedy show where Arline got her start, thanks to some mentoring from her daughter. Arline’s routines are often centered around her fascination with handsome young firemen and the way she calls her husband, Irving, downstairs for dinner.

“I love people saying they like me,” Arline told the Los Angeles Times in 2021. “I have a swelled head already.”

In previous years, Geduldig said she tried to turn “a Chinese restaurant into a synagogue.” She brought inflatable dreidels, giant matzah ball pillows and “Happy Hanukkah” banners, when Hanukkah and Christmas overlapped. Things are trickier now, since she wants to avoid any cultural appropriation while still paying tribute to the show’s origins. For instance, she learned that red paper lanterns are symbolic of good luck in Chinese culture, so she wants to incorporate some into the room. 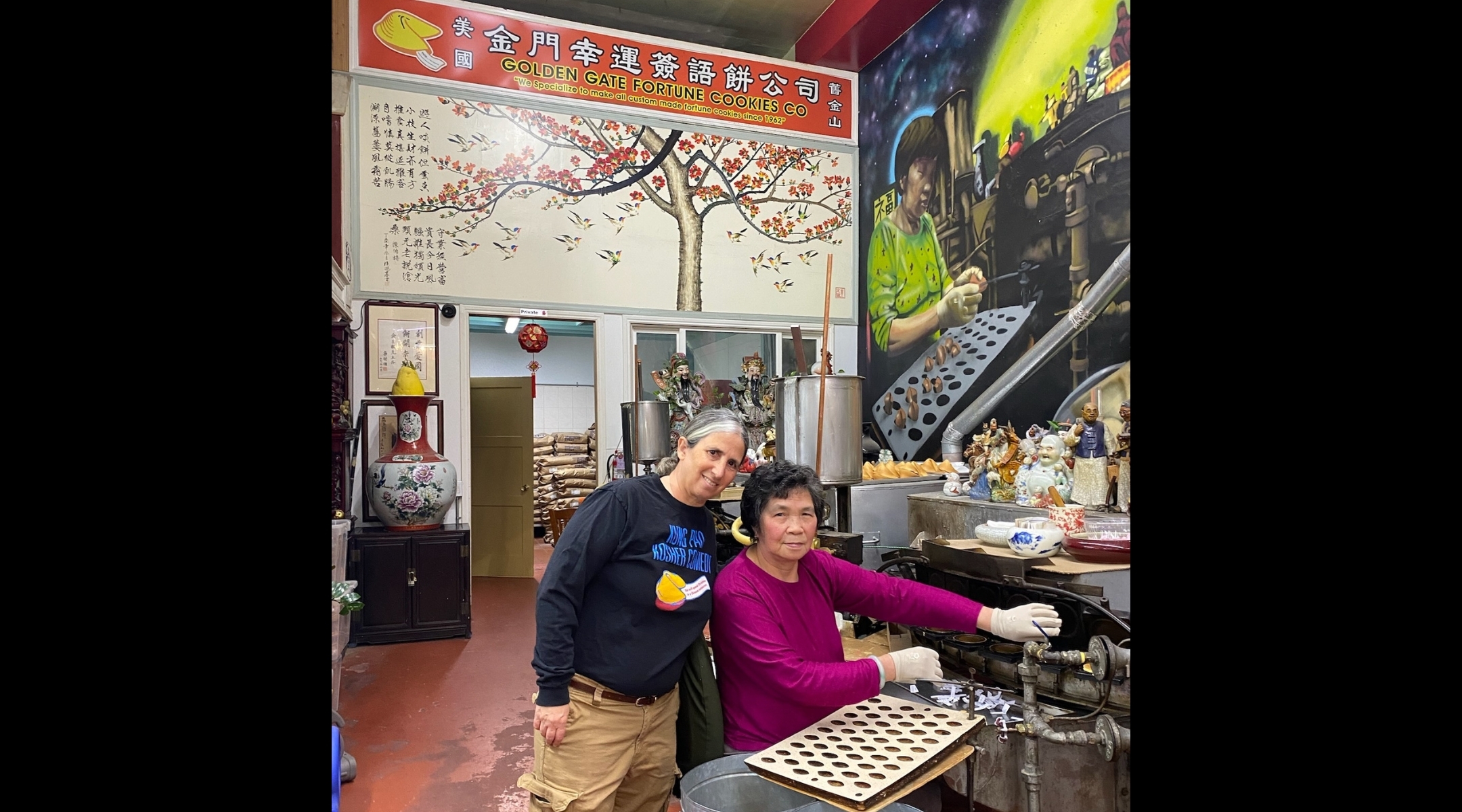 The restaurant that the show was held in became a supermarket during the height of the COVID-19 pandemic. (Courtesy of Lisa Geduldig)

“This year, I’m turning a synagogue into a Chinese restaurant,” she said.

Although the food will still be provided by a local Chinese restaurant, the usual fortune cookies filled with Yiddish proverbs will not be included. The food isn’t kosher, but because the event is being held in a synagogue there are still restrictions: No pork and no shrimp, despite Geduldig’s 30-year streak of serving treif (or non-kosher) food at Kung Pao Kosher Comedy.

“I was like, ‘How about if I call it kosher prawns?’” Geduldig joked. “They didn’t go for it.”

The post How a standup show at a Chinese restaurant turned into a 30-year Jewish comedy tradition appeared first on The Forward.