LOS ANGELES (AP) — The City Council was disrupted Tuesday by another round of boisterous, foul-mouthed protests after a councilman facing widespread calls to resign for his involvement in a racism scandal defiantly returned to the chamber and took his seat.

Councilman Kevin de Leon’s appearance prompted some council members to walk out amid shouting and chanting from rival groups in the audience, while council President Paul Krekorian ordered a recess amid the outburst.

The turmoil represented a reprise of a Friday meeting where de Leon appeared in the ornate chamber for the first time since mid-October. He is the only council member involved in the scandal still resisting calls from President Joe Biden to step down, while continuing to collect his annual salary of nearly $229,000 — among the most lucrative paydays for city council members in the nation.

Protesters were shouting and waving signs in the audience throughout the meeting. During a public comment period, most of those who spoke denounced de Leon as a racist and called on the councilman to resign, but some supporters defended him and lauded his work in his district, which includes downtown Los Angeles and the heavily Latino Boyle Heights neighborhood.

The continuing disruptions turned the meeting at times into a veritable Theater of the Absurd, with protesters screaming profanities, city staffers pleading for calm and police evicting some protesters who refused repeated orders to settle down.

When de Leon appeared about midway through the meeting, more shouting ensued, some council members immediately left the room and Council President Paul Krekorian quickly called a recess. The council later resumed business, enacting Mayor Karen Bass’ signature proposal declaring a state of emergency for homelessness that she promised to propose on her first day in office. 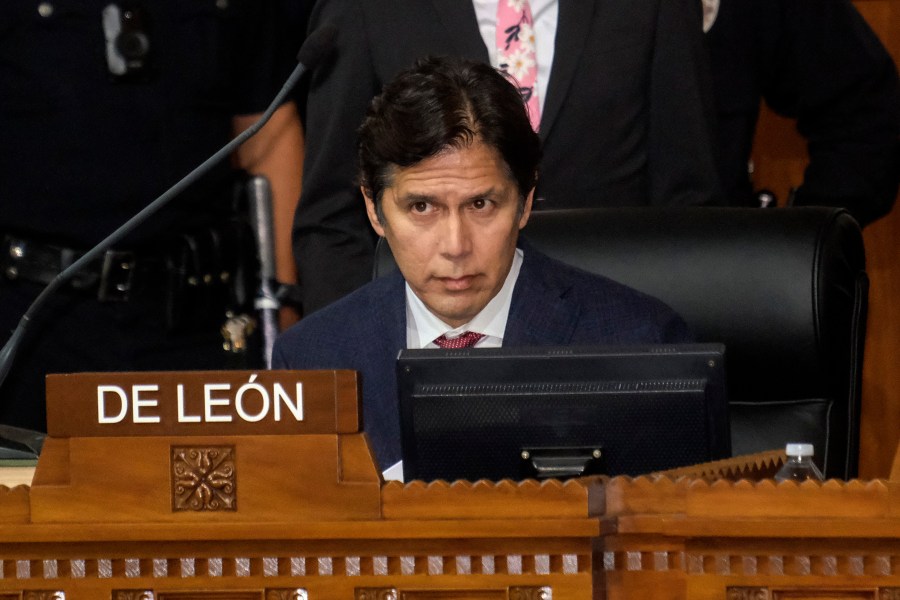 “This is a monumental day for the city,” Bass said in a statement after the vote. “This declaration will enable us to move faster and unlock every tool possible” to take on the crisis, with over 40,000 unhoused people living in tent encampments or rusty RVs that have spread into virtually every neighborhood.

The scandal was triggered by a leaked recording of crude, racist comments from a year-old meeting involving de Leon, then-council President Nury Martinez, labor leader Ron Herrera and then-Councilman Gil Cedillo — all Latino Democrats — in which they plotted to expand their political power at the expense of Black voters during a realignment of council district boundaries.

Martinez and Herrera resigned within days of the disclosure of the recording, and Cedillo vanished from public sight. Cedillo’s term ended Monday after he lost a reelection bid earlier this year, leaving de Leon as the only person involved in the scandal still holding his job.

It remains unknown who made the recording that was posted on a website, or why.

De Leon has apologized repeatedly but said he will not resign. He argues that he wants to continue working on homelessness, fallout from the pandemic and the threat of renter evictions in his district.

There is no legal avenue for his colleagues to remove him — the council can only suspend a member when criminal charges are pending.

Stripped of his ability to participate on council committees, facing widespread pressure to resign and after an extended absence from council meetings, de Leon has been maneuvering to return to the public sphere, despite being reviled by colleagues who say they cannot work with him.

Last week, he scuffled with an activist who heckled him at a holiday toy giveaway.