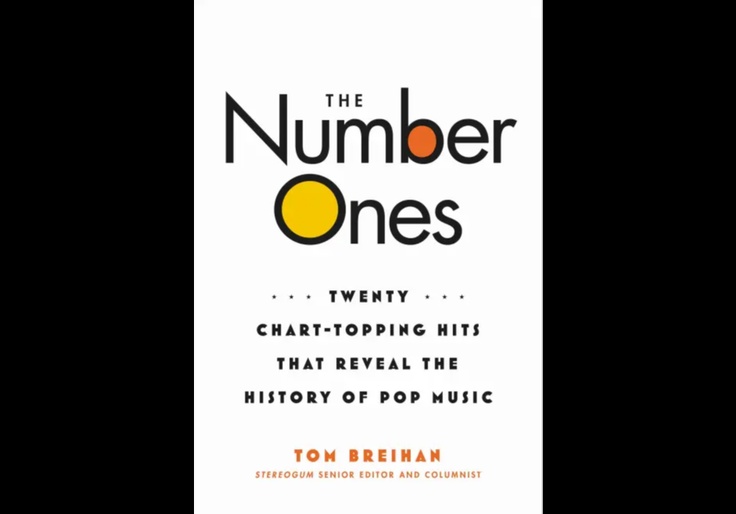 Pop music has always been plagued by insecurity. A four-minute song—even one with the biggest of hooks—doesn’t feel like an artistic achievement on par with a great novel or an epic film. The resulting inferiority complex often leads pop acts to go to ridiculous lengths to be taken seriously (let none of us forget that U2 once attempted to coin the portmanteau “refujesus”).

An even deeper status anxiety, however, is often found with pop critics. Page through any “Best Albums of the Year” list and chances are you’ll never have heard of 80 percent of the acts. The odds are good, however, that there will be an obscure folk/metal trio from a former Soviet Bloc country. The subtext is clear enough: If it’s popular it can’t be good, and if it’s good it can’t be popular.

That’s why The Number Ones, the new volume from Tom Breihan, senior editor of the music blog Stereogum, is such a tonic. Breihan understands that the most important fact about pop music is embedded in its name: People like it. He does too.

In 2018, Breihan began writing a weekly column reviewing every song that’s hit #1 on the Billboard Hot 100 since the chart’s inception in 1958. It’s a dizzying journey across genres and one that he approaches free of the typical critic’s pretension. This is one of the few music writers who can still come off hip while telling readers that they probably don’t give disco enough credit.

The Number Ones features 20 of these essays, spanning from Chubby Checker’s 1960 chart-topper “The Twist” to BTS’s 2020 hit “Dynamite.” The organizing theme of the collection is that the songs chosen for inclusion represent inflection points in the history of pop, and, with only a few exceptions, it’s a persuasive thesis. The chapter on Fleetwood Mac’s “Dreams” has more to do with the world-conquering success of the band’s Rumours album than the song itself. The section on “When Doves Cry” is largely an excuse to talk about how cool Prince was, an indulgence that can be forgiven only because it gives us Breihan’s characterization of The Purple One as an “unknowable f**k-sphinx” (give him the Pulitzer now).

The Number Ones succeeds in large measure because it takes its subject matter more seriously than pop’s detractors but less seriously than its monomaniacal fanboys. Breihan mostly avoids, for example, the pathology of ascribing huge cultural change to individual songs or artists, a trend that tends to burden the medium with more weight than it can bear. The closest he gets to a Talmudic reading of any of these numbers is an attempt to find more meaning in Bob Dylan’s lyrics for “Mr. Tambourine Man” than is likely there, but that too can be forgiven. If you’re not overreading Dylan, you’re probably not fit to be a music critic.

Breihan’s most interesting choice is to assemble the collection as more or less a pure anthology, with only modest efforts made to identify overarching themes in the 60 years of pop under consideration here. That may be a disappointment to casual readers (though the anecdotes in each individual chapter are so good that they may not even notice), but it’s a reward for the engaged pop aficionado who can track the clues across chapters.

Among the recurring trends: Artists tend to be bad at knowing when they’ve got something special on their hands. When Carole King and Gerry Goffin first presented The Shirelles with “Will You Love Me Tomorrow,” the group’s Shirley Owens dismissed it as too country-inflected. Michael Jackson actually thought he flubbed the moonwalk during his now-legendary performance on Motown’s 25th anniversary special. Diana Ross so hated the mumbling, understated way she was asked to record the vocals for “Where Did Our Love Go” that she recorded it “in a sarcastically blank-faced deadpan, locking eyes with [writer Eddie Holland] the entire time.”

Another recurring theme—perhaps the central insight of the book—is that pop is omnivorous. The inflection points that Breihan points to are not moments when a new style of music suddenly leaps into the public consciousness fully formed. Rather, they are almost always moments when a genre that has long been developing in isolation suddenly fuses with mainstream sensibilities to generate crossover appeal. Prior to Bon Jovi’s “You Give Love a Bad Name,” Top 40 radio tended to abjure ’80s power-chord driven rock on the theory that its appeal was limited to working class men. Rap struggled to break through on the singles charts before M.C. Hammer and Vanilla Ice because DJs at more mainstream stations feared its confrontational style would alienate the audience.

While Breihan chooses not to saddle the book with a grand unified theory of pop, it’s nevertheless difficult to make your way through the essays without concluding that this is a story of decline. In the earlier chapters, we are present for the creation of Motown, folk rock, and hip-hop. By the time we near the book’s end, the big innovations are Puff Daddy using sampling as a way to self-consciously draft off of previous hits, “Black Beatles” establishing viral memes as a road to pop stardom, and T-Pain introducing the now ubiquitous use of Auto-Tune (an innovation that led Usher to pull him aside on a plane and tell him that he had ruined music).

Indeed, readers may come away nostalgic for the pre-digital era. While there are obvious upsides to today’s decentralized musical marketplace—far more acts in far more genres now have a legitimate shot at building an audience—there were real benefits, musical and social, to the era in which popular music had to bend to the sensibilities of a common culture. The founder of Motown Records, Berry Gordy, built his empire around the notion that, because Baby Boomers were less race-conscious than any previous generation of Americans, the public was ready for a fusion of black and white musical styles. For proof, he had to look no further than what had already happened in pop. As Breihan notes in his insightful chapter on “Will You Love Me Tomorrow,” it’s “the sort of song that could only be possible in an environment where cultures freely intermingle. A young Jewish couple writes a song for a young Black girl group, combining string orchestration with doo-wop vocals over a Spanish beat. A Black man produces it, and a middle-aged Jewish woman releases it on her label.”

It’s those kinds of insights that make The Number Ones an absolute delight. Breihan is just as capable with big-picture analysis as he is with the trivia that’s judiciously distributed throughout the book. How many readers know, for instance, that Chubby Checker’s stage name was a play on Fats Domino, an artist he had come of age impersonating? Or that Eric Clapton, by suggesting the Bee Gees move to Miami, is arguably responsible for the group’s turn toward disco? Or that the writer of “You Give Love a Bad Name” lifted the melody for the chorus entirely from a Bonnie Tyler song he had previously penned?

Attempts to take pop music seriously too often wind up ruining its central appeal: Pop is fun. So is The Number Ones, which deserves a place on the bookshelf of every music fan.

The Number Ones: Twenty Chart-Topping Hits That Reveal the History of Pop Music

Troy Senik is a former presidential speechwriter and the author of A Man of Iron: The Turbulent Life and Improbable Presidency of Grover Cleveland.