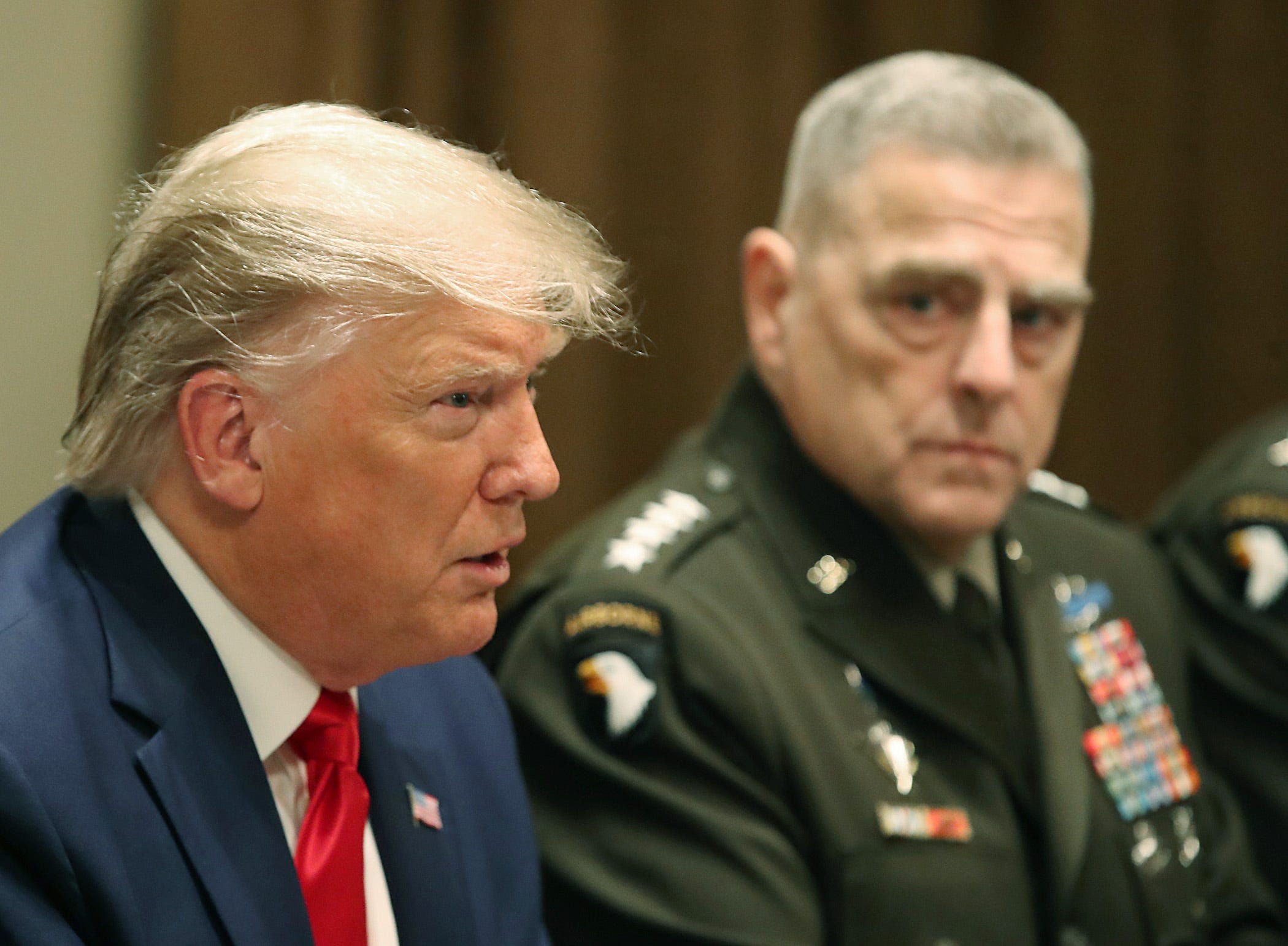 U.S. President Donald Trump speaks as Joint Chiefs of Staff Chairman, Army Gen. Mark Milley looks on after getting a briefing from senior military leaders in the Cabinet Room at the White House on October 7, 2019.

Gen. Mark Milley said there were discussions about retaliating against retired military officers who wrote critical op-eds about former President Donald Trump, according to testimony released by the January 6 committee.

Milley has served since 2019 as the chairman of the Joint Chiefs of Staff, the top military adviser to the president, after being nominated by Trump. His testimony, taken on November 17, 2021, was among a trove of documents released Sunday by the House committee investigating the Capitol riot.

Democratic Rep. Elaine Luria asked Milley if he had considered addressing Michael Flynn, the retired general who served as Trump’s national security adviser and later called for the US to have a coup like Myanmar after Trump left office.

Milley responded by saying he was concerned about the politicization of the military, and that the issue had come up during the Trump administration after op-eds written by retired military officers were “very critical of then President Trump.”

“And there was actually discussions with me: Bring him back on Active Duty, court-martial him, you know, make him walk the plank sort of thing, right? I advised them not to do that, because that would further politicize, in my personal view,” Milley said, adding he would also advise caution in addressing Flynn.

Milley did not specify which retired military officers were considered for court-martialing, but several wrote critical op-eds of Trump during his time in office. Some were published in 2020 in response to Trump’s handling of civil unrest that occured after the murder of George Floyd, including his walk from the White House to St. John’s Episcopal Church after law enforcement was used to disperse peaceful protesters.

Retired Marine Corps Gen. John Allen wrote a scathing commentary for Foreign Policy, saying the president “threatened to deploy the U.S. military against American citizens.” Navy Adm. Mike Mullen said in The Atlantic he was “sickened” to see security personnel “forcibly and violently” removed protesters from Lafayette Square and that Trump had “laid bare his disdain for the rights of peaceful protest.”

Milley, who also apologized for his role in Trump’s photo op at the church, also testified that while he was worried about the “broader implications” of politicization of the military, taking action against retired officers who speak out shouldn’t be done lightly.

A representative for Trump did not immediately respond to Insider’s request for comment.