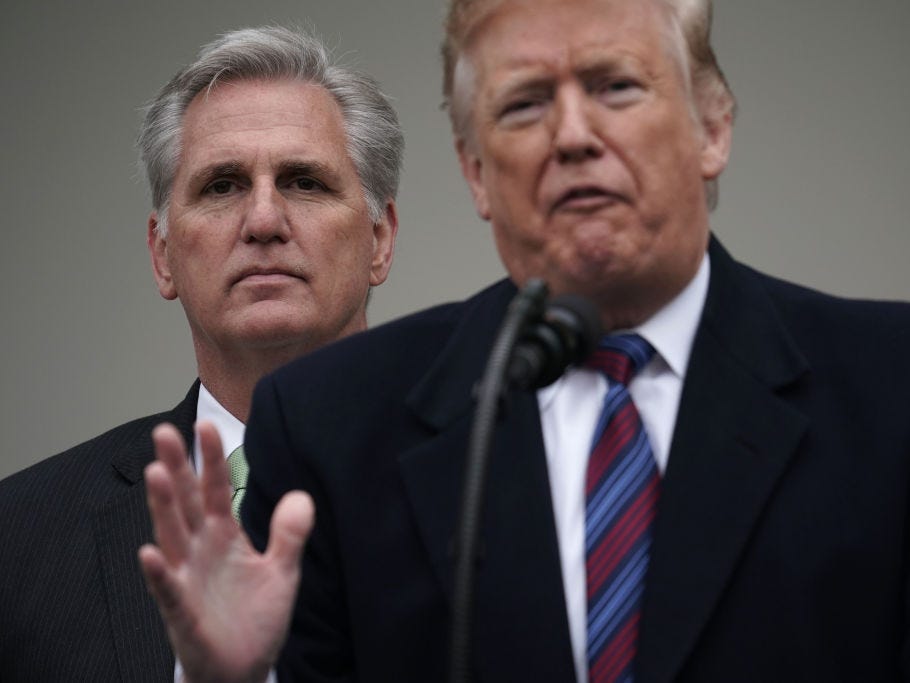 President Donald Trump (R) speaks as he joined by House Minority Leader Rep. Kevin McCarthy (R-CA) (L) in the Rose Garden of the White House on January 4, 2019 in Washington, DC.

A week of House speaker chaos revealed one thing about Donald Trump: He can’t get his MAGA house in order.

His staunch allies’ repeated rejections of Republican leader Kevin McCarthy as the new House speaker, over multiple days of voting, further exposed the outer reaches of the former president’s power over his own movement. If McCarthy squeaks through as speaker, the wild process still looked terribly ugly for the institution, Republicans — and Trump.

Trump made overtures to the faction opposing McCarthy, who Trump has called “my Kevin.” They didn’t listen. With more than a dozen votes, they responded to “my Kevin” with “never Kevin,” making this the most contested speaker race since 1821.

“He is losing them. Finally,” said criminal defense attorney Ron Filipkowski, a former Republican who monitors Trump’s base online.

Even Trump’s former Interior Secretary Ryan Zinke agreed on “CNN Tonight” that Trump’s influence over Republicans is “absolutely” waning after his McCarthy endorsement failed to win more votes for him.

House dissidents have opposed McCarthy over issues having nothing to do with Trump. They want more power for rank-and-file members and an easier way to remove the speaker. And they just don’t trust McCarthy.

But their opposition to him is also an embarrassing blow to Trump, who put his waning political capital on the line for the California Republican and failed to force his MAGA followers to fall in line.

“REPUBLICANS, DO NOT TURN A GREAT TRIUMPH INTO A GIANT & EMBARRASSING DEFEAT. IT’S TIME TO CELEBRATE, YOU DESERVE IT,” Trump wrote on his platform, Truth Social, on Wednesday.

His plea made no difference, failing to move any votes.

At one point, he tried to spin the loss as a “VICTORY” because he said the numerous votes made the “position & process of getting to be Speaker BIGGER & MORE IMPORTANT.”

The drama started on Tuesday, and it wasn’t until Friday that McCarthy managed to make headway in flipping members’ votes. At its worst point for McCarthy, 20 Republicans opposed him and one voted “present.” But by the end of the week, only seven Republicans were voting “no.”

Rep. Lauren Boebert of Colorado was among them.

“Let’s stop with the campaign smears and tactics to get people to turn against us, even having my favorite president call us and tell us ‘We need to knock this off,'” Boebert said on the House floor on Wednesday.

“I think it actually needs to be reversed,” she continued. “The president needs to tell Kevin McCarthy that, ‘Sir, you do not have the votes, and it’s time to withdraw.'”

Rep. Matt Gaetz of Florida defied Trump by twice nominating the former president for speaker. But he was the only Republican to vote for Trump.

On Wednesday, Gaetz told Fox News Digital that Trump’s endorsement of McCarthy made no difference to him.

“Sad!” Gaetz said in Trump-style statement. “This changes neither my view of McCarthy, nor Trump, nor my vote.”

Trump, now a 2024 presidential candidate, endorsed 80% of the anti-McCarthy camp ahead of the 2022 midterms, leaving only Rep.-elects Andy Biggs of Arizona, Andy Harris of Maryland, Chip Roy of Texas, and Keith Self of Texas to fend for themselves.

The former president’s calls to rally behind McCarthy must have rang hollow to congressional newcomers Reps.-elect Andy Ogles of Tennessee, Anna Paulina Luna of Florida, Josh Brecheen of Oklahoma, and Self — all of whom voted squarely with the anti-McCarthy bloc until Friday afternoon. Rep.-elect Eli Crane of Arizona remained with the rebels through the thirteenth speaker ballot.

Rep.-elect Cory Mills, a freshman who has consistently backed McCarthy, said he appreciates vigorous debate — “I’m fine with democracy. It’s messy sometimes, but it’s the way to go,” he said just off the House floor — but he chided colleagues who he suspected were obstructing Trump’s America First agenda for their personal gain.

“If the major concern is your position, your committee assignment, the title you carry, that’s self above country,” Mills said.

The brazen defiance of Trump’s wishes from his supporters extended outside the Capitol. The dissidents have the support of the Conservative Action Project, group of activists and organizations that includes Ginni Thomas, Supreme Court Justice Clarence Thomas’ wife. They blasted McCarthy in an open letter on Wednesday and encouraged more Republicans to join his opponents.

Some anti-McCarthy Republicans on Friday met at the offices of the Conservative Partnership Institute, which is run by Trump’s former White House chief of staff Mark Meadows and former Sen. Jim DeMint, Yahoo News reported.

As rebel Republicans nominated other anti-McCarthy members, 212 Democrats, now the minority party, consistently voted for Democratic Leader Hakeem Jeffries of New York. “He does not grovel to or make excuses for a twice-impeached, so-called former president,” said Rep. Pete Aguilar, House Democratic Caucus chair, in an apparent dig at both Trump and McCarthy.

‘He still has the power to destroy’

Trump, himself, has been flailing as he faces mounting legal challenges. Republicans blamed him for their midterm losses. Most Americans — 55% — have an unfavorable opinion of him, according to a FiveThirtyEight polling average. When he invited journalists to a “media availability” at his Mar-a-Lago residence in Florida on New Year’s Eve, no cable news networks covered it, according to Raw Story.

“Trump is not irrelevant, because he still has the power to destroy,” Charlie Sykes, editor of The Bulwark, wrote on Thursday. “A single statement on his fail-site could kill all of McCarthy’s ambitions.”

But Sykes wrote that his “shrunken clout was remarkably obvious” during events in the House. “Trump threw his weight behind His Kevin, only to be blown off by his most loyal supporters,” he added.

Filipkowski told Insider that MAGA House members are “just yawning and rolling their eyes” because “they know he’s lost the plot” while staying “isolated” at Mar-a-Lago and “surrounded by ‘yes’ men.”

What Trump says matters because if he withdrew his support, McCarthy “would be toast,” Filipkowski said, but his word doesn’t weigh as much as it did before his midterms disaster. House members who are responding to the MAGA base have no reason to fear Trump on this, he said.

“They have the voters on this, not him,” Filipkowski said.