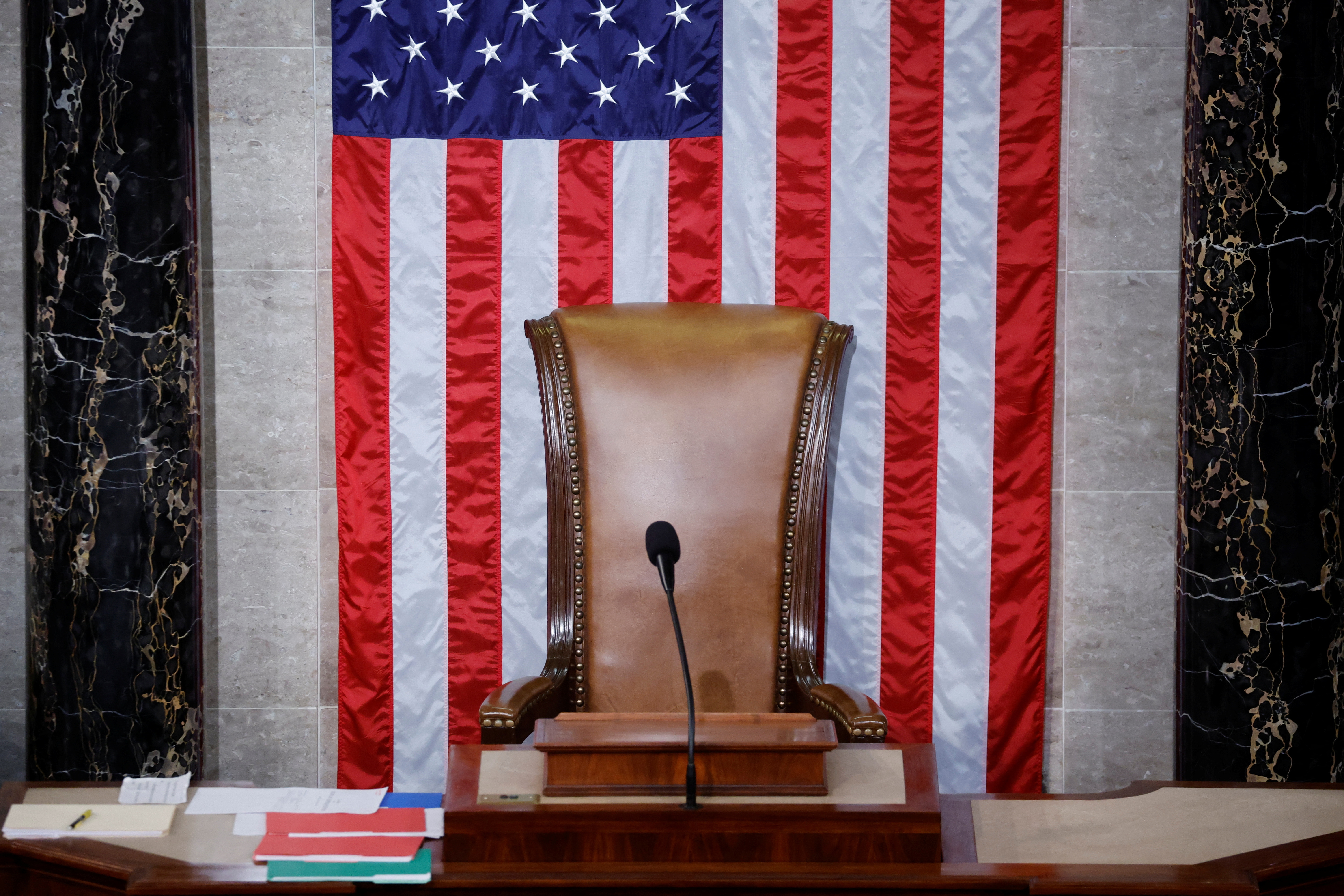 The chair of the Speaker of the House sits empty for a third straight day as members of the House gather for another expected round of voting for a new Speaker on the third day of the 118th Congress at the U.S. Capitol in Washington, U.S., January 5, 2023. REUTERS/Jonathan Ernst

Republican Kevin McCarthy on Friday said he expected to pick up additional votes from some 20 right-wing hardliners in the U.S. House of Representatives who have blocked his speakership bid over four days of congressional dysfunction not seen since 1859 before the U.S. Civil War.

“Watch here and you’ll see some people who have been voting against me voting for me,” McCarthy, 57, said before the House opened a 12th round of roll-call voting on his leadership bid.

Despite his optimism, some fellow Republican lawmakers said they did not expect him to garner enough additional votes from the 20 hardliners to ensure a majority that so far has eluded him in 11 failed votes.

“We still have a ways to go,” Republican Representative Ralph Norman, a McCarthy opponent, told reporters late on Thursday.

Republicans’ weaker-than-expected performance in November elections left them with a narrow 222-212 majority and gives outsized power to the 20 right-wing hardliners who oppose McCarthy’s leadership.

They have railed against McCarthy, who has led the Republicans in the House since 2019, accusing him of being soft and too open to compromise with President Joe Biden and his Democrats, who also control the U.S. Senate.

McCarthy already has agreed to limit his clout and make him vulnerable to new leadership challenges. Some of the hardliners say they want a leader who will be ready to force government shutdowns to cut spending.

That raises the possibility the two parties would fail to reach a deal when the federal government comes up against its $31.4 trillion debt limit this year. Lack of agreement or even a long standoff risks a default that would shake the global economy.

The larger body of mainline Republicans who support McCarthy fear the hardliners’ stunts – such as nominating little-known members and even Republican Donald Trump for the role – portrays them as unable to govern.

The House remained leaderless and unable to begin its business on Friday, the two-year anniversary of a Jan. 6, 2021, attack on the U.S. Capitol when a violent mob stormed Congress in an attempt to overturn then-President Trump’s election loss.

“Two years ago, a violent mob – fueled by hate and a tyrannical president – stormed the Capitol and attacked our democracy,” said No. 2 House Democrat Katherine Clark in a statement on Friday.

“Tragically, the same extremist forces continue to have a stranglehold on House Republicans. They cannot elect a leader because their Conference is held hostage by Members who peddle misinformation and want to dismantle democracy.”

The House returned to business at noon (1700 GMT) after a closed-door meeting of Republicans attempted to reach a deal.

“This is by far the most debate we’ve had about the way Congress operates in decades,” hardline McCarthy opponent Lauren Boebert wrote on Twitter on Friday. “That alone is a massive win.”

This week’s 11 failed votes mark the highest number of ballots for the speakership since 1859. But McCarthy rejected a suggestion it meant he would be a weak leader if he succeeded.

McCarthy’s last bid for speaker, in 2015, crumbled in the face of right-wing opposition.

The speaker’s gavel would give McCarthy the authority to block Biden’s legislative agenda, force votes for Republican priorities on the economy, energy and immigration, and move forward with investigations of Biden, his administration and his family.

McCarthy has offered to allow a single member to call for a vote to remove the speaker, according to a source involved in the talks. That would give hardliners extraordinary leverage by allowing them to challenge McCarthy’s authority at any time.

McCarthy is also proposing a vote on a U.S. constitutional amendment to impose congressional term limits, said Brian Fitzpatrick, a Republican moderate involved in the talks. That is unlikely to become law as it would require two-thirds majorities in both chambers and approval by 38 state legislatures.

Several Republican lawmakers said the package of changes McCarthy has proposed could win him the support of as many as half the 20 holdouts but still leave him shy of the 18 extra votes he needs.