Last month, the U.S. Supreme Court said it would maintain a COVID-19 era measure for expediting expulsions of undocumented migrants to Mexico until it had had time to consider Republican arguments against its repeal, which U.S. President Joe Biden said could extend the curbs until at least June.

Meanwhile, Biden administration officials told Reuters the measure known as Title 42 could soon be applied to more nationalities, including Cubans, Nicaraguans and Haitians, stirring fears of expulsions and encouraging migrants to seek asylum to safeguard freedom of movement inside Mexico, analysts and officials say.

Cuban migrant German Ortiz, who is waiting to apply for asylum in the Mexican city of Tapachula near the Guatemalan border, wants to make his way quickly to the United States.

“Once the new law is enforced, they’ll close the road to us,” said Ortiz, who arrived in Tapachula on Dec. 31. “We don’t want to risk it, we must get to the border now.”

Mexico currently only accepts certain nationalities expelled from the United States, but is expected to soon take in more under Title 42 as Washington deals with a record 2.2 million migrants arrests at the U.S. southwest border in 2022.

Title 42 was originally put in place to curb the spread of COVID, but U.S. health authorities have since said it is no longer needed for public health reasons. Immigrant advocates say the policy is inhumane and it exposes vulnerable migrants to serious risks, like kidnapping or assault, in Mexican border towns.

Andres Ramirez, head of Mexico’s Commission for Refugee Assistance (COMAR), estimated that up to 5,000 migrants turned up at COMAR’s Tapachula offices on Jan. 2 and 3 – among the largest groups the agency has ever seen in such a short time. Many of the migrants included Haitians and Nicaraguans.

Ramirez said many migrants seek asylum to obtain documents they believe are necessary to traverse Mexico so they can then go to the U.S.-Mexico border later. Mexico has sought to contain mass movement of migrants toward the U.S. border by breaking up caravans and setting up checkpoints throughout the country.

Ramirez believed the mass of recent arrivals could be migrants from Cuba, Nicaragua and Haiti seeking to reach the United States before rules change.

“I’ve been sleeping here since Jan. 1, waiting for them to help me, to give me shelter,” said Mauricio Hilario, a 27-year-old Salvadoran migrant camping outside the COMAR building with dozens of other people, including small children.

Nearly 400,000 migrants were detained in Mexico through November, twice as many as in 2019, official data show.

Migration is expected to feature prominently on the agenda when U.S. President Joe Biden meets his Mexican and Canadian counterparts for a leaders’ summit next week in Mexico City.

Lorena Mena, director of Continente Movil, a think tank specializing in migration issues, said any expansion of Title 42 would likely increase risky migration because traffickers will encourage expelled migrants to keep crossing the border as they have not been officially deported.

“The fact that people cross borders does not take away their rights, among them, to request asylum,” she added, saying many will try again.

Some migrants, such as Raquel, a 44-year-old Venezuelan who was selling boiled eggs with salt to pay for a small, shared room in Tapachula, expressed hope the summit could yield a plan that will make it easier to reach the United States.

“I’d like both countries to help us and give us a chance to get in … legally without having to risk crossing Mexico or turning ourselves in,” she said. 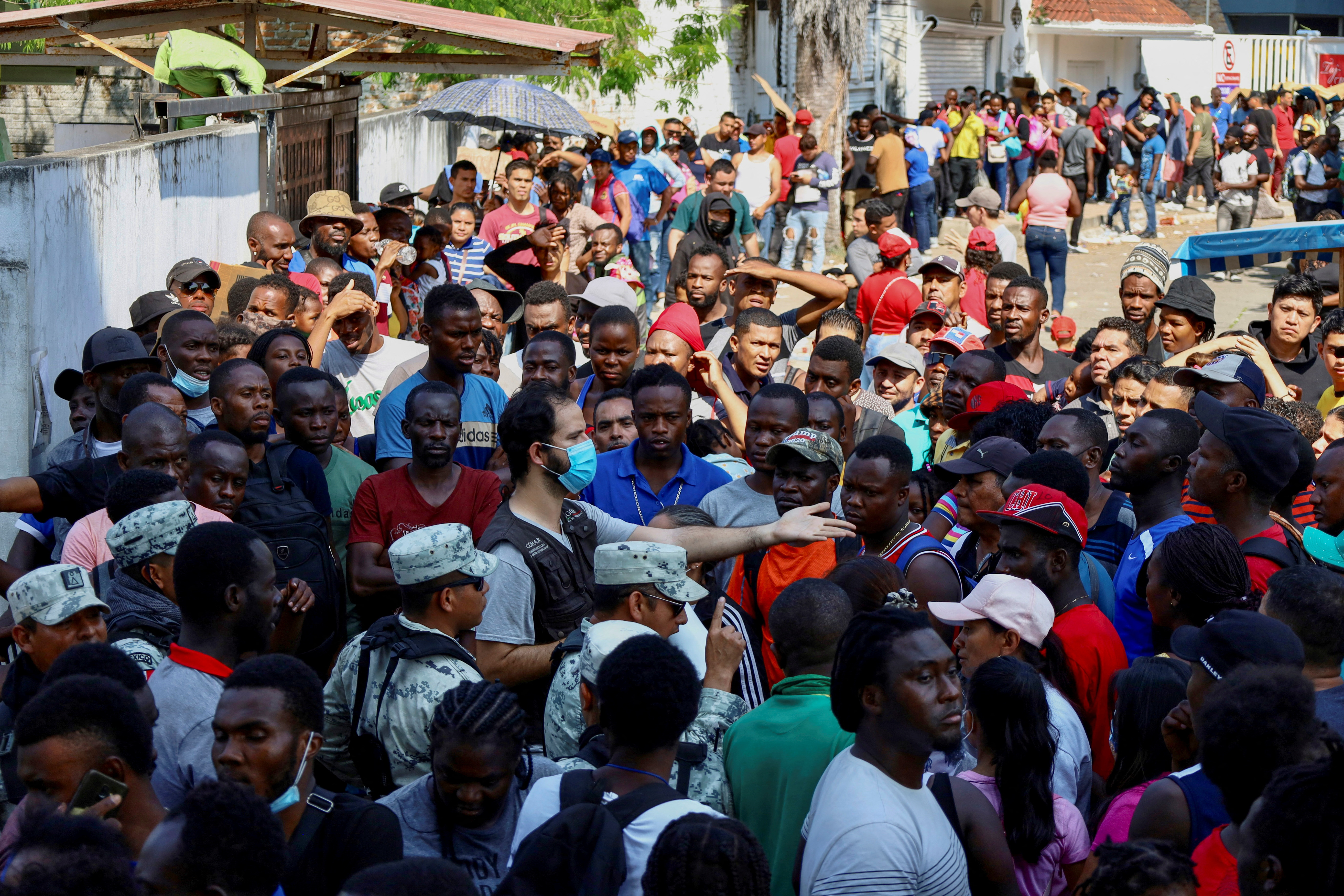 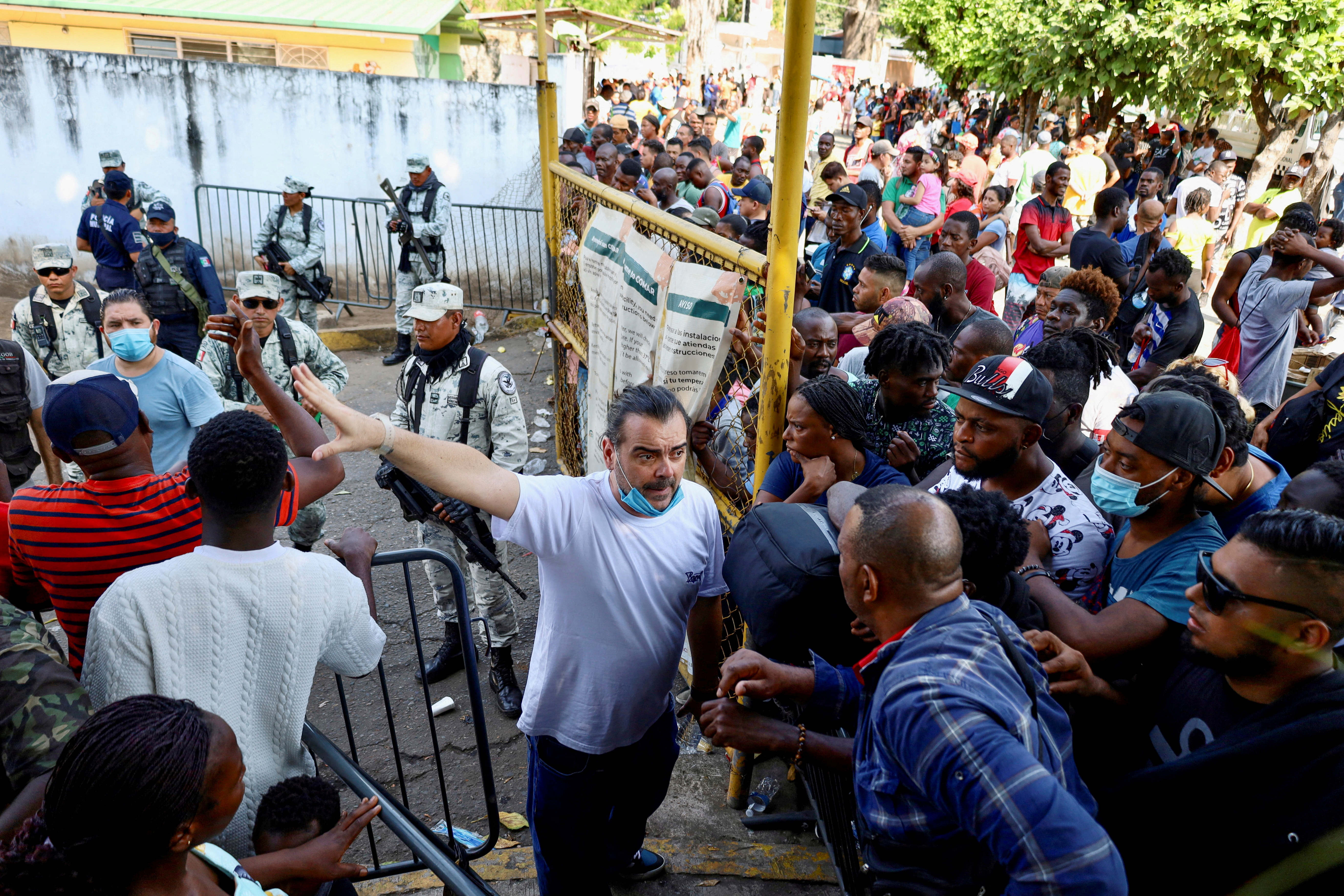 A worker gestures as he talks to migrants who want to regularize their migratory situation outside Mexico’s Commission for Refugee Assistance (COMAR) in Tapachula, Chiapas state, Mexico January 3, 2023. REUTERS/Jose Torres 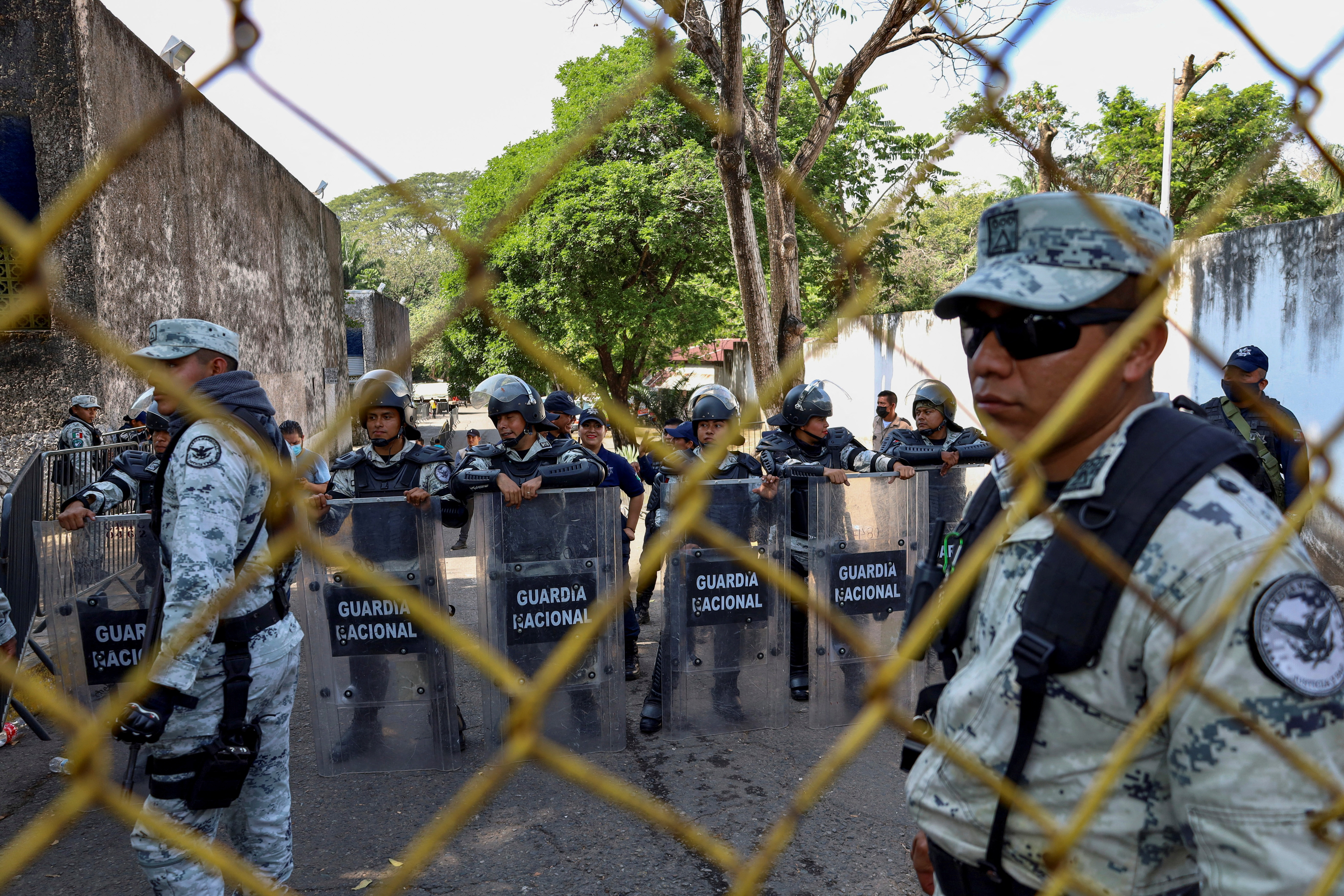 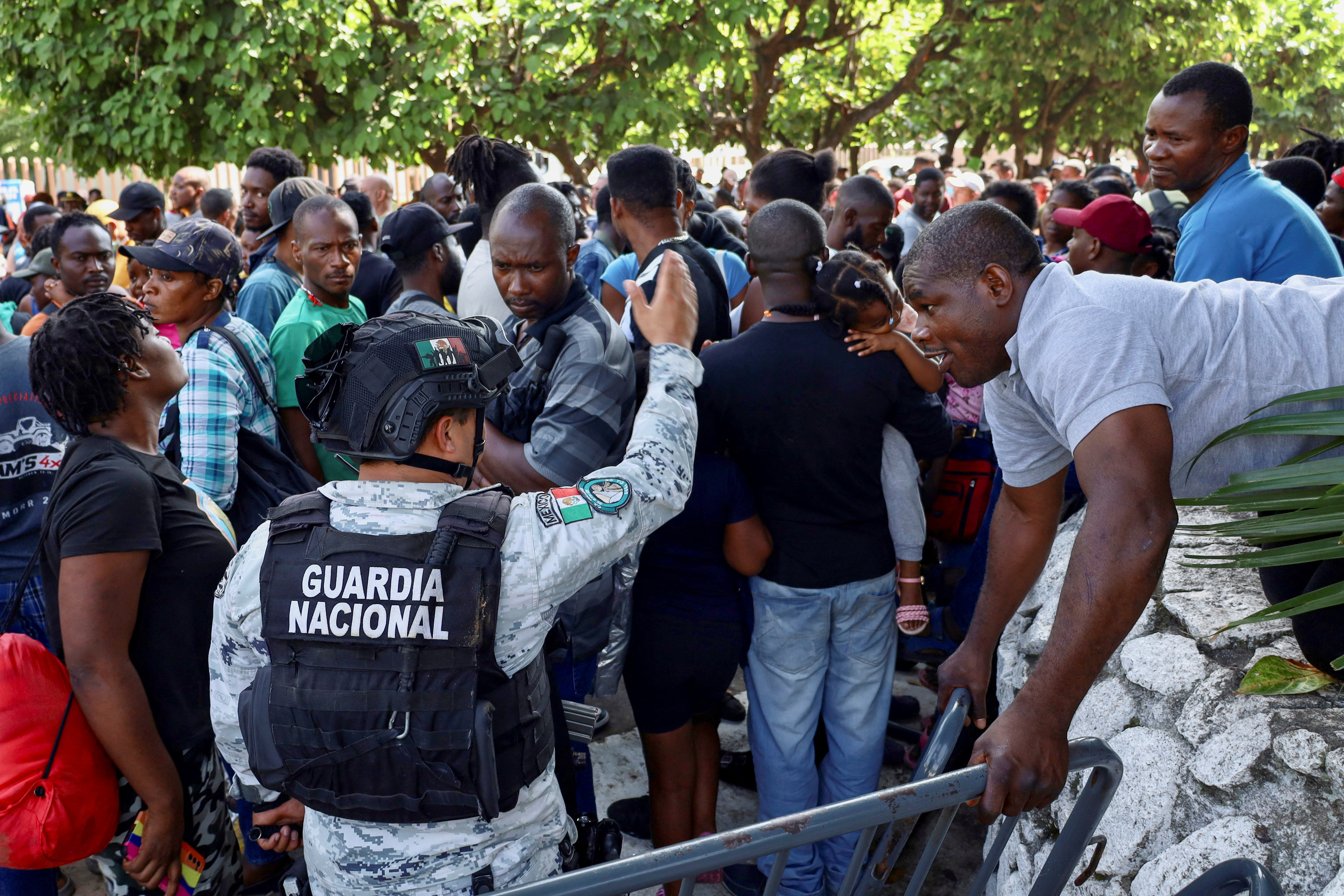 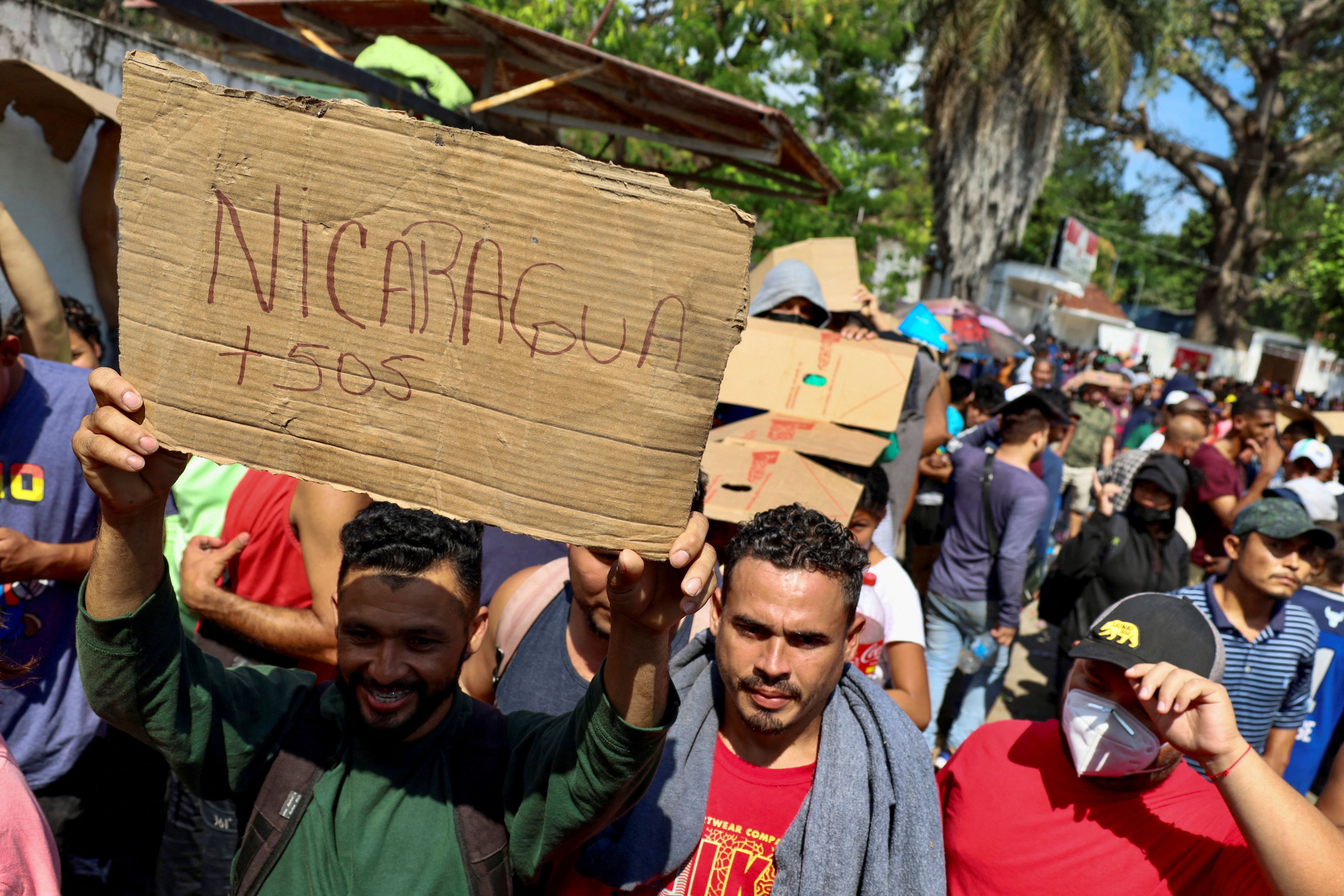 A migrant holds up a sign as he gathers with other migrants who want to regularize their migration status outside Mexico’s Commission for Refugee Assistance (COMAR) in Tapachula, Chiapas state, Mexico January 3, 2023. REUTERS/Jose Torres