Former President Donald Trump took moments to boast about his own accomplishments, complain about the country’s “broken”  justice system, and insult President Joe Biden during a deposition last year.

On October 19, Trump was deposed for a defamation case brought by E. Jean Carroll, a former Elle magazine columnist who has also accused the former president of sexual assault in a separate lawsuit.

An excerpt of Carroll’s and Trump’s depositions were unsealed on Friday.

The records show a combative Trump true to form: He repeatedly insulted Carroll — and at one point mischaracterized her words, claiming she said “rape was sexy” — and gave rambling answers to the opposing counsel, Roberta Kaplan.

Here are some of the meandering moments from Trump’s deposition:

When the opposing counsel asked about Trump’s social media alternative to Twitter, Truth Social, and the number of followers he had, the former president began to talk about how well the platform was supposedly doing.

“They have the ratings, and they said Truth Social is hot,” he said.

It’s unclear what ratings Trump was referencing. According to a November report from TheRighting, a company that analyzes right-wing media trends, Truth Social’s number of unique visitors was experiencing a two-month decline around the time of Trump’s deposition.

The platform went from 4.02 million visitors in August to 2.95 million unique visitors in October, according to the report.

One of Trump’s statements that Carroll’s attorney focused on was a Truth Social post published on October 12, 2022, in which Trump called the rape accusation against him a “hoax.”

Kaplan asked several questions about how the statement was prepared. At one point, Trump clarified it was a Save America statement, referencing one of the former president’s fundraising vehicles, before he had an epiphany mid-deposition.

“This was a Save America statement, which is very interesting actually because it is saving America, stopping people from doing things like this, trying to save — it’s one big part of saving America.”

The counsel also asked if Trump wrote the October 12 statement himself and if anyone had to review it. Here, he finds an opening to take a swipe at the president. 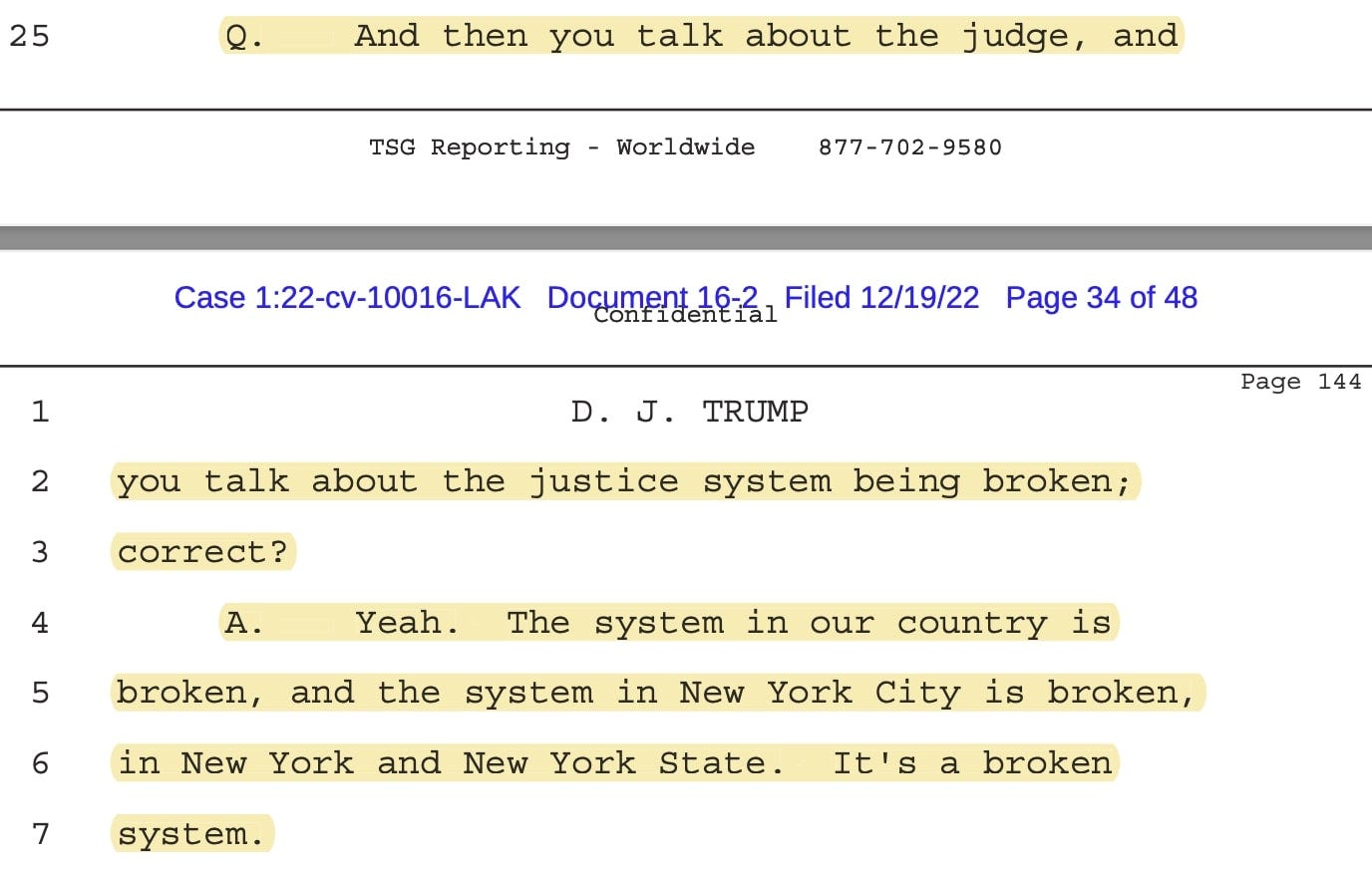 One of Trump’s oft-repeated gripes is how the entire US legal system appears to be bent against him.

There’s a long list of legal cases against the former president, including a civil fraud case being pursued by New York State Attorney General Letitia James. Trump briefly aired his grievance about it.

CNN’s Anderson Cooper also gets the heat from Trump.

Carroll’s attorney asked about a video that used portions of Carroll’s 2019 interview with Cooper, during which she explained why she doesn’t like to use the word “rape.”

She explained it “carries so many sexual connotations” and that “most people think of rape as being sexy” and “think of the fantasies.”

During the deposition, Trump misconstrued Carroll’s statement and claimed she said “it was very sexy to be raped.”

As he explained how the video was prepped, Trump called Cooper’s 360 show on CNN “stupid” and a “bad ratings show.” 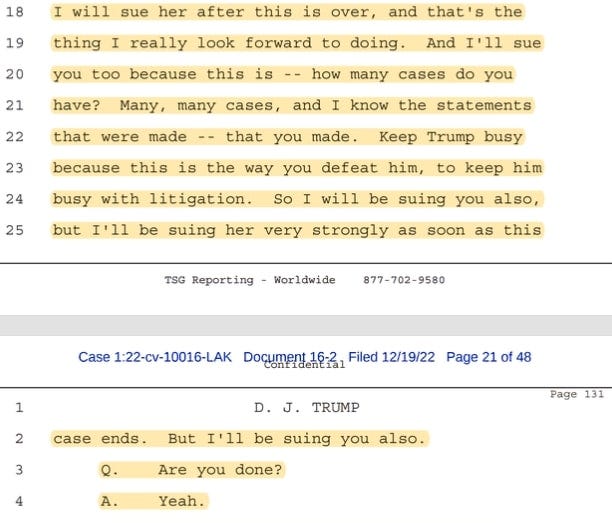 An evidently frustrated Trump goes off in his deposition after he’s asked why he issued the October 12 statement.

After calling Carroll’s accusation a “lie,” Trump threatens to sue Carroll and her attorney, Kaplan, who has been deposing him.

“I’ll sue you too because this is — how many cases do you have,” Trump asked.

Kaplan is also representing investors in a fraud suit against Trump and his three oldest children.

He repeats that he’ll be suing Kaplan, to which the counsel replies: “Are you done?” 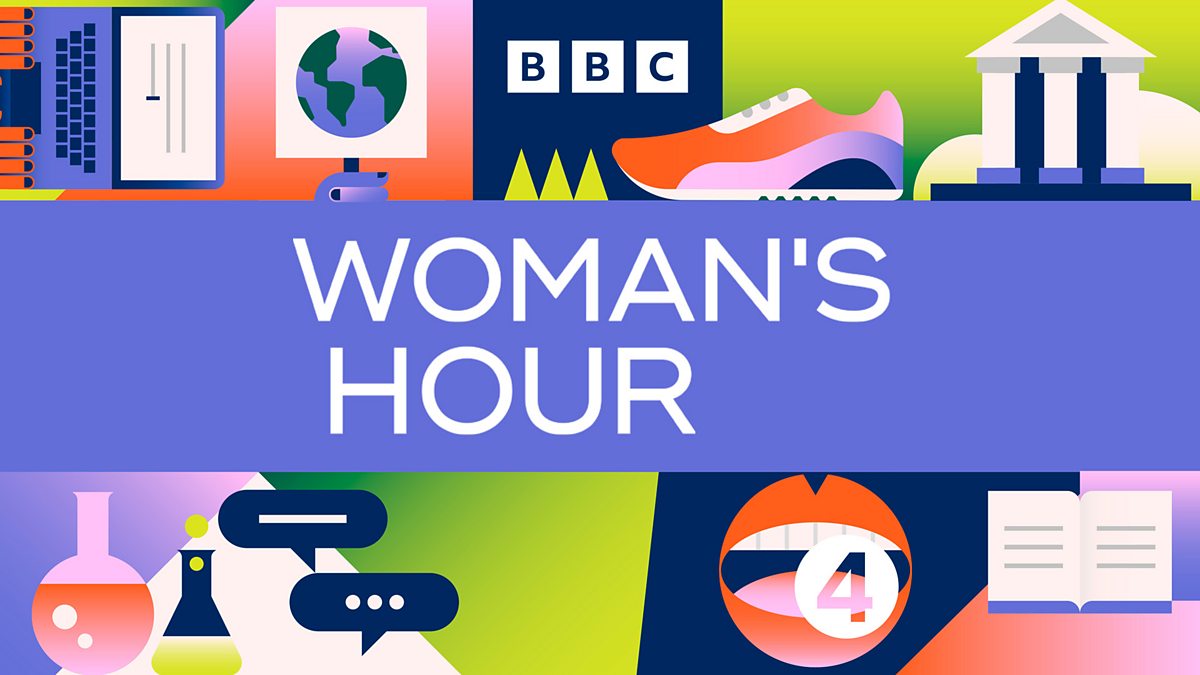 Home » Audio Sources - Full Text Articles » Trump used his deposition in a defamation case to boast, complain, insult Joe Biden, and threaten to sue the attorney questioning him
a