As the investigation into the murders of four University of Idaho students continues, a former FBI agent recently warned that more evidence will be leaked to the public over time.

“As feared, as time goes by, evidence, including video will continue to be leaked. Whether for money or attention or whatever the motive, it is not right and will not help [law enforcement] in their investigation,” former FBI agent Jennifer Coffindaffer wrote in a tweet on Tuesday. “Don’t we all want this case solved?”

The tweet posted by Coffindaffer included a screenshot of security footage that appeared to show two of the victims, Kaylee Goncalves and Madison Mogen, at a bar just a few hours before they were fatally stabbed. It is currently unclear how the photo was leaked to the public but it was also posted on other social media platforms such as Reddit.

Newsweek reached out to the Moscow Police Department for more information on the photo and surveillance video.

On November 13, Goncalves, Mogen, Ethan Chapin and Xana Kernodle were fatally stabbed in their off-campus residence located at 1122 King Road in Moscow, Idaho. All four were students at the University of Idaho. 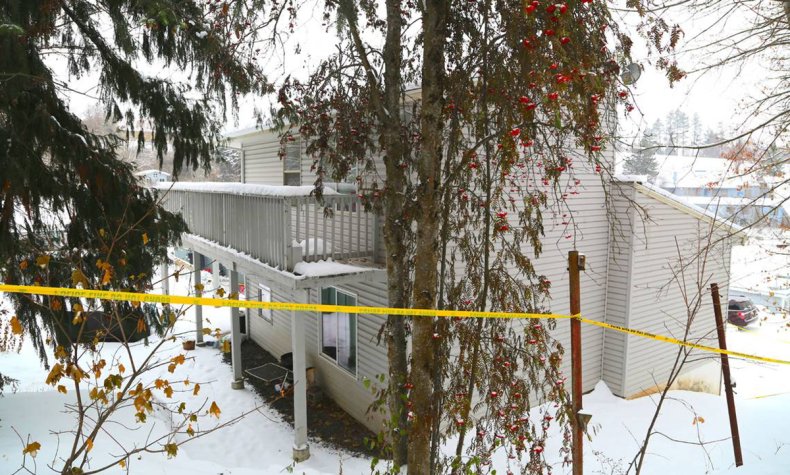 A view from the back of the house on King Road in Moscow, Idaho, where police found four University of Idaho students stabbed to death on November 13. On Tuesday, a former FBI agent warned of more evidence and information on the quadruple homicide being leaked to the public.
Angela Palermo/Idaho Statesman/Tribune News Service/Getty

The Moscow Police have continued to investigate the quadruple homicide, but as of Tuesday, no suspect or person of interest has been identified. The weapon used in the crime has yet to be found, but the Moscow Police Department said that they believe a fixed-blade knife was used by the perpetrator.

Throughout the investigation, police have urged the public to avoid speculation and rumors found online.

“Over the past four weeks, rumors and speculation has led members of the public to provide tips based on rumors rather than official information provided about the case,” the Moscow Police Department said in a press release earlier this month. “Rumors and speculation have also affected the families of the victims, friends, and fellow students. In some cases, this has led to harassing and threatening behavior toward potentially involved parties.”

One major lead that police have continued to investigate is a white Hyundai Elantra that was seen near the students’ home around the time they were murdered. Earlier this month, a similar vehicle was seen in Eugene, Oregon, prompting an array of speculation from online sleuths.

However, in a statement last week, the Moscow Police Department said that the vehicle in Oregon is registered to a woman from Colorado and she is “not believed to have any relation to any property in Moscow, Idaho, or the ongoing murder investigations.”

Newsweek reached out to the Moscow Police Department and Coffindaffer for comment.