North Wildwood, a picturesque resort town of 5,000 on the Jersey shore, says it is about to lose its war against coastal erosion. Since the 1980s, the Atlantic ocean has washed away some 1,500 ft. of beach that once sat in front of North Wildwood’s boardwalk, with rising sea levels and increasingly violent wind and rain accelerating the process in recent years. Today, just 30 ft. of sand dunes separate buildings from the waves—and months remain in the Nor’easter season. “One good storm is going to wipe this dune out,” says Mayor Patrick Rosenello. “It could be gone in six hours.”

But for the moment, Rosenello says, North Wildwood is being left to battle alone. In October, New Jersey’s department of environmental protection (DEP) denied the town’s request to build a metal bulkhead as a barrier behind the remaining dunes, arguing that there is no imminent threat of loss of life or “severe loss of property.” The department says the project could worsen erosion long term for North Wildwood and its neighbors, and destroy fragile wetland ecosystems. It wants the town to wait for a federally-funded dune-building project that has been mired in delays for more than a decade.

On Dec. 6, after Rosenello said North Wildwood would build the bulkhead with or without state permission, New Jersey filed a lawsuit, asking a judge to block construction.

Rosenello says North Wildwood has no choice but to take matters into its own hands. “You’ve got folks who claim that they believe in climate science and resilience, but they are having a very hard time turning those beliefs into real world projects,” he says. “We are left as the victims of that failure.”

The dispute is a particularly bitter example of conflicts emerging across the U.S. as the country begins the complex process of overhauling towns and infrastructure to prepare for climate change. There’s a “fundamental tension” in climate adaptation, says Lisa Dale, a policy lecturer at Columbia University’s Climate School. Because every community is different, experts agree that the process of adapting to increasing heat, droughts, storms, and sea level rise needs to be locally-led. Yet, because environmental systems and financial resources are shared regionally and nationally, it would be chaos if towns acted on their own. In the U.S., the complexity is compounded by a multi-layered system of government and a robust set of environmental laws. “We have this urgency around climate adaptation, and yet we have a [governance] process that is deliberative, and intentionally slow,” Dale says. “The timelines don’t match up.”

This is the first case that TIME is aware of in which a state has sued a community for its actions to address climate risk. But Dale says more may be coming, as towns increasingly find themselves on the front lines of climate change. “Each city, each community, each neighborhood, is making up its response from scratch, and that’s creating a lot of tensions,” she says. “We’re going to run into all kinds of conflict. “

New Jersey is not ignoring the state’s coastal erosion problem. Ever since 1962, when one of the worst storms on record swallowed up huge sections of the Jersey shore, the state has been working with the U.S. Army Corps of Engineers to rebuild dozens of eroded beaches on a regular basis. These projects usually involve dredging sand from offshore and piling it onto the coast, costing tens of millions of dollars each year. 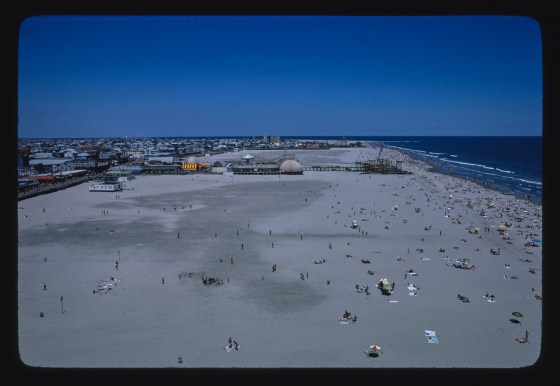 The state carried out a beach nourishment project for North Wildwood between 2009 and 2012, moving sand from an inlet just north of town, but it has been washed away by a series of major storms.

Since then, the town says efforts to save its beach have been in limbo. North Wildwood sits in a highly exposed spot, on the northern edge of a seven square mile barrier island jutting into the Atlantic. Most of the sand that has been washed off its beaches has ended up just down the coast, fattening the beaches at the neighboring towns of Wildwood and Wildwood Crest.

Rather than using the conventional offshore dredging method, New Jersey says the solution here is for the Army Corps to pump 1.3 million cubic yards of sand from those towns’ shores to build sturdy engineered dunes along the length of the barrier island, as well as an extra protective berm at North Wildwood. The federal government has already agreed to contribute 65% of the $22 million construction cost, with the state paying most of the rest. But New Jersey is yet to secure commitments from the other towns, or from some 20 private property owners who would also need to agree. Even once they do, the state says the work couldn’t begin for another two years, while the Army Corps finalizes its engineering plans and gets permits. That’s despite the dune project first being proposed in the 2000s, according to Stewart Farrell, director of the coastal research center at New Jersey’s Stockton University. “It’s a fairly long time to deal with some paperwork,” he says. “Ice sheets move faster.”

In the meantime, the coast has become an obsession in North Wildwood. Thousands of residents and regular visitors to the town diligently track the state of the beach in a Facebook group and compare pictures today with ones from decades past. The local government spends millions of dollars a year to truck hundred of thousands of tons of sand from Wildwood.

In the last two years the town has begun to take more drastic steps: In 2020, without state authorization, North Wildwood built an initial 2,000 ft. stretch of the bulkhead, which it now wishes to extend by 400 ft. In October, after the remnants of Hurricane Ian cleared some 80 ft. of sand dune, the town carried out an emergency reconstruction of the sand piles, even though the state forbade them from doing so. Both those acts are cited in New Jersey’s lawsuit, which the state shared with TIME. 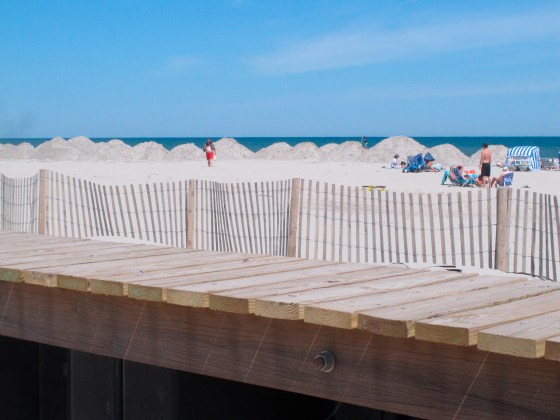 Wayne Parry—APPiles of sand and a bulkhead recently built in North Wildwood, N.J. ON June 8, 2020, where the state Department of Environmental Protection says the city destroyed sand dunes without permission. The city acknowledges it built the wall without a permit, but says it had to because of erosion and damage to the beachfront that could not wait.

The New Jersey DEP declined to comment on the case, citing the ongoing litigation. But it shared a letter sent by state officials to Rosenello warning that taking “self-help” measures “without proper engineering review by the DEP may only further exacerbate coastal erosion, creating unintended consequences for the City, its residents, and neighbors.” They also warned that the bulkhead and its extension were a threat to critical wetland ecosystems, in violation of state laws. (In its court filing, it cites peregrine falcons, northern harriers and American kestrels as state-endangered birds that may use the area as habitats.)

Farrell, who has studied the New Jersey coast for five decades, says he doesn’t believe the bulkhead will worsen erosion long-term for either North Wildwood or its neighbors. He also says the ecosystems threatened by the bulkhead are mostly ephemeral wetlands, where rainwater pools for parts of the year. “They’re not exactly the most valuable of environmental assets.”

But when it comes to adapting to climate change, Dale, the policy lecturer, says state and regional leaders do have a responsibility to take a wider view than the needs of individual towns. For one thing, they are bound by state and federal laws to look out for wider environmental considerations that may not seem as immediately important to local governments as their climate threats. While providing critical protection for the environment, legislation such as the Endangered Species Act and the National Environmental Policy Act, can sometimes slow the development of infrastructure for resiliency or clean energy. There is fierce debate within the climate policy world about whether or not they need reform.

What looks like a good solution to a climate problem on a local level can often have disastrous knock on effects for other communities. For instance, seawalls installed to protect beachfront homes in Florida have worsened erosion at nearby public beaches. To deal with droughts, municipalities like some in California have allowed farmers to divert so much water from rivers that stretches in urban areas have dried up. The U.S.’ addiction to fire suppression is another example: to protect towns, 20th century authorities tried to suppress all wildfires, which eventually disrupted forests’ natural growing cycles across the Western region, creating more fuel and therefore larger fires.

Measures like that, which have negative effects, across space or time, are known as “mal-adaptation,” Dale says. “We need state level or national level coordination, which should have the larger picture in mind, to minimize those outcomes.”

Often that larger picture is gloomy for towns: as sea level rise and powerful storms make it more expensive to protect towns in flood plains, counties and states are increasingly opting to buy-out communities instead, mostly with FEMA funds—sometimes by force. Up to 13 million people may be forced to move from risky areas in the U.S. by 2100, per a 2020 study by researchers at the University of Southern California.

Will North Wildwood be one of them?

Rosenello, the mayor, is adamant that it wouldn’t make economic sense for communities like his along the Jersey shore, which remain popular tourist destinations and generate hundreds of million of dollars in tax revenue for the state each year, to be left to the waves.

The costs to keep the town safe will keep growing, though. How much depends on humanity’s success in reducing greenhouse gas emissions and slowing the melting of glaciers. According to the National Oceanic and Atmospheric Administration (NOAA), sea levels on the East Coast are set to rise by up to 1.5 ft. between 2020 and 2050—more than the increase over the last 110 years. By 2100, NOAA predicts anywhere between 1.5 ft. and 5 ft. more. On the upper end of that, North Wildwood and communities like it would have three choices, Farrell says: “You can put a Holland style dike around the whole 7 square mile barrier island and pump out all the rainwater. You can pile dirt across the island to raise it up ten feet and pay a lot for reconstruction. Or you can retreat.”

In the short term, the extended bulkhead would shield North Wildwood’s streets from flooding caused by “moderate to severe storms,” Farrell says. But a repeat of the 2009 state replenishment project or the planned Army Corps project will be needed to protect the town in future.

On Dec. 8 a judge denied the New Jersey DEP’s request for an emergency injunction to prevent North Wildwood carrying out its work. But Rosenello says he will hold off installing the bulkhead until a storm punches a hole in the remaining dune—which he expects to happen within the next few weeks.

The state and the town’s representative will meet at a hearing on Jan. 16. Rosenello says he’s hopeful that they can find a way to deal with climate threats together. But for now, he says the gulf between their perspectives feels too big. “When you’re living in the city 100 miles away, and you’re reading climate science papers, you might talk about climate resiliency,” he says. “But until you watch 80 ft. of dune disappear in 48 hours, you just don’t get the urgency.”

Home » Audio Sources - Full Text Articles » Threatened by Sea Level Rise, This New Jersey Town is Taking Matters Into Its Own Hands
a