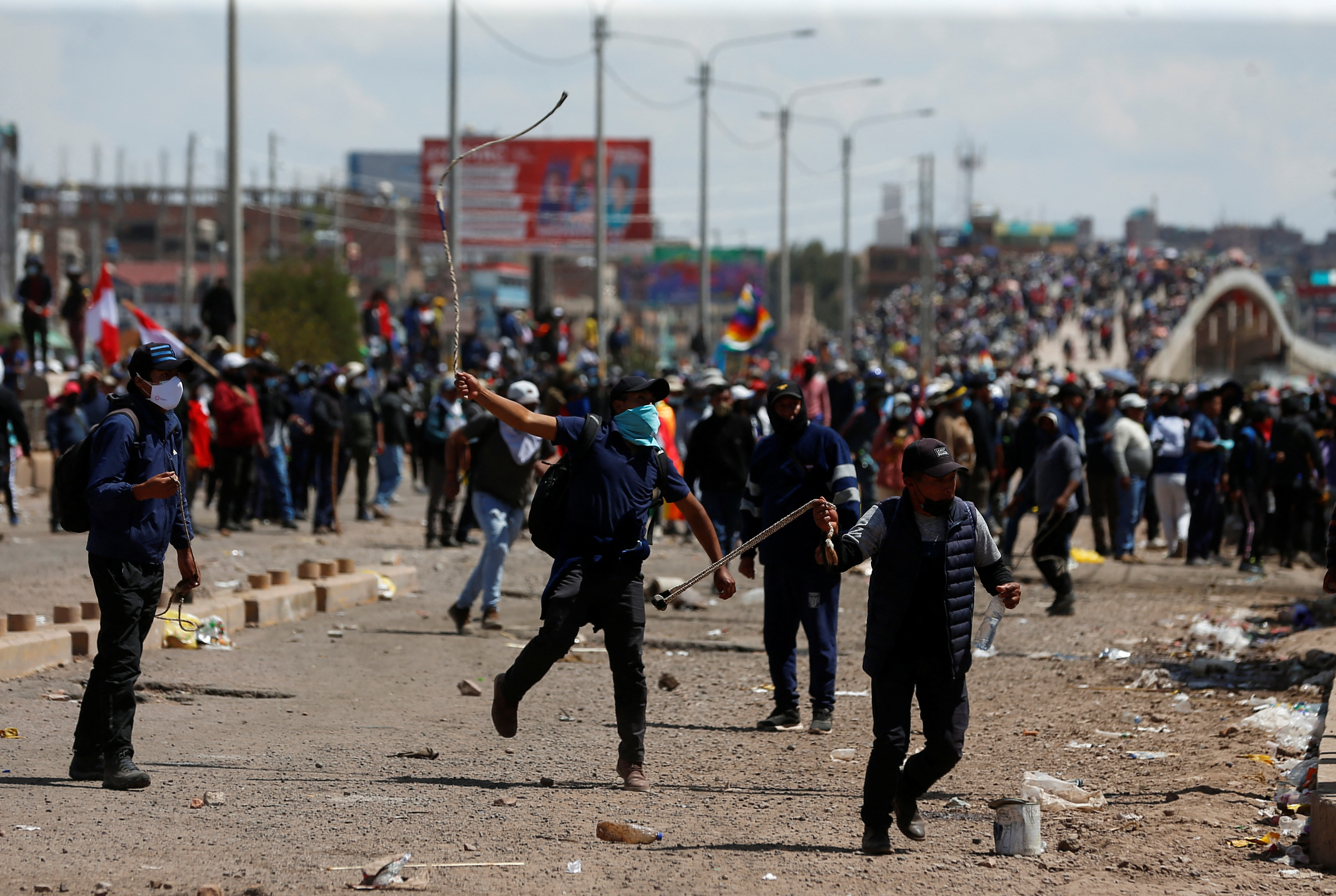 Demonstrators clash with security forces during a protest demanding early elections and the release of jailed former President Pedro Castillo, near the Juliaca airport, in Juliaca, Peru January 9, 2023. REUTERS/Hugo Curotto

Thousands of Peruvians, many from the country’s southern mining regions, descended on the capital Lima on Thursday for a major planned march against the government and Congress, fired up by over 50 deaths linked to protests since last month.

The clashes mark the worst violence Peru has seen in over 20 years as many people in poorer rural regions vent anger at the Lima political elite over inequality and rising prices, testing the copper-rich Andean nation’s democratic institutions.

Protesters are demanding the resignation of President Dina Boluarte, fast new elections, a clear out of Congress and a new Constitution to replace a market-friendly one dating back to strongman leader Alberto Fujimori in the 1990s.

In buses and on foot, thousands have journeyed to the capital, carrying flags and banners criticizing the government and police for deadly clashes in the southern cities of Ayacucho and Juliaca, many demanding Boluarte step down.

“We want Dina Boluarte to resign,” said Julio Saldivar, a protester from Ayacucho, where a dozen peopled died in December.

Protesters are planning a “Take over Lima” protest on Thursday, with thousands of police expected in response. On Wednesday night scuffles began with protesters throwing rocks and police using tear gas to disperse crowds.

“We want to centralize our movement here in Lima, which is the heart of Peru, to see if they are moved,” said Domingo Cueva, a protester at the state University of San Marcos.

The protests, sparked by the dramatic Dec. 7 ouster of leftist former President Pedro Castillo after he tried to illegally shutter Congress and consolidate power, have seen 43 people killed in clashes, including one police officer. Nine more have died in related accidents.

Police have increased surveillance of roads entering Lima and political leaders have called for calm. The government last week extended a state of emergency in Lima and the southern regions of Puno and Cusco, curtailing some civil rights.

Boluarte has asked for “forgiveness” for the protest deaths but remained firm that she is not going to resign.

Human rights groups have accused the police and army of using deadly firearms in the protests. The police say that the protesters have used weapons and homemade explosives.

The protest deaths have been the lightning rod for much of the anger, with banners calling Boluarte a “murderer” and calling the killings by police and military “massacres”.

“We won’t forget the pain the police have caused in the town of Juliaca. We women, men, children have to fight,” said one protester traveling to Lima who didn’t give her name.

Protester Cueva, who had come from Cusco, said many had tried to come to Lima for the Thursday protest and strike, though not all had made it.

“We have observed an increase in repressions everywhere. Some leaders have been stopped on the way, they were not allowed to pass,” he said.