Peru’s new president pledged to work with Congress on Tuesday to see if the next election could be held sooner than previously proposed, as raucous street protests that have led to at least seven deaths so far showed little sign of letting up.

President Dina Boluarte, the former vice president, was sworn in last Wednesday after then-leader Pedro Castillo illegally sought to dissolve Congress hours before being swiftly removed from office by lawmakers.

The move has led to angry and sometimes violent protests by Castillo’s supporters demanding a fresh presidential election, which have been met by police dispersing tear gas and gunfire in an effort to quell the unrest.

Boluarte, who has already pledged to seek a way to hold the election slated for 2026 in April 2024, pleaded for calm.

“I’m arranging a meeting with the constitution committee (of the Congress) so that together we can shorten the timeframe,” she said, adding that she could not change the timing of the election without congressional support.

Castillo was arrested shortly after his ousting and is being investigated over charges of rebellion and conspiracy. He lashed out over his detention on Tuesday, while also calling on soldiers and police to lay down their arms during a court appearance from a Lima penitentiary.

“I’ve been unjustly and arbitrarily detained,” said Castillo, in remarks broadcast online by the court. He repeated that he was innocent of the charges he faces.

In posts on Twitter shortly afterwards, Castillo said there had been a “massacre of my people” and again called on the armed forces to end the bloodshed.

Four adolescents were killed by gunfire amid protests that have mainly hit rural areas of the country, according to statements from public defense and police officials.

Some protesters have torched public buildings, attacked police stations, and blocked highways while demanding Boluarte’s resignation, a new constitution and the dissolution of Congress.

Three airports, in Apurimac, Arequipa, and the tourist hub of Cusco, remained shuttered on Tuesday due to the unrest.

In Lima, public schools closed on Tuesday, while at least one key court in the capital announced it would also close for the day after rocks were hurled at it on Monday.

Police reported that there were highway blockades Tuesday morning in 13 of the country’s 24 regions.

In a post on Twitter, Jaime Quito, a lawmaker with the Marxist Peru Libre party that Castillo rode to a narrow election victory last year, lambasted both Boluarte and the conservative-dominated Congress as engineers of a coup.

“They’ve declared war on the people,” he wrote. 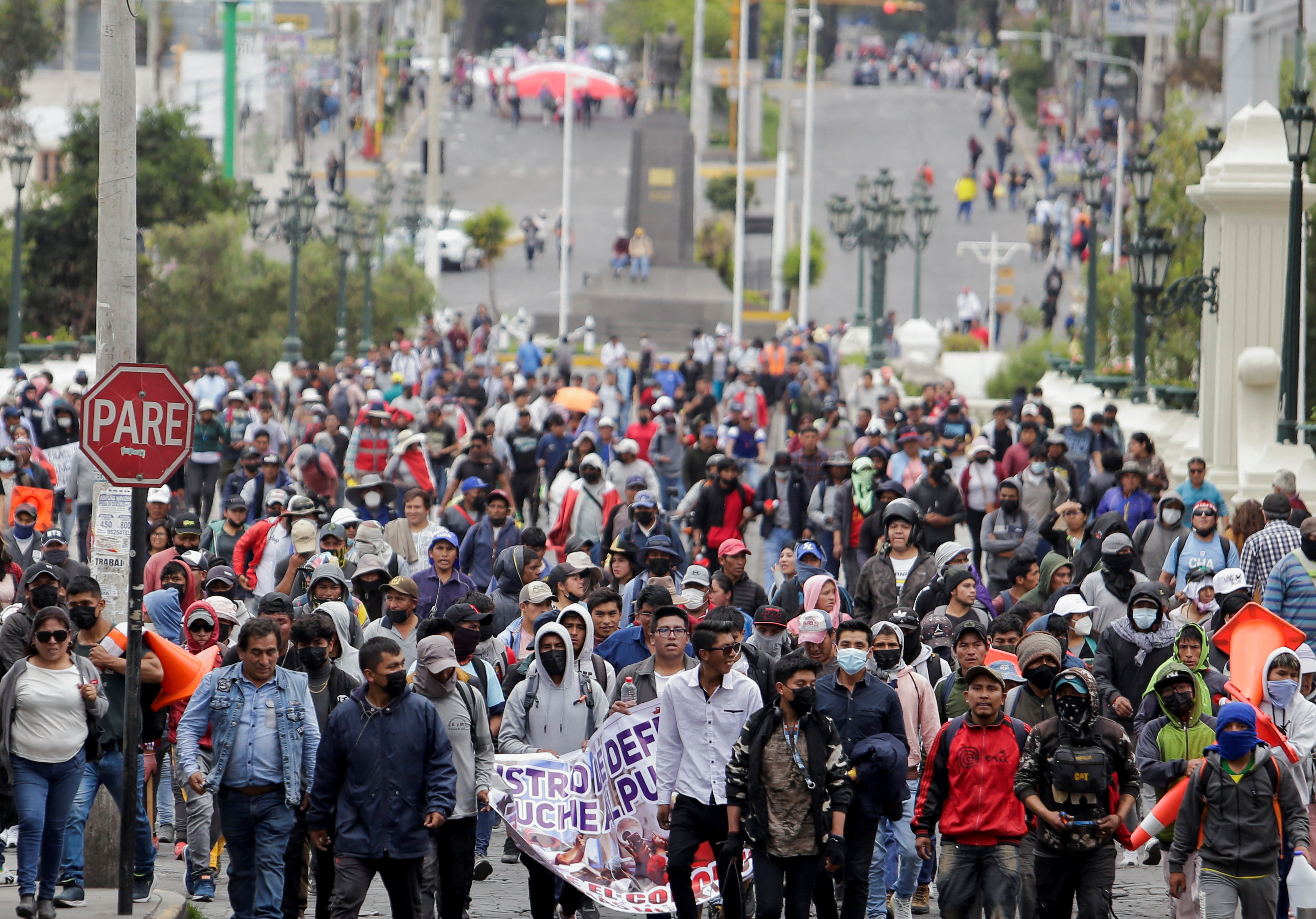 Protesters who demand the dissolution of Congress as well as democratic elections, rejecting Dina Boluarte as Peru’s president after former leader Pedro Castillo was ousted, take part in a demonstration in Arequipa, Peru December 13, 2022. REUTERS/Oswald Charca 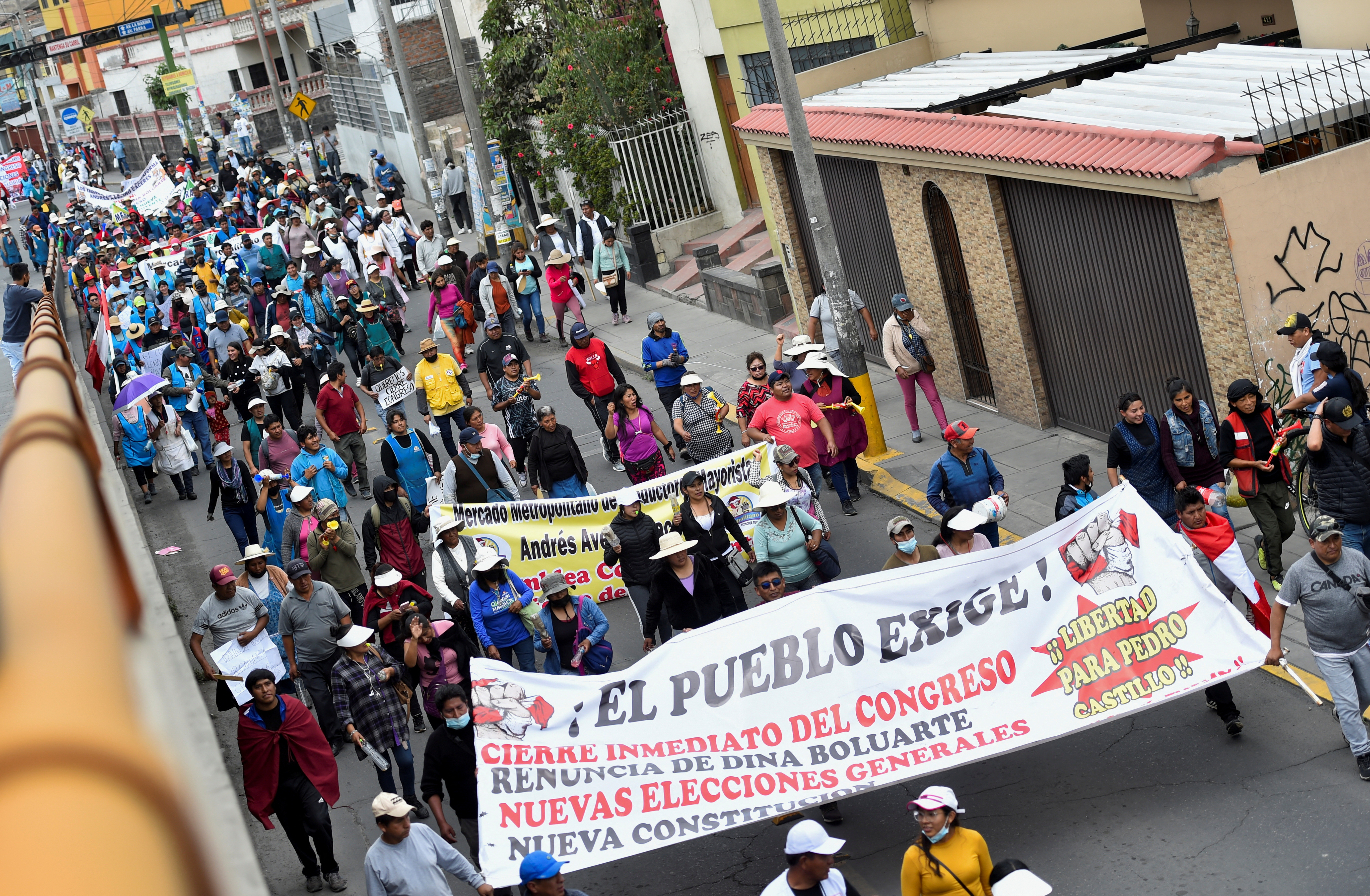 Protesters who demand the dissolution of Congress as well as democratic elections, rejecting Dina Boluarte as Peru’s president after former leader Pedro Castillo was ousted, take part in a demonstration in Arequipa, Peru December 13, 2022. REUTERS/Stringer