Listen to this article
2022-12-28T22:01:09Z
Russia has retaliated against a price cap on its oil imposed by Western countries. Moscow will ban oil sales to countries that abide by the price cap that was imposed on Dec. 5, President Vladimir Putin decreed. Francis Maguire reports.

Russian forces increased mortar and artillery attacks on the city of Kherson more than six weeks after it was retaken by Ukrainian troops, while also exerting pressure along frontlines in the east, Ukraine’s military said on Wednesday.

Russia had shelled more than 25 settlements around Kherson and Zaporizhzhia, causing civilian casualties and damaging civilian infrastructure in Kherson city and region, the General Staff of Ukraine’s Armed Forces said in a statement. It said a number of Russian forces were leaving their posts around Zaporizhzhia.

Reuters was not able to verify battlefield reports.

Ukrainian President Volodymyr Zelenskiy, in his nightly video address, urged Ukrainians to hug loved ones, tell friends they appreciate them, support colleagues, thank their parents and rejoice with their children more often.

Russian President Vladimir Putin ordered his forces to invade Ukraine in late February, calling it a “special military operation” to demilitarize his neighbour, which he said posed a threat to Russia. Ukraine and its Western allies have denounced Russia as making an imperialist-style land grab.

The 10-month-long war has caused the deaths of tens of thousands of Ukrainian civilians and service personnel on both sides, the devastation of Ukrainian cities and towns, and the flight of millions from their homes. It has also disrupted the global economy, driving up energy and food prices.

Heavy fighting also persisted around the Ukrainian-held city of Bakhmut, now largely in ruins, in the eastern province of Donetsk, and to its north, around the cities of Svatove and Kreminna in Luhansk province, where Ukrainian forces are trying to break Russian defensive lines.

Britain’s defence ministry said Russia had likely reinforced the Kreminna section of the frontline as it is logistically important to Moscow and has become relatively vulnerable following Ukrainian advances further west.

Zelenskiy is pushing a 10-point peace plan that envisages Russia fully respecting Ukraine’s territorial integrity and pulling out all its troops.

But the Kremlin rejected the plan, repeating its stance that the Kyiv government must accept Russia’s annexation of four Ukrainian regions: Luhansk and Donetsk in the east, and Kherson and Zaporizhzhia in the south. That has been dismissed by Ukraine and most other nations.

“There can be no peace plan for Ukraine that does not take into account today’s realities regarding Russian territory, with the entry of four regions into Russia,” Kremlin spokesman Dmitry Peskov said.

“Our national colours are today an international symbol of courage and indomitability of the whole world,” he said in a 45-minute behind-closed-doors speech.

It quoted Lavrov as saying Russia would beef up its troops and technological capabilities in Ukraine. He said that Moscow’s mobilised troops had undergone “serious training” and while many of them were now on the ground, the majority were not yet at the front.

Russian forces abandoned Kherson city around Nov. 11 in one of Ukraine’s most significant gains of the war. The Kherson region, at the mouth of the Dnipro River, serves as a gateway to Russian-annexed Crimea.

The joy of Kherson residents over the city’s liberation has quickly given way to fear amid relentless Russian shelling from the east bank of the Dnipro, and many have since fled.

Russian forces shelled the maternity wing of a hospital in Kherson, Kyrylo Tymoshenko, Zelenskiy’s deputy chief of staff, said on the Telegram messaging app. No one was hurt and the staff and patients had been moved to a shelter, he added.

TV footage showed workmen replacing shattered windows with sheets of board amid the rubble of damaged brick walls. A baby’s picture hung in an empty room and beds and hospital equipment stood empty and unused. 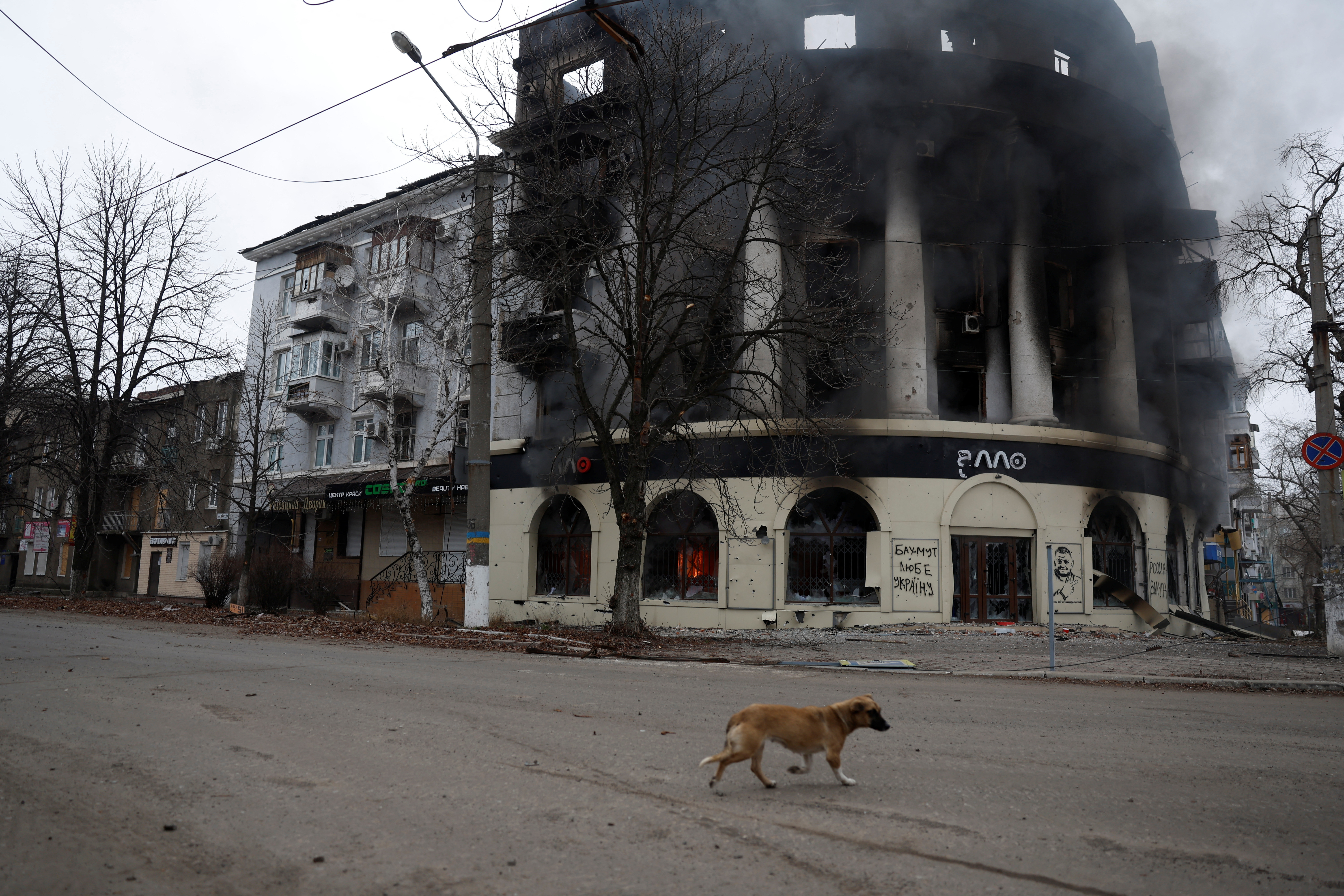 A dog walks past a building burned from a strike, as Russia’s attack on Ukraine continues, during intense shelling in Bakhmut, Ukraine, December 26, 2022. REUTERS/Clodagh Kilcoyne 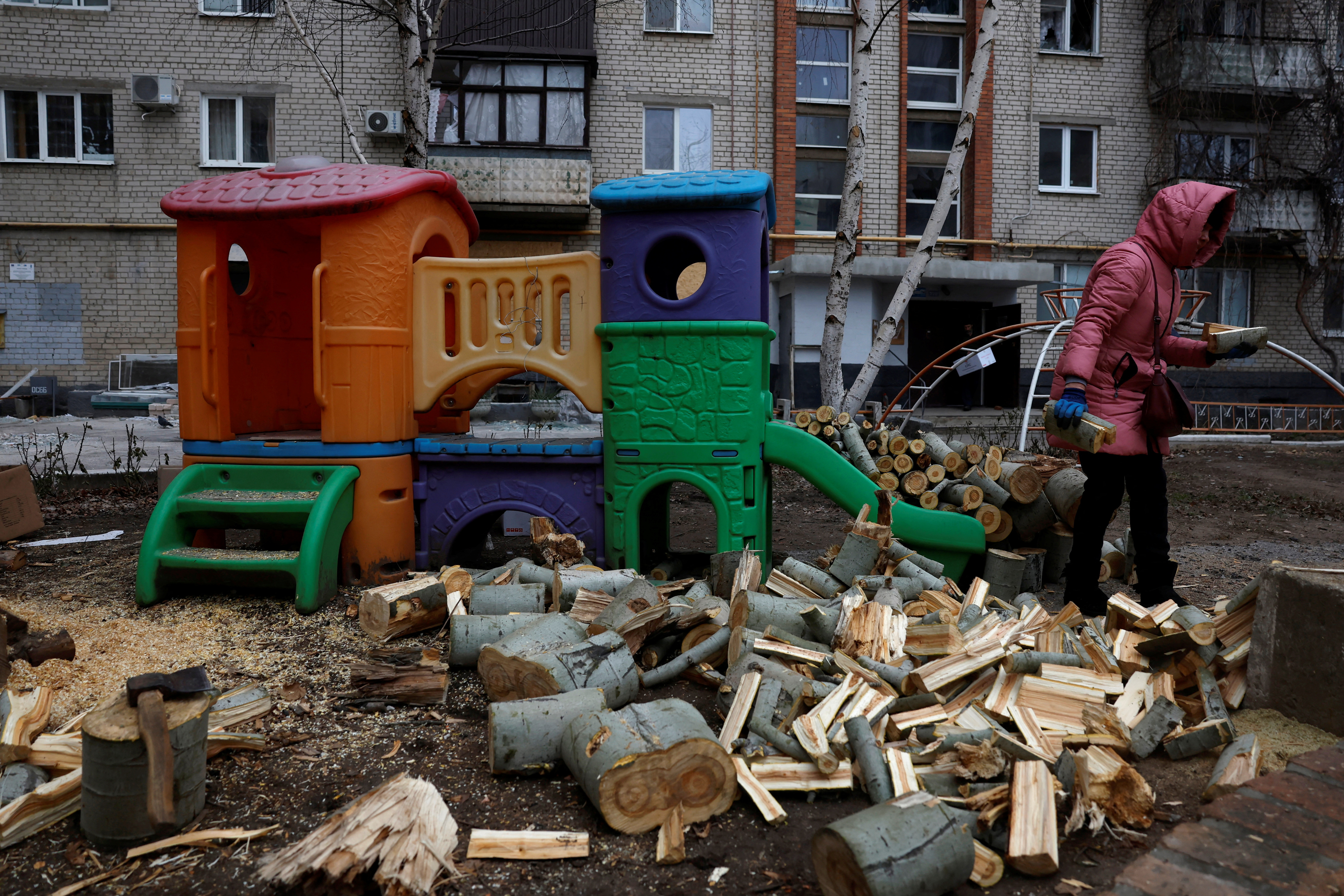 A person holds wood chopped up from a tree that fell down from a strike, to burn for heat, as Russia’s attack on Ukraine continues, during intense shelling in Bakhmut, Ukraine, December 26, 2022. REUTERS/Clodagh Kilcoyne 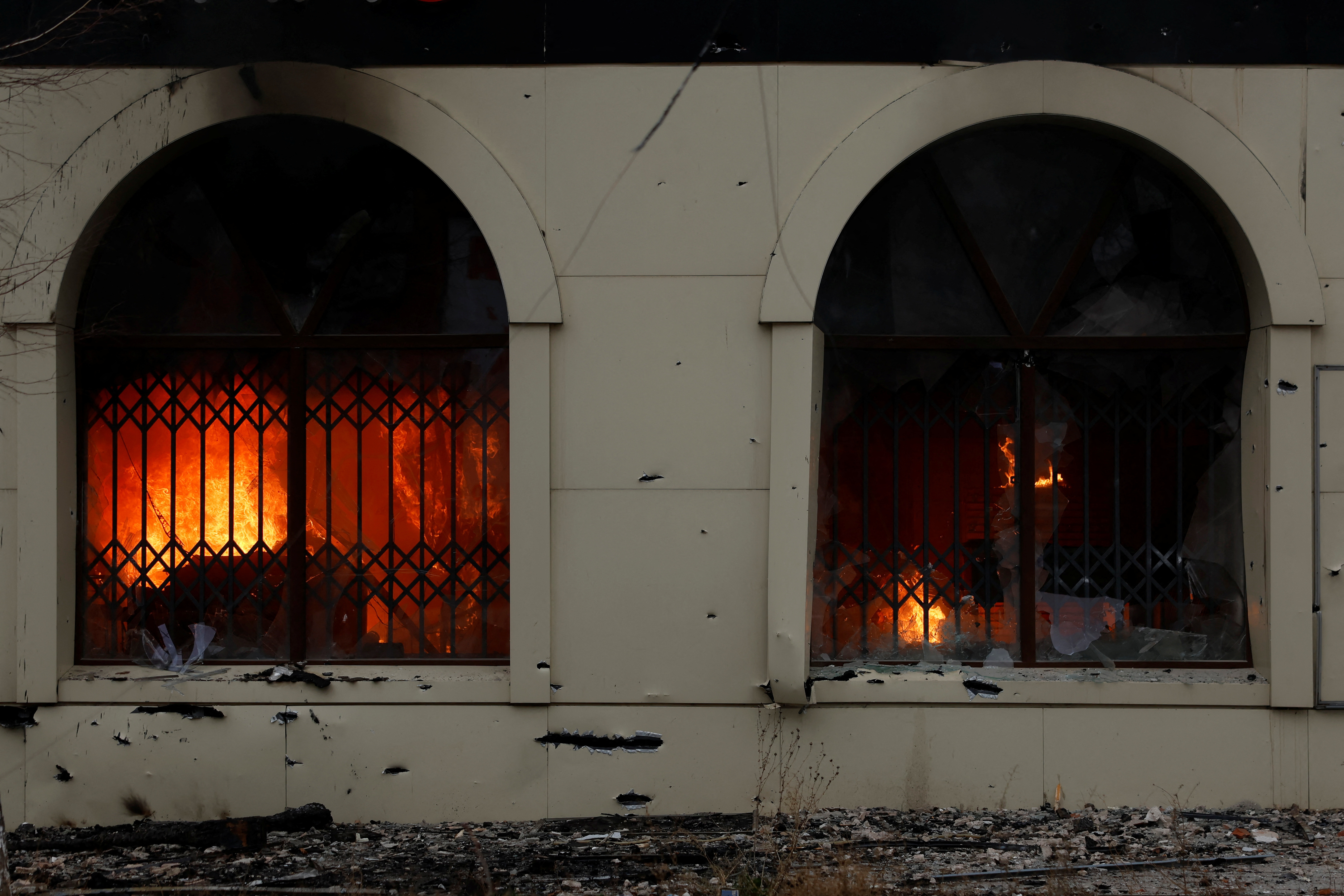 A building is seen on fire from a strike, as Russia’s attack on Ukraine continues, during intense shelling in Bakhmut, Ukraine, December 26, 2022. REUTERS/Clodagh Kilcoyne 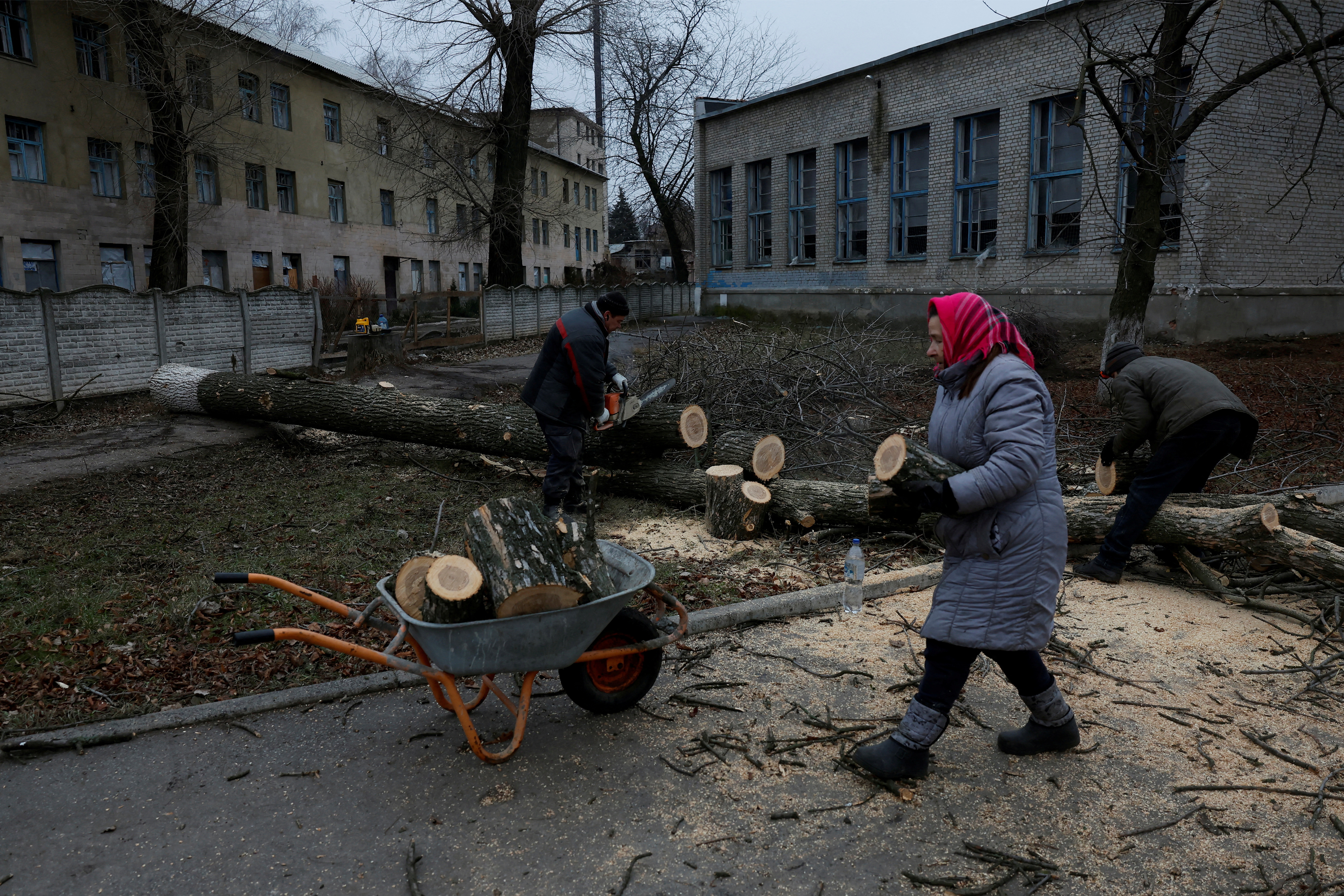 Pilaheia Mykhailivna, 73 puts wood she and her neighbours chopped up from cutting down municipal city trees, into a wheelbarrow, to burn for heat, as Russia’s attack on Ukraine continues, during intense shelling in Bakhmut, Ukraine, December 26, 2022. REUTERS/Clodagh Kilcoyne 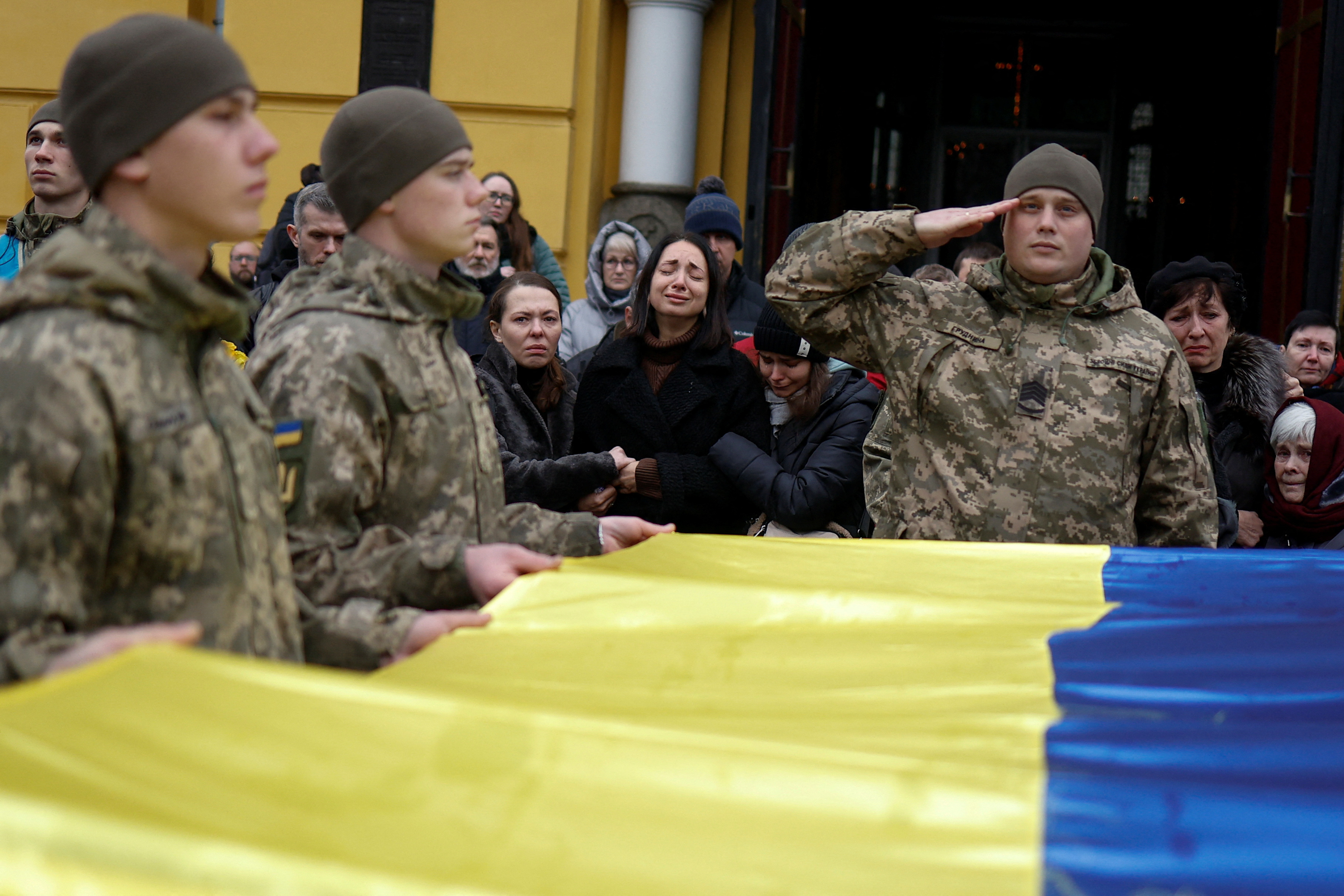 Members of the Honour Guard hold a national flag over a coffin with the body of Volodymyr Yezhov, Ukrainian serviceman and game designer for world renowned games S.T.A.L.K.E.R. and Cossacks, who was recently killed in a fight against Russian troops near the town of Bakhmut, amid Russia’s attack on Ukraine, in Kyiv, Ukraine December 27, 2022. REUTERS/Valentyn Ogirenko
获取更多RSS：
https://feedx.net
https://feedx.best