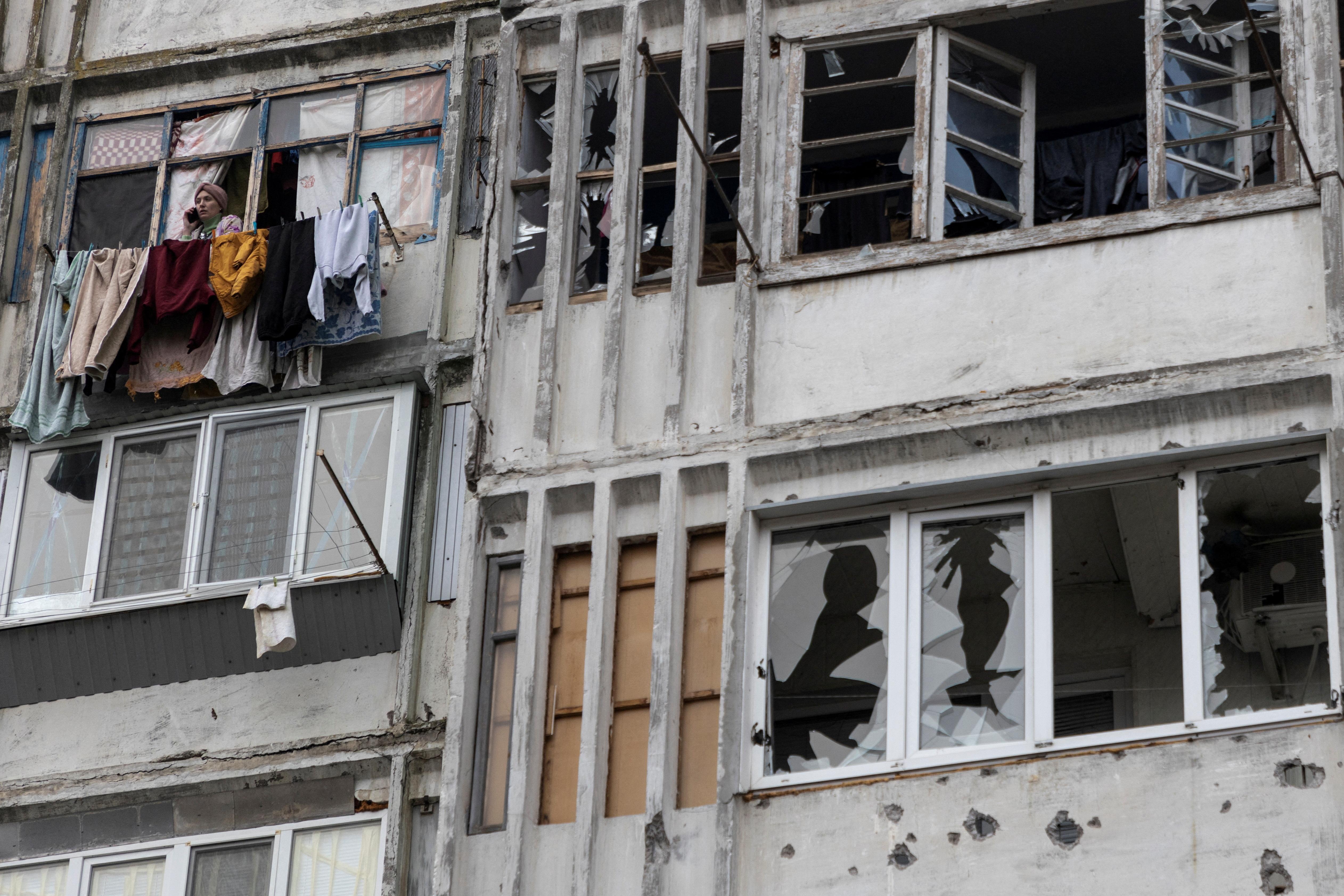 FILE PHOTO: A local woman speaks on her mobile phone in a window of a residential building damaged by a Russian military strike, amid Russia’s attack on Ukraine continues, in Kherson, Ukraine December 1, 2022. REUTERS/Anna Voitenko

Kherson has remained under bombardment from Russian forces which had retreated to the east bank of the river when the city was retaken in a major victory for Ukraine last month.

On Wednesday, the shelling hit the maternity wing of a hospital, though no-one was hurt, according to Kyrylo Tymoshenko, President Volodymyr Zelenskiy’s deputy chief of staff. Staff and patients were moved to a shelter, Tymoshenko said in a post on Telegram.

“It was frightening … the explosions began abruptly, the window handle started to tear off … oh, my hands are still shaking,” Olha Prysidko, a new mother, said. “When we came to the basement, the shelling wasn’t over. Not for a minute.”

Zelenskiy, in a video address, urged Ukrainians to hug loved ones, tell friends they appreciate them, support colleagues, thank their parents and rejoice with their children more often.

Russia invaded Ukraine on Feb. 24. Kyiv and its Western allies have denounced Russia’s actions as an imperialist-style land grab. Russian President Vladimir Putin calls it a “special military operation” to demilitarize its neighbour.

Russian gas exports to Europe via pipelines collapsed to a post-Soviet low in 2022 as its largest customer cut imports due to the Ukraine conflict and a major pipeline was damaged by mysterious blasts, Gazprom data and Reuters calculations show.

But Moscow dismissed it on Wednesday, reiterating Kyiv must accept Russia’s annexation of the four regions – Luhansk and Donetsk in the east, and Kherson and Zaporizhzhia in the south.

TASS cited Lavrov as saying that Russia would continue to build up its fighting strength and technological capabilities in Ukraine. He said that Moscow’s mobilised troops had undergone “serious training” and while many were now on the ground, the majority were not yet at the front.

“Our national colours are today an international symbol of courage and indomitability of the whole world,” he said in an annual speech held behind closed doors.

On the battlefront, Russia shelled more than 25 settlements around Kherson and Zaporizhzhia, the General Staff of Ukraine’s Armed Forces said on Wednesday. The Kherson region, at the mouth of the Dnipro, serves as a gateway to Russian-annexed Crimea.

Heavy fighting persisted around the Ukrainian-held city of Bakhmut, in the eastern province of Donetsk, and to its north, around the cities of Svatove and Kreminna in Luhansk, where Ukrainian forces are trying to break Russian defensive lines.

Kharkiv Mayor Ihor Terekhov said in a Telegram post that the city had come under attack twice, “presumably” from Iranian Shahed drones, five of which Ukraine’s eastern air command separately reported downing over the city of Dnipro.