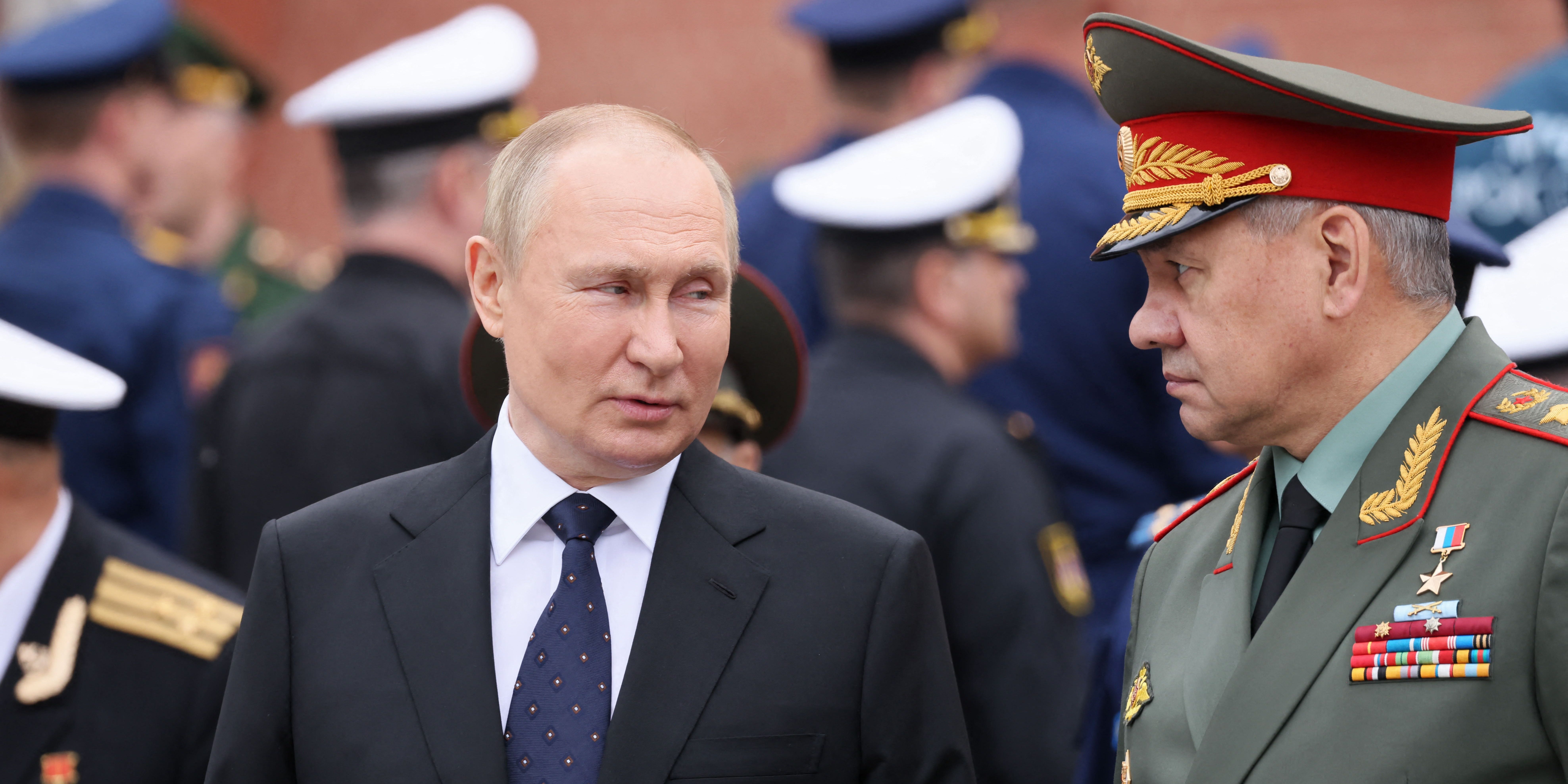 Russian President Vladimir Putin (L) speaks with Russian Defence Minister Sergei Shoigu during a wreath-laying ceremony at the Tomb of the Unknown Soldier in the Alexandrovsky Garden near the Kremlin wall in Moscow on June 22, 2022.

A recent Ukrainian strike killed scores of Russian troops, highlighting a series of command failures that put soldiers in a vulnerable position in the first place. Moscow’s response to the deadly incident has only made things worse and hasn’t really addressed any of the problems that caused it.

Security experts told Insider that the incident highlighted Russia’s “lack of skill at the tactical level,” referring specifically to their inability to lead and safely house troops in a combat zone. Moscow’s response though has been to excuse command failures by blaming troops and fabricating revenge strikes.

Russia said that nearly 90 soldiers were killed in the attack — a rare disclosure of battlefield losses. Ukraine’s military, however, placed the death toll at a much higher figure of around 400 people. These estimates could not be independently verified.

The attack sparked sweeping criticism and condemnation of Moscow’s military leadership by prominent lawmakers, government officials, and military bloggers. They complained that the Kremlin placed troops near ammunition storage, allowed them to use cellphones that emit location data, and stationed them within firing range of Ukrainian weapons.

“Having that many military personnel that concentrated, together on a battlefield like that, in artillery range, is kind of operational and tactical malpractice” on the part of command, Ian Williams, a fellow in the international security program at the Center for Strategic and International Studies, told Insider.

A lack of oversight, discipline, and awareness

Moscow was quick to blame the deadly HIMARS attack on its own troops, attributing the losses to their use of  cellphones, saying that this allowed Ukraine to determine their position and conduct the strike. This story, however, was dismissed by some in Russia — such as a war reporter who was previously honored by Putin — and also in Ukraine by senior military officials.

It’s unclear if cellphones played a role in the strike. If they did, it is unclear if Russian troops were explicitly told not to use their phones and did anyways, or if these rules were actually enforced. “In any case, it’s a lack of oversight, it’s a lack of discipline, or a lack of awareness,” Williams said. 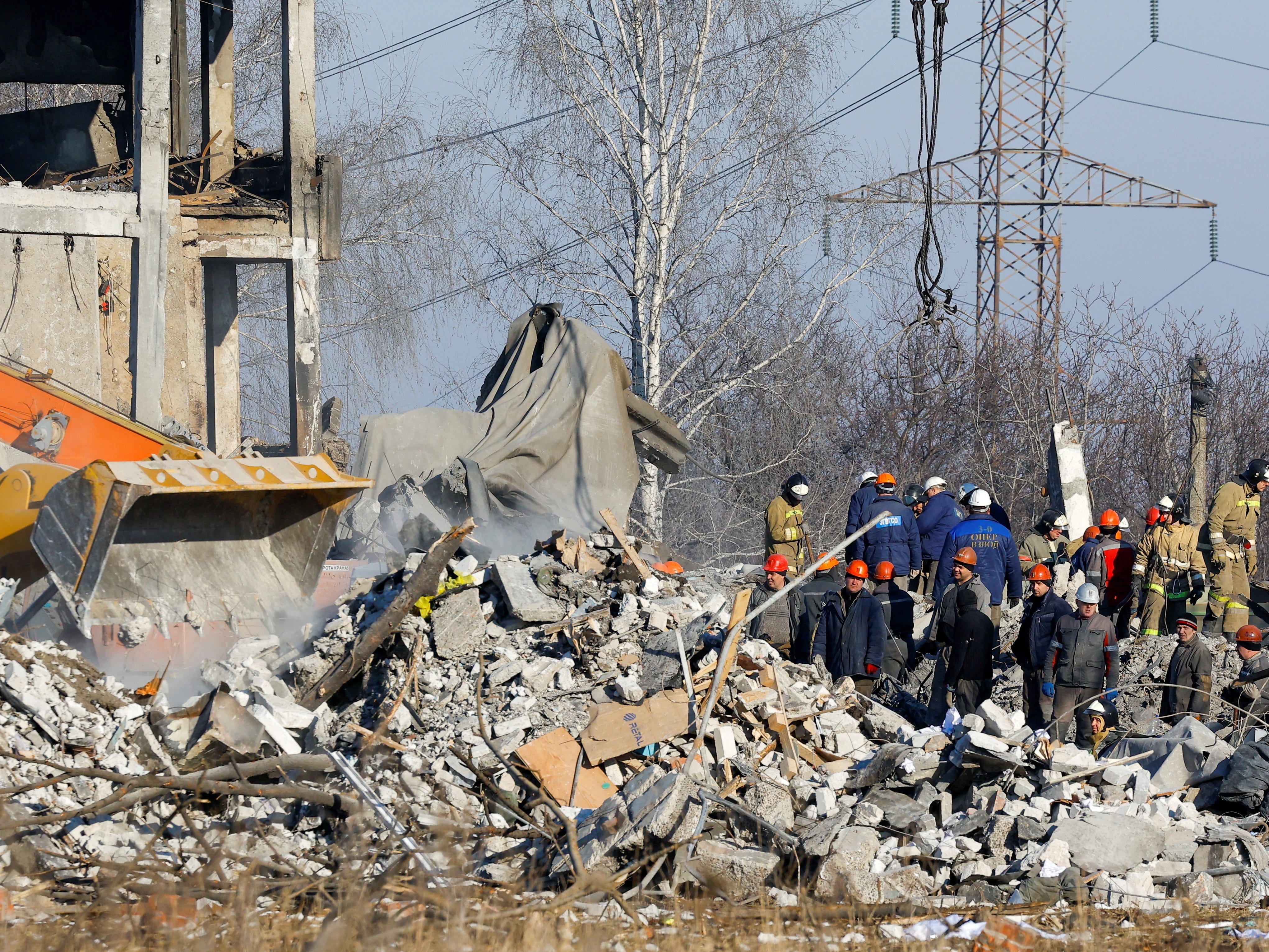 The aftermath of the strike in Makiivka on January 3, 2023.

Battlefield cellphone usage by Russian troops has been a constant issue plaguing Putin’s military throughout his war in Ukraine, which has used their data at times to pinpoint their locations.

Still, Moscow’s rush to slap the blame on its own troops triggered criticism among Russians, who accused the Kremlin of trying to pin responsibility on anyone but itself.

Williams said one theme he’s noticed with Russia’s constant “screw-ups” is Moscow’s “blaming down,” where military leadership tends to buck-pass responsibility to those below. This can be attributed to Russia’s dependence on strong “top-down leadership,” he said, adding that there’s no corps of non-commissioned officers, which makes it difficult to instill good practices and behaviors.

Beyond mismanaging cellphone usage, assuming that played a role, Russian command failures that ultimately led to such a high death toll appear to have included the physical location where the troops were stationed — within firing range of Ukrainian weapons systems and near the storage of ammunition. 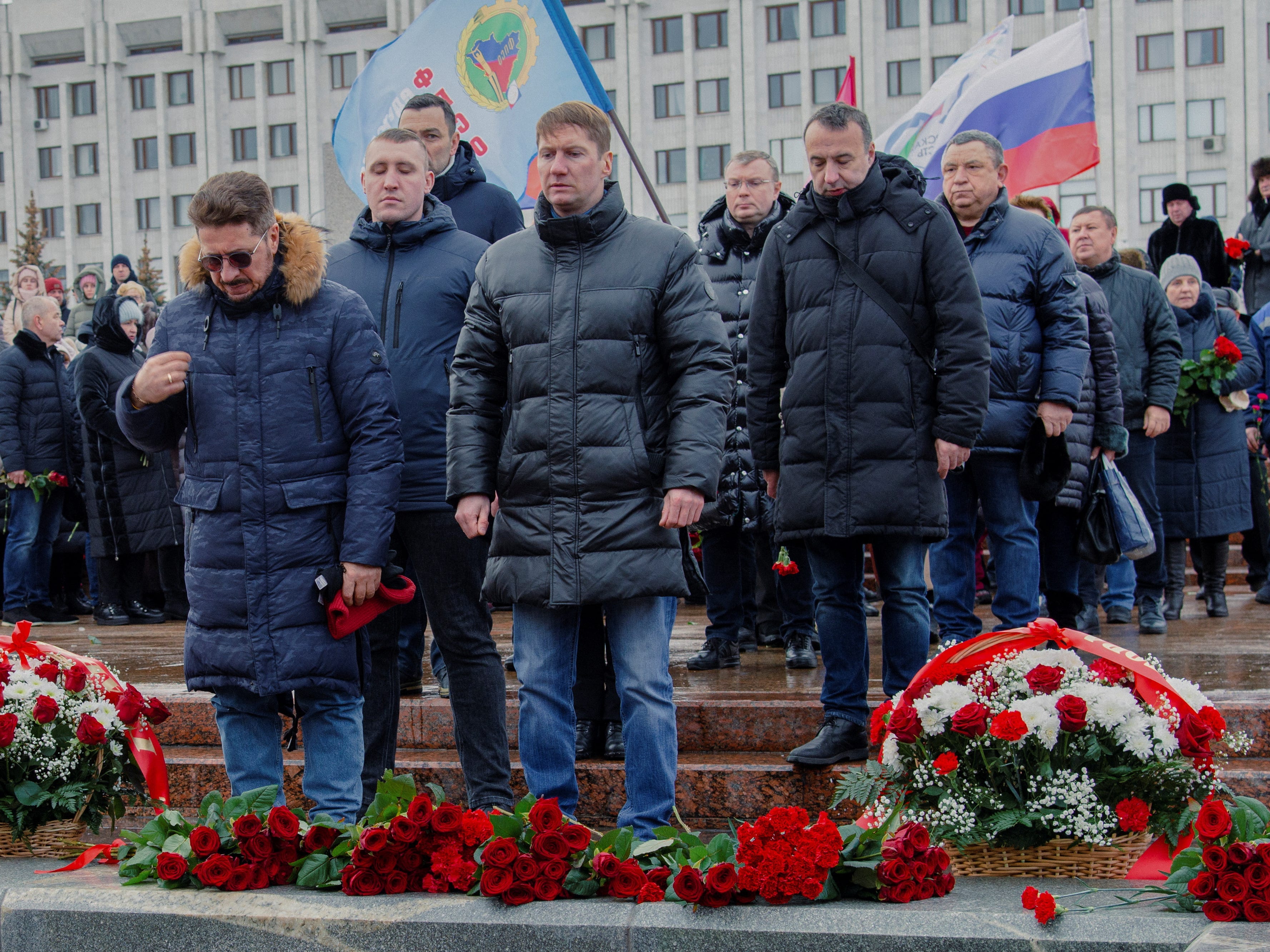 People take part in a ceremony in memory of Russian soldiers killed in Makiivka in Glory Square in Samara, Russia, on January 3, 2023.

Britain’s defense ministry shared in an early January intelligence update that the extent of the damage in Makiivka indicated there was a “realistic possibility” that ammunition was being stored near Russian troop accommodations at the time and detonated during the strike, causing secondary explosions.

“The Russian military has a record of unsafe ammunition storage from well before the current war, but this incident highlights how unprofessional practices contribute to Russia’s high casualty rate,” the ministry said.

Andrew Metrick, a fellow with the defense program at the Center for a New American Security, said that some elements of the incident can be attributed to declining Russian military morale and quality. But another key aspect is the inherent “fog and friction” that comes with a prolonged war, where decisions are made without too much forethought, he said. This has become a problem for Russian command.

“A huge part of military training is stalling that degradation in command and degradation in skill that happens as you become much more tired and weary,” he added.

A ‘lack of skill at the tactical level’

Russia later went on claim that it killed hundreds of Ukrainian troops in a retaliation strike in the eastern city of Kramatorsk. But there doesn’t appear to be any evidence supporting the Kremlin’s narrative — journalists, local politicians, and military personnel have all reported no signs of casualties at the site.

Russian messaging on the “so-called revenge strike” shows that the government is “trying to put a positive spin on this for their population,” Metrick said. It backfired though, as Russian milbloggers expressed anger with Russian military leadership after it came out that Russia’s claims were made up.

Critics said that Russia’s defense ministry regularly makes false claims and expressed dissatisfaction with the leadership for fabricating a story of revenge rather than addressing the failures responsible for Russian losses, according to a recent Institute for the Study of War report.

The Ukrainian strike on Makiivka is not the only time where Kyiv has been able to take advantage of Russian command failures during the nearly 11-month-long war, either. Mistakes and blunders have cost Putin’s military at various stages of the conflict, including as early as the attempted capture of Kyiv. 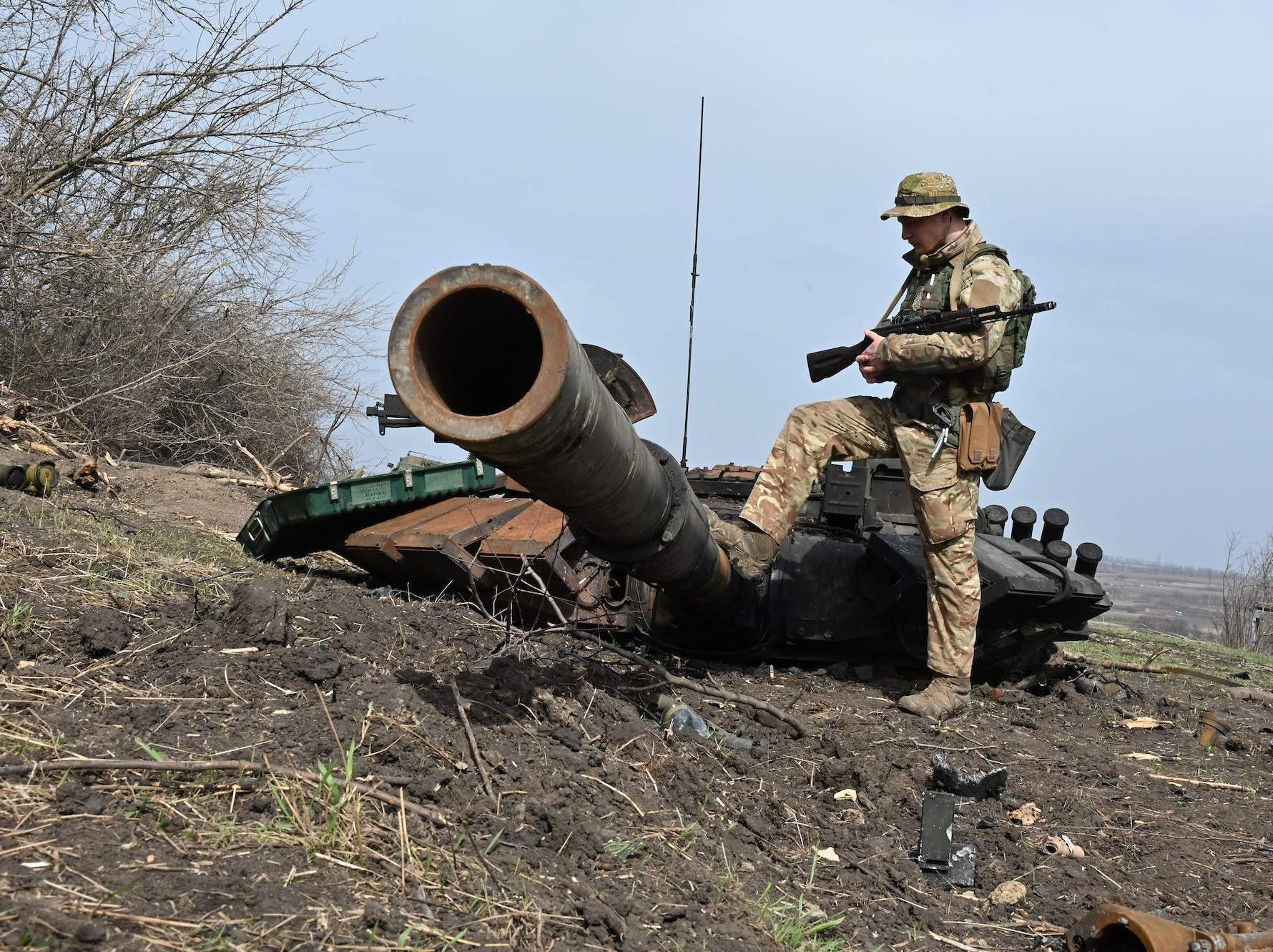 A Ukrainian soldier checks a wrecked Russian tank outside of the village of Mala Rogan, east of Kharkiv, on April 1, 2022.

At the tactical level, the Russians have “not always been very skillful” when fighting in Ukraine,” Mark Cancian, a retired US Marine Corps colonel and a senior advisor with the CSIS security program, told Insider, and that has come as a surprise to many given that Moscow’s military underwent a number of reforms after the 2008 war with Georgia.

“The Russians have shown some lack of skill at the tactical level, however, they’ve been able to continue their operations,” Cancian said. These operations that Moscow has been able to pull off include the evacuation from over the Dnipro River in Kherson and the withdrawal from around the Kyiv area.

He said it’s important to keep an eye on whether an incident like Makiivka happens again.

“War is a harsh teacher, but it does teach,” Mark said. “If this is the last time we hear something like this, maybe the Russians learned their lesson and took all the cellphones away. But if we see this happen again, then that means maybe they are not picking up and disseminating these war-fighting skills.”

Home » Audio Sources - Full Text Articles » A string of Russian failures got scores of troops killed in a Ukrainian strike, and Moscow’s reaction only made things worse
a