As Russia continues its assault on Ukraine, the Atlantic Council’s Digital Forensic Research Lab (DFRLab) is keeping a close eye on Russia’s movements across the military, cyber, and information domains. With more than seven years of experience monitoring the situation in Ukraine—as well as Russia’s use of propaganda and disinformation to undermine the United States, NATO, and the European Union—the DFRLab’s global team presents the latest installment of the Russian War Report.

The Russian army has been implementing defensive facilities in the Kherson region since October, preparing for either a Ukrainian army advance or an organized retreat. Russian forces remain entrenched in various parts of Kherson and southern Ukraine. Ukrainian forces reportedly damaged a rail bridge north of Melitopol that served as a critical supply route for Russian troops.

After the successful Ukrainian counteroffensive in Kherson, Russian forces are likely to increase attacks on critical infrastructure, such as factories and warehouses. On November 19, the Russian armed forces attacked the Motor Sich plant in Zaporizhzhia with Iranian drones. Video emerged on Telegram of explosions at the site of the attack. The plant manufactures aircraft engines and industrial marine gas turbines.

Russian forces are also expected to escalate the front line in the Donetsk region after the retreat at Kherson. The situation remains dire in Bakhmut, a strategically important city that has seen months of fighting as Russia attempts to capture the territory, which would provide the Russian army with an opportunity to launch an offensive. According to the Guardian, hundreds of soldiers from both sides are killed or wounded on the Bakhmut front on a daily basis. The fighting on the front includes artillery fire, with Ukrainian forces managing to inflict losses on Russian units with precision-guided shells. Bakhmut is heavily fortified and has sustained significant damage. Ukrainian forces also conduct patrols inside the city, fearing possible infiltration behind the defensive line.

Ukraine’s Zaporizhzhia nuclear power plant was shelled on November 19 and November 20, according to the International Atomic Energy Agency, which warned that such attacks risk causing a nuclear disaster. Russia and Ukraine blamed each other for the attack on the facility, which is in Russian-controlled territory. While some media reports claim Russian forces are preparing to abandon the Zaporizhzhia power plant, the Kremlin denies it plans to leave the facility. The Russian wartime administration recently promoted the chief engineer of the Zaporizhzhia nuclear power plant to director.

On November 23, Russia launched a large-scale missile attack targeting different regions of Ukraine, including Kyiv, where a missile hit a high-rise building. Strikes took place on critical infrastructure facilities across Ukraine, causing electrical outages that stretched from Kyiv to the western city of Lviv. Meanwhile, Moldova also experienced electrical outages as a result of the shelling in Ukraine, including in the occupied region of Transnistria. On December 1, electricity in Kherson was cut due to Russian shelling. Ukrainian authorities, fearing new attacks, began evacuating civilians from recently liberated areas of Kherson and Mykolaiv. Attacks targeting energy infrastructure will likely continue during the winter months and the new year.

On November 26, a Russian Telegram channel disseminated a manipulated photo showing Polish Prime Minister Mateusz Morawiecki at a Stepan Bandera monument during his visit to Ukraine. The image was digitally modified, with the original photo of the prime minister taken at a memorial to Holodomor victims. The Russian Telegram channel Ненасытный Гардемарин (“Insatiable Gardes-Marine”) shared a false quote they alleged to have come from Morawiecki: “The memory of this great fighter against Russians will remain in our hearts forever. Bandera has always been a great friend of the Polish people.”

Stepan Bandera is a polarizing figure in Poland and Ukraine for his role in the massacre of Polish civilians in 1943-1944. The Polish fact-checking platform Konkret 24 confirmed the alleged photo at the Bandera monument was digitally modified. The prime minister’s office published authentic images taken during Morawiecki’s visit to a monument for Holodomor victims in Kyiv, where he laid a symbolic wreath. The forgery extracted the prime minister and his companion’s bodies from the original photo, flipped the image, and then added it to a photo of the Stepan Bandera statue. A Yandex reverse image search revealed that the photo of the Stepan Bandera statue previously appeared on multiple websites, including Wikipedia. 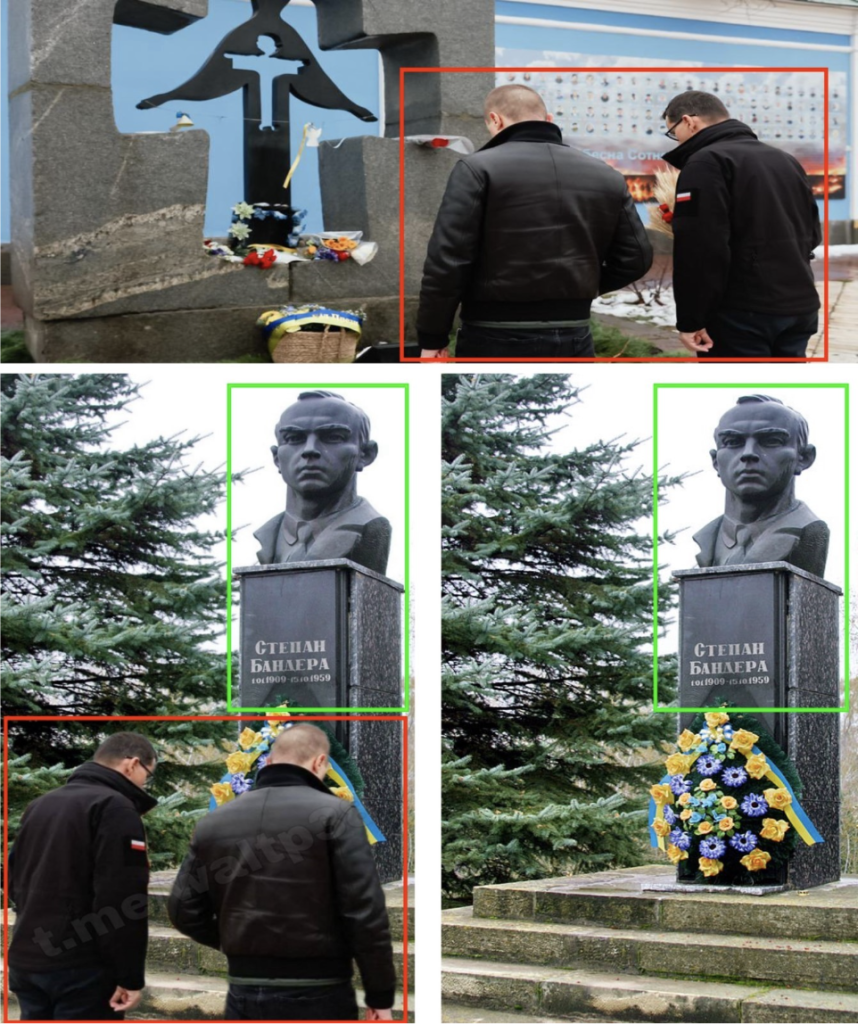 Two days before Morawiecki’s visit to Kyiv, pro-Kremlin Russian Telegram channels also spread images of forged questionnaires allegedly prepared by the Polish embassy in Ukraine. The pro-Kremlin Telegram channel Украина.ру (Ukraine.ru) asserted that the embassy organized the questionnaires to ask Ukrainian citizens whether they wanted to be under a Polish “protectorate.” The Telegram post also included a photo of a forged letter addressed to the Polish the consuls general in the Ukrainian cities of Lutsk and Lviv, asking them to conduct public opinion polls in Lviv and Volyn. According to the letter, the Consuls should submit the results of the polls to the embassy no later than November 21.

The Telegram post also contained a video of a printer making copies of the questionnaires. The documents contained the logos of two Polish organizations, the White Eagle Association of Poles (Orzeł Biały) and the Polish-Ukrainian Cooperation Foundation (PAUCI). The forged documents are written in Ukrainian. Konkret24 translated the documents and found three questions visible in the video regarding the respondent’s nationality, whether they count on Poland increasing support for Ukraine, and a partially obscured question appearing to ask their thoughts on a Polish protectorate over the Volyn region.

A spokesperson for the Polish foreign ministry denied the questionnaires were authentic. “Entries regarding the preparations for the referendum on joining the western regions of Ukraine to Poland are disinformation,” he stated.

The alleged forgery appears to be another attempt to trigger disputes between Poland and Ukraine. The DFRLab has previously reported on similar false claims that Poland intends to occupy the Western part of Ukraine.

Russian armed forces reportedly killed a family on November 18 in the village of Komysh-Zoria, Zaporizhzhia, according to Ukrainian news agency Ukrainska Pravda, citing anonymous law enforcement officials and Ukrainian security services. The online Ukrainian publication Obozrevatel also reported on the killing, claiming that pro-Russian militants from the Donetsk People’s Republic and soldiers from Ossetia drove into the occupied settlement to Pochtovaya Street, where the family had lived.

On November 23 , members of the European Parliament voted to adopt a resolution designating Russia as a state sponsor of terrorism. The final vote was 494 in favor and fifty-eight against, with forty-four abstentions. The resolution was in response to Russian atrocities in the war against Ukraine, including strikes against hospitals, schools, shelters, and other civilian targets. The resolution also called for the Russian state-backed Wagner Group and Chechen forces led by Ramzan Kadyrov to be added to the European Union’s list of persons, groups, and entities involved in terrorist acts.

The US Department of Defense submitted a purchase order for the production of UKR/TPQ-50 lightweight anti-mine radars for use in Ukraine. These radars can track the trajectory of mortar fire at up to ten kilometers, calculating the location of the mortar. The order is scheduled to be completed in June 2023.

According to Bulgarian Minister of Defense Dimitar Stoyanov, Bulgaria will send at least nine Boeing C-17 Globemasters to Ukraine. Bulgaria has sought logistical assistance from the US and the United Kingdom to help deliver the shipment of military transport aircraft.