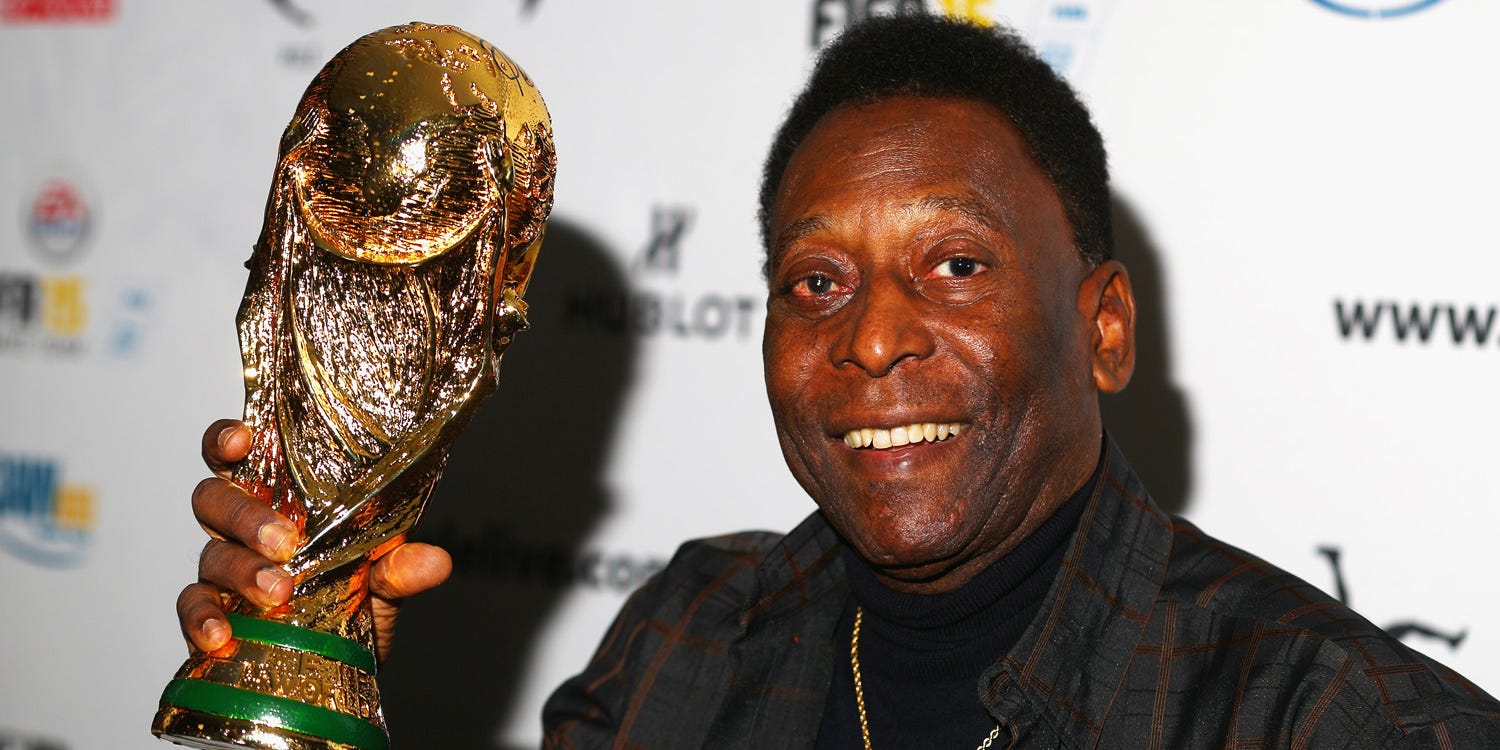 Edson Arantes do Nascimento, the legendary soccer player and Brazilian ambassador better known as Pelé, died on Thursday of colon cancer. He was 82.

His doctors at a hospital in Brazil told the Associated Press last week that his cancer had progressed and that he was under “elevated care.” His agent, Joe Fraga, confirmed his death to the AP on Thursday.

Growing up in poverty, Pelé and his friends used to play soccer on the streets using a sock stuffed with rags. The origins of the name Pelé are unclear, but the man himself said he used to hate the nickname before learning to embrace it.

Showing a natural skill for the sport, Pelé eventually joined a youth team coached by the former Brazilian national team player Waldemar de Brito. De Brito convinced Pelé’s family to let the 15-year-old move away from home to play soccer, and Pelé eventually landed with Santos, a Série A club in Brazil. It didn’t take long before Pelé began practicing and playing with the regulars on the team, and at 15, he led the league in goals. 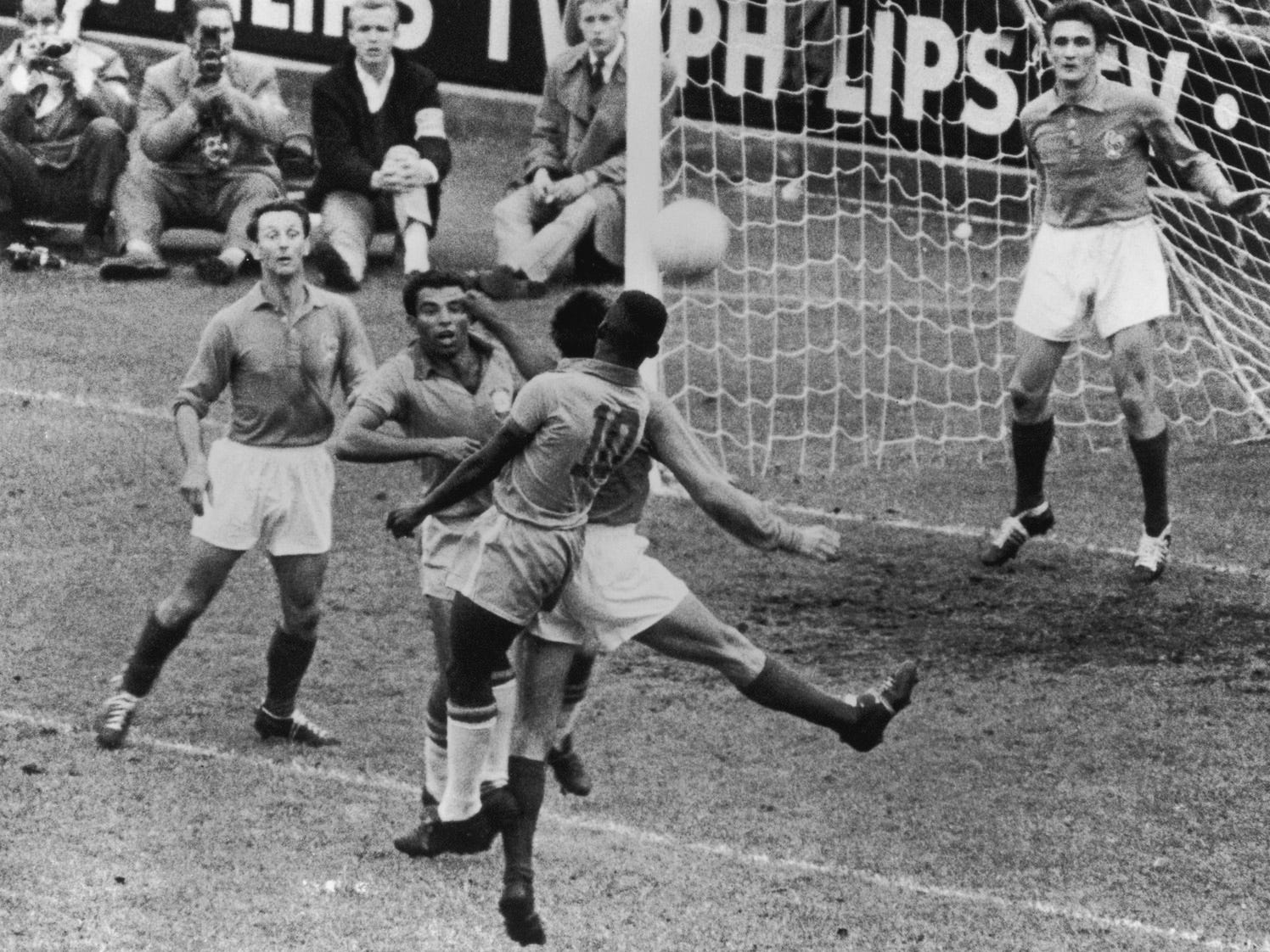 By 16, Pelé made the Brazilian national team and was playing in the 1958 World Cup in Sweden. The youngest player in World Cup history, he quickly made a name for himself, scoring five combined goals in the semifinal and final to bring home the trophy to Brazil.

Pelé’s star ascended from there. He stayed with his Brazilian club, Santos, but traveled the world as the club put on high-profile matches to take advantage of its star player. It’s believed Pelé was paid about $150,000 each year, making him the highest-paid team-sport athlete at the time.

Pelé’s style on the field also helped him become a transcendent star. He was capable of shooting with both feet and was known for his precision, with both his shot and his passes. He was as complete of an offensive player as there was in soccer, winning the Ballon d’Or seven times during his career. 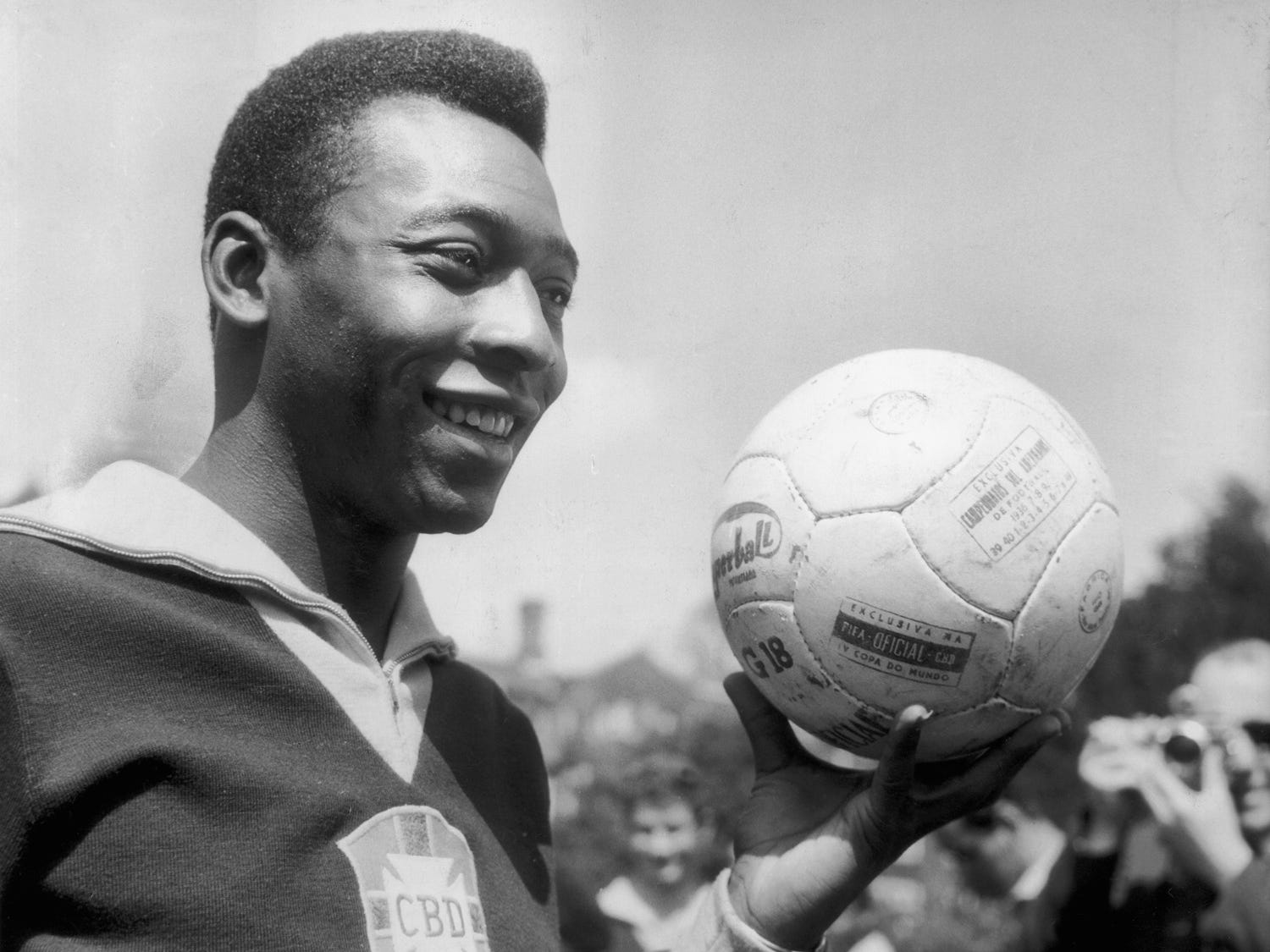 Even as Pelé’s star grew bigger, he struggled with injuries during the 1962 and 1966 World Cups as teams geared their defenses toward him. Pelé logged a goal and an assist in the first match of the 1962 World Cup but injured himself in the second match. Brazil went on to win without him.

In the 1966 World Cup, Pelé played in only two of three games, scoring one goal, as Brazil was eliminated in the first round.

In 1970, Pelé got World Cup redemption, going into Mexico with a Brazilian squad some considered the best team ever. Pelé promised a better performance after some in the football world expressed doubts about his ability, and he delivered, scoring four goals with six assists to lead Brazil to its third World Cup. 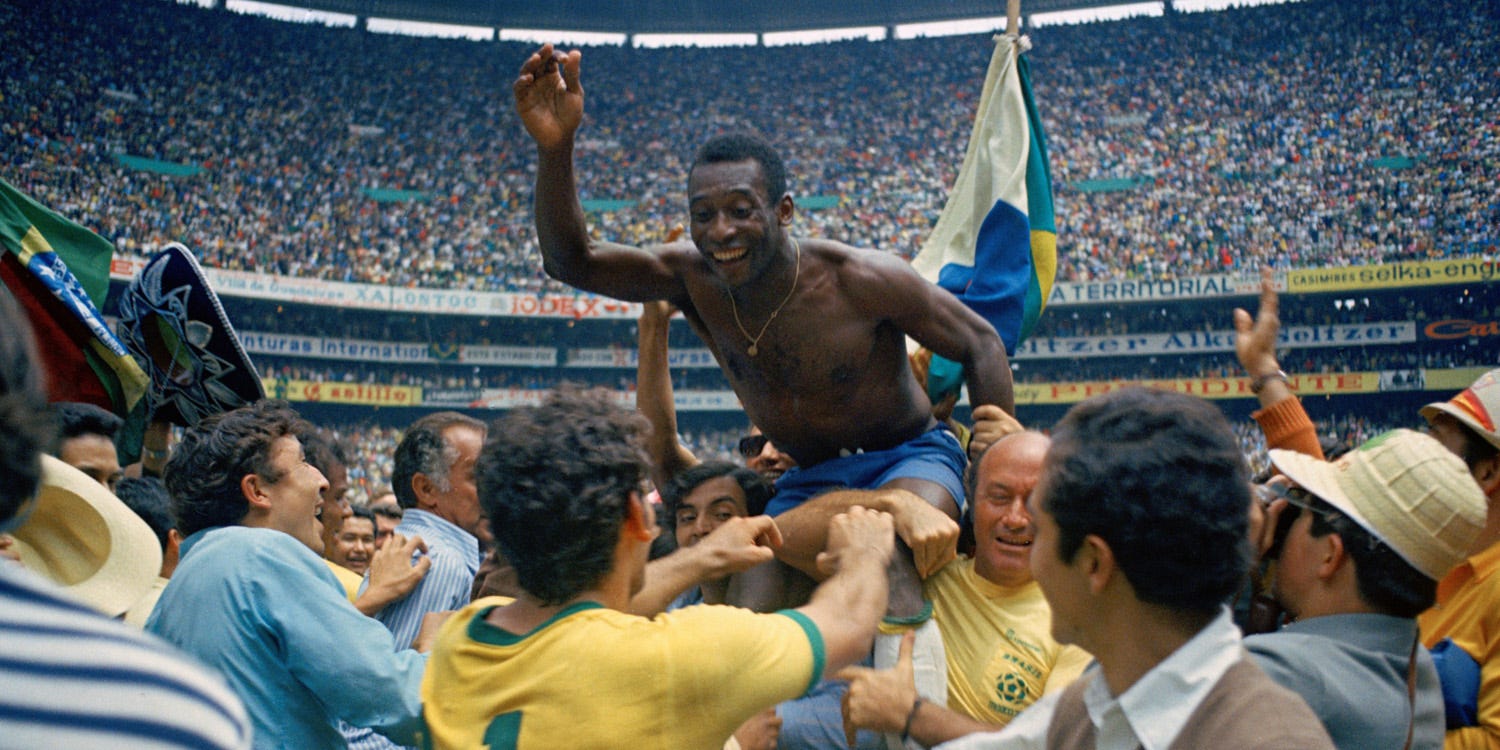 Pele celebrates at the 1970 World Cup.

Pelé’s popularity soared around the world. A study in the early 1970s found that Pelé was the most widely recognized name in the world after Coca-Cola. It’s been reported that in 1967, the two factions in the Nigerian civil war announced a two-day truce to see Pelé play in Lagos.

Pelé retired in 1974 but eventually came back to play for the New York Cosmos of the North American Soccer League, signing a three-year, $2.8 million contract. He led the Cosmos to the league championship in 1977 and retired the same year.

Even after retiring, Pelé remained a global figure, acting as an ambassador to football and Brazil. In 1978, he received the International Peace Award for his work with UNICEF. In 1984, he was appointed as Extraordinary Minister of Sport to Brazil by then-president Fernando Henrique Cardoso. One of the signatures pieces of legislation that Pelé helped pass was called “Pelé Law,” which, among other things, aimed to reduce corruption within Brazil’s professional clubs.

In 1992, Pelé was named as an ambassador to the United Nations for ecology and the environment.

As a result of his post-career ambitions, Pelé has been graced with several other awards and titles. He was knighted by Queen Elizabeth II in 1997, named to TIME’s “100 Most Important People of the 20th Century,” and received an honorary degree from the University of Edinburgh in 2012 for his “significant contribution to humanitarian and environmental causes, as well as his sporting achievements.” 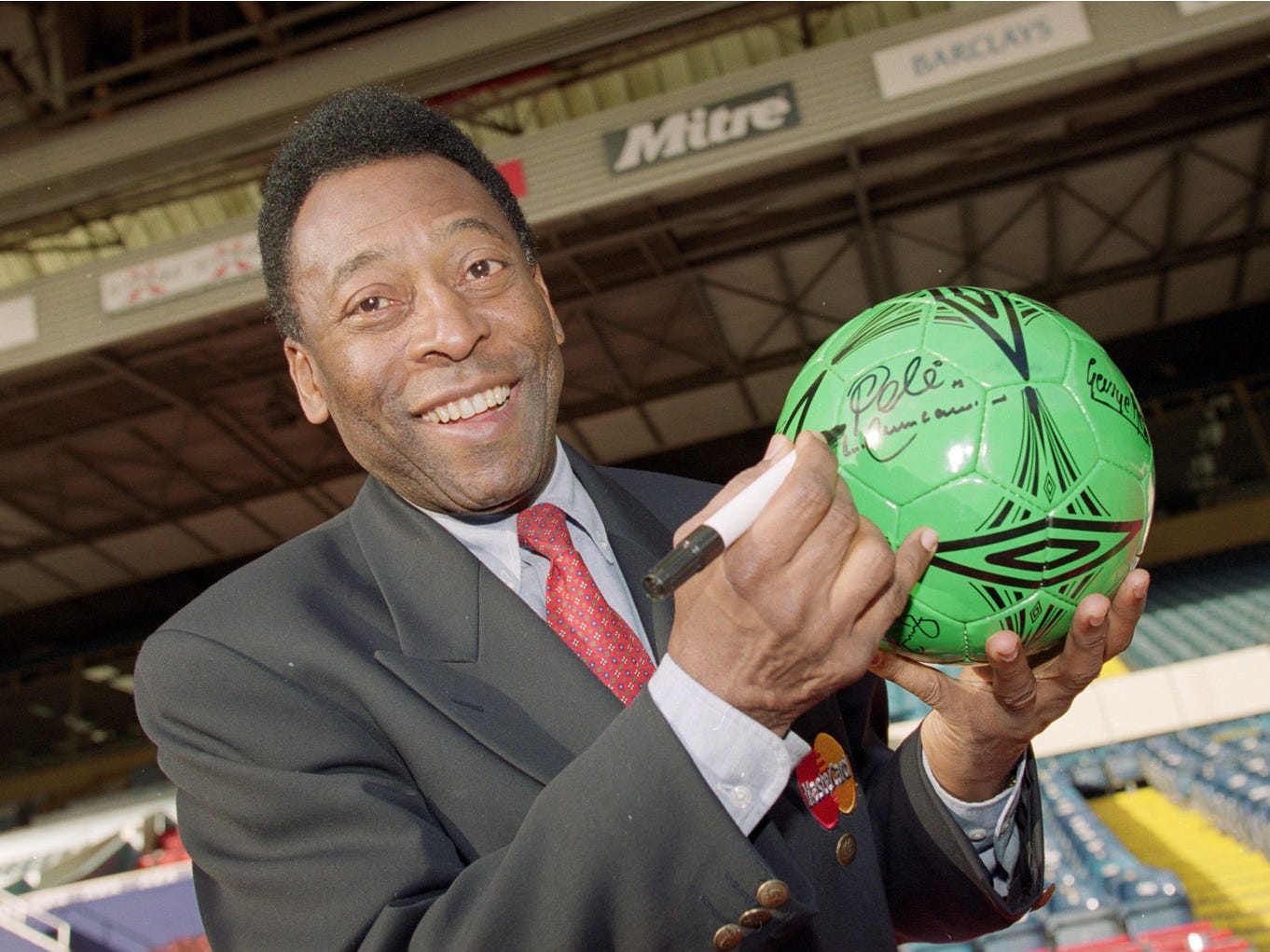 Santos remained a global ambassador to soccer well after his playing days.

Pelé also remained a popular figure in international sports. He took part in World Cup draws, inaugurations and ceremonies and was involved in various Olympic opening and closing ceremonies. He helped Brazil secure the bid for the 2016 Olympics and was slated to be part of the opening ceremony but pulled out due to health concerns.

Pelé was married three times, producing five children. He divorced his first two wives and had two other children through affairs, one of whom was a daughter he did not recognize as his daughter through her death in 2006. In 2016, at age 75, Pelé got married for a third time to businesswoman Marcia Cibele Aoki, 50, who he called his “definitive love.”

Throughout his life, Pelé was renowned as one of the greatest soccer players ever. In 1970 Manchester United defender Paddy Crerand was asked, “How do you spell Pelé?” He responded, “G-O-D.”

Pelé, too, was aware of his international stardom. Once asked about being compared to Jesus, Pelé is reported to have said, “There are parts of the world where Jesus Christ is not so well known.”