In November, France’s senate approved a law which would require the owners of almost all large parking lots to install solar panels. They would have to cover 50% of the lots’ surface area by 2028—or face a heavy monthly fine. If the legislation passes as expected in its final reading at the National Assembly in December, the French government expects it will add 11 gigawatts (GW) of solar capacity to the national grid.

France’s law has been met with huge enthusiasm by clean-energy advocates, who say solar parking lots can help clear a massive hurdle to renewable rollouts: land scarcity. Carbon-free power sources like solar, wind, and hydropower all take up much more space than the dirtier fuels that they’re meant to replace (coal, oil, and gas): analysis by Bloomberg News found that a solar farm needs 140 times more land than a natural gas plant to produce the same amount of power.

In the U.S., more than 90% of people support developing more solar farms, per Pew Research, and officials want to build between 760 and 1,000 GW of solar capacity to meet the Biden Administration’s goal of 100% carbon-free electricity by 2035. Yet from Texas to Virginia to Maine, attempts to turn land over to solar have sparked fierce local protests about the loss of farmland, natural areas, and views.

But the one thing the U.S. has no shortage of? Parking. By designing its major cities around the car in the 20th century and forcing developers to include parking in almost every project, the U.S. has built up hundreds of millions of parking spaces—far more than in France. As of the early 2000s, parking covered 2–5% of urban land in the U.S., and it’s likely even more now. 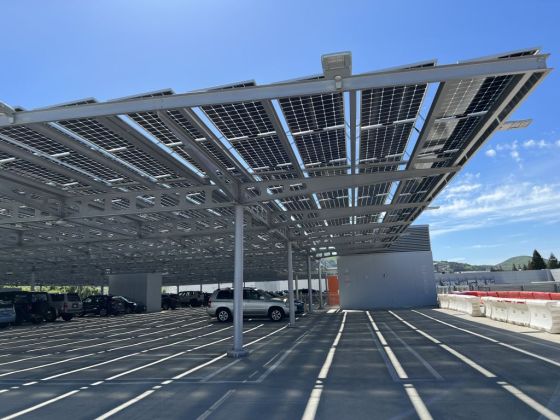 Some big-box stores have already spotted the potential of solar parking lots: Walmart and Target are experimenting with them in California and Arizona, generating clean energy and shade for their customers’ cars. Michelle Davis, principal solar analyst at energy consultancy Wood Mackenzie, estimates that roughly 10–15% of the 21.4 GW total community and commercial solar so far installed across the U.S. is found on carports (the term for the structure built over a parking space to hold solar panels.)

There are significant financial and political barriers to repeating France’s policy in the U.S., but the opportunities are big. We dug into the data to find out how big. Here are some very rough estimates.

How much solar power could the U.S. generate on its parking lots?

First off, we’ve got to note that France’s law won’t apply to all of the country’s parking lots. It exempts lots smaller than 80 spaces and lots designed predominantly for trucks. The law also gives planning authorities discretion to exclude parking lots where “technical, safety, architectural, heritage and environmental constraints” prevent solar installation, as well as lots that are mostly shaded by trees (since they wouldn’t generate much solar power anyway), and lots where, for whatever reason, it would be extremely expensive to do it.

There are very little data on what share of U.S. parking lots fall under those exclusions, and estimates for the amount of land taken up by parking in the U.S. vary widely. For that reason, our estimates only offer an idea of the maximum potential of solar parking.

To start, we first looked at a 2019 report from the U.S. Geological Survey, which attempts to calculate the proportion of land in each county of the U.S. mainland taken up by parking lots in 2012. That research estimates that parking lots cover 13,778 square miles, or 0.47% of the U.S.’ total contiguous land area. If we take 50% of that land—per the requirement of the French law—we would have 4,822 square miles on which to install solar. Going off industry standard sizes for 400 watt solar panels, that’s enough land to install 3,376 GW of solar capacity.

Now, that’s a pretty crazy number. For comparison, the total amount of power capacity in the U.S. in 2021, for all energy sources, was 1,144 GW.

For a more conservative estimate, we looked to a 2010 study published in the journal Environmental Research Letters. It offers five possible numbers for the number of U.S. parking spaces. On the extreme upper end, the researchers estimate that the U.S. would have 2 billion parking spaces—of which, 569 million would be in surface parking lots, according to the study’s lead author Mikhail Chester. Applying the same method as above, that would give us roughly 1,632 square miles—enough to hold 800 GW of solar capacity under the French law.

Toward the lower end, in a scenario “intended to capture the conservative ‘known’ inventory,” the study says there are 730 million spaces—of which 300 million would be in surface lots, giving 861 square miles of relevant parking area. We could fit 422 GW of solar on that land.

Even that is staggering. It’s approximately 450% more than the U.S.’s current solar power capacity of 74.9 GW. Adding all that parking solar power would also account for nearly a half of the government’s maximum 2035 solar goal of 1,000 GW, without eating up any land that could be used for agriculture, wildlife, or housing.

There are plenty of reasons why the U.S. will probably never get anywhere near 422 GW of solar on parking lots. For one thing, a significant share of the parking spaces we’re factoring in are likely in lots smaller than 80 spaces, meaning it wouldn’t make logistical or economic sense to install solar on them. They would be excluded from the French law.

For another, political opposition to the government telling private landowners how to use their land would likely be stronger in the U.S. than in France. If the federal government ever tried to push a policy like France’s out nationwide, it would likely face legal challenges from state governments. 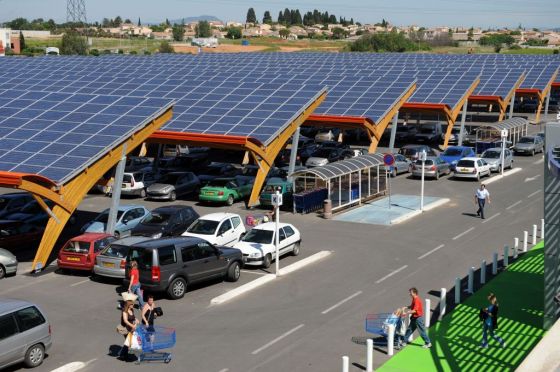 Pascal Guyot—AFP/Getty ImagesA solar covered parking lot at a supermarket in Saint-Aunes, a town in the south of France, in 2008.

Parking lots are also a more expensive site for solar than rooftops. “You’re not just slapping the panels on some racking,” Davis says. “You’re building out steel infrastructure to hold them up. You’re digging into the ground to get electrical lines from parking lots to go to a nearby building or substation or distribution line.” The average cost of building out 1 kilowatt of parking lot solar in the U.S. is $2,780, compared to $1,800–2,000 for rooftop solar, per Wood Mackenzie. That means it would take longer for power generated by a parking lot solar system to offset the cost of installation, making them a harder sell. That’s especially true in cloudier parts of the country where solar panels are less productive.

Solar parking lots may become more cost-efficient in future, though. As electric vehicles become more widely used, researchers say retailers could profit from connecting solar panels in parking lots to EV chargers and having customers pay to fill their batteries while they shop. Meanwhile utilities may start to offer better rates for purchasing electricity from commercial solar projects as they become more established in the U.S.

And with U.S. federal officials hoping to build some 30 GW of solar capacity every year between now and 2025, and 60 GW a year after that, the pressure to find land will only grow. That could make the U.S.’ outsize supply of parking—considered a blight by most environmentalists—a weapon for the energy transition.