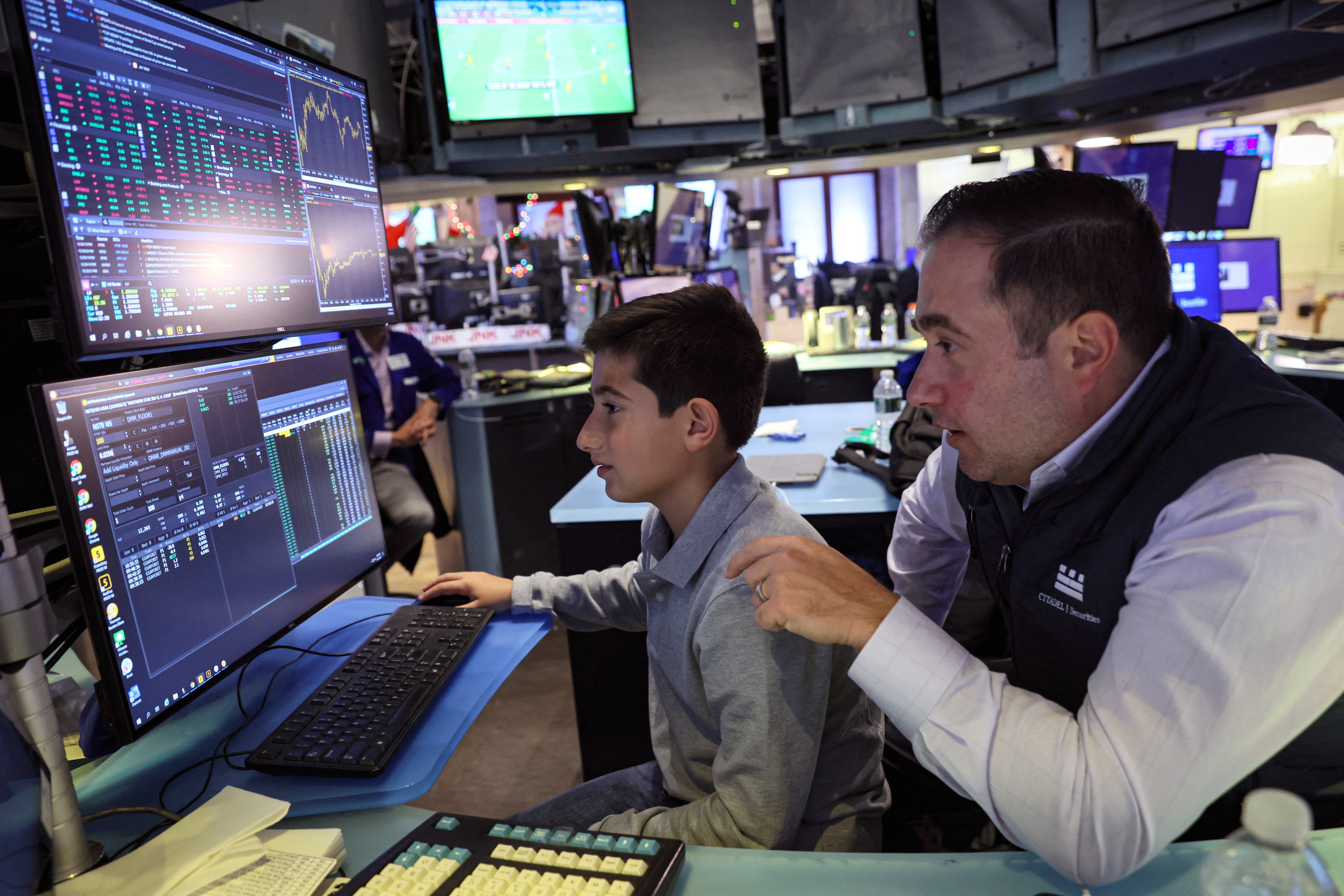 A specialist trader works with his son during a traditional bring-your-kids-to-work day on the floor at the New York Stock Exchange (NYSE) in New York City, U.S., November 25, 2022. REUTERS/Brendan McDermid

The S&P 500 ended down on Tuesday, with losses in Apple and Amazon ahead of an upcoming speech by U.S. Federal Reserve Chair Jerome Powell that could provide hints about magnitude of future interest rate hikes.

Investors also focused on recent protests against COVID-19 curbs in China, including at the world’s biggest iPhone factory.

Apple’s (AAPL.O) stock dropped 2.1%, down for a fourth straight session.

Powell is due to speak at a Brookings Institution event on Wednesday about the outlook for the U.S. economy and the labor market. Investors will be looking for clues about when the Fed will slow the pace of its aggressive interest rate hikes.

“No one is willing to buy ahead of tomorrow with Powell speaking. Everyone is nervous about what he is going to say,” said Ron Saba, senior portfolio manager at Horizon Investments in Charlotte.

The benchmark S&P 500 index (.SPX) is headed for its second straight month of gains in November amid bets that recent inflation readings showing a slight cooling in prices will lead the Fed to scale back the scale of its interest rate hikes.

The Fed has delivered four straight 75 basis point rate hikes, and it is expected to shift down the pace to a 50-bps move in December. FEDWATCH

A survey on Tuesday showed U.S. consumer confidence eased further in November amid persistent worries about the rising cost of living.

The S&P 500 energy sector index (.SPNY) rallied 1.3%, while gains in oil prices on expectations of a loosening of China’s strict COVID controls were later offset by concerns that OPEC+ would keep its output unchanged at its upcoming meeting.

Despite the S&P 500’s decline, advancing issues outnumbered falling ones (.AD.SPX) by a 1.3-to-one ratio.

Volume on U.S. exchanges was relatively light, with 9.6 billion shares traded, compared with an average of 11.2 billion shares over the previous 20 sessions.