Stock markets edged higher, European bond yields dropped and the dollar remained firm in light trading on Monday amid warnings from the International Monetary Fund’s managing director that a third of the world will fall into recession in 2023.

MSCI’s broadest index of Asia-Pacific shares outside Japan (.MIAPJ0000PUS) rose 0.06%, just short of an index of global shares, which climbed 0.16%.

However, traders were reticent to trust early-year starts in stock and bond moves with many markets closed for a holiday and ahead of a host of economic numbers due this week.

Inflation data from Europe, minutes from the December U.S. Federal Reserve meeting and U.S. labour market numbers were some of the highlights that Danske Bank chief analyst Piet Haines Christiansen said would be worth watching.

“I would be cautious over interpreting any moves this morning,” said Christiansen.

Christiansen expected the new year to kick off with a renewed focus on central banks and inflation. Traders would be vigilant for any signs of an approaching recession, he said.

Buoyant stock prices in Europe might be due, he said, to survey results published on Monday, which pointed towards a rebound in optimism among euro zone factory managers.

Elsewhere, the dollar edged almost 0.2% higher against a basket of major currencies, while the pound and euro fell 0.4% and 0.2% respectively.

“There is an attempt by the dollar index to pull higher today but we do see that it is losing a good part of the strength it gained last year,” said Ulrich Leuchtmann, head of forex research at Commerzbank.

“After the last Fed meeting, the market was not convinced that the Fed won’t cut rates later in 2023. It’s going to be an interesting year.”

U.S. Treasuries will resume trading on Tuesday after a public holiday on Monday. The benchmark 10-year yield climbed around 27 basis points (bps) last week and over 200 bps last year, ending 2022 around 3.88%.

German government bond yields on Monday tumbled from their highest levels in more than a decade amid more hawkish signals from the European Central Bank (ECB).

ECB President Christine Lagarde said euro zone wages were growing quicker than earlier thought, and the central bank must prevent this from adding to already-high inflation.

Oil markets were closed but prices in 2023 are set for small gains, as a darkening economic backdrop and COVID-19 flare-ups in China threaten demand growth and offset the impact of supply shortfalls caused by sanctions on Russia, a Reuters poll showed on Friday.

The new year is going to be “tougher than the year we leave behind,” IMF Managing Director Kristalina Georgieva said on Sunday on the CBS Sunday morning news program “Face the Nation.”

“Why? Because the three big economies – the U.S., EU and China – are all slowing down simultaneously,” she said. 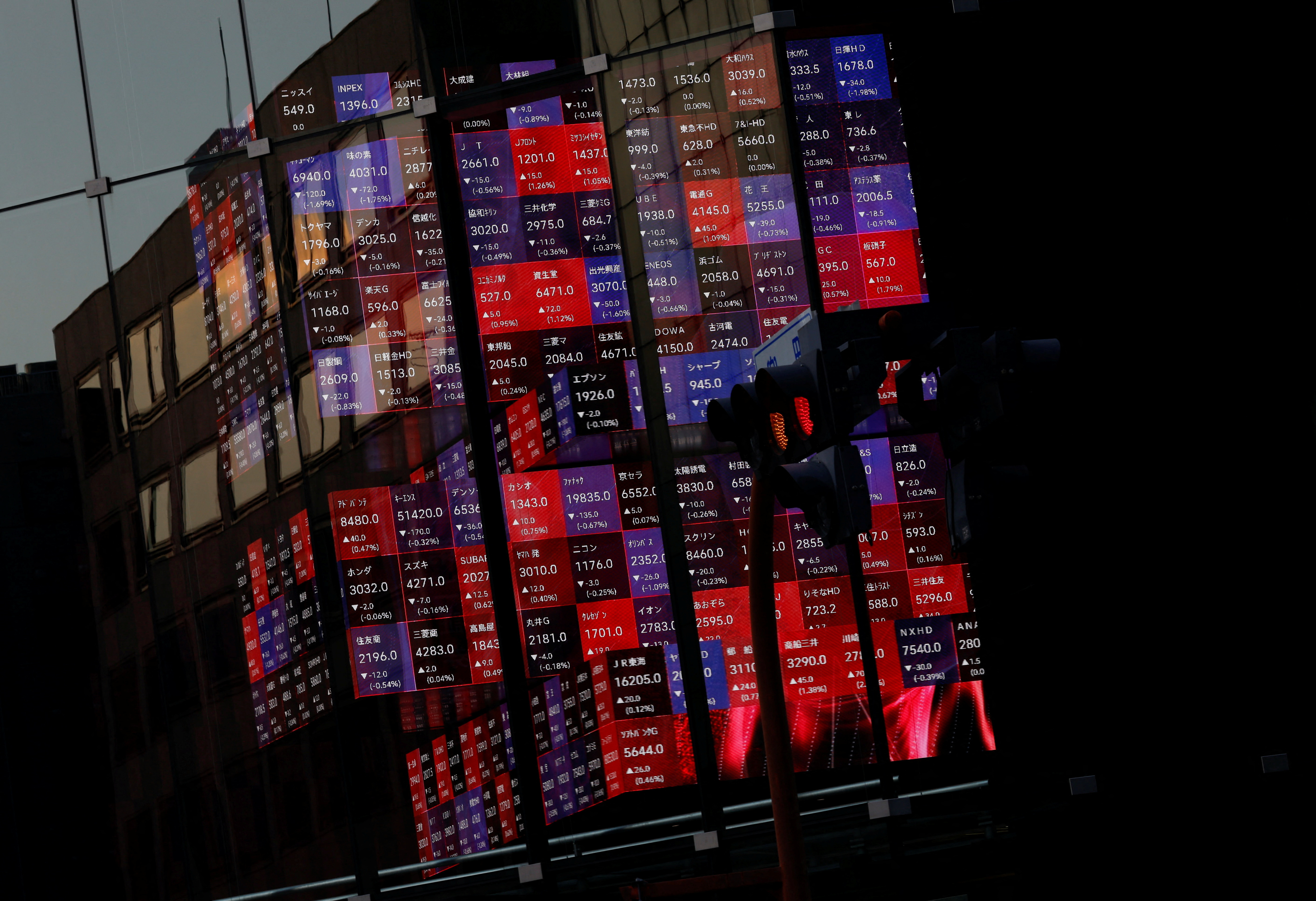 A huge electric stock quotation board is seen inside a building in Tokyo, Japan, December 30, 2022. REUTERS/Issei Kato 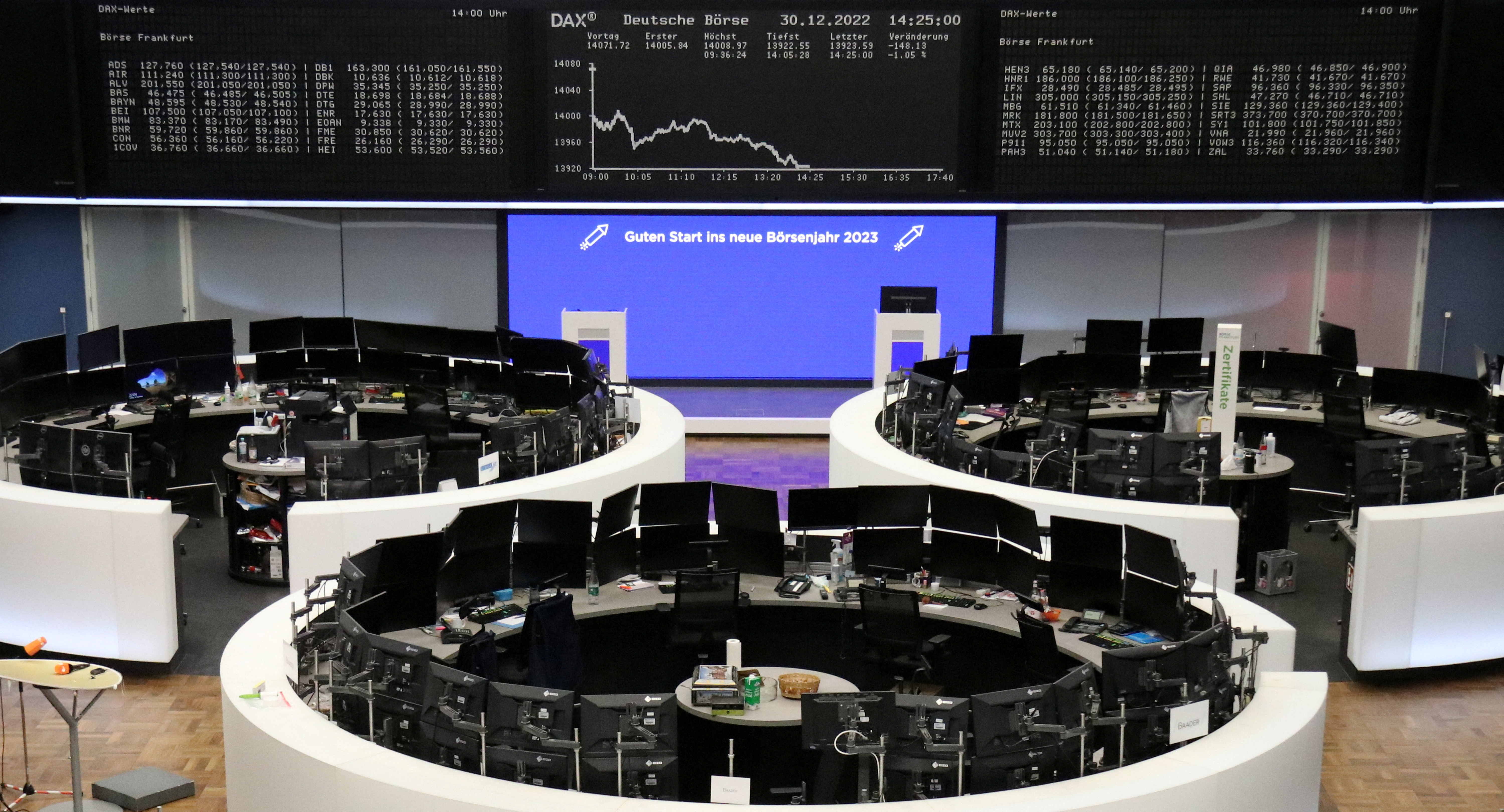