Listen to this article
2023-01-11T02:21:07Z
The latest Pacific storm unleashed torrential downpours and damaging winds in California on Tuesday (January 10), knocking out power and turning city streets into rivers as mudslides cut off highways and entire communities faced evacuation orders.

More than 33 million Californians were threatened by severe weather throughout the day as “heavy to excessive” rainfall was expected across the state, especially in southern California, as wind gusts were clocked at more than 40 miles (64 km) an hour in many places, the National Weather Service (NWS) said.

The high winds wreaked havoc on the power grid, knocking out electricity to 180,000 homes and businesses as of midday Tuesday, according to data from Poweroutage.us.

The storms have killed at least 17 people since the start of the year, California Governor Gavin Newsom said.

“This storm was different from the standpoint that it was here much longer. It was more intense because of the prior storm, the ground was much more saturated, which led to a lot more flooding and a lot more rescues because of the ground saturation,” said Barry Parker, division chief of the Ventura County Fire Department.

Experts say the growing frequency and intensity of such storms, interspersed with extreme heat and dry spells, are symptoms of climate change. Though the rain and snow will help replenish reservoirs and aquifers, a mere two weeks of precipitation will not solve two decades of drought.

Meanwhile, terrain denuded by past wildfires has created an increased risk of flash floods and mudslides.

The torrential rains, along with heavy snow in mountain areas, follow yet another “atmospheric river” of dense moisture funneled into California from the tropical Pacific.

Six atmospheric rivers have hit California in the past 17 days, dumping as much as 30 inches (76 cm) of rain in some areas, said Zack Taylor, a meteorologist with NWS’s Weather Prediction Center. At least two more were coming, starting Wednesday morning, Taylor said.

“We’re in the middle of a three-year megadrought in the entire west coast of the United States … And now here we are talking about historic floods and atmospheric rivers. Now stacking six with three more on the way,” Newsom told The Weather Channel in an interview.

“If you don’t believe in climate change, come to California. We’re living it,” Newsom said.

Much of the damage has been concentrated around the city of Santa Barbara, about 100 miles (160 km) northwest of Los Angeles, where the steep foothills slope toward the Pacific Ocean.

In the Rancho Oso area of the Santa Ynez Mountains above Santa Barbara, mud and debris across the roadway isolated about 400 people and 70 horses, the Santa Barbara County Fire Department said on Twitter, posting a photo of a vehicle stuck in the mud.

Near the coast, the California Highway Patrol closed U.S. 101, the main highway connecting northern and southern California, with no estimated time on reopening.

“Please stay home and do not drive today if at all possible,” the highway patrol advised on Twitter, posting pictures of mudslides and fallen rock that blocked the highway.

Many communities were flooded including Goleta, where a man rode his paddleboard through the streets.

On Monday, officials ordered the evacuation of some 25,000 people, including the entire affluent enclave of Montecito near Santa Barbara, due to heightened flood and mudslide risks. But evacuation orders throughout Santa Barbara County were lifted on Tuesday afternoon, the county sheriff’s department announced.

Further south in the Los Angeles neighborhood of Chatsworth, two vehicles fell into a sinkhole that opened beneath a road. 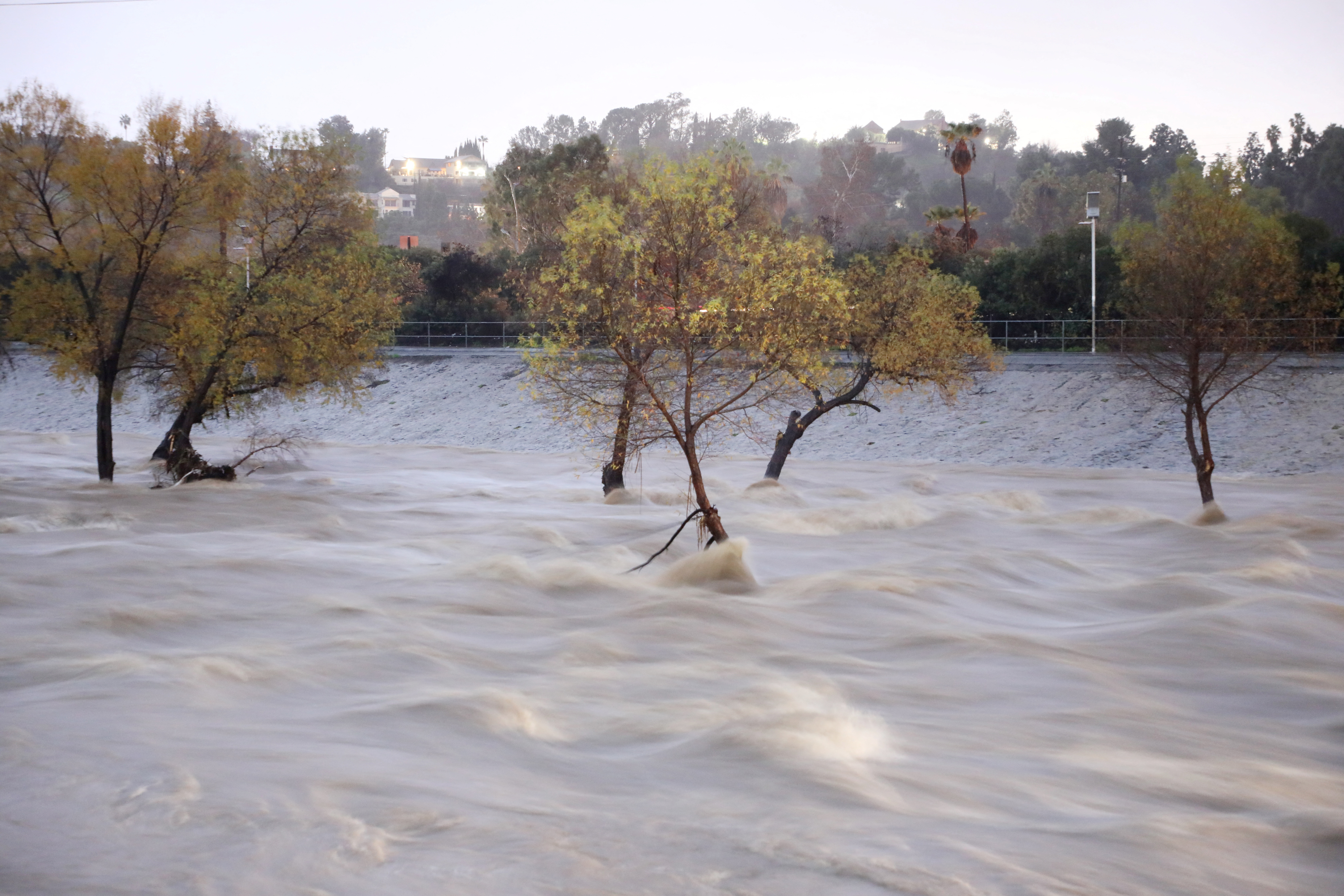 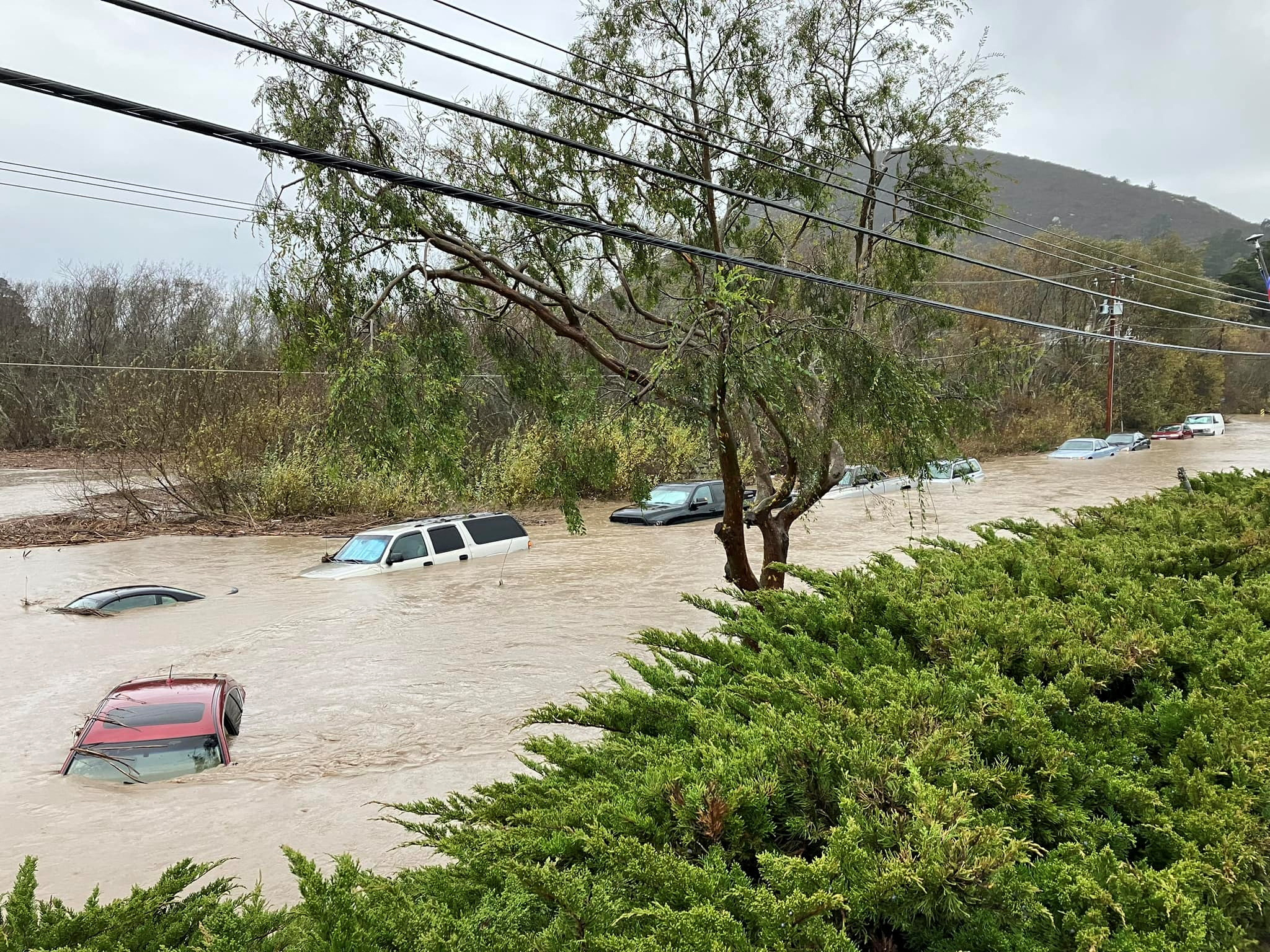 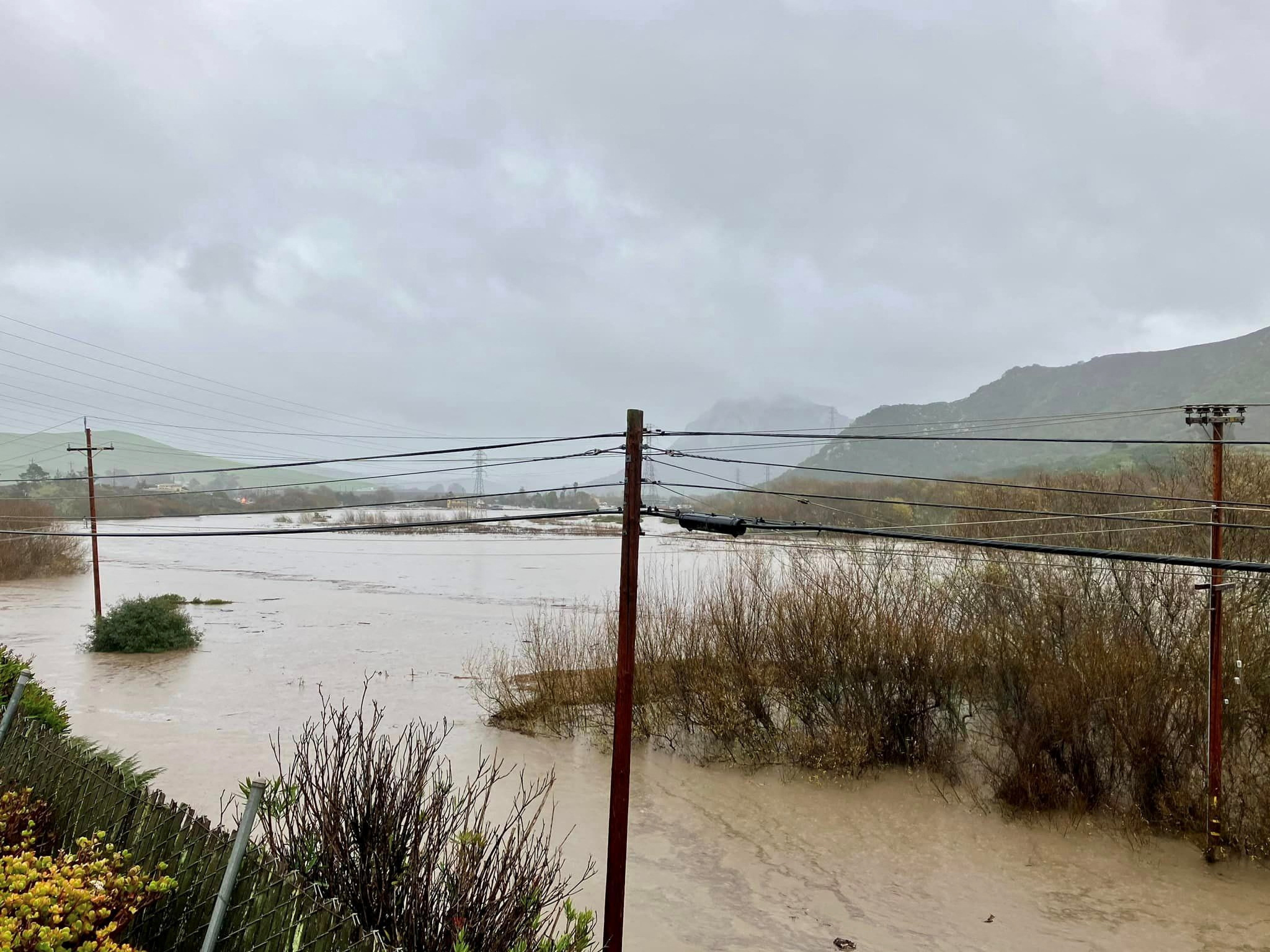