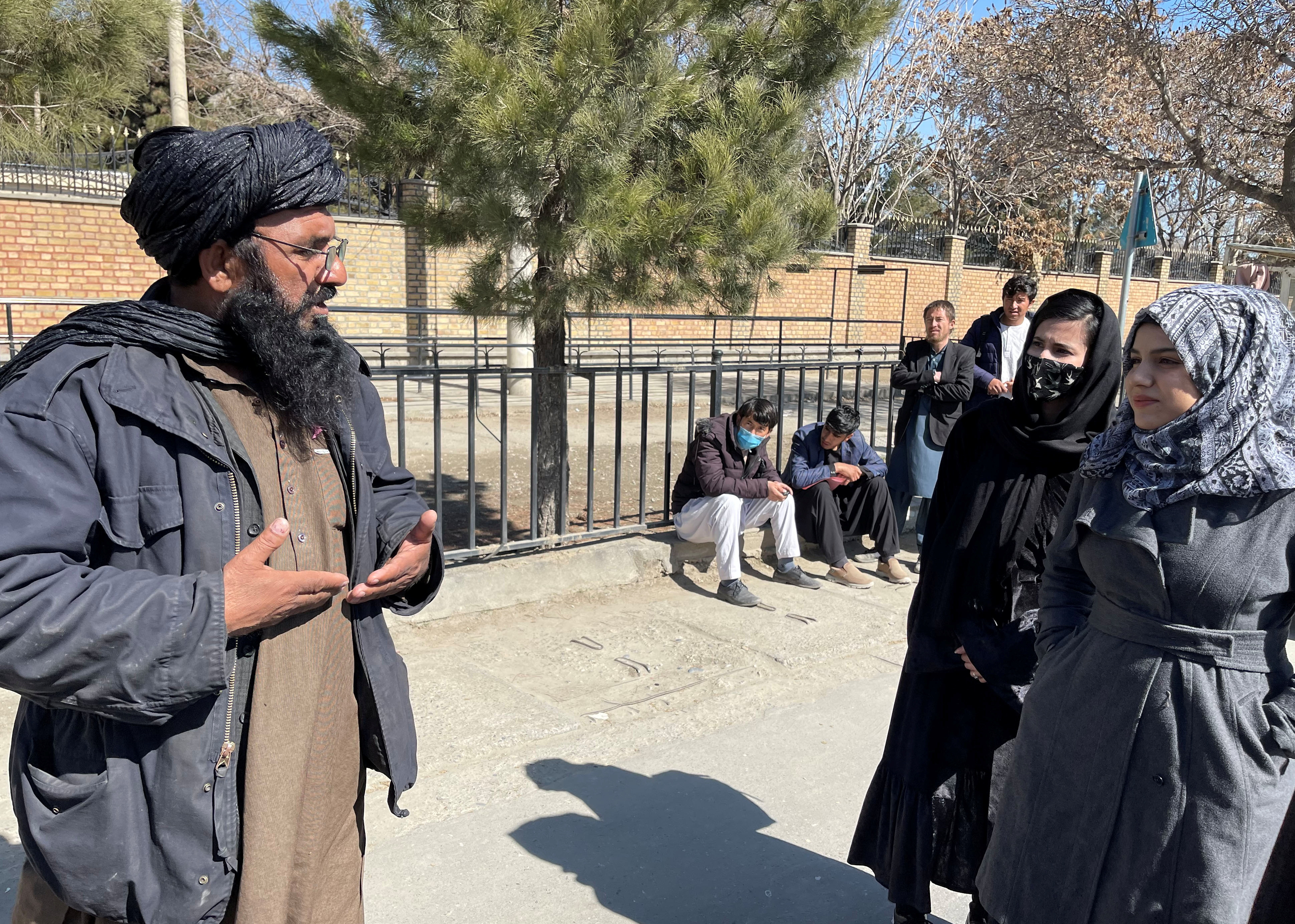 A member of Taliban speaks with female students outside the Kabul Education University in Kabul, Afghanistan, February 26, 2022. REUTERS/Stringer/File Photo

A letter, confirmed by a spokesperson for the higher education ministry, instructed Afghan public and private universities to suspend access to female students immediately, in accordance with a Cabinet decision.

The announcement by the Taliban administration, which has not been internationally recognised, came as the United Nations Security Council met in New York on Afghanistan.

Foreign governments, including the United States, have said that a change in policies on women’s education is needed before it can consider formally recognising the Taliban-run administration, which is also subject to heavy sanctions.

“The Taliban cannot expect to be a legitimate member of the international community until they respect the rights of all Afghans, especially the human rights and fundamental freedom of women and girls,” U.S. Deputy U.N. Ambassador Robert Wood told the council, describing the move as “absolutely indefensible.”

Britain’s U.N. Ambassador Barbara Woodward said the suspension was “another egregious curtailment of women’s rights and a deep and profound disappointment for every single female student.”

“It is also another step by the Taliban away from a self-reliant and prosperous Afghanistan,” she told the council.

In March, the Taliban drew criticism from many foreign governments and some Afghans for making a u-turn on signals all girls’ high schools would be opened.

U.N. spokesman Stephane Dujarric said the move on Tuesday was “clearly another broken promise from the Taliban.”

“It’s another very troubling move and it’s difficult to imagine how the country can develop, deal with all of the challenges that it has, without active participation of women and the education of women,” he told reporters in New York.

Shortly before the announcement on universities, U.N. special envoy for Afghanistan Roza Otunbayeva said the closure of high schools had “undermined” the Taliban administration’s relationship with the international community and was “extremely unpopular among Afghans and even within the Taliban leadership.”

“As long as girls remain excluded from school and the de facto authorities continue to disregard other stated concerns of the international community, we remain at something of an impasse,” she said.

The decision came as many university students were sitting end-of-term exams. One mother of a university student, who asked not to be named for security reasons, said her daughter called her in tears when she heard of the letter, fearing she could no longer continue her medical studies in Kabul.

“The pain that not only I .. and (other) mothers have in our heart, could not be described. We are all feeling this pain, they are worried for the future of their children,” she said.