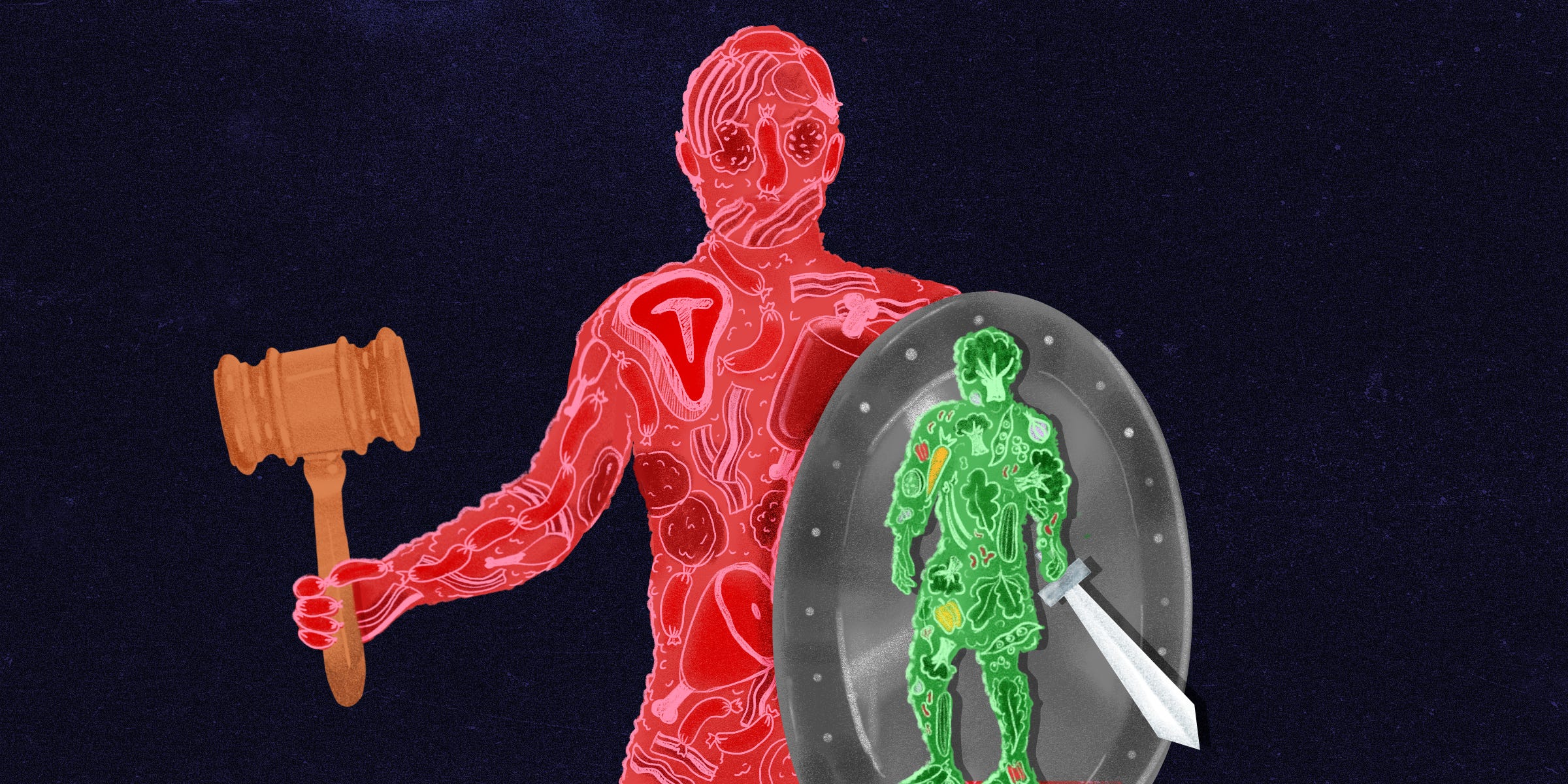 Startups that make plant-based foods are battling the meat lobby for the right to describe their products as bacon, burgers or steak.

Three wiener dogs dressed up as hot dogs stood outside the UK Parliament.

That could be the start of a bad joke, but to the man who took the dachshunds there, it was utterly serious.

Morten Toft Bech, the founder of a startup that makes plant-based meat alternatives, brought the animals in protest.

It was 2020, and the European Parliament was voting on a ban against the use of meat-related words — like sausage, bacon, burger, chicken, and steak — in the names of plant-based food.

If the ban had passed, “plant-based sausages” would have needed a different name, perhaps “plant-based tubes.” Vegetable burgers might have to be renamed “discs,” and plant-based bacon “veggie strips.”

It was a serious threat to companies like Toft Bech’s UK company Meatless Farm, which makes mince, burgers, and “chicken” out of pea, soya, and rice proteins. 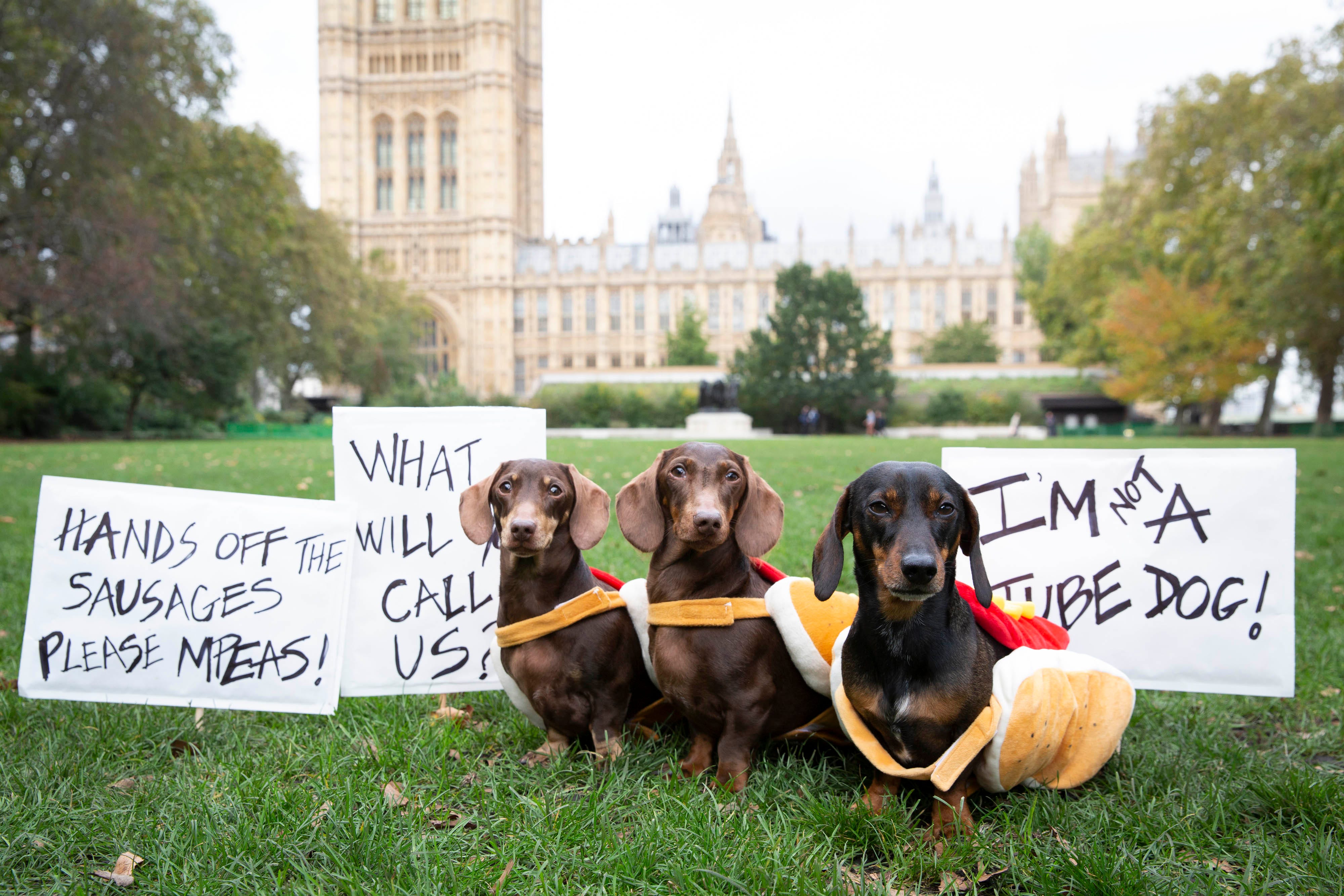 Toft Bech put miniature placards next to the dogs saying “What will you call us?” and “I’m not a tube dog,” pointing out that dachshunds, known in the UK as sausage dogs, get to use the meat-evoking word “sausage” in their name — so why couldn’t plant-based meat substitutes do the same?

The ban was rejected, but two years later the debate is far from over.

“If you look up bacon in the dictionary, it says bacon is cured meat from the back or sides of a pig,” said Sarah Morrell, a policy officer at Ulster Farmers’ Union, which is seeking to ban plant-based-food companies in Northern Ireland from using “meaty” terms for their products.

Unions like hers are on one side of a heated international battle pitting meat-alternative startups — companies often only a few years old, whose backers include wealthy NBA stars and actors — and the millennia-old farming and agriculture industry.

Startups are increasingly finding themselves in court as meat lobbies — made up of farming unions, agriculture bodies, and other organizations representing meat producers — try to stop them from using meaty words to describe their products.

And they are ready for the fight. “We are not going to get anywhere by sitting and smiling,” said Toft Bech.

It’s not clear which side is winning: Texas lawmakers are considering a ban, while Louisiana struck down a law limiting the use of certain “meat” terms in March. South Africa outlawed the use of meaty names, and its government even planned to seize some artificial meat from store shelves, until a last-minute court order paused the law from being implemented.

Meat lobbies argue that plant-based products have stolen the concept of meat without matching its taste and nutrition standards, tarnishing the integrity and cultural importance of meat.

On the other hand, companies argue their plant-based products are intuitively called the veggie version of whatever meat they are imitating, and it’s only in using terms like sausage that they can signal to consumers which product they’re positioning themselves against, and how to cook and eat it.

The cost of these legal battles could be the “kiss of death” for startups with limited resources, according to Ivan Farneti, an investor at the venture-capital firm Five Seasons Venture, which has backed the plant-based food company This.

Investment in alternative proteins — a catch-all term for nonanimal proteins — has blown up, as concern builds about the environmental and animal welfare impacts of the meat industry.

In 2021, European startups lured over $1.1 billion from venture capitalists backing plant-based, fermented, and cultivated protein, as well as edible insects, according to data from PitchBook, which tracks the venture-capital industry. The figure is up from $697 million the previous year.

But legal battles over naming are sucking time and money out of startups that could be focusing on scaling.

Meatless Farm’s Toft Bech told Insider his company had spent about 5% of its £89 million in venture-capital funding on lawyers looking after its trademarks, as part of a legal bill he describes as “insanely large for the size of company we are”. It’s defending challenges to its trademark over its use of the word “farm” in its name.

What could that money have done “if it dropped down to our bottom line?” he asked. 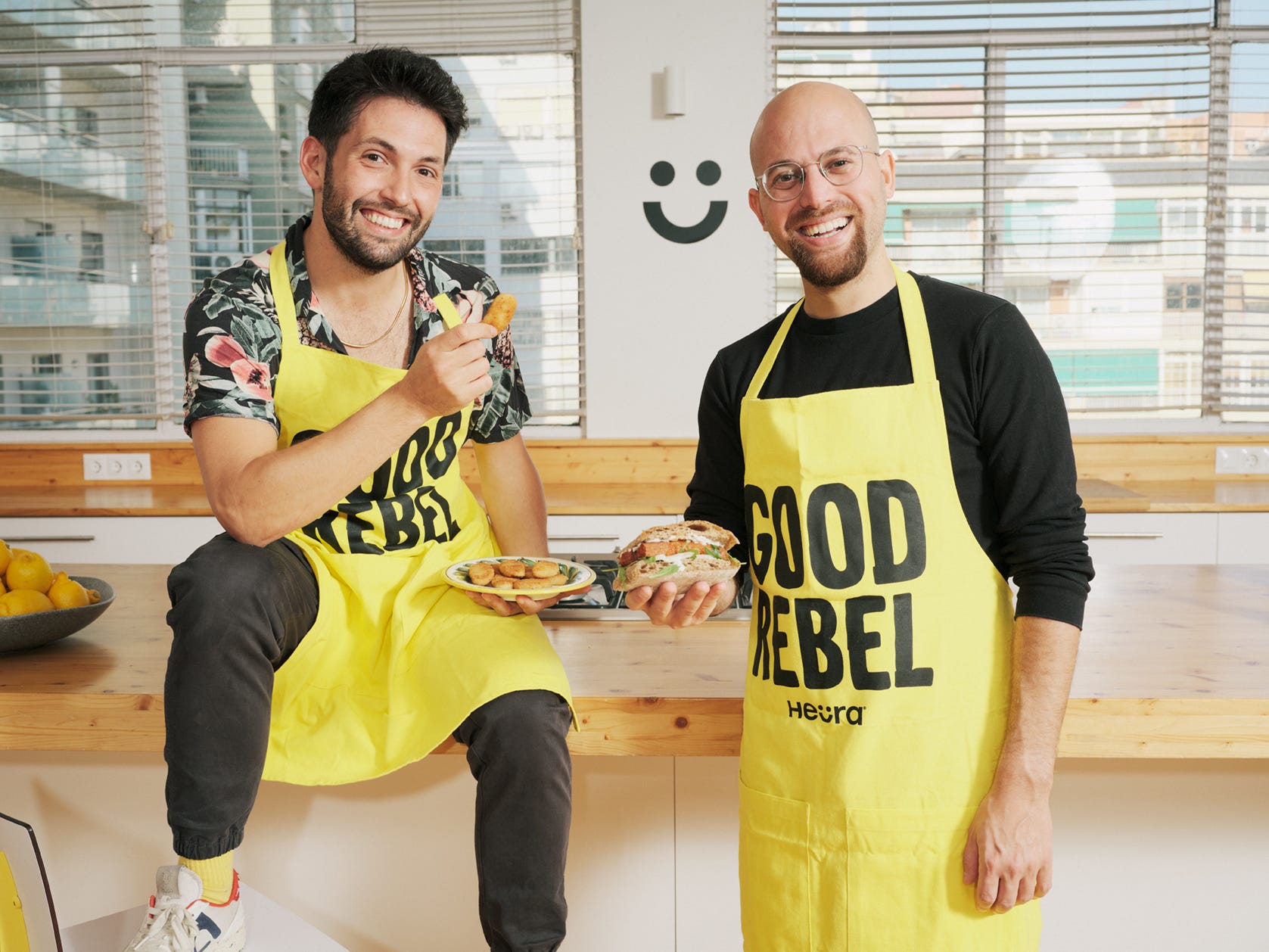 Every minute spent on legal cases is less time spent on changing the food system, according to Bernat Añaños, who cofounded Heura, a Spanish startup that makes plant-based meat substitutes and is backed by the NBA star Ricky Rubio. It has raised 36 million euros from Rubio and other backers including the venture firm Unovis Asset Management.

Heura took to Instagram to share satirical redesigns of its products if it could no longer use meaty words: Meatballs became pingpong balls, and burgers were renamed “rabbit food you can throw on the barbeque.”

“Bacon and lardons without mr piggy” is how the French startup La Vie describes its foods. They may look like meat but are made of rehydrated soya protein.

La Vie is backed by the actor Natalie Portman and is known for its playful advertising.

In July it was among a group of companies — including Nestlé — that succeeded in pausing a French ban on plant-based foods using meat-related names. The ban was the first of its kind to pass in Europe, and was introduced by the former French politician Jean-Baptiste Moreau, a cattle farmer.

“We were nervous, obviously,” said Nicolas Schweitzer, the CEO and cofounder of La Vie. Losing the case would mean rethinking the company’s branding, advertising, and packaging — letting products already packaged go to waste — and losing the meat-based names that customers have gotten to know over the years. La Vie was planning to move its manufacturing to Belgium if the ban went ahead.

He expects to be back in court at some point next year to challenge the ban again and hopes to have it thrown out.

Schweitzer told Insider the meat lobby was “just trying to slow us down.”

“It’s an intimidation strategy,” he continued, “and it’s not going to work.”

La Vie has decided to wear its legal battles as a badge of honor. It has hired an in-house lawyer and publishes details of its court cases on its website as part of its marketing.

In June, it won a case against France’s pork lobby, the French Interprofessional Pork Council, which complained that its advertising was misleading.

In a provocative ad in response, La Vie teasingly said, “Thanks for the compliment,” adding: “We think your pork lardons are indistinguishable from our veggie lardons. Would you mind changing your recipe?” 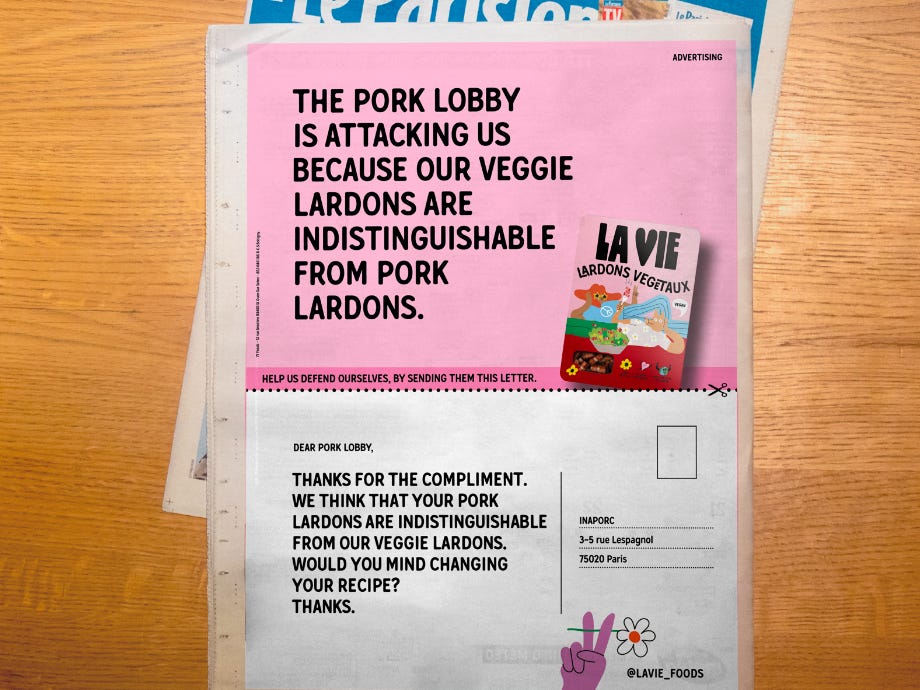 It was a typical move from 35-year-old Schweitzer, who sees himself as a crusader against meat consumption, with humor as a key weapon.

“I don’t see myself as a militant but as an activist, which is slightly different,” he said, explaining that he tried to call for change to the food system “in a quirky and positive way.”

Adding the “plant-based” qualifier to a name should be enough to make it clear that a product isn’t meat, Schweitzer argued. When consumers look at his product, they intuitively call it plant-based bacon, he added.

“The fact that it’s only economic interest,” he said, that might prevent his company from referring to its products in the most explicit way, “is just not right.”

It tends to argue that plant-based meat alternatives shouldn’t be allowed to use meaty terms at all because, put simply, they aren’t meat. They don’t match it in terms of taste, texture, or nutrition, people in the meat and agriculture industries told Insider.

It’s confusing and misleading to customers, they said, especially as meat alternatives are increasingly stocked next to animal meat in grocery stores.

Meat bodies want startups to come up with new terms for plant-based food that imitates meat. “It is a matter of common sense and consistency,” José Manuel Alvarez, a representative of Carne y Salud, a group representing Spanish meat organizations.

Nutrition is a concern too. Some plant-based products have been criticized for being highly processed.

Through that lens, Menne accused his plant-based competitors of hiding behind meaty names that obscure how they’re made. “By using that, you manage to avoid actually telling the consumer what is really in your product,” he said.

A meat-free burger might be high in protein, but “you don’t have the same amino acids, the same vitamins, zinc, and phosphorus and so on,” he added.

The battle over meaty names comes at a precarious time for meat-alternative companies.

Despite the boom in investment, meat alternatives are seeing disappointing sales growth and are feeling the pressure of market volatility and inflation, which the PitchBook analyst Alex Frederick said was leading consumers “to trade down” to cheaper proteins like animal meat.

Volume sales of meat alternatives in the US are down 12.1% from last year, according to IRI data as of November 6. Europe-wide data isn’t readily available.

Bans on meat-based names could slow sales further, weakening the case for more investment — investment that is essential to keep developing plant-based products that might rival meat in terms of taste, texture and nutritional value.

Farneti of Five Seasons Ventures told Insider that naming restrictions would be a blow to the already difficult job of running these startups. “Founders of startups are swimming in deep water, right?” he said. “Changing these rules makes them swim in mud.”

‘We don’t want to destroy our everyday culture’

Heura’s products include soy-based chicken and chorizo substitutes as well as meatballs made with pea protein. It has been sued for using the word “carne” — Spanish for meat — in advertisements.

Añaños, the Heura cofounder, accepts that the legal battles come with the territory. “If we were liked by everyone, we would not be transformative,” he said, adding: “These cases will happen because we are shaking up a whole industry, a big part of the economy.” 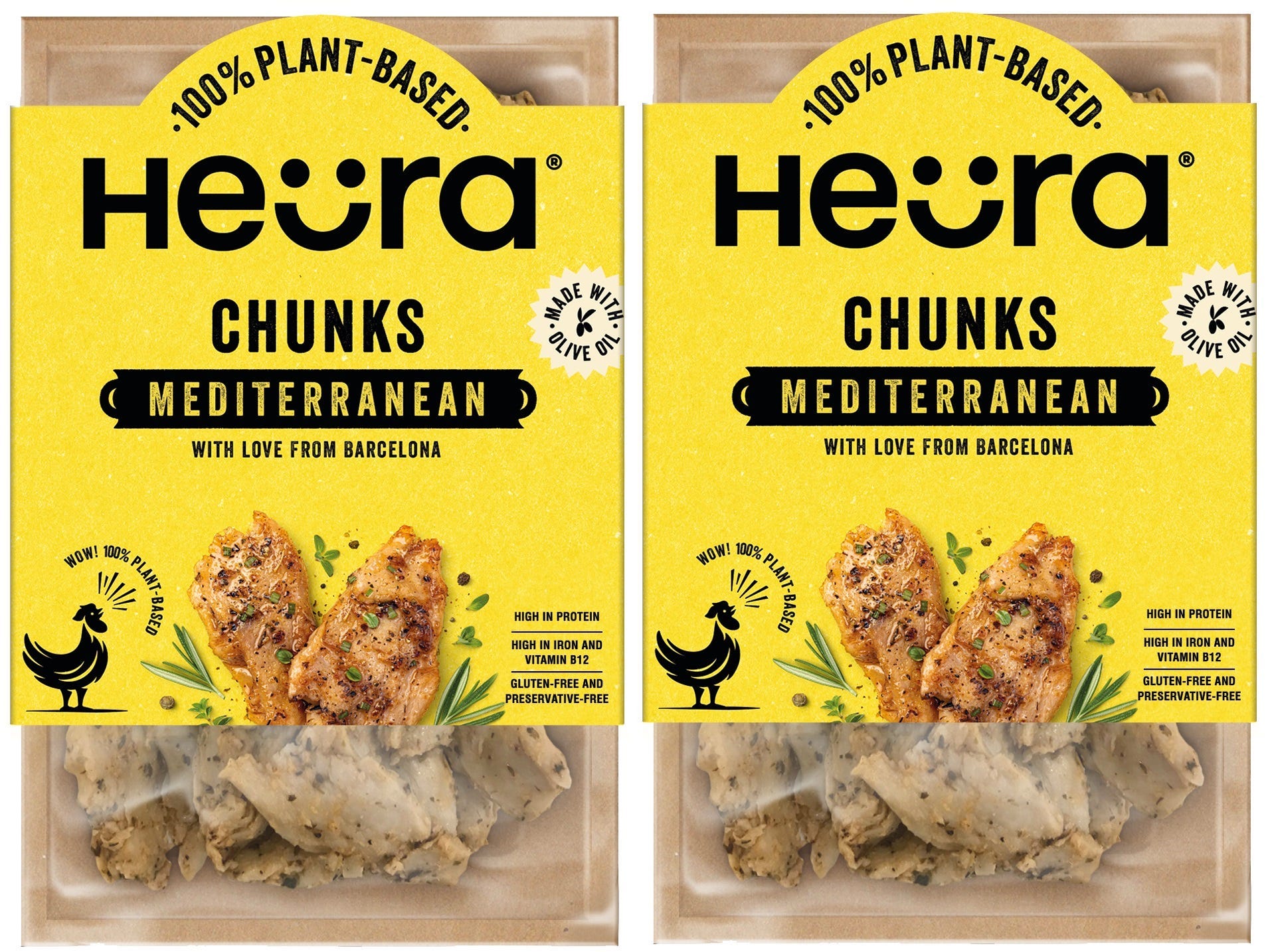 But he thinks the idea that startups like his are threatening all the things people enjoy about meat is a misunderstanding. “We don’t want to destroy our everyday culture,” he said. “I love barbecues with my friends. I love my grandma’s Christmas dinners. I love everything that is connected to meat, but I hate the consequences of it.”

He says the state has a role to play in helping meat producers transition toward a “plant-based age,” such as by helping farmers swap meat rearing for growing legumes and beans.

Despite the animosity, he feels meat producers and plant-based companies will ultimately have to work together: “The climate crisis and the animal crisis is also a challenge of humanity, and either we go together or we will fail — there is no other answer.”

“It is a shame,” Toft Bech said. “I would prefer that we could just get some support, maybe a bit of a regulatory environment that’s more supportive of the new rather than just the old status quo.” 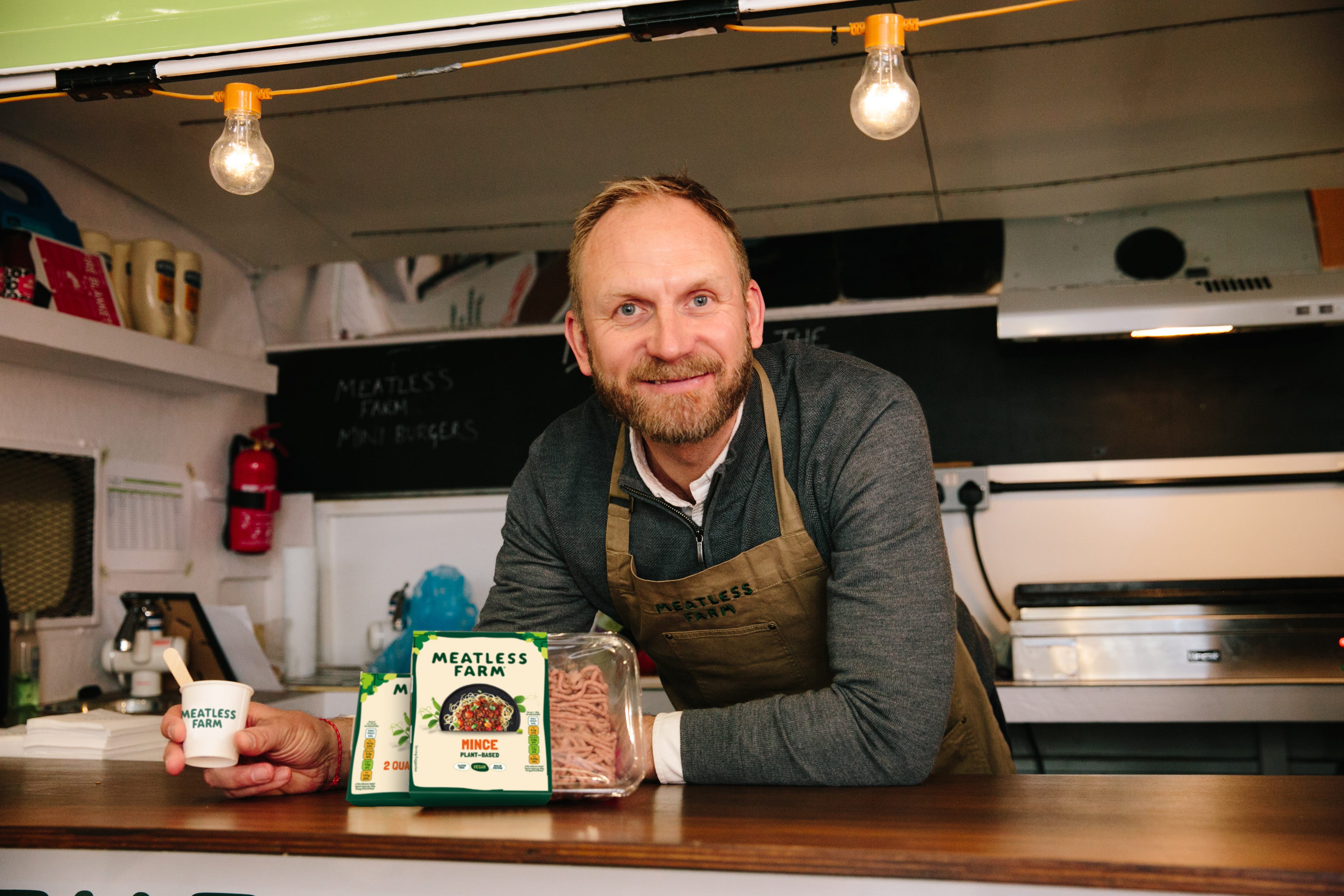 He can imagine a future in which animal-based meat dominates the luxury market and plant-based alternatives replace cheaper, everyday meats. He wants Meatless Farm’s products to replace middle-market cuts that are mass-produced in industrial farms — not quality, hand-reared meat.

Despite the cost and time, startups told Insider the court battles were worth it. “We are fully committed to our vision, so we don’t mind the backlash,” Schweitzer said.

Most companies like his have been launched recently and, unlike the animal-meat industry, don’t have millions of lifelong customers or a long cultural history to protect.

All they have to defend is their products — and their names. “We have nothing to lose,” Schweitzer said.