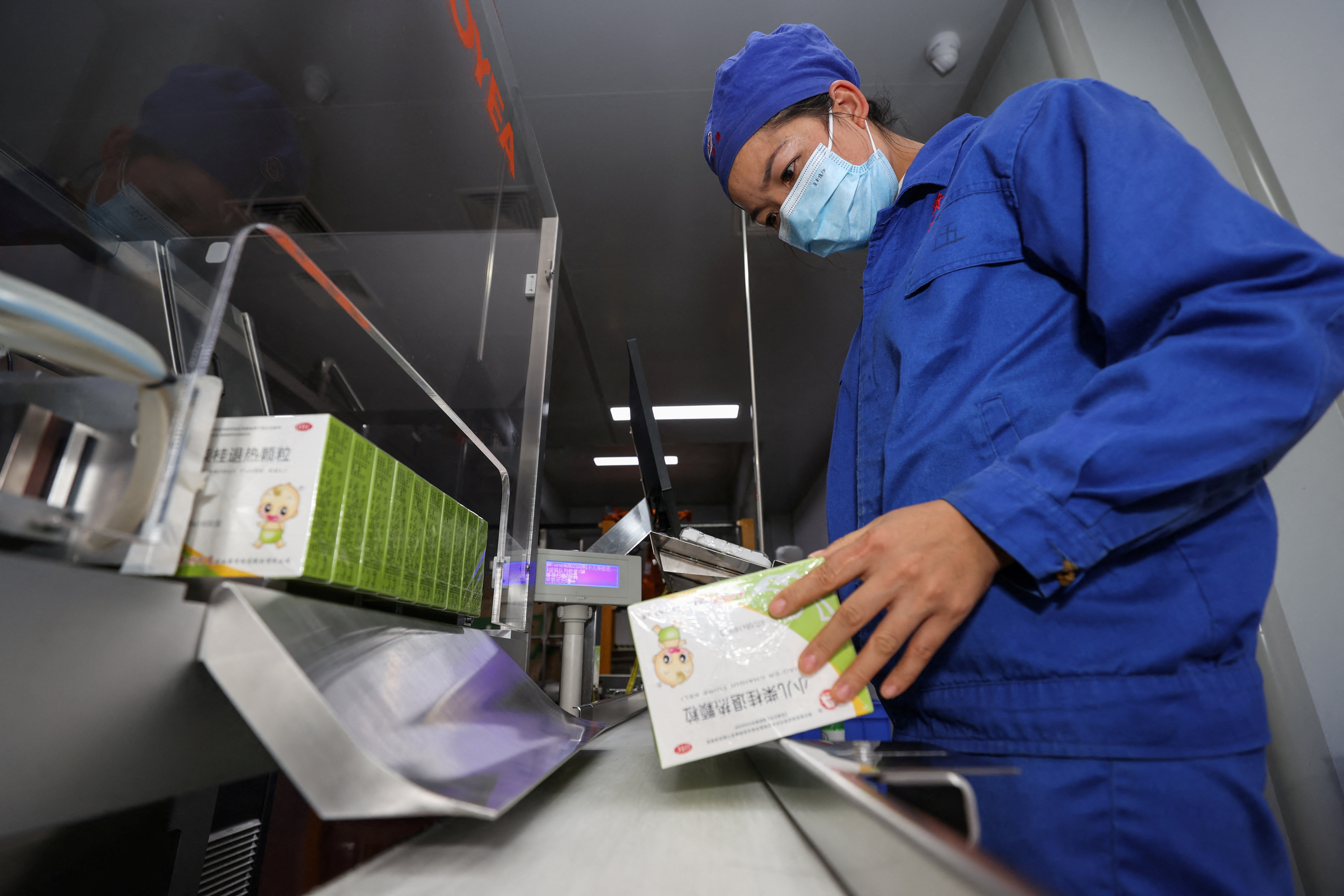 An employee works at the production line of a fever medicine at a Guizhou Bailing plant amid the coronavirus disease (COVID-19) outbreak, in Anshun, Guizhou province, December 24, 2022. cnsphoto via REUTERS

In more than three decades of emergency medicine, Beijing-based doctor Howard Bernstein said, he has never seen anything like this.

Patients are arriving at his hospital in ever-increasing numbers; almost all are elderly and many are very unwell with COVID and pneumonia symptoms, he said.

Bernstein’s account reflects similar testimony from medical staff across China who are scrambling to cope after China’s abrupt U-turn on its previously strict COVID policies this month was followed by a nationwide wave of infections.

It is by far the country’s biggest outbreak since the pandemic began in the central city of Wuhan three years ago. Beijing government hospitals and crematoriums also have been struggling this month amid heavy demand.

“The hospital is just overwhelmed from top to bottom,” Bernstein told Reuters at the end of a “stressful” shift at the privately owned Beijing United Family Hospital in the east of the capital.

“The ICU is full,” as are the emergency department, the fever clinic and other wards, he said.

“A lot of them got admitted to the hospital. They’re not getting better in a day or two, so there’s no flow, and therefore people keep coming to the ER, but they can’t go upstairs into hospital rooms,” he said. “They’re stuck in the ER for days.”

In the past month, Bernstein went from never having treated a COVID patient to seeing dozens a day.

“The biggest challenge, honestly, is I think we were just unprepared for this,” he said.

Sonia Jutard-Bourreau, 48, chief medical officer at the private Raffles Hospital in Beijing, said patient numbers are five to six times their normal levels, and patients’ average age has shot up by about 40 years to over 70 in the space of a week.

“It’s always the same profile,” she said. “That is most of the patients have not been vaccinated.”

The patients and their relatives visit Raffles because local hospitals are “overwhelmed”, she said, and because they wish to buy Paxlovid, the Pfizer-made COVID treatment, which many places, including Raffles, are running low on.

Jutard-Bourreau, who like Bernstein has been working in China for around a decade, fears that the worst of this wave in Beijing has not arrived yet.

Elsewhere in China, medical staff told Reuters that resources are already stretched to the breaking point in some cases, as COVID and sickness levels amongst staff have been particularly high.

One nurse based in the western city of Xian said 45 of 51 nurses in her department and all staff in the emergency department have caught the virus in recent weeks.

“There are so many positive cases among my colleagues,” said the 22-year-old nurse, surnamed Wang. “Almost all the doctors are down with it.”

Wang and nurses at other hospitals said they had been told to report for duty even if they test positive and have a mild fever.

Jiang, a 29-year-old nurse on a psychiatric ward at a hospital in Hubei province, said staff attendance has been down more than 50 percent on her ward, which has stopped accepting new patients. She said she is working shifts of more than 16 hours with insufficient support.

“I worry that if the patient appears to be agitated, you have to restrain them, but you cannot easily do it alone,” she said. “It’s not a great situation to be in.”

The doctors who spoke to Reuters said they were most worried about the elderly, tens of thousands of whom may die, according to estimates from experts.

More than 5,000 people are probably dying each day from COVID-19 in China, Britain-based health data firm Airfinity estimated, offering a dramatic contrast to official data from Beijing on the country’s current outbreak.

The National Health Commission did not immediately respond to a Reuters request for comment on the concerns raised by medical staff in this article.

China reported no COVID deaths on the mainland for the six days through Sunday, the Chinese Center for Disease Control and Prevention said on Sunday, even as crematories faced surging demand.

China has narrowed its definition for classifying deaths as COVID-related, counting only those involving COVID-caused pneumonia or respiratory failure, raising eyebrows among world health experts.