Sometimes, in the winter, you just want a little hygge, that sense of cozy well-being signified by balsam-scented candles, puffy coverlets, and lumpy sock knitting. For your other, darker moods, there’s Scott Cooper’s The Pale Blue Eye, a chilly murder mystery set at West Point in 1830 in which a taciturn local detective, Christian Bale’s Augustus Landor, enlists the help of a young cadet in solving a rash of homicides at the school. The cadet, played by English actor Harry Melling, is a hunched, pale lad whose sentences unspool in loquacious curlicues. He seems out of place at a military academy, and pretty much out of place anywhere practicality and speed might be valued. But he already knows he’s a poet, and though he hasn’t yet made a name for himself, the world will eventually recognize him as Edgar Allan Poe.

Like a fire made with mildly damp kindling, The Pale Blue Eye—adapted from Louis Bayard’s 2003 novel of the same name—takes a while to get going. Maybe, in truth, it never really does get going. But the story’s stately pace is part of the attraction, and perhaps key to its pleasurably somber tone. Landor lives alone in a book-filled cottage somewhere along the Hudson River; later we’ll learn that he’s nursing a secret sorrow, the loss of a daughter. He’s drawn out of his lair, reluctantly, when a West Point cadet’s body is found hanging from a tree. The death could be a suicide—except the young man’s heart has been excised from his body with bleak precision, a grisly detail the school’s in-house physician (and, when necessary, coroner), Toby Jones’ Dr. Marquis, reveals with a flourish. Landor, knowing he needs to infiltrate the students’ clannish ranks, befriends the skittish but observant youngster Poe to help suss out the killer. The investigation leads them down a path of black magic, and of romance: our youthful, morbid poet goes all knock-kneed for Dr. Marquis’ daughter, the gorgeously consumptive Lea (Lucy Boynton). Bundled in fetching velvet tones of teal and chocolate, she coughs daintily as she accompanies Poe on a pleasantly brooding cemetery walk, where they speak of death and other disquieting things. No wonder he’s a goner. 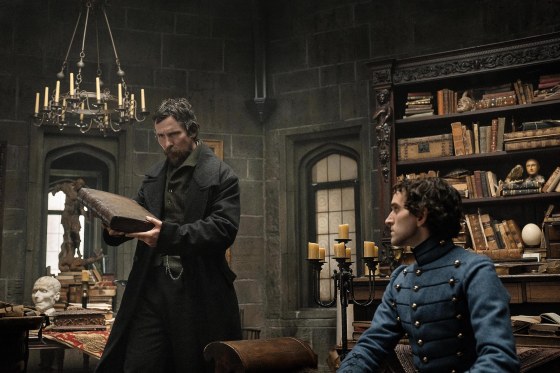 Both Landor and Poe are outsiders within the rigid confines of West Point. Landor is there to do a job, though he has little but contempt for the two puffed-up officers in charge of the joint, Simon McBurney’s Captain Hitchcock and Timothy Spall’s Superintendent Thayer, who just want to get the whole thing wrapped up quickly to avoid scandal. And Poe, born in Boston but, thanks to his Virginia upbringing, speaking with a soft, Southern lilt, is far too courtly to fit in with his coarse classmates. (In a scene where he infiltrates a secret student lair, rife with drinking and card playing, he recites a dirty limerick at the urging of one of his roguish compatriots, the words as foreign on his tongue as a Martian language.) Though Landor and Poe are united in their efforts to smoke out the murderer, there’s mistrust between them too. Landor clearly finds Poe just plain odd, though he sees immediately how his sensitive young helper is a cut above the pedigreed ruffians who flock to this esteemed school. And Poe is touchingly eager to help, though he picks up on Landor’s secretiveness. These two circle each other warily at times, though both realize they’re the smartest oddballs in the room. Everyone else at West Point is just a big, macho square. 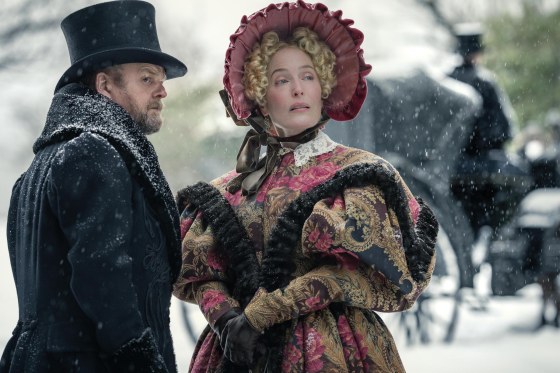 Scott—Garfield NetflixToby Jones as Dr. Marquis and Gillian Anderson as Julia in The Pale Blue Eye

Set in a world of pale, misty forests and cottages that glow from within—less in a welcoming way than a sinister one—The Pale Blue Eye, which comes to Netflix on Jan. 6, is a whodunit reinvented as an early-mid-19th -century mood board. Shot by Masanobu Takayanagi, with production design by Stefania Cella, it’s got candlelit style to burn. Cooper—whose movies include the 2009 musician-on-the-skids romance Crazy Heart and 2017’s Wild West drama Hostiles—seems to have taken great pleasure in building the story’s shifting atmospherics layer by layer, like late-winter strata of snow. Even Bale’s face, gaunt and shaggily bearded, looks like a daguerreotype, the sort of thing you might come across at a flea market, tucked away in a velvet case of secrets. And Melling, with his artificially high forehead and ball-bearing stare, is a weirdly convincing Poe: this is a face that doesn’t yet know it needs a mustache, badly.

The movie also features a large cast of frostily amusing supporting players, though some, like the always charming Charlotte Gainsbourg—as a barmaid who sometimes shares Landor’s bed—could have a little more to do. Robert Duvall shows up as a crotchety local expert on the occult. (He goes by the delightful if somewhat incongruous name Jean Pepe.) As Dr. Marquis, a model of propriety who just may be hiding a sinister streak, Jones gets to wear an assortment of richly patterned silk waistcoats befitting a physician’s status. Best of all is X-Files legend Gillian Anderson, who plays his gelid, appraising wife, a doyenne of distinction who favors enormous, quivering bonnets and seriously inflated leg-o’-mutton sleeves. When she quizzes Landor about his own wife, not long deceased, her voice streams out in a low, guttural trill, like an animal on the hunt. The whole thing is about as cozy as a blanket of thorns—but then, you don’t go to Poe for a good cuddle, and The Pale Blue Eye gets that. This is one foreboding snow globe of a movie.