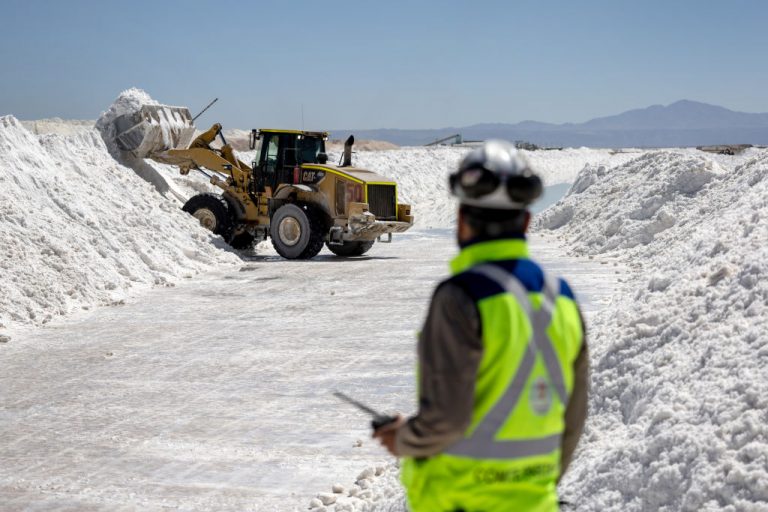 A Canadian company hopes to use Biden administration loans to open the largest lithium mine in North America. But first, it must convince government officials and prospective partners that it’s adequately decoupled from its top shareholder: a Chinese enterprise led by known Chinese Communist Party members.

Lithium Americas—whose largest shareholder is Chinese mineral giant Ganfeng Lithium—earlier this month announced its intention to split the company into two separate entities, a move that comes as it works to obtain a Biden administration loan to fund “the majority” of its lithium mining project in northern Nevada. The company told the Washington Free Beacon it expects the separation to ease “geopolitical” concerns from government officials and investors over its relationship with Beijing-tied Ganfeng, given that the split would decouple Lithium Americas’ Nevada mine from its more controversial mining projects in South America, which Ganfeng holds direct ownership stakes in. But leading China hawks in the Republican Party are not satisfied with the separation, prompting them to sound the alarm over Lithium Americas’ potential to receive federal funding.

That dissatisfaction stems from the fact that under the proposed split, shareholders will receive stakes in both Lithium Americas’ North American and South American entities proportional to their current holdings. Because Ganfeng is the only entity that owns more than 10 percent of Lithium Americas’ shares, it will remain the largest shareholder of both companies following the split, a Lithium Americas official confirmed to the Free Beacon. As a result, Ganfeng will still have a sizable financial interest in Lithium Americas’ mine unless it decides to divest—financial interest that has former secretary of state Mike Pompeo calling the split a “half measure” that is “nowhere near enough to guarantee that the CCP will not have any amount of control over a key source of America’s lithium supply.”

“Until we know that no CCP-controlled shareholder is involved in this project, the Treasury Department should not allow it to move forward,” Pompeo told the Free Beacon. Rep. Mike Waltz (R., Fla.) and Sen. Tom Cotton (R., Ark.) echoed Pompeo’s sentiment, with Waltz calling Lithium Americas’ separation plan a “shell game” and Cotton urging President Joe Biden’s Energy Department to “do its due diligence and not fall prey to any trickery orchestrated by Ganfeng.”

It’s unclear whether Lithium Americas’ corporate split will convince the Biden administration, which did not return a request for comment, to award the company a loan. A Lithium Americas official told the Free Beacon the company expects to receive a final decision on its loan application in the near future, meaning it could receive federal funding before it finalizes its separation plan next year. “It definitely won’t be far,” the official said of the Biden administration’s loan decision. “We have gone through the entire Department of Energy process.”

Should Lithium Americas obtain a Biden administration loan, the company still may not be in the clear when it comes to federal oversight. Waltz told the Free Beacon that a Republican-controlled House could investigate loan recipients as they work to avoid a repeat of the Obama administration’s failed green energy loans, which went to a number of startups—including an electric battery maker—that went on to declare bankruptcy.

“There will absolutely be efforts—they’re already underway. Now that we’ll have subpoena power, we’ll shine a big spotlight on it,” Waltz said of House Republicans’ plans to conduct energy-related investigations. “I think the next two years we’ll be investigating, getting to the bottom, having hearings, putting on a spotlight. And then we’ve got to win the Congress and the White House to actually start rolling some of this stuff back.”

Lithium Americas plans to break ground on its mining site in northwestern Nevada, which is home to tens of thousands of tons of lithium, next year. The project is a clear priority for the Biden administration as it works to promote electric vehicles, which require large amounts of lithium for their batteries. Those batteries, however, are almost impossible to source from the United States—China controls roughly 60 percent of the world’s lithium resources and dominates the electric battery supply chain in general.

In an attempt to undermine that dominance, the White House in December 2021 announced $17 billion in federal loans to “support the domestic battery supply chain,” a move Democratic Nevada senator Catherine Cortez Masto said would “benefit national security by leveling the playing field with China.” Lithium Americas applied for such a loan in April, but the company’s deep ties to the very same nation the White House hopes the loan program will deter—China—have plagued its plot to obtain federal funds. Beyond its status as Lithium Americas’ largest shareholder, Ganfeng has a tight relationship with China’s state-owned banks, which helped the company fund mining projects in South America and Australia.

Ganfeng’s executives also have extensive ties to Beijing, the Free Beacon reported in September. Ganfeng president Li Liangbin, for example, serves on a number of Chinese Communist Party-aligned committees and advisory boards, and executive vice president Wang Xiaoshen—who serves on Lithium Americas’ board—got his start in the lithium sector through Chinese state-owned enterprises. Lithium Americas acknowledged in an interview with the Free Beacon that Xiaoshen’s role on the company’s board prompted questions from investors following media reports.

“As the government continues to invest in battery supply chain programs, it is critical that DOE ensure taxpayer funding does not go to corporations with CCP ties and does not increase U.S. mineral dependence on China,” Cotton wrote. “Ganfeng and any other Chinese entities with CCP ties should divest their stakes in Lithium Americas before the company is offered this loan.”

The post This Foreign Company Wants To Mine Massive Amounts of Lithium in Nevada. First, It Must Overcome Its China Problem. appeared first on Washington Free Beacon.

Home » Audio Sources - Full Text Articles » This Foreign Company Wants To Mine Massive Amounts of Lithium in Nevada. First, It Must Overcome Its China Problem.
a