Since I never expected Donald Trump to be president, I shuddered at the prospect of participating in a symposium on the theme, “Is this the end of Trump?” How often does anyone want to risk being wrong?

But as the investment funds always warn, past performance is no guarantee of future results. After years of confounding his detractors by surviving, he has now reached the end of the line. It may take a while. His poll ratings among Republicans will not come down all of a sudden. Nonetheless, the man who labeled Jeb Bush the “low energy” candidate is perilously close to deserving the “low energy” moniker himself.

Yes, the worlds of politics and punditry have become so accustomed to Trump’s ability to come back from scandals that would destroy the careers of everyone else that they now see Trump as endowed with miraculous superpowers. His greatest superpower has been the reluctance of most Republicans to move against him no matter what he did or said. To a large degree, that still holds. The GOP’s politicians remain deeply afraid of Trump’s loyalists and, as I wrote recently in the Washington Post, Trump’s weakness is his strength: The more he drives non-extremists out of the Republican Party, the more his supporters will dominate Republican primaries.

So far there have been far fewer protests among Republicans against Trump’s dinner party with Ye (formerly known as Kanye West) and white nationalist and anti-Semite Nick Fuentes than there should have been. There was a bit more pushback against Trump’s statement that the Constitution should be set aside so he can become president, but—Good Lord!—that should have been the end of the line right there. It wasn’t. Yet.

It would be lovely to think that decent, reasonable Republicans would finally turn on Trump for principled reasons, especially after his comments on upending the Constitution. This was the path already taken by Reps. Liz Cheney and Adam Kinzinger especially, and by the other eight House Republicans who voted for Trump’s impeachment the second time in 2021. It was also the choice of the seven Senate Republicans who voted to convict him.

But notice how small those numbers are. And only two of the 10 GOP House members who voted to impeach him will be members of the 118th Congress. Four, including Cheney, lost primaries, and four, including Kinzinger, decided to leave Congress.

No, Trump will only be pushed aside when his political cost to his party becomes intolerable. That is precisely what is in the process of happening. Nothing has harmed Trump more than the obvious damage he did to Republicans in the 2022 elections, culminating this month in the defeat of his handpicked candidate Hershel Walker by Sen. Rafael Warnock in the Georgia runoff.

Republicans might well have taken control of the Senate but for the weakness of Trumpist candidates not only in Georgia but also in Arizona, Pennsylvania, and New Hampshire. Trumpism was shellacked at the state level. His election deniers lost all the swing state secretary of state races. The landslides of Gov. Gretchen Whitmer in Michigan and Gov.-elect Josh Shapiro were a tribute not only to their political skills but also to the backlash against the extremism Trump promotes.

In the meantime, standing against Trump has proved helpful to key GOP figures. Think especially of Gov. Brian Kemp and Secretary of State Brad Raffensperger in Georgia. Both held on to right-wing Republicans but performed well in the Atlanta suburbs and ran far ahead of Walker. Republicans elsewhere noticed the potential advantages of life after Trump.

Trump’s political toxicity is also leading traditional centers of conservative power to move away from him. This is nowhere more obvious than in the Murdoch-owned press: the Wall Street Journal editorial page and the New York Post. Fox News is a more complicated story, but there have been moments of Trump agnosticism and even skepticism since the election that would have been unthinkable even a year ago.

The possibility of a Trump indictment, which seems to grow stronger by the day, is not helping him, either. It could prove to be the moment of truth. No doubt lots of Republicans, especially in the House, would rush to his defense. But others might view it as the occasion to say definitively that it was time to move on.

Which is the final element of the case for Trump’s fading from the scene: He clearly senses the possibility that Republicans will slowly abandon him. His frantic efforts to gain attention—his call for ignoring the Constitution is Exhibit A—reflect his fear that he might become the one thing he never wants to be: a loser. And the more panicky he looks, the more likely that outcome becomes.

Even when they winced, Republican leaders tolerated most of Trump’s sins. But there is one they will not forgive him for: booting away electoral victories. 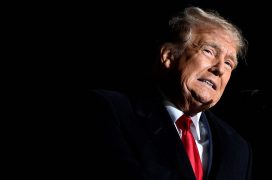 Home » Audio Sources - Full Text Articles » Trump said we’d get tired of winning. He’ll fall because the GOP is tired of losing.
a