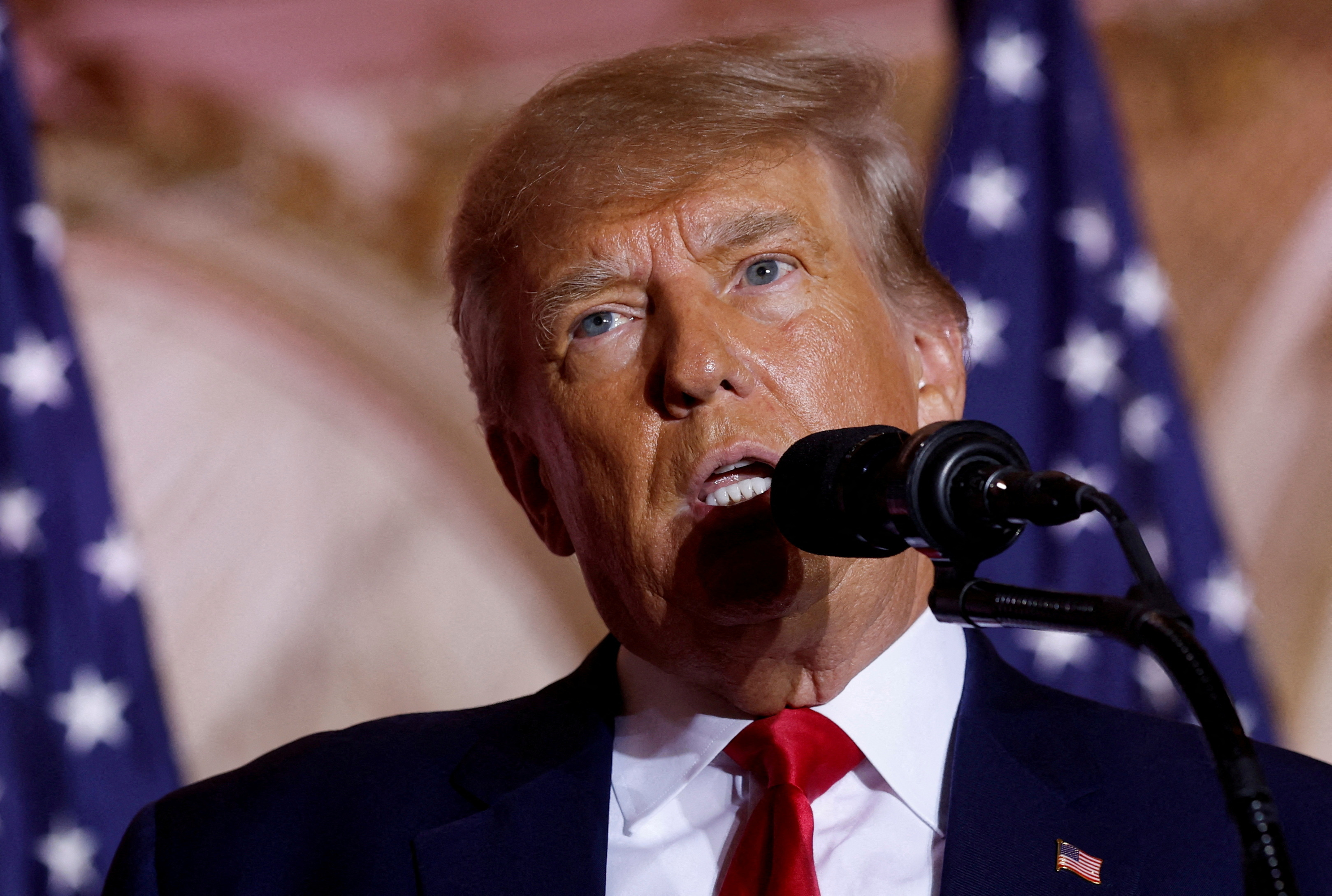 Former U.S. President Donald Trump announces that he will once again run for U.S. president in the 2024 U.S. presidential election during an event at his Mar-a-Lago estate in Palm Beach, Florida, U.S. November 15, 2022. REUTERS/Jonathan Ernst

The U.S. House of Representatives committee probing the Jan. 6, 2021, assault on the Capitol by Donald Trump supporters moves to wrap up its work this week with what could be as many as three criminal referrals against the former president.

The Democratic-led panel has spent 18 months probing the unprecedented attempt to prevent the peaceful transfer of power by thousands of backers of the Republican president, inspired by Trump’s false claims that his 2020 election loss to Democratic President Joe Biden was the result of widespread fraud.

Possible criminal referrals to the Justice Department could be on charges including obstruction of an official proceeding of Congress, conspiracy to defraud the United States, and insurrection, according to multiple media reports.

The committee is scheduled to meet Monday to consider referrals and vote on its final report, which it expects to release in full on Wednesday. Panel members have declined to provide specifics ahead of the meeting.

However, the impact of any referrals is not clear because the Justice Department would have to decide whether to pursue charges.

The select committee’s work is one of a series of investigations into the riot.

A jury has already found members of the right-wing Oath Keepers militia guilty of sedition for their role in the attack and a special counsel, Jack Smith, is leading probes into Trump’s efforts to overturn his loss and his removal of classified documents from the White House.

With Republicans due to take control of the House of Representatives next month, the Jan. 6 committee is expected to be disbanded, even as Trump seeks the Republican nomination to run for the White House again in 2024.

The committee’s best-known work has been a series of televised hearings and meetings from July 2021 to October 2022.

Those featured testimony from close associates of Trump, including his eldest daughter, Ivanka — who said she did not believe her father’s false stolen-election claims — members of his administration and dramatic videos of the attack, when thousands of rioters stormed the Capitol, sending lawmakers and then-Vice President Mike Pence running for their lives.

The committee subpoenaed all five after they failed to comply with requests to testify, although some did so after being subpoenaed.

It subpoenaed Trump in October, asking him to testify and provide documents, but he filed suit to block the action.

Five people including a police officer died during or shortly after the riot and more than 140 police officers were injured. The Capitol suffered millions of dollars in damage.

In the almost two years since leaving office, Trump has kept up his false claims of election fraud, although dozens of courts, state reviews and members of his own administration, including former Attorney General Bill Barr, have dismissed his claims as unfounded.

The committee’s hearings included testimony from multiple Trump associates that Trump knew some participants in the riot arrived armed and that he wanted to join the mob as it marched toward the Capitol, after giving a fiery speech.

Trump has dismissed the many investigations he faces as politically motivated as he seeks to return to power.

But Republicans’ weaker-than-expected performance in midterm elections last month, including losses by multiple candidates who embraced his election falsehoods, showed a significant number of voters reject his claims.

Some prominent Republicans have urged the party to move on from Trump’s focus on 2020 as they select a nominee for 2024. A Reuters/Ipsos poll in October found that two in five Republicans believed Trump was at least partly responsible for the attack.

It would be up to the Justice Department itself to decide whether to pursue any prosecutions recommended by the committee.

Federal prosecutors have already gone after two Trump allies that the committee recommended charging. In July, a jury found former Trump adviser Steve Bannon guilty of contempt of Congress for refusing to testify, and former White House adviser Peter Navarro is due to stand trial next month on the same charge.

Attorney General Merrick Garland last month named Smith, a war crimes prosecutor, to serve as special counsel leading the Trump probes. That action was intended to isolate the investigations from any appearance of political interference as Trump and Biden prepare for a possible election rematch.

Four of the committee’s members, including both Republicans, leave Congress early next year. Democrat Stephanie Murphy and Republican Adam Kinzinger are retiring and the other two, the panel’s Republican vice chairperson, Liz Cheney, and Democratic member Elaine Luria, lost their elections.