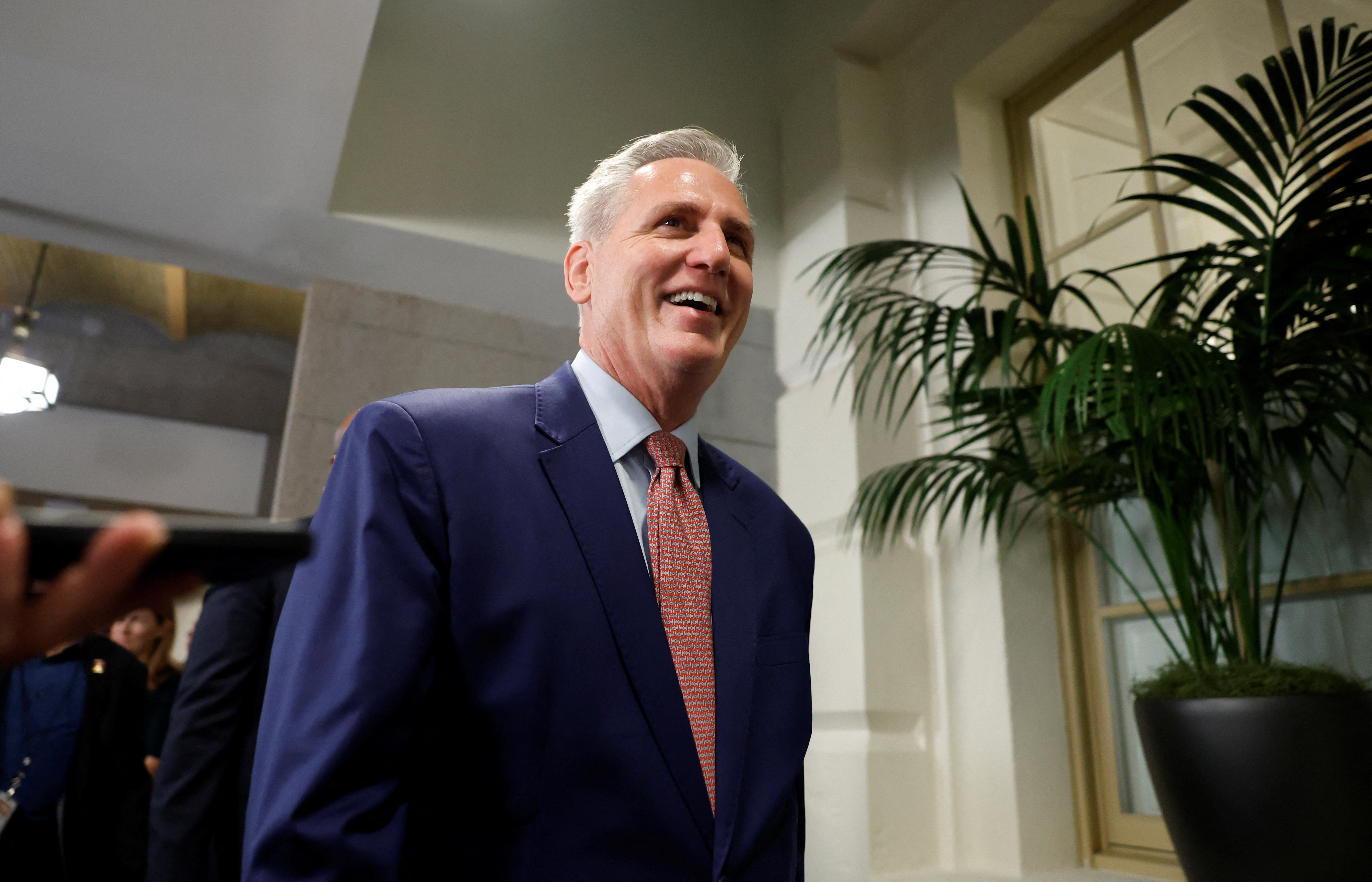 U.S. House Republican leader Kevin McCarthy (R-CA) talks to reporters as he arrives on the first day of the new Congress at the U.S. Capitol in Washington, U.S., January 3, 2023. REUTERS/Evelyn Hockstein

Republican Kevin McCarthy’s bruising quest to become speaker of the U.S. House of Representatives will enter a second day on Wednesday, with the party’s new majority fractured by a revolt among hardline conservatives who oppose his candidacy.

McCarthy weathered three failed votes for speaker on Tuesday as about 20 hardline conservatives blocked his path to the top congressional job and plunged the House into turmoil. It was the first time in 100 years that the House has not elected a speaker on its first day.

A second day of voting was expected to get under way on Wednesday, when the House meets at noon (1700 GMT).

McCarthy has refused to give up against the hardliners, who make up less than one-tenth of the House Republican conference. Late on Tuesday, he vowed to stay in the race and said he continued to have the backing of former President Donald Trump, who remains a powerful figure in their party.

But the standoff has raised fears among party members of a longer-term rift that could hobble their ability to move forward in unison on economic, energy, spending and immigration priorities in the run-up to the 2024 presidential election.

The slim 222-212 Republican majority gives greater clout to a small group of hard-right lawmakers, who want rule changes that would give them greater control over the speaker and more influence over the party’s approach to spending and the debt. Supporters of McCarthy, who has served as House Republican leader since 2019, accuse some hardliners of conducting a “Never Kevin” campaign aimed solely at stopping him.

McCarthy’s opponents selected conservative Representative Jim Jordan as their candidate, despite the fact that Jordan backs McCarthy and has not put himself forward in the speaker’s race.

“Right now our candidate is Jim Jordan. He is a fighter. He is a leader. He may not want it right now, but George Washington did not want to be president,” Representative Lauren Boebert told Fox News.

Tuesday’s session, which involved about five hours of failed votes, made Republicans a target of ridicule by Democrats. McCarthy drew only 202 votes on the final ballot, before the House adjourned. The last time the House failed to elect a speaker on the first ballot was 1923.

“Republicans have shown their hand and unveiled the clown car caucus with which they expect to govern,” Democratic Representative Raul Grijalva said in a statement.

House Minority Leader Hakeem Jeffries, who bested McCarthy in the three ballots on Tuesday by garnering all 212 Democratic votes, took a more somber view of the day’s chaos.

The conservative rebellion also ratcheted up frustrations among Republicans, who said McCarthy’s opponents were stalling party plans to push forward with its legislative priorities and to investigate Democratic President Joe Biden and his administration.

As McCarthy has publicly made a number of concessions to the hardline flank, Republicans who back McCarthy accuse the hardliners of undermining claims that the party is capable of governing.

“Exasperation is growing among members because they have had a hard time figuring out exactly what the holdouts want,” Republican Representative Dusty Johnson told reporters.

Some Republicans warned that continued obstruction could lead them to work with Democrats to elect a moderate Republican as speaker. But Jeffries told reporters that Republicans had not approached Democrats about supporting a consensus candidate to end the stalemate and that Democrats were not going to solve Republicans’ problem for them.

If elected, McCarthy would succeed Democrat Nancy Pelosi as speaker, making him second in the line of presidential succession after Vice President Kamala Harris.