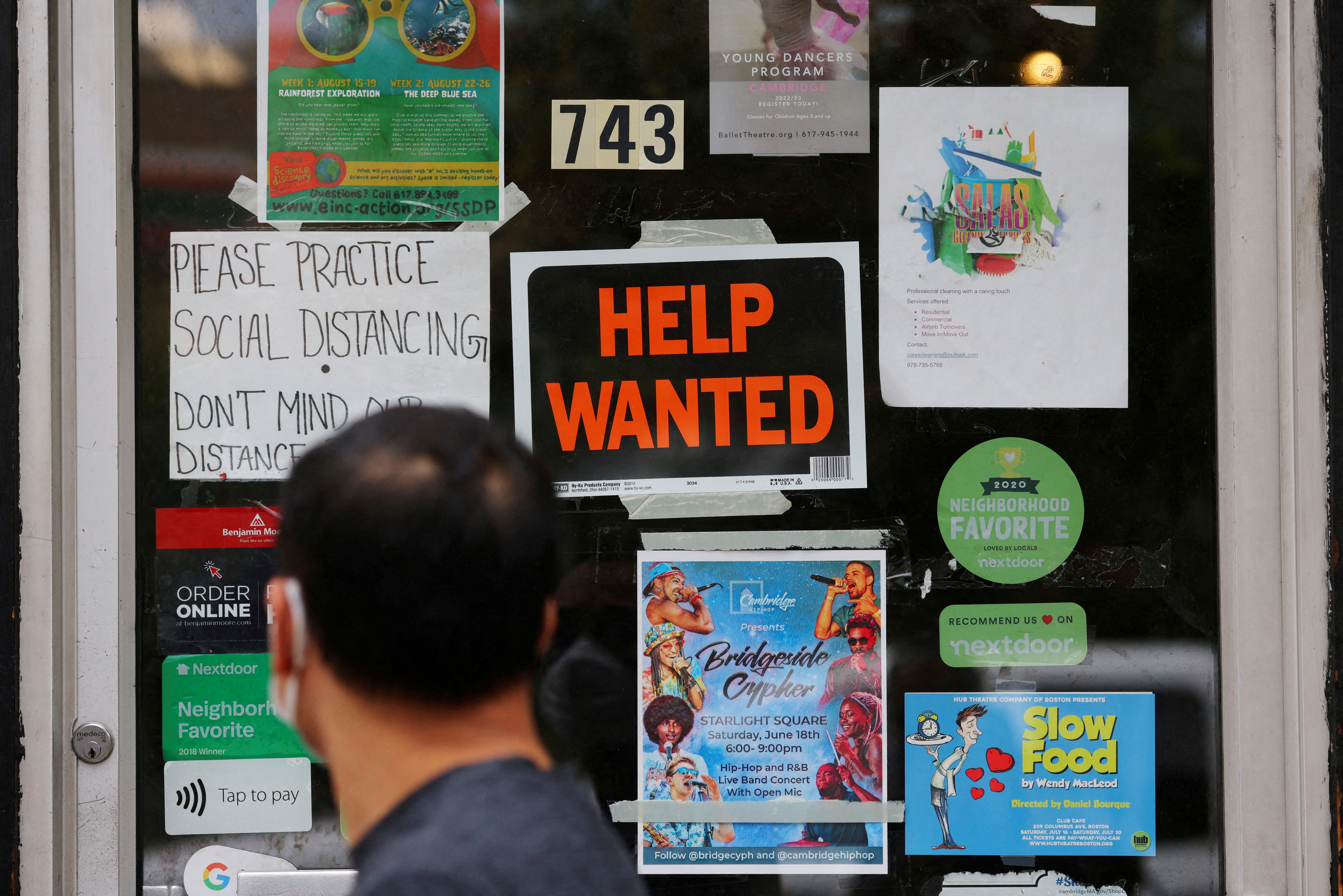 A pedestrian passes a “Help Wanted” sign in the door of a hardware store in Cambridge, Massachusetts, U.S., July 8, 2022. REUTERS/Brian Snyder

The U.S. economy likely maintained a solid pace of job and wage growth in December, but rising borrowing costs as the Federal Reserve fights inflation could slow labor market momentum significantly by mid-year.

The Labor Department’s closely watched employment report on Friday is also expected to show the unemployment rate unchanged at 3.7% last month. The labor market has remained strong since the Fed embarked last March on its fastest interest rate-hiking since the 1980s.

Rate-sensitive industries like housing and finance, as well as technology companies, including Twitter, Amazon (AMZN.O) and Facebook parent Meta (META.O) have slashed jobs, yet airlines, hotels, restaurants and bars are desperate for workers as the leisure and hospitality industries continue to recover from the pandemic.

Labor market resilience has underpinned the economy by sustaining consumer spending, but could prompt the Fed to lift its target interest rate above the 5.1% peak the U.S. central bank projected last month and keep it there for a while.

“All indications are that the labor market remains strong,” said Sung Won Sohn, a finance and economics professor at

Loyola Marymount University in Los Angeles. “Leisure and hospitality employers are not able to get anybody even after wages have been going up. That pattern has and will continue for a while, so that’s where the rubber hits the road.”

The survey of business establishments is likely to show that nonfarm payrolls increased by 200,000 jobs last month after rising 263,000 in November, according to a Reuters poll of economists. That would be the smallest gain in two years.

However, job growth would far exceed the pace needed to keep up with growth in the working-age population, comfortably in the 150,000-300,000 range that economists associate with tight labor markets.

Data from payroll scheduling and tracking company Homebase showed employers held on to workers in December, which suggested a smaller-than-normal drop in not seasonally adjusted (NSA) terms.

“This means that the seasonal factor, which should be adjusting over a plus 200,000 NSA decline, would be adding over a stronger than expected figure,” said TD Securities macro strategist Oscar Munoz. “The seasonal adjustment has added around 430,000 jobs, on average, over the last five Decembers.”

An ongoing strike by 36,000 teachers in California is seen depressing government payrolls. The government will revise the seasonally adjusted data for the household survey, from which the unemployment rate is derived, for the last five years.

Household employment decreased in October and November, leading some economists to speculate that overall job growth was overstated. Some Fed officials have also latched on to the divergence between the two measures.

Yet the household survey tends to be volatile and most economists expect household employment would be revised toward nonfarm payrolls.

Little impact is seen on the unemployment rate from the revision to the household data. Average hourly earnings are expected to have risen by 0.4% after surging 0.6% in November. That would lower the year-on-year increase in wages to 5.0% from 5.1% in November.

Strong wage growth is likely to persist in January as several states raise their minimum wage and most workers across the country get cost of living adjustments. There were 10.458 million job openings at the end of November, which translated to 1.74 jobs for every unemployed person.

But the trend in employment growth could slow significantly by mid-year. The Fed last year raised its policy rate by 425 basis points from near zero to a 4.25%-4.50% range, the highest since late 2007. Last month, it projected at least an additional 75 basis points of hikes in borrowing costs by the end of 2023.

Confidence among chief executive officers is at its lowest level since the Great Recession, according to a recent survey from the Conference Board.

“If they think demand is weakening and revenues are going to slow, they’re probably going to feel pressure to cut costs to maintain profitability,” said James Knightley, chief international economist at ING in New York. “That does suggest that the pace of employment growth is likely to slow quite quickly through this year, and we could in fact, start to see some job losses in the middle of the year.”