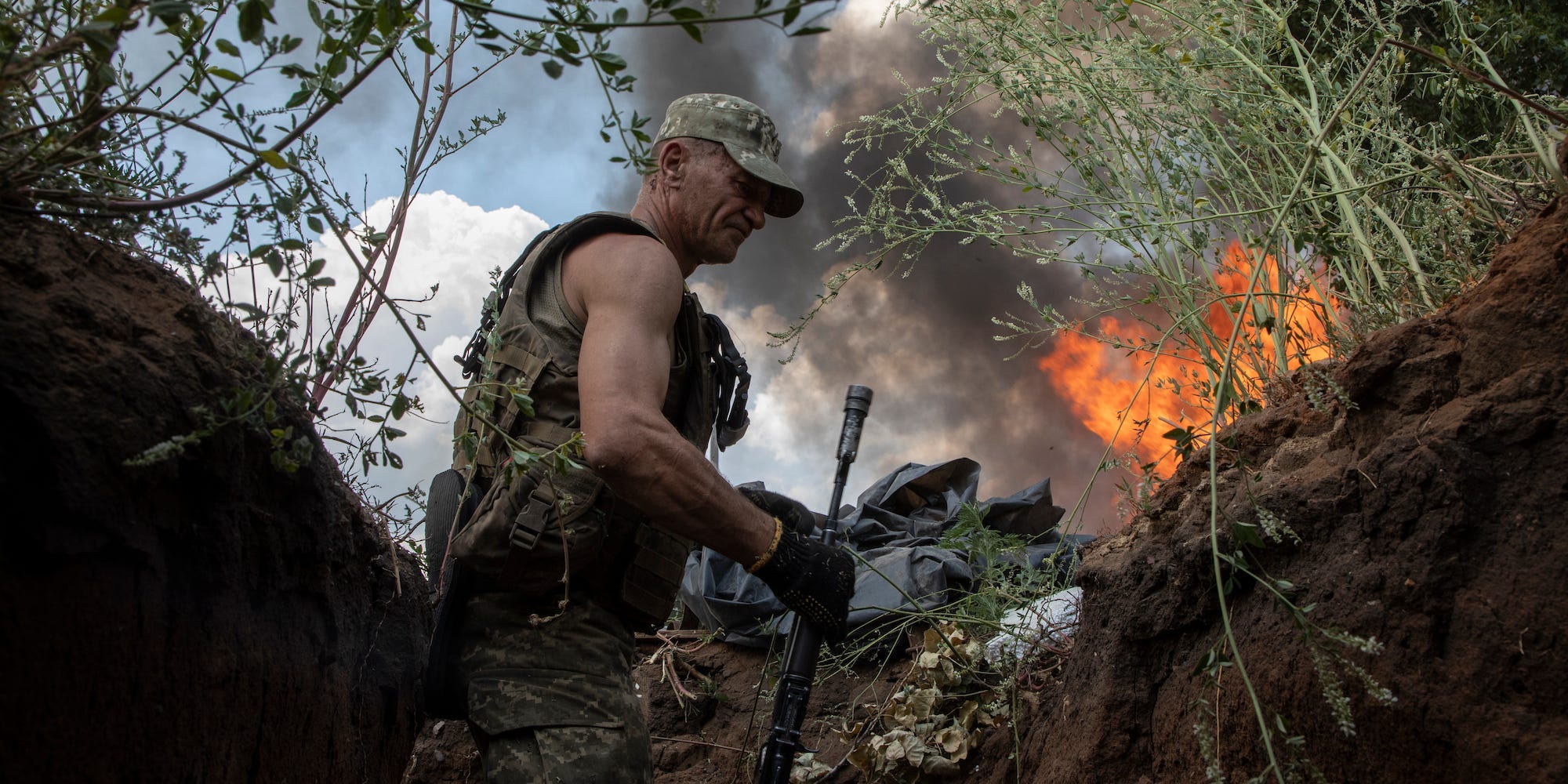 A Ukrainian paratrooper takes shelter in a trench from a BM-21 Grad multiple rocket launcher attack on July 5,2022 in Seversk, Ukraine.

Trench warfare, relentless artillery, gains measured in mere meters, and heavy casualties on both sides. The battlefields of Ukraine resemble those of World War I, but with a new and terrifying reality — the incessant buzzing of drones, harbingers of death and destruction that are constantly watching from above.

The Ukraine war has essentially become “World War I with 21st century ISR [Intelligence, Surveillance and Reconnaissance],” Mark Cancian, a retired US Marine Corps colonel and senior adviser at the Center for Strategic and International Studies, told Insider. 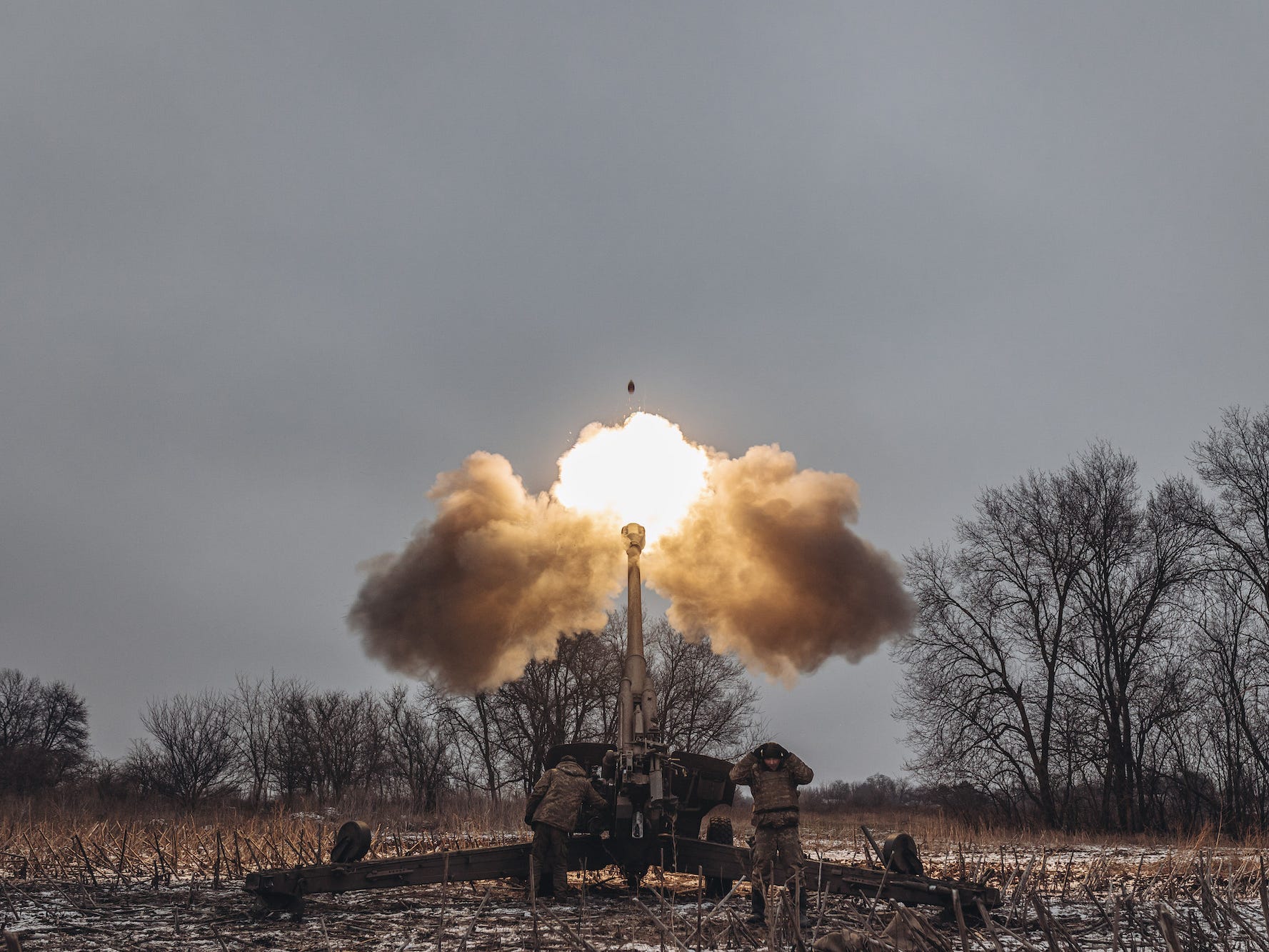 Ukrainian soldiers work in their artillery unit in the direction of Marinka, 15 January 2023. 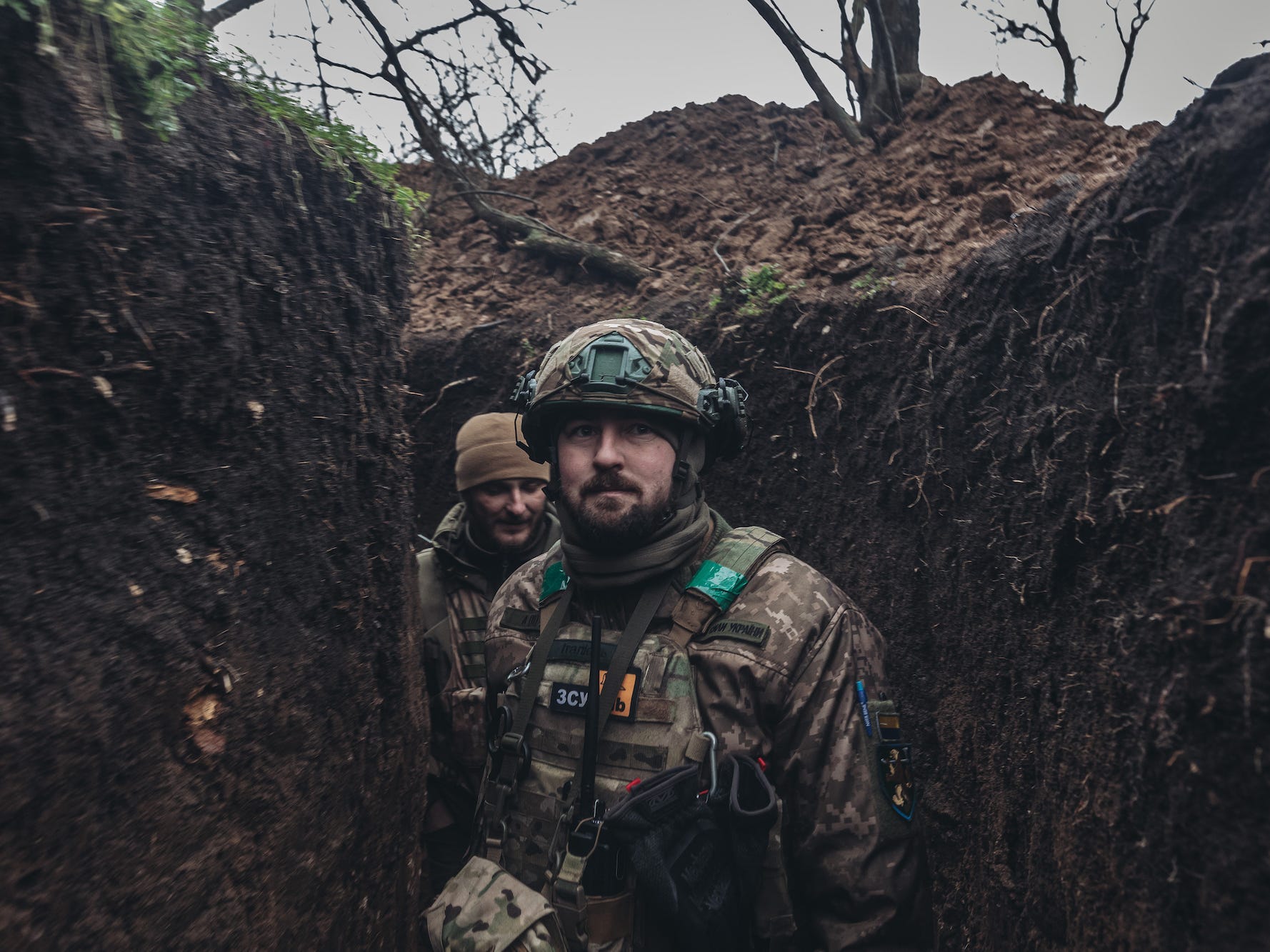 Ukrainian soldiers in a trench on the Vuhledar frontline in Donetsk oblast, 5 January 2023.

Both Ukraine and Russia have used drones of all shapes and sizes to spy on each other and to strike targets on a scale that’s never been seen before, and it’s changing the face of warfare. Drones are being used to locate enemy positions and direct fire, crash into and destroy buildings in “kamikaze” attacks, and drop bombs on tanks.

With much of the fighting occurring in rural areas with large open fields that are often dangerous to cross — a modern equivalent of WWI’s horror-filled “No Man’s Land” — drones have proven to be an extremely useful and deadly tool. Both sides are using drones equipped with cameras or other sensors that offer a livestream that can be watched on a laptop or digital tablet to scout out the enemy and coordinate attacks from afar.

Drones have played an important role in adjusting artillery fire and confirming that targets were hit or destroyed. They’re an eye in the sky on the battlefield in Ukraine that’s making artillery even deadlier.

“Unmanned systems have been used in greater and greater numbers in conflicts over the last decade, but the Ukraine war took it to a new level. But it is not just about the numbers, but the type of war. Up to last year, there was an active debate as to whether drones could play a role in conventional war, instead of just missions like Afghanistan,” P.W. Singer, a leading expert on modern warfare and senior fellow at the New America think tank in Washington, told Insider.

“That debate is now over,” Singer added.

‘The future of warfare’ 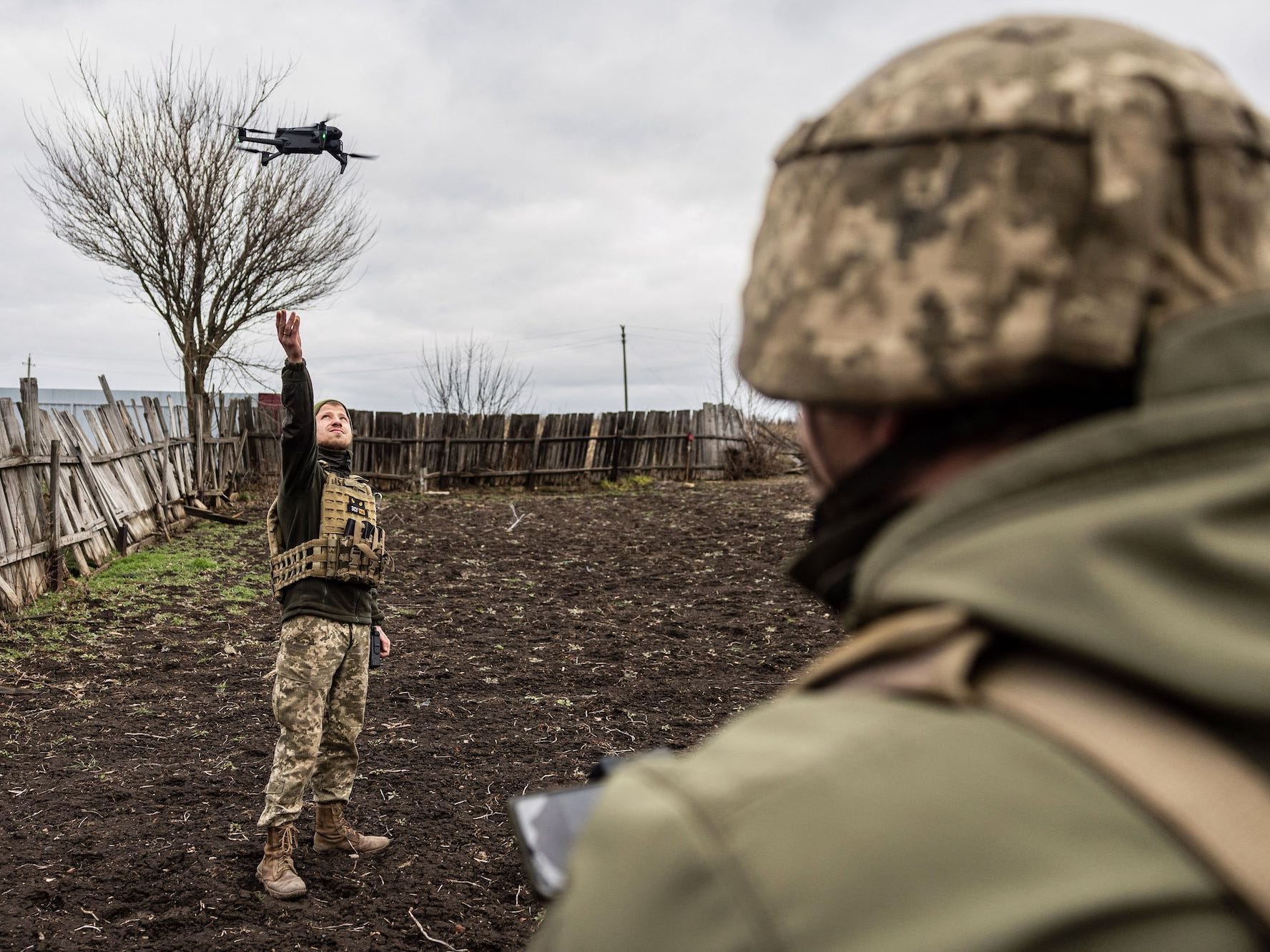 Ukrainian servicemen fly a drone on the outskirts of Bakhmut, eastern Ukraine on December 30, 2022.

Unmanned aerial vehicles, commonly known as drones, have been used in various capacities in warfare for generations. Some researchers point to Austria’s use of pilotless hot-air balloons to bomb Venice in 1849 as the first example.

The US began developing unmanned aircraft as far back as World War I. Remotely piloted aircraft were used for surveillance during the Cold War, and unmanned technology gradually advanced over the 20th century. By the late 1990s, Predator drones were being used by the US and NATO for reconnaissance missions in the Kosovo War.

But it was the onset of the war on terror that saw the use of drones rise exponentially and move away from primarily being employed for reconnaissance. In the years since the 9/11 terror attacks, the US military and CIA have used drones for the surveillance and targeted killings of suspected terrorists in places like Afghanistan, Pakistan, Somalia, and Yemen.

Armed drones have also been used in other conflicts, including in fighting between Azerbaijan and Armenia. Drones have become increasingly attractive to militaries worldwide as the technology has advanced and gotten cheaper. These systems can gather intelligence and execute missions that might otherwise risk the life of a pilot and cost less than building a traditional air force.

The war in Ukraine, however, marks the first time that we’ve seen drones employed in a conflict involving major powers and modern armies on both sides and used so “extensively and over an extended period of time,” Cancian said.

Ukraine has in many ways emerged as a guinea pig for drone warfare. A wide array of unmanned aerial vehicles produced everywhere from the US to China and from Turkey to Iran have been used in battle.

In the early days of the fighting, Ukraine saw success using the Turkish-made Bayraktar TB2 drone to rain hell from above on key Russian assets like armored vehicles. A Bayraktar — which has a range of 186 miles, is the size of a small plane, and is capable of carrying laser-guided bombs — was involved in the attack that sank the Moskva, the flagship of Russia’s Black Sea fleet. 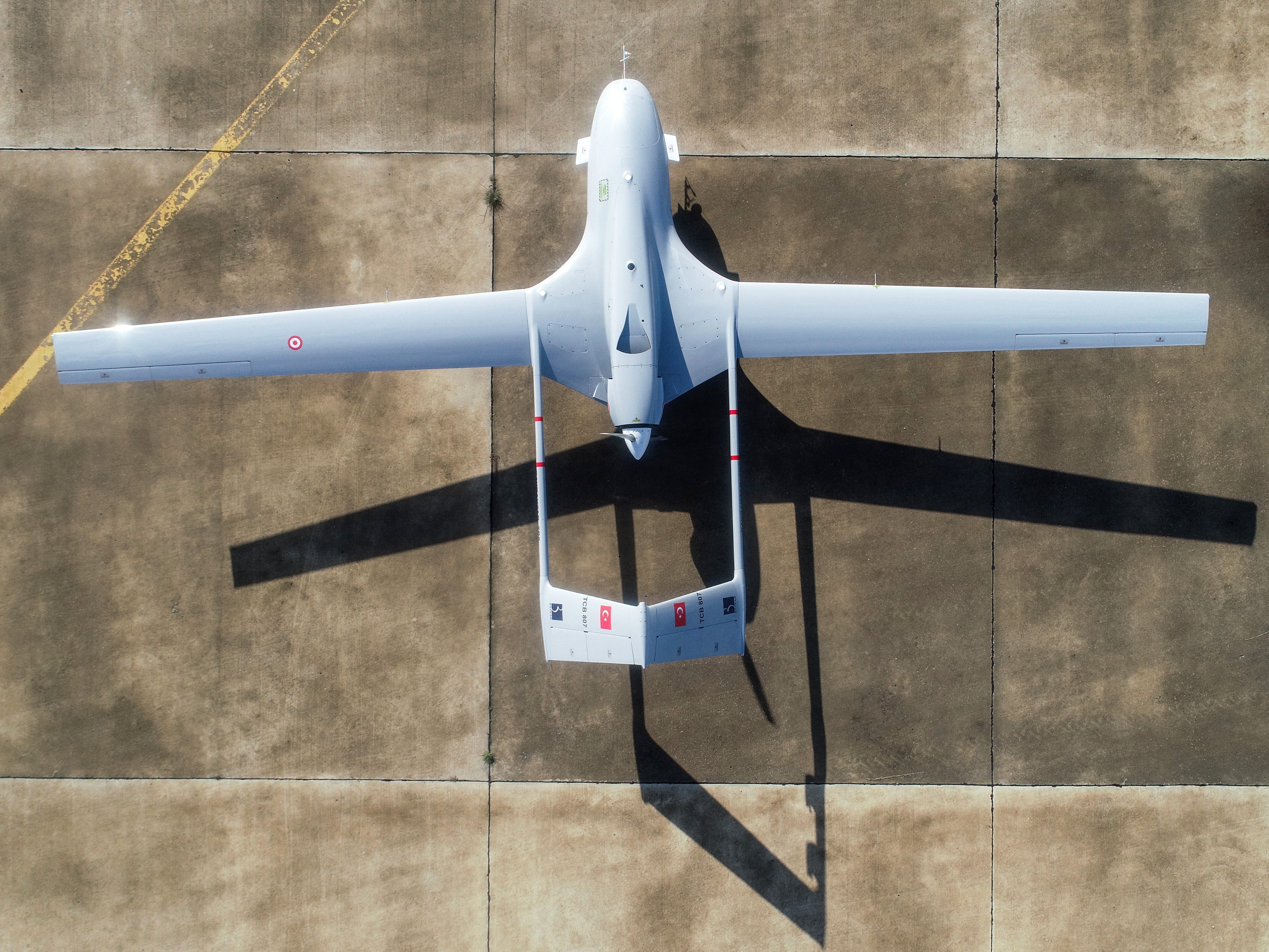 The Turkish-made Bayraktar TB2 drone has been a key instrument used by the Ukrainian military to repel Russian forces.

Later in the war, Russia began launching swarms of Iranian-made Shahed-136 “kamikaze” drones, striking targets across Ukraine. The Shahed-136 is a loitering munition — designed to linger or loiter before locating a target and crashing into it. It’s less than 12 feet long, can fly at 115 mph, contains an explosive warhead in its nose, and explodes on impact. These single-use drones are relatively cheap ($20,000 each) and have been used by Russia to destroy vital civilian infrastructure and make life even harder for Ukrainians.

The US has also provided Ukraine with hundreds of Switchblade drones, a type of loitering munition or kamikaze drone, which can be carried in backpacks. Switchblades can be used to strike infantry, armor, and artillery.

“We’re seeing the first use of swarm drones with what have been called ‘kamikaze’ drones, these Iranian Shahed-136s and all of their various relatives — that’s new,” Cancian said, adding, “A lot of people have pointed to that as the future of warfare.”

Singer said the Russian military’s use of drones to strike civilian targets sets a dangerous precedent for the future of war.

“It is a parallel to the German use of V-1 missiles towards the end of World War II,” he said. “A nation hoping a new technology will make up for its losses on the battlefield, by terrorizing the home-front.” 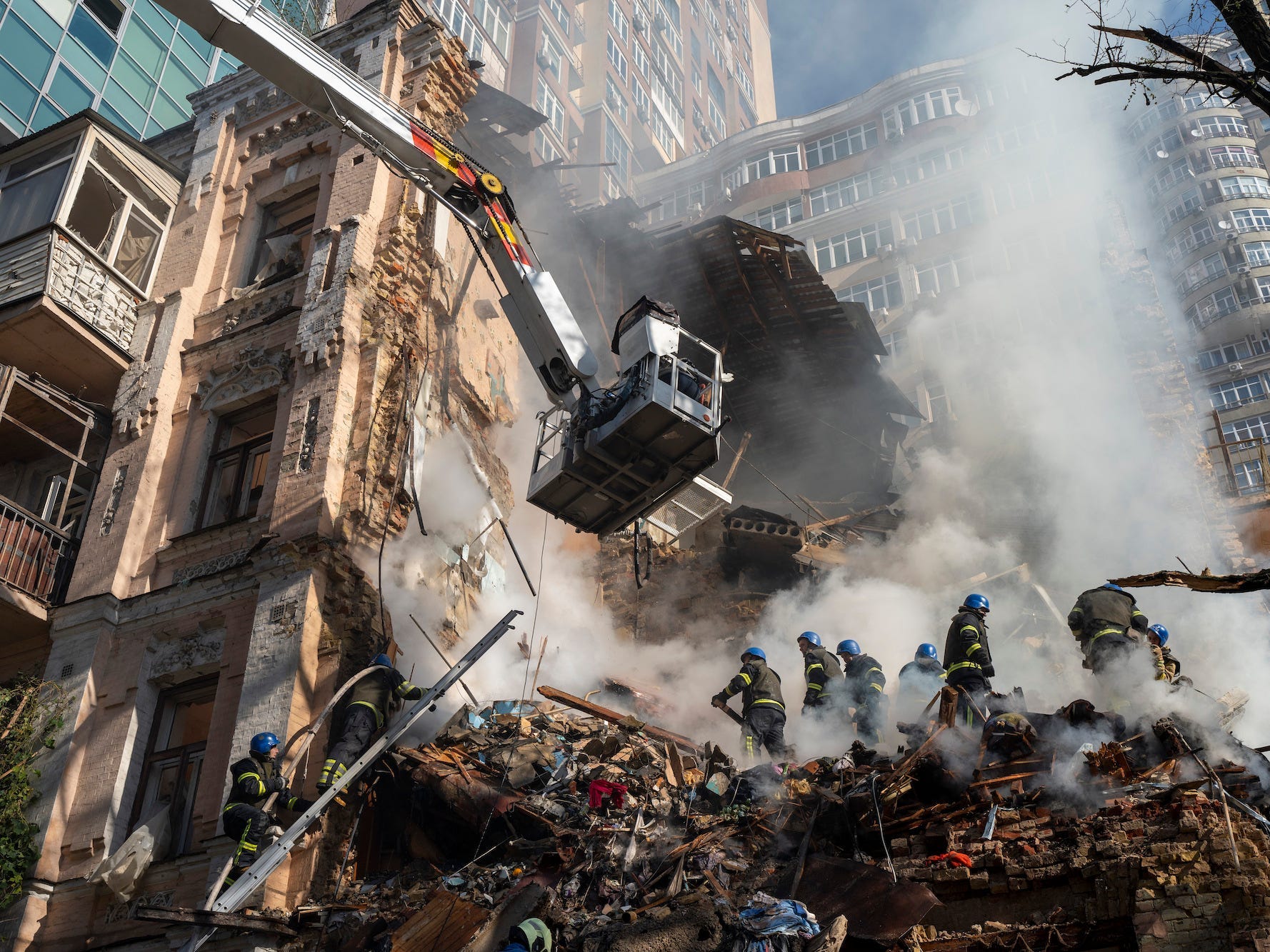 Firefighters work after a drone attack on buildings in Kyiv, Ukraine, Monday, Oct. 17, 2022.

The most prevalent drone on the battlefield in Ukraine can fit in your hand. Indeed, military analysts have been particularly surprised by the heavy reliance on small civilian or commercial drones such as the Chinese-made DJI Mavic 3, which cost less than $3,000 online.

These drones are being used for reconnaissance but have also been weaponized, with soldiers rigging them with improvised explosive devices or grenades.

“Both Ukraine and Russia are now using them in literally hundreds. Every small infantry unit now has one or more flying for them. It was not something that militaries had been training for,” Singer said of the use of cheap commercial drones in Ukraine.

Drones are not necessarily the most important or impactful tool being used in Ukraine, but they’re making other weapons more accurate.

“If you wanted to seek out enemy positions in the past, you would have had to send out special forces units… and you might have lost some troops,” Marina Miron, a defense researcher at Kings College London, told BBC News in early January. “Now, all you’re risking is a drone,” Miron added.

The surveillance element has been significant, with troops on the front line in Ukraine reporting that drones are “always around,” Cancian said, adding, “They’re always being watched.” 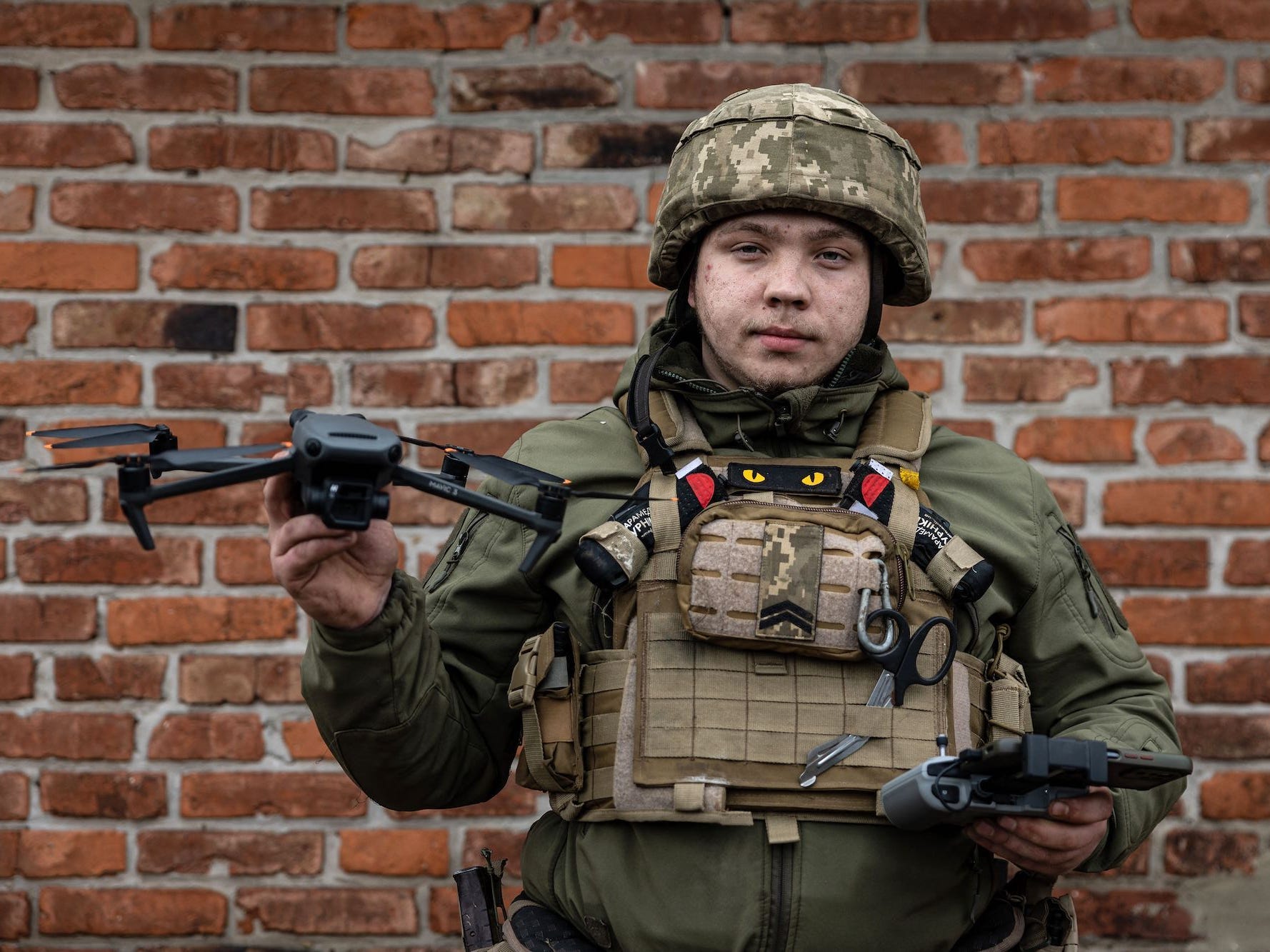 A Ukrainian serviceman poses with a drone on the outskirts of Bakhmut, eastern Ukraine on December 30, 2022. 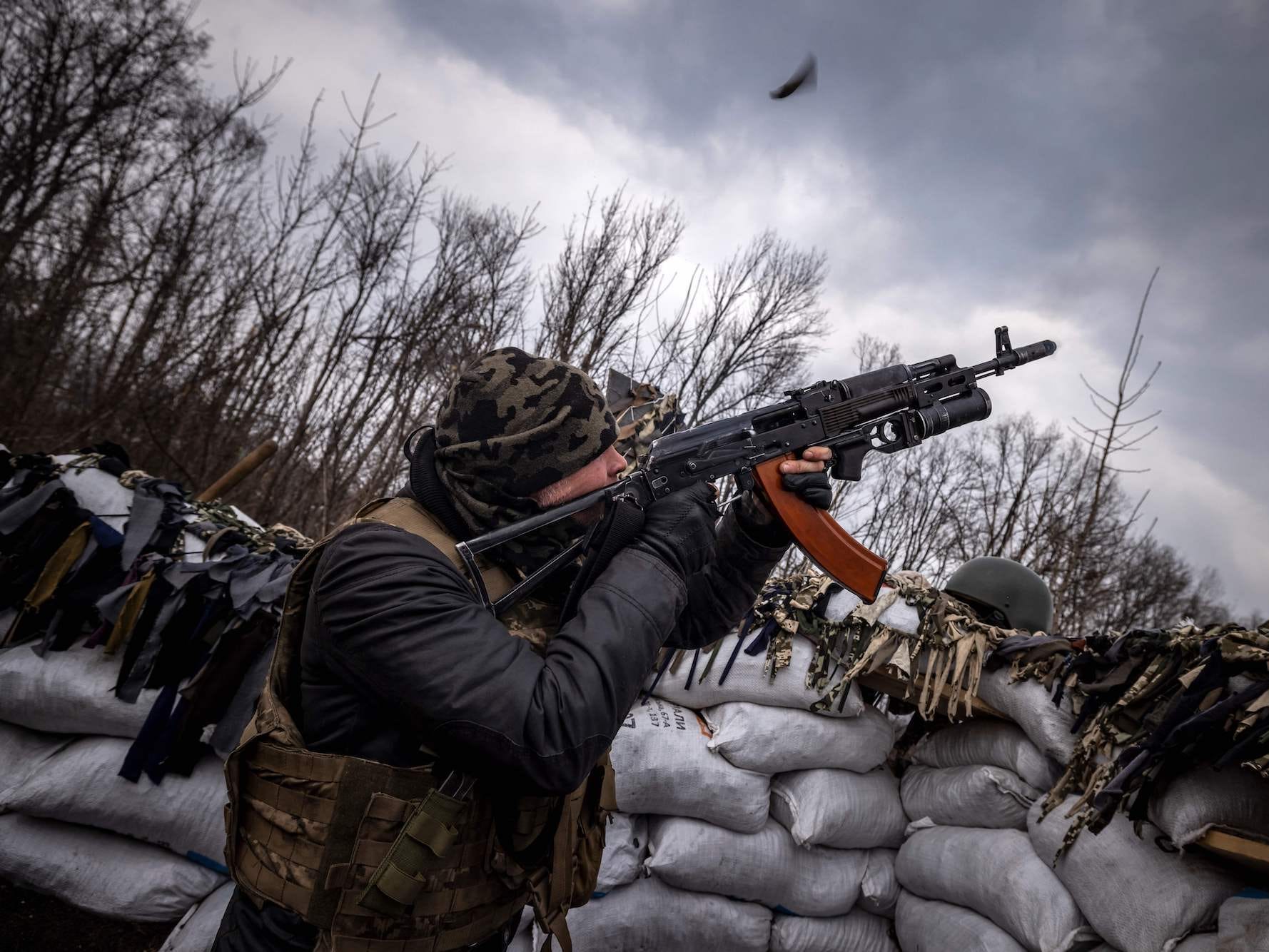 A Ukrainian serviceman shoots at a Russian drone with an assault rifle from a trench at the front line east of Kharkiv on March 31, 2022.

“We’ve had overhead reconnaissance for a long time, but the scale of it is new and also the ability to connect that with fire support,” Cancian said. “It’s one thing to get a picture of a target and be able to do something about it 24 or 48 hours later, as opposed to being able to do something in 10 minutes.”

Drones have significantly shortened the so-called kill chain, Cancian explained, helping troops swiftly locate targets and provide coordinates for artillery. “Kill chain” is a military phrase or concept referring to the stages of an attack, from identifying a target to engaging it and assessing the damages.

The war in Ukraine has shown that drones are “as essential” in battle as artillery or tanks, Singer said, adding that “drones have arguably been most valuable not in launching their own missiles, but in making Ukrainian artillery so lethal, in pinpointing their fires.”