In 2023, TIME will once again recognize 100 businesses making an extraordinary impact around the world. Applications for the TIME100 Most Influential Companies of 2023 are open, now through March 1, 2023. Apply here.

Hello from the Magic Mountain of Davos, where the World Economic Forum is well underway. We’ll be bringing you the latest from this week’s gathering, including insights on the most-talked about issues, quote-worthy things said, and more. You can find our first installment here. You can also pick up a copy of TIME’s Davos special issue in the Congress Centre or read our stories here.

The last time the WEF convened in May, it was three months into the Russian invasion of Ukraine—a topic that, unsurprisingly, dominated the gathering. This year, as the war approaches its first anniversary, Ukraine remains very much top of mind. World leaders have seized on every opportunity to reiterate their support for Ukraine. “We are in it for as long as it takes,” European Commission President Ursula von der Leyen told Ukrainian First Lady Olena Zelenska on Tuesday, a refrain that has since been echoed by German Chancellor Olaf Scholz, U.S. Sen. Joe Manchin, and Swedish Foreign Minister Tobias Billström. Several members of the U.S. congressional delegation have been spotted wearing U.S. and Ukraine flag pins on their lapels.

Ukraine’s visibility extends beyond the forum’s main Congress Centre. On the promenade, Davos’s main thoroughfare, Ukraine House broadcasts images from the streets of war-torn Kherson. Russia House, previously a fixture on the promenade, is nowhere to be seen. Neither are any Russian officials.

Though Ukraine remains central to the outward facing narrative at Davos and in conversations among the geopolitically-inclined, some Davos attendees told TIME that the same cannot be said for the forum’s more corporate-minded settings. “When you get into meetings with corporate actors, it has not been my experience that Ukraine is the primary concern of the agenda,” Amnesty International secretary general Agnes Callamard told TIME. “There is a sense on the part of the corporate sector that they’ve done what needed to be done for Ukraine.”

Many, though not all, companies have suspended their operations in Russia. Others, such as Microsoft and Google, are providing humanitarian aid to the country. But for the war to end sooner rather than later, Ukrainian delegates told TIME, they need more support from the private sector—and not just after the war ends. “We really need the end and the victory to be this year,” says Ukrainian lawmaker Alona Shkrum, noting that neither Ukraine nor its partners can afford for this war to go on indefinitely. “We can win. We just need more weapons and more air defense.”

Businesses donating humanitarian aid is one thing; supplying funding for defensive weapons systems is quite another. But as some Ukrainians see it, donated laptops to support the education of Ukrainian children can only go so far in a country that barely has electricity, let alone schools that can be shielded from Russian shelling.

“It would be cheaper to buy the air defense systems and close the sky than to rebuild later,” says Ukrainian lawmaker Oleksandra Ustinova, who leads Ukraine’s temporary special commission on arms control. But understandably, she adds, “businesses don’t want to get into this.”

The Ukrainian delegation are not the only ones raising the issue of the war at Davos. Belarusian opposition leader Sviatlana Tsikhanouskaya, the first representative from Belarus to attend WEF in three decades, has spent the past few days reminding attendees that the crises in her home country and Ukraine are intertwined. “Belarus now is overlooked, we feel this,” Tsikhanouskaya told TIME, noting that so long as Belarusian dictator and Kremlin ally Alexander Lukashenko remains in power, and so long as Minsk continues to host Russian soldiers on its territory, “there will be a constant threat to our neighbors.”

Phrase of the day

Ukrainian First Lady Olena Zelenska has been quizzed about many things during her time in Davos, though perhaps nothing more so than the prospect of “Ukraine fatigue.”

“To be completely honest with you, I really have the fatigue of the questions about the fatigue,” Zelenska told TIME during a press briefing on Wednesday. Based on her experience at Davos, she added, “it seems like an exaggeration. And I think this may be a part of the information warfare because I think our enemy would be very happy if people were fatigued from Ukraine.”

ChatGPT and the potential of artificial intelligence (AI) have been hot topics at this year’s WEF. Microsoft chairman and CEO Satya Nadella extolled the virtues of GPT technology in conversation with WEF’s Klaus Schwab Wednesday. The company is reportedly mulling a $10 billion investment in OpenAI, the company behind ChatGPT.

But as a TIME investigation reveals, the workers in Kenya who helped make ChatGPT possible faced poor working conditions. The story of these workers demonstrates that for all its glamor and buzz, AI often relies on hidden human labor in the Global South that can be damaging and exploitative. These invisible workers remain on the margins even as their work contributes to billion-dollar industries. 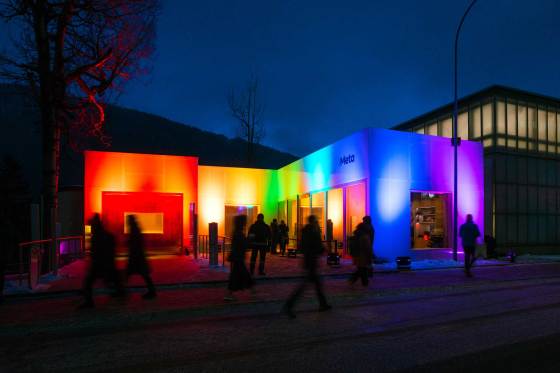 Courtesy of METAVisitors walk along the Rainbow Promenade in Davos.

—With reporting by Ayesha Javed

Home » Audio Sources - Full Text Articles » Ukraine Is Top of the Agenda in Davos. But Some Fear Support From Businesses Has Peaked
a