Millions of social media users are reacting solemnly to the image of a bright yellow kitchen in Ukraine that captures the grim reality of Russia’s targeting of infrastructure across the country.

The photo, taken by 36-year-old Ukrainian photographer Yan Dobronosov, shows a home whose external wall was torn off after a 38-foot Russian missile struck the apartment building. The yellow kitchen inside remains almost untouched, with fruit still on the table.

Dobronosov says he arrived on-scene a day after the missile struck and initially took photos from below before using a drone to capture the scene in the photo as soon as he saw the kitchen table above him. The pictures were reminiscent of his own home, he tells TIME.

“It struck me because in the photo there is a big difference between life and death,” he says by email, calling the image symbolic.

The attack killed 45 people in the city of Dnipro on Jan. 14, including popular boxing coach Mykhailo Korenovsky, who lived in the apartment complex. He is survived by his wife and daughters, who had gone on a walk at the time of the airstrike, according to CBS News. 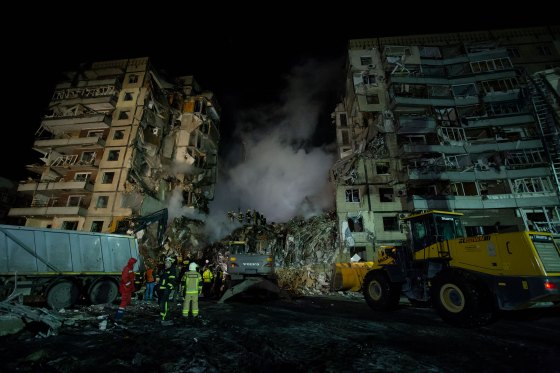 Yan Dobronosov—Global Images Ukraine/Getty ImagesFirefighters stand near a dump truck while their colleagues are conducting search and rescue operations at a residential building hit by a missile in Dnipro, Ukraine on Jan. 15, 2023. 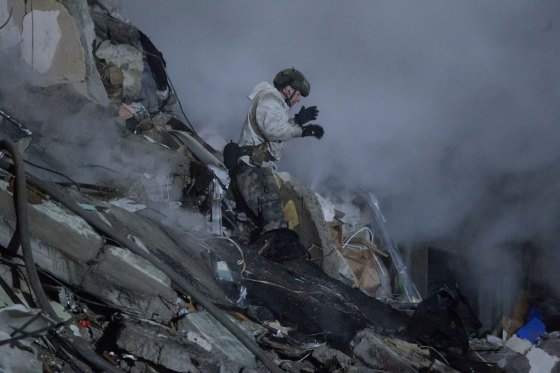 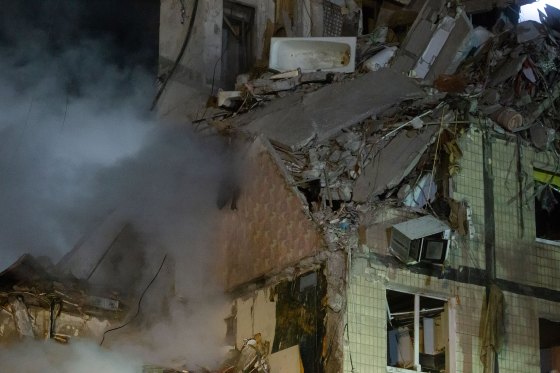 Yan Dobronosov—Global Images Ukraine/Getty ImagesA bathtub lies amid rubble of a residential building in Dnipro hit by a missile, on Jan. 15.

As of November 2022, Russia and Ukraine have each suffered more than 100,000 casualties, according to the New York Times.

Dobronosov, who has been capturing images of the fighting in Ukraine since 2014, says that these past few months have been some of the toughest—though he is no stranger to the type of scenes shown in this photo.

“We have already seen this during the war in Borodyanka, Izum and others, when houses stand [blasted] in half,” he says. Borodyanka was one of the first cities to be hit by Russian missiles after the country invaded Ukraine on Feb. 22. At least 200 people died and four apartment buildings collapsed, the Times reports.

A video of the victim’s family reportedly celebrating his daughter’s birthday in that same kitchen is also circulating online, reminding many of just how quickly life can be taken.

“This is heart wrenching. The pain and terror Ukrainians are going through is unacceptable and heartbreaking. I am so so sorry. Sending love and light,” said one Twitter user reacting to the news.

Home » Audio Sources - Full Text Articles » The Story Behind the Ukraine Yellow Kitchen Photo, and What It Says About the War Now
a