Ukrainian President Volodymyr Zelenskiy told the U.S. Congress on Wednesday that the tens of billions of dollars of aid it had approved to help it fight a Russian invasion was not charity, but an investment in global security.

In his first visit out of his country since the war began in February, Zelenskiy told lawmakers in the soaring House of Representatives chamber that he hoped they would continue to support Ukraine on a bipartisan basis – a major point as Republicans are due to take the majority in the House on Jan. 3.

“Your money is not charity,” Zelenskiy said, clad in the khaki fatigues that have been his public uniform throughout the 300 days of conflict. “It is an investment in the global security and democracy.”

Following a meeting at the White House with Democratic President Joe Biden, Zelenskiy’s speech needed to resonate with House Republicans, who have voiced increasing skepticism about continuing to send so much aid to Ukraine.

Zelenskiy’s arrival was greeted with multiple raucous ovations in the nearly full chamber. Three members held up a large Ukrainian flag as he walked in.

“It is a great honor for me to be at the U.S. Congress and speak to you and all Americans. Against all doom and gloom scenarios, Ukraine did not fall. Ukraine is alive and kicking,” said Zelenskiy.

“We defeated Russia in the battle for the minds of the world,” he said.

Zelenskiy joined a long list of world leaders to address joint meetings of the Senate and House, a tradition that began in 1874 with a visit by Hawaiian King Kalakaua and included almost legendary wartime visits by British Prime Minister Winston Churchill, as well as kings, queens and one pope.

House members and senators from both parties leaped repeatedly to their feet to cheer parts of Zelenskiy’s speech in English such as, “Ukraine holds its lines and will never surrender,” as he likened his country’s battle against Moscow’s forces to great battles of World War Two and even the American Revolution.

There are no signs of peace talks to end the war and both Russia and Ukraine have signaled a willingness to keep fighting, although Zelenskiy said he discussed a 10-point Ukrainian peace formula with Biden.

“I’m glad that President Biden supported our peace initiative today. Each of you today ladies and gentlemen can assist in the implementation to ensure that American leadership remains solid, bicameral, and bipartisan,” Zelenskiy said to the lawmakers.

Planning for Zelenskiy’s speech began in October, according to an aide to Democratic House Speaker Nancy Pelosi, when she met with Ruslan Stefanchuk, chairman of Ukraine’s parliament, the Verkhovna Rada. Pelosi was attending the First Parliamentary Summit of the International Crimea Platform in Zagreb, Croatia, at the time.

Exactly 300 days after Russian troops invaded and amid intensified rocket attacks that have left Ukrainian cities in ruins, Zelenskiy arrived knowing that the Senate and House control America’s purse strings.

His timing was perfect, as Congress is on the verge of approving an additional $44.9 billion in new emergency military and economic assistance, on top of some $50 billion already sent to Ukraine this year.

Daniel Fried, former U.S. ambassador to Poland and a fellow at the Atlantic Council, said Zelenskiy’s trip demonstrated that he and Biden share a belief that the United States, despite its faults, is leader of the free world.

Zelenskiy, Fried said, “didn’t go to Berlin, Brussels, London or Paris” for his first trip abroad since the start of the war.

The 44-year-old Zelenskiy, a former comedian and actor, also visited Washington on a day that the Senate overwhelmingly confirmed a new ambassador to Russia.

The optics of Zelenskiy’s welcome as a defender of democracy carried a message far deeper than military aid. It was meant to signal to Russian President Vladimir Putin that the United States and its NATO allies remain steadfastly behind Ukraine, despite recent signs of impatience among some Republican lawmakers over the rising cost.

For Zelenskiy, whose wartime olive fatigues have become globally recognized, the House overlooked a rule that normally requires men to wear a jacket and tie inside the chamber. 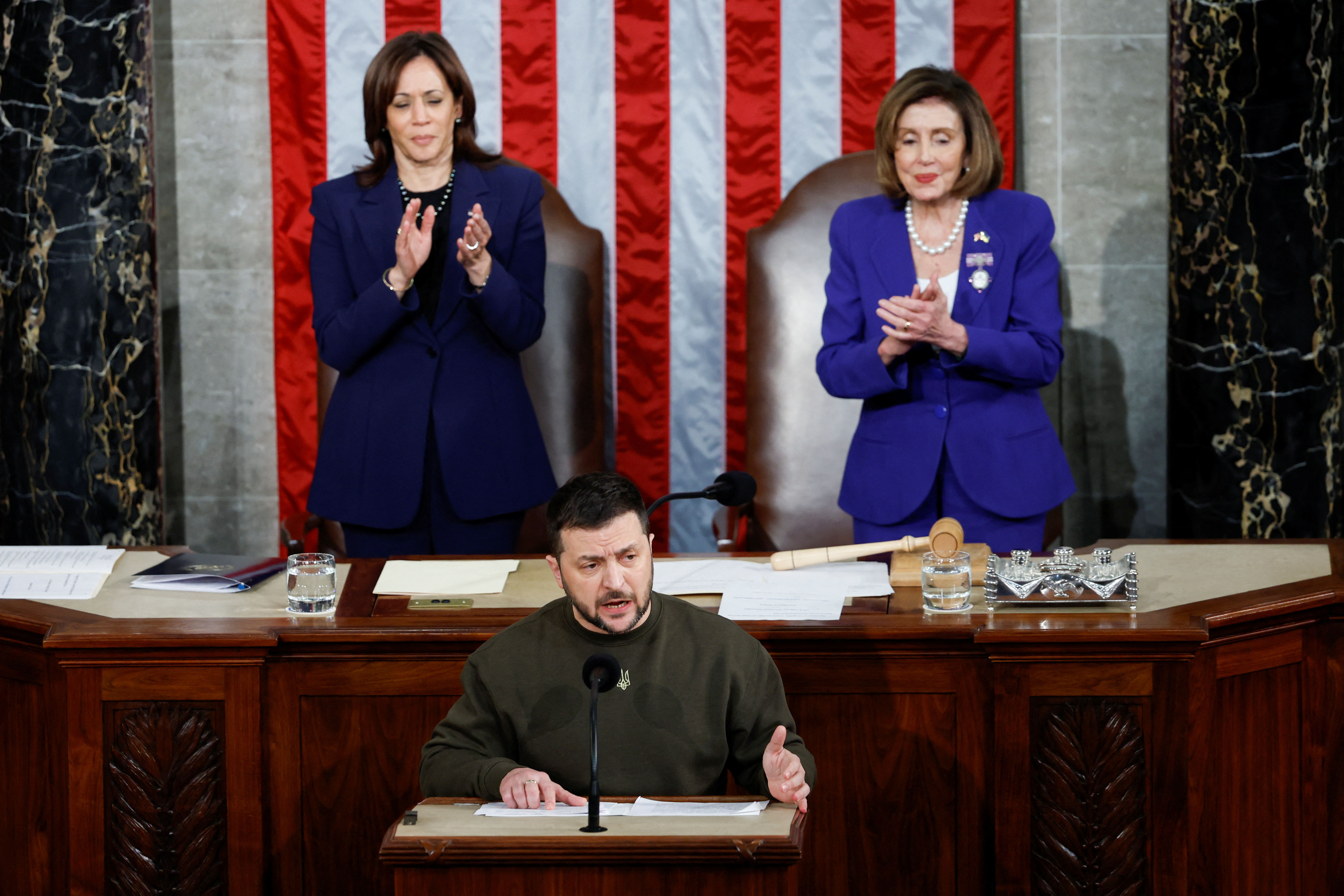 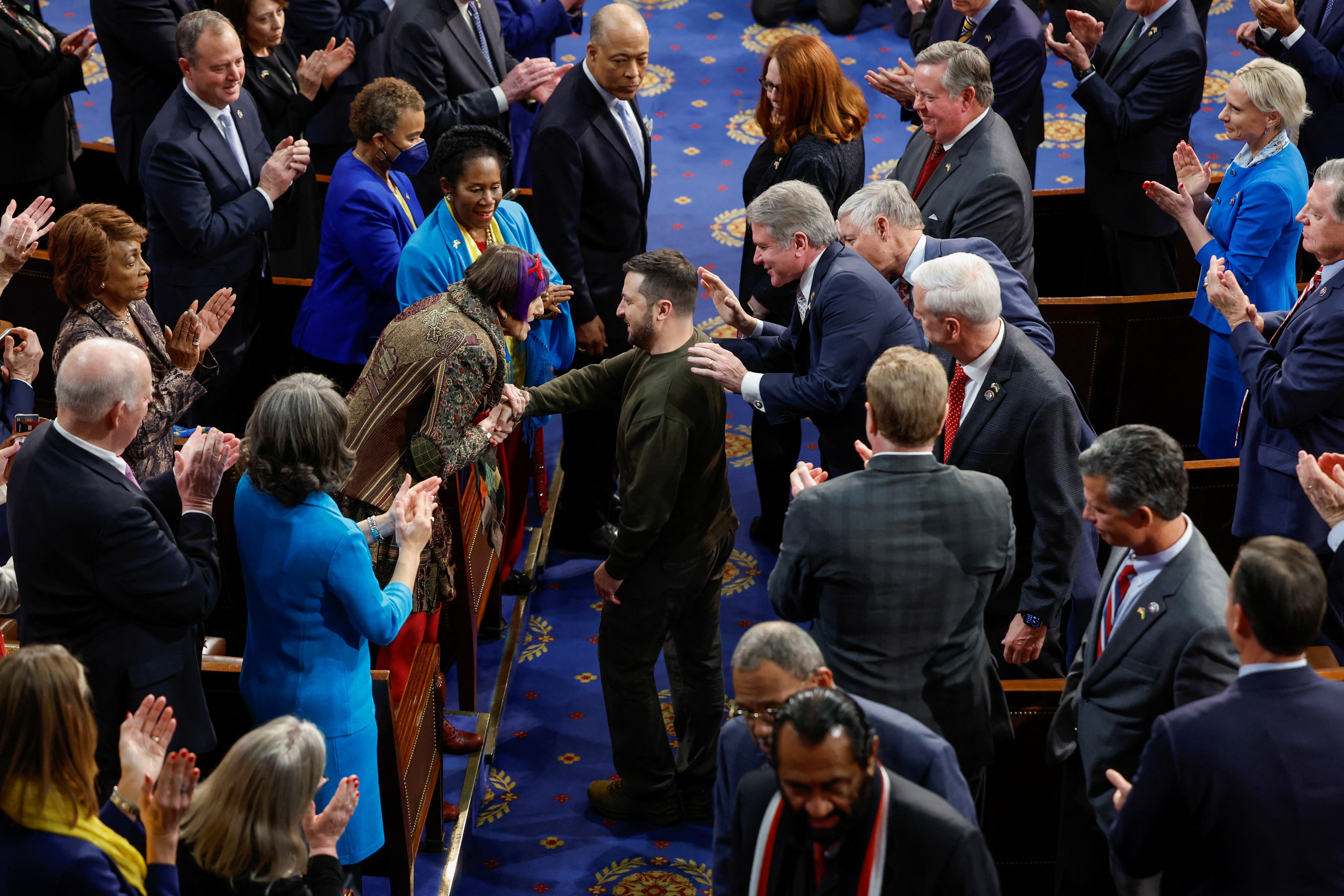 Ukraine’s President Volodymyr Zelenskiy arrives to address a joint meeting of the U.S. Congress in the House Chamber of the U.S. Capitol in Washington, U.S., December 21, 2022. REUTERS/Evelyn Hockstein 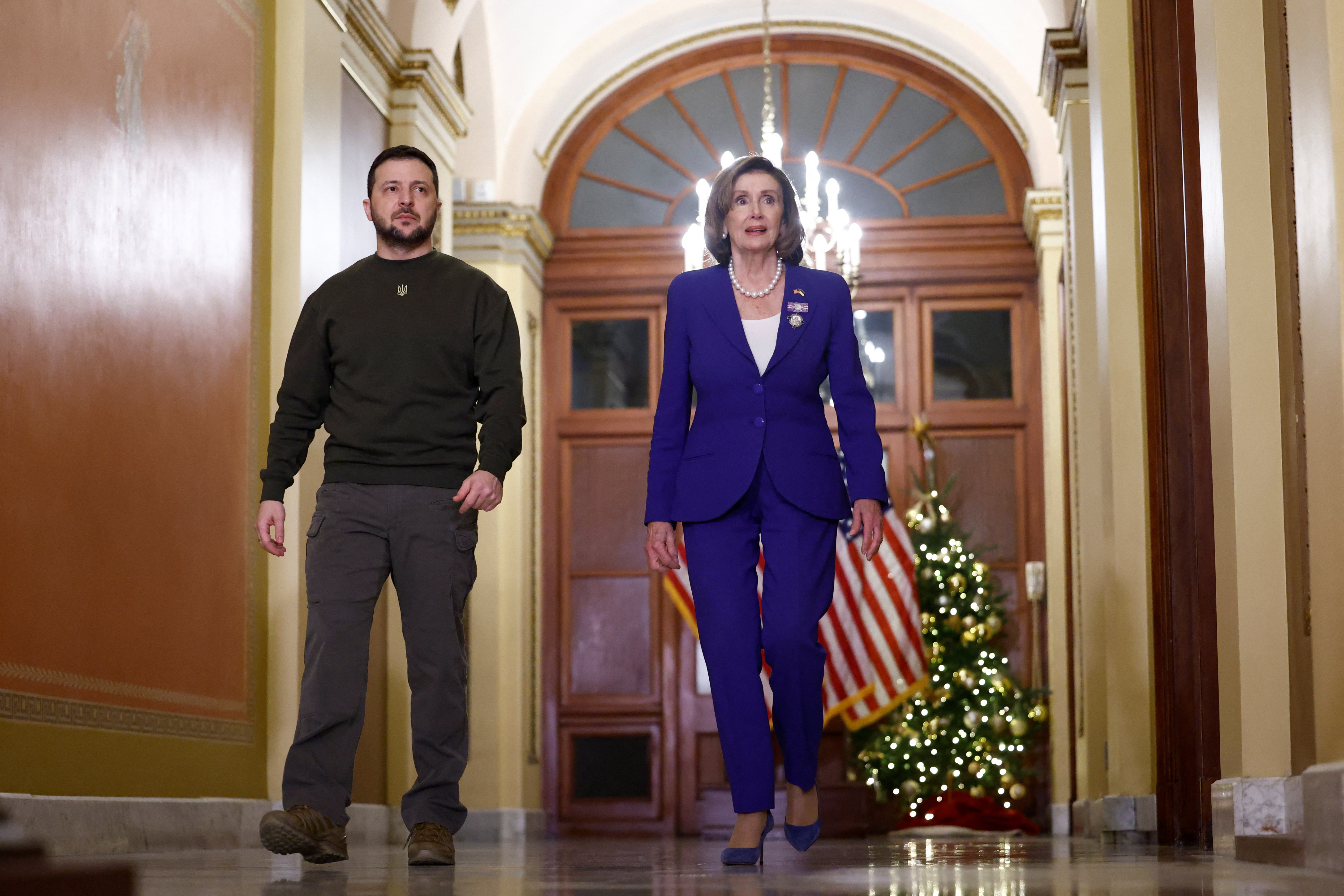 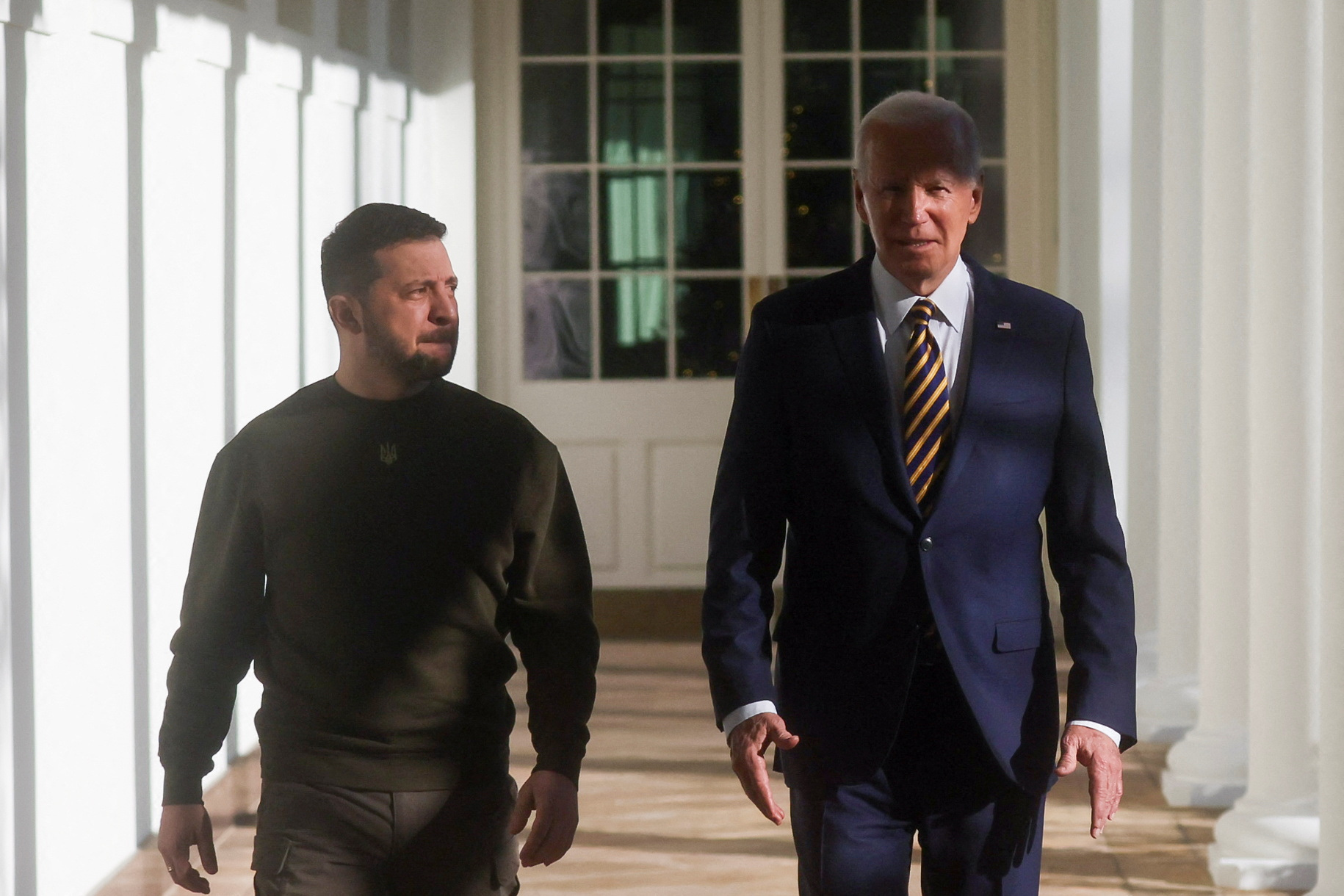 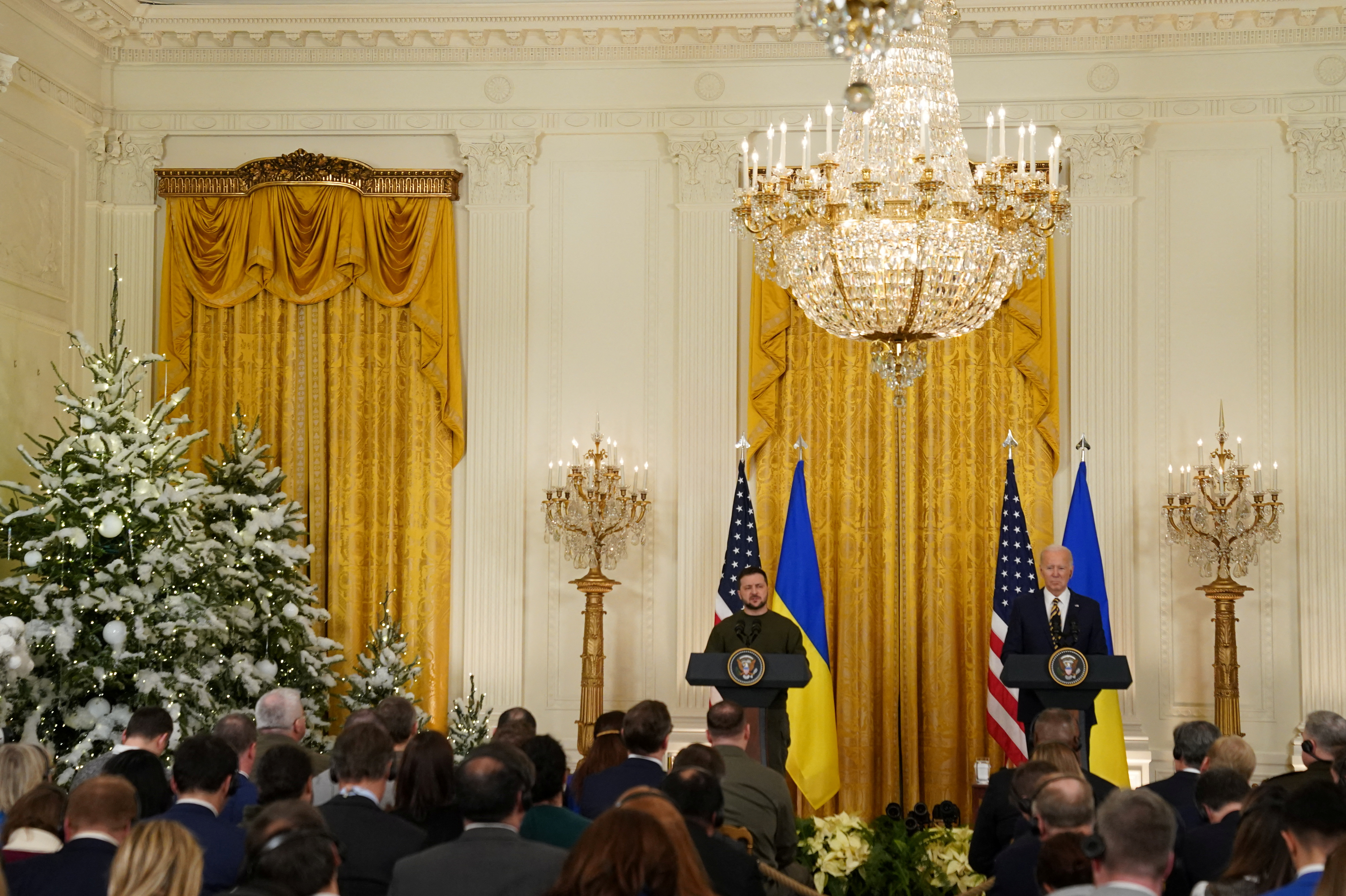 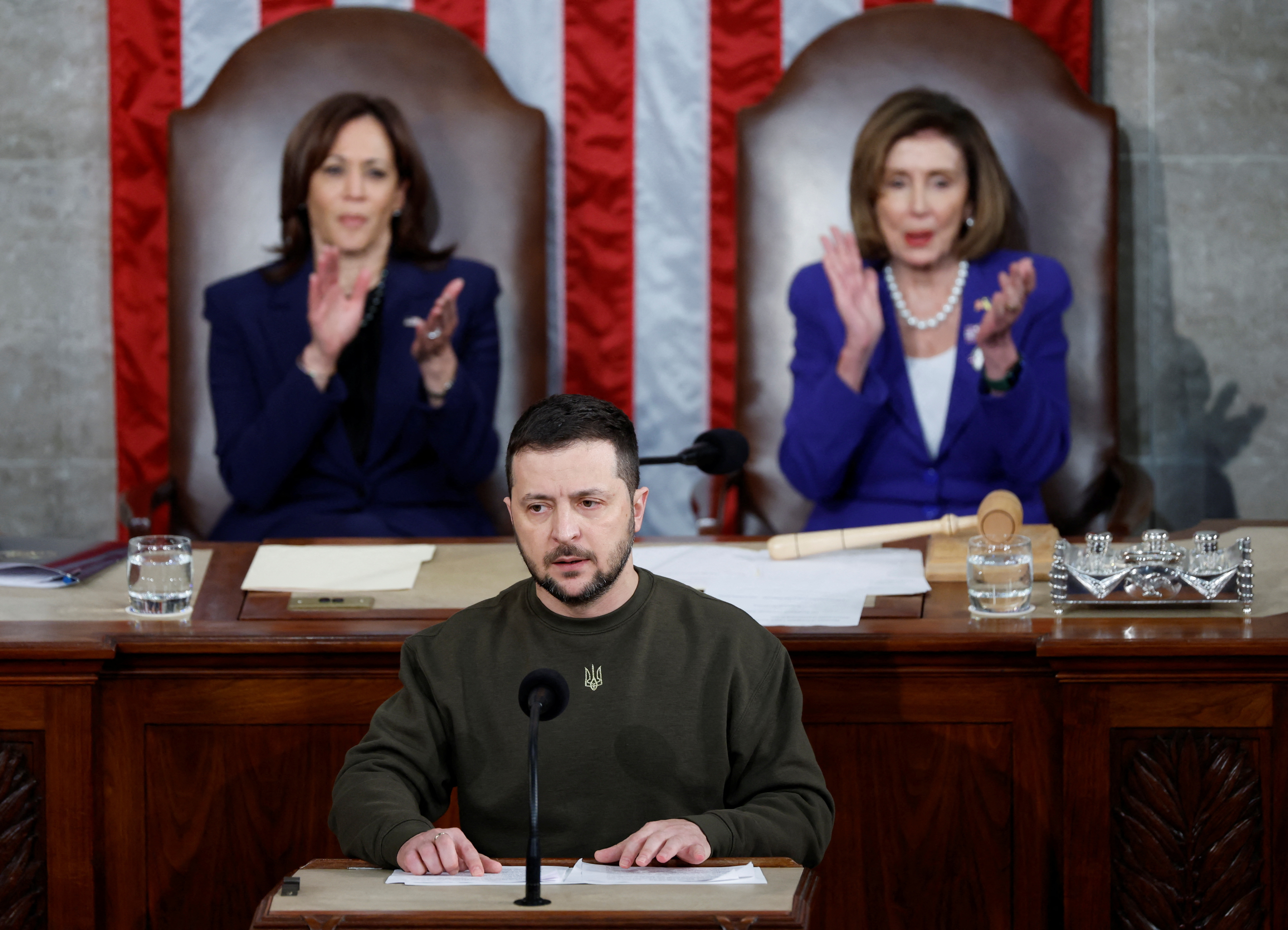 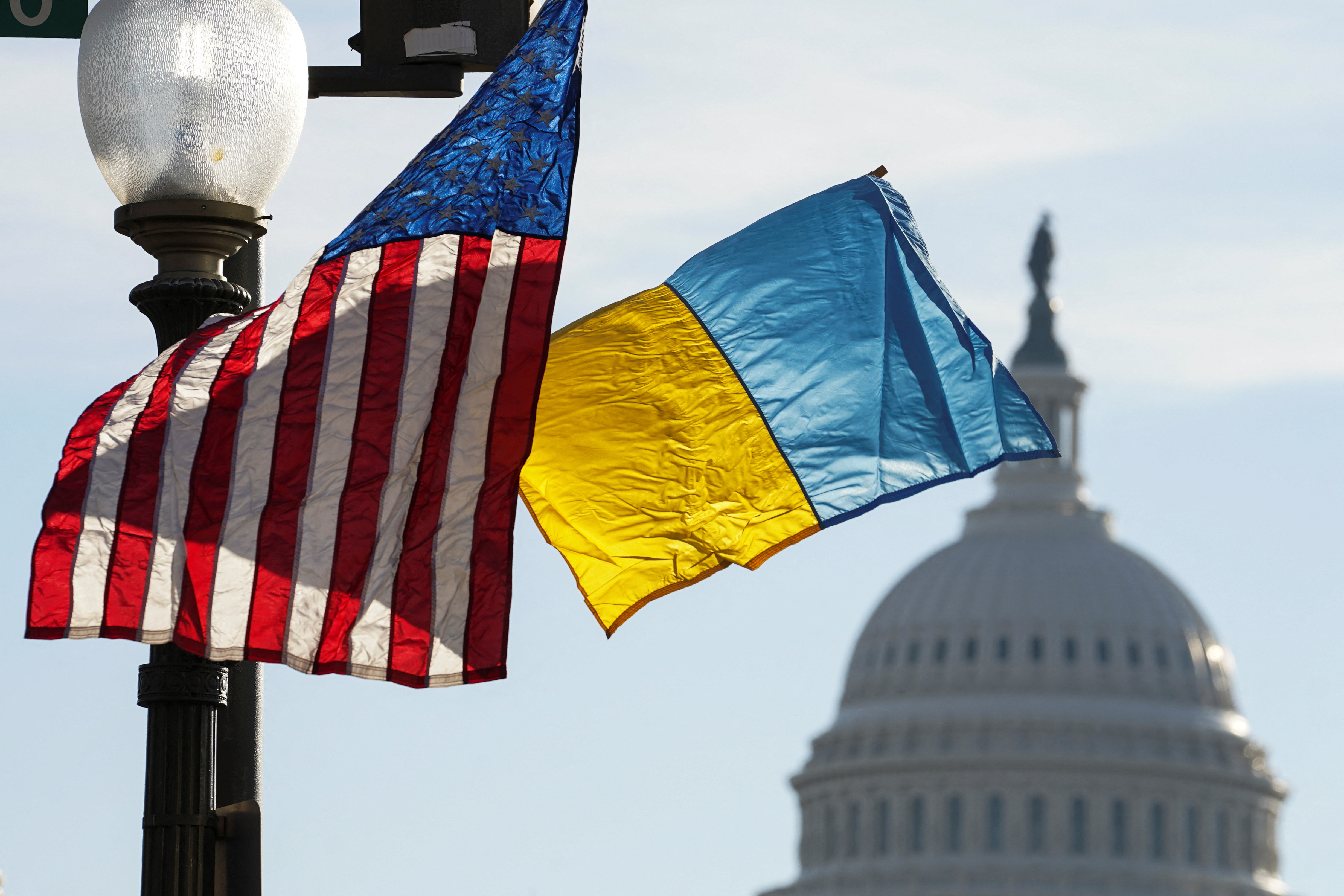 Ukrainian and U.S. flags are flown along Pennsylvania Avenue leading to the U.S. Capitol ahead of a visit by Ukraine’s President Volodymyr Zelenskiy for talks with U.S. President Joe Biden and an address to a joint meeting of Congress in Washington, U.S., December 21, 2022. REUTERS/Kevin Lamarque 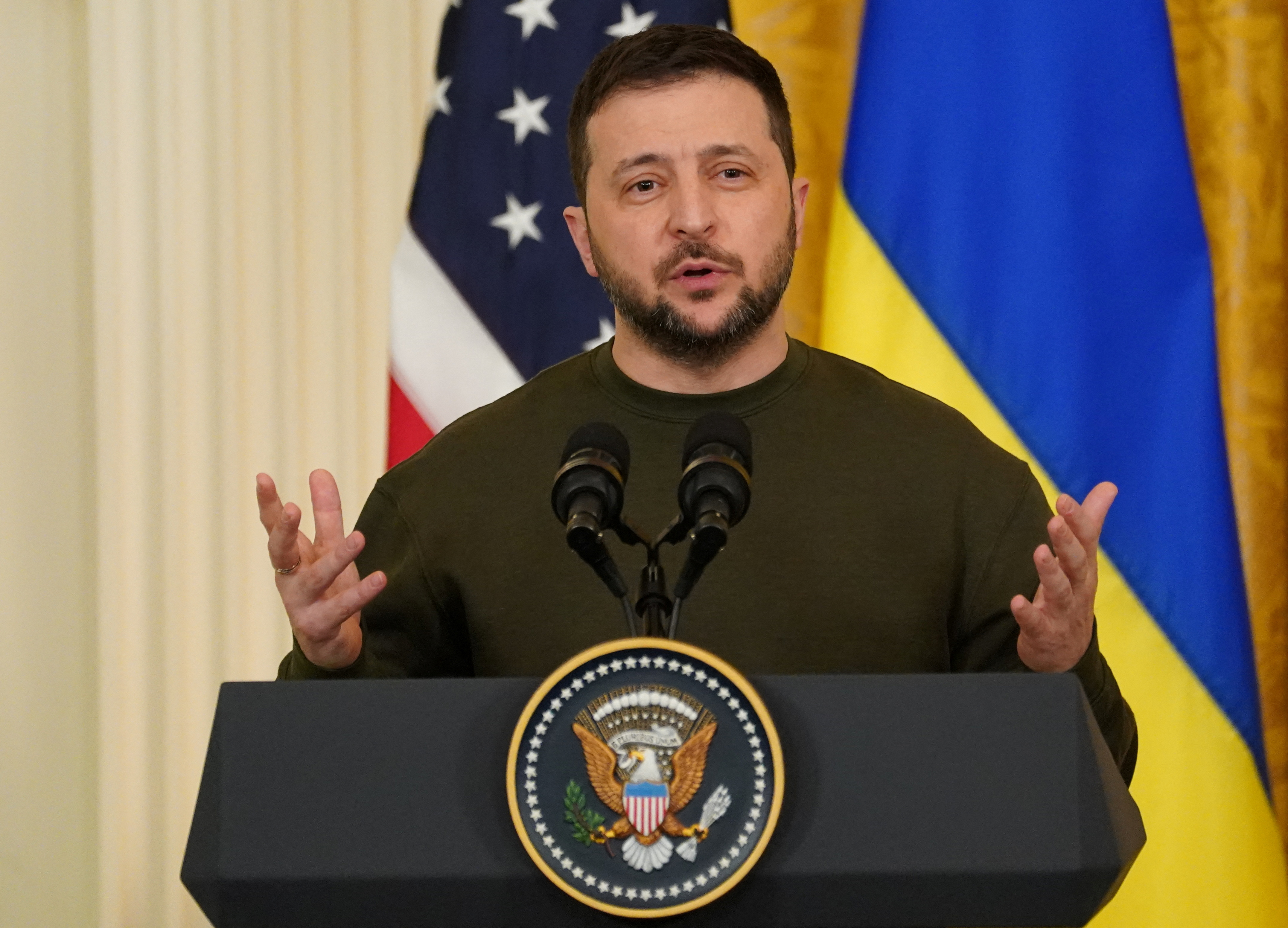