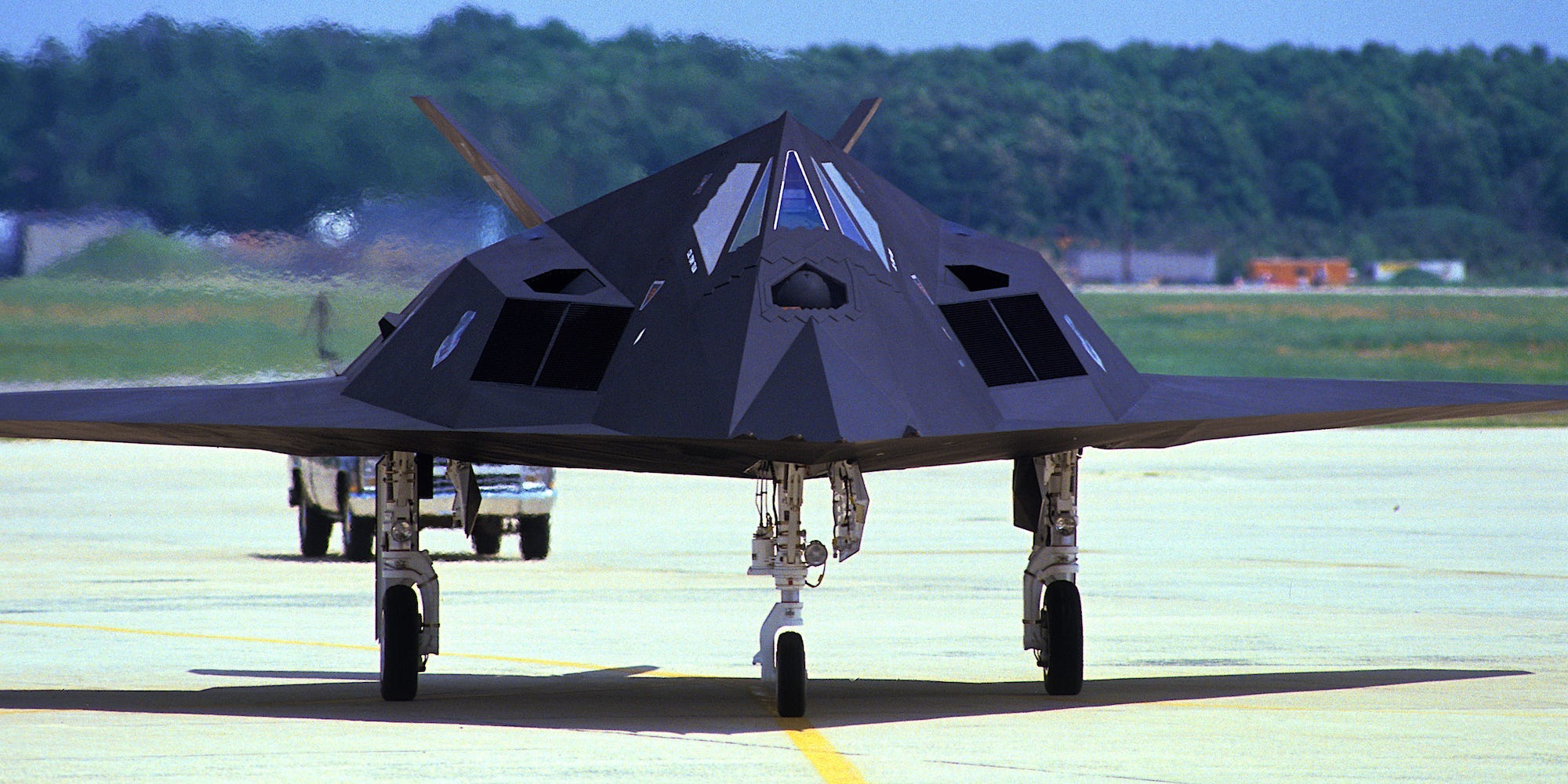 A F-117 in Virginia en route to Saudi Arabia for Operation Desert Shield in August 1990.

The fuss about the unveiling of the new B-21 stealth bomber has drawn the aviation world’s attention, but the B-21’s grandfather is still in action.

When it first flew in the early 1980s, the F-117 Nighthawk was the first operational stealth aircraft. The F-117 has been officially retired for about 15 years, but its retirement has been far from sedentary. The Nighthawk is still being used to train US pilots to counter enemy stealth planes and cruise missiles.

The US Air Force is now making plans to keep some of its Nighthawks flying until at least 2034. A US Air Force Request for Information published this past fall sought companies interested in a potential 10-year contract to provide maintenance for the F-117, beginning in 2024. 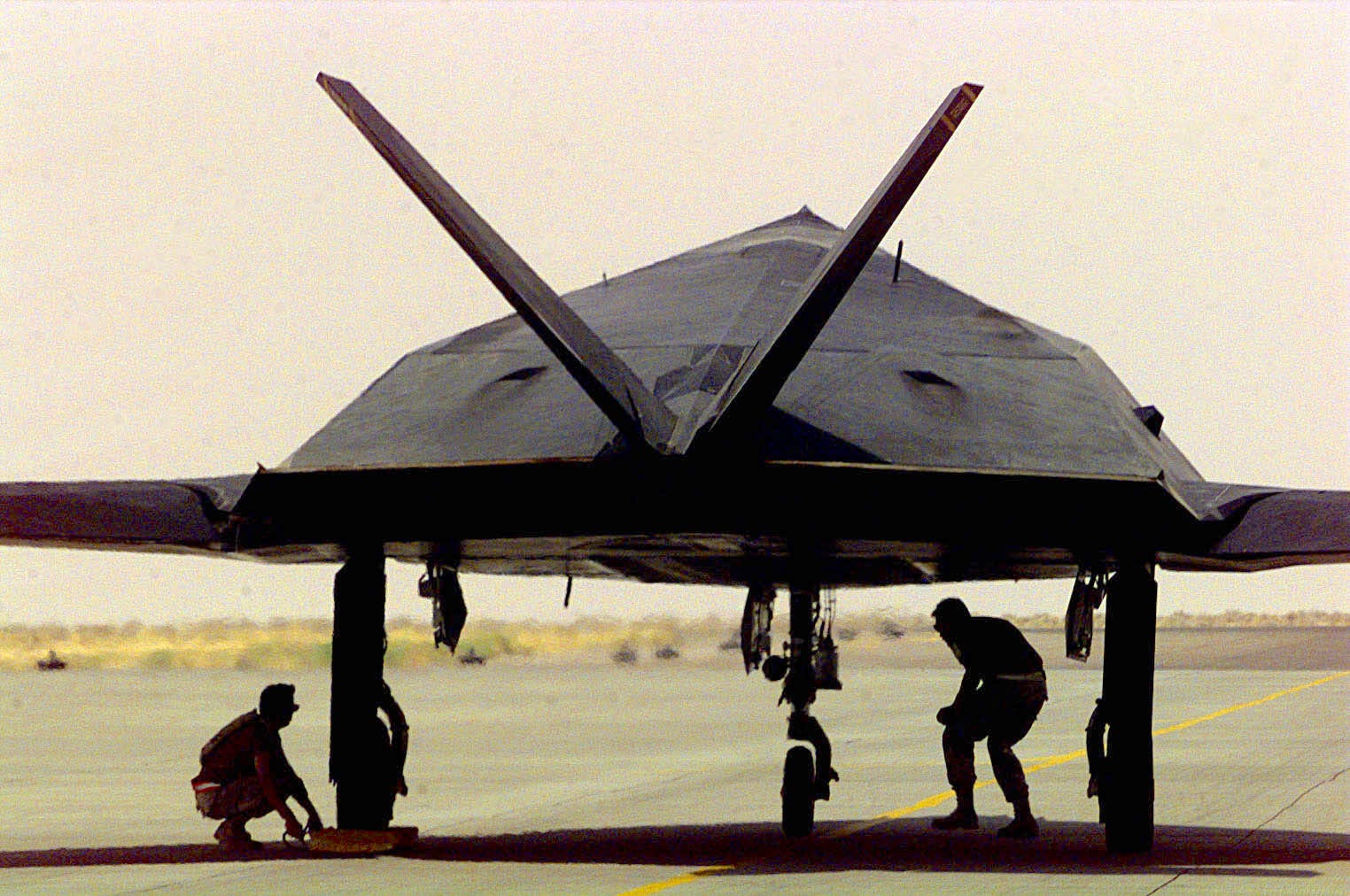 US Air Force via Getty Images

The RFI says the contractor will need to provide three services.

Tonopah — also designated Area 52 — is a highly classified site about 150 miles northwest of Las Vegas. Among the more interesting activities there are tests of nuclear weapon systems and experiments with Russian MiGs, anti-aircraft missiles, and other foreign equipment.

Tonopah was also the original home of the F-117 and its operators, the former 4450th Tactical Group.

The Air Force is also looking for companies to maintain F-117s in extended storage and to demilitarize and declassify surplus F-117s for buyers such as museums. “Anticipated demilitarization/declassification rate expected is a 2-3 aircraft per year,” the RFI says. 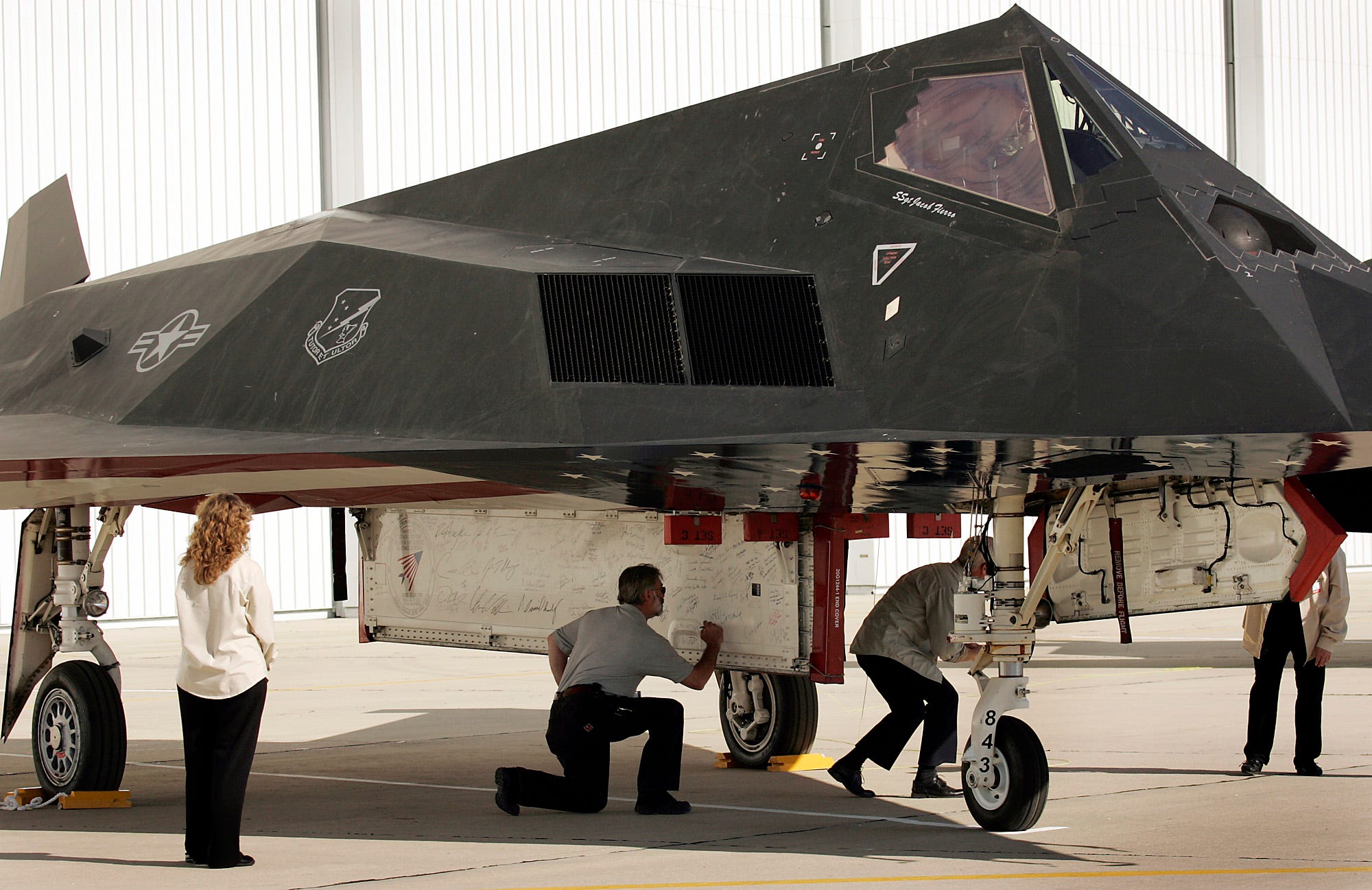 Employees and retirees who worked on the F-117 at the plane’s retirement ceremony in Palmdale, California on April 22, 2008.

The Air Force currently has about 45 F-117s, more than 10 of which have been approved for transfer to museums, Air Force spokeswoman Ann Stefanek told Insider.

“As we demilitarize the aircraft, they will be made available to museums, if requested, or be disposed of,” Stefanek said.

Out of service, but still in flight 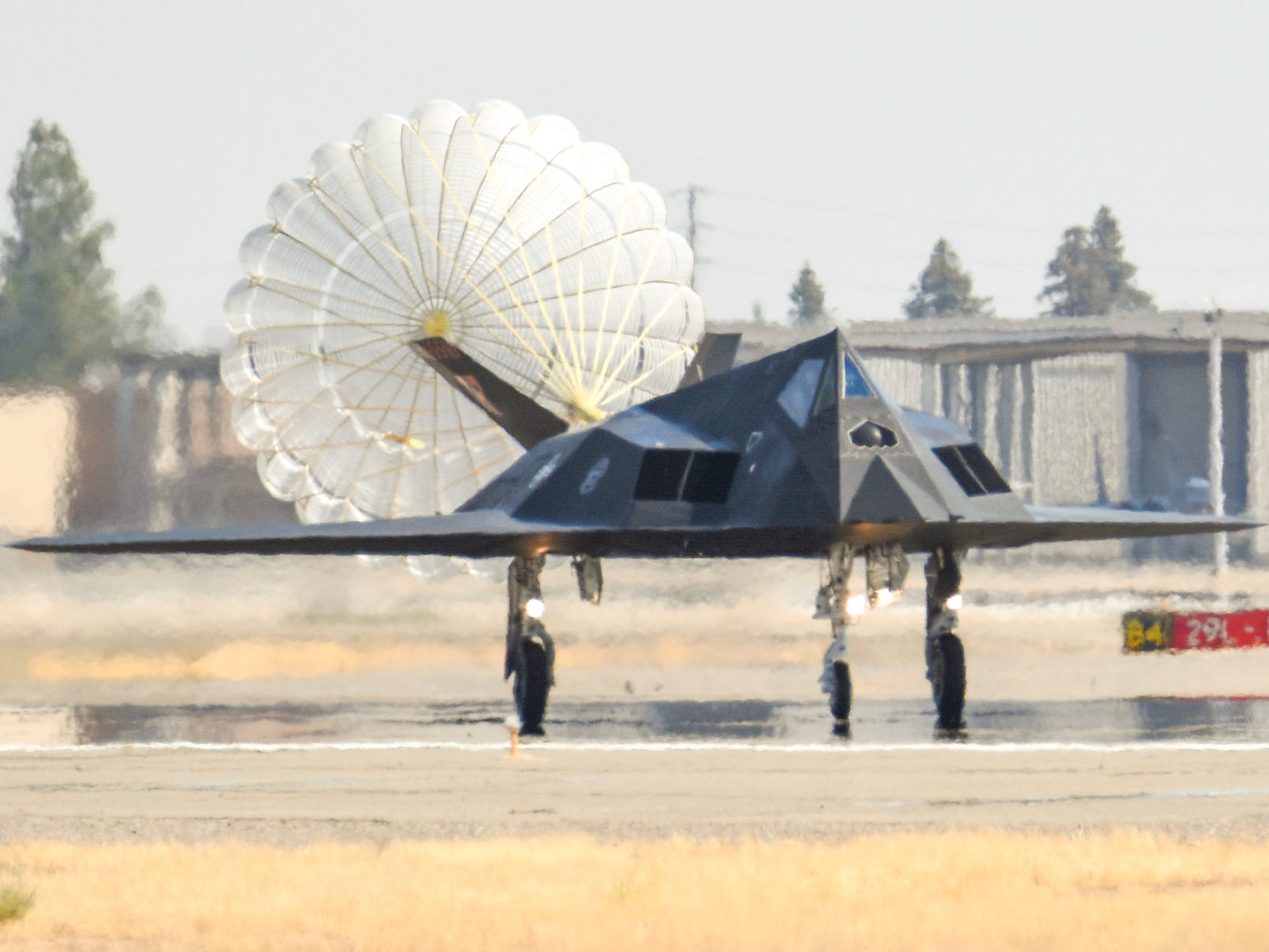 The F-117 was developed during the 1970s as a solution to increasingly lethal air defenses. Designed by Lockheed Martin’s famed and highly secretive “Skunk Works,” the Nighthawk used an angled shape and special coatings to minimize its radar signature.

As the world’s first stealth warplane, the F-117 has always had an air of myth around it.

Viewed solely as a subsonic bomber that could carry just two 2,000-pound laser-guided bombs in an internal bomb bay, its performance was not particularly spectacular. But while stealth is almost taken for granted nowadays, it was a big deal when the F-117 made its first flight in 1981.

The aircraft achieved a kind of cult status, including reports that it was linked to the well known — and totally fictional — F-19 stealth fighter.

The F-117 flew in the Gulf War in 1991, where its secrecy and mystique generated yet more buzz. In 1999, the Nighthawk achieved another milestone: It became the first stealth aircraft shot down in combat. 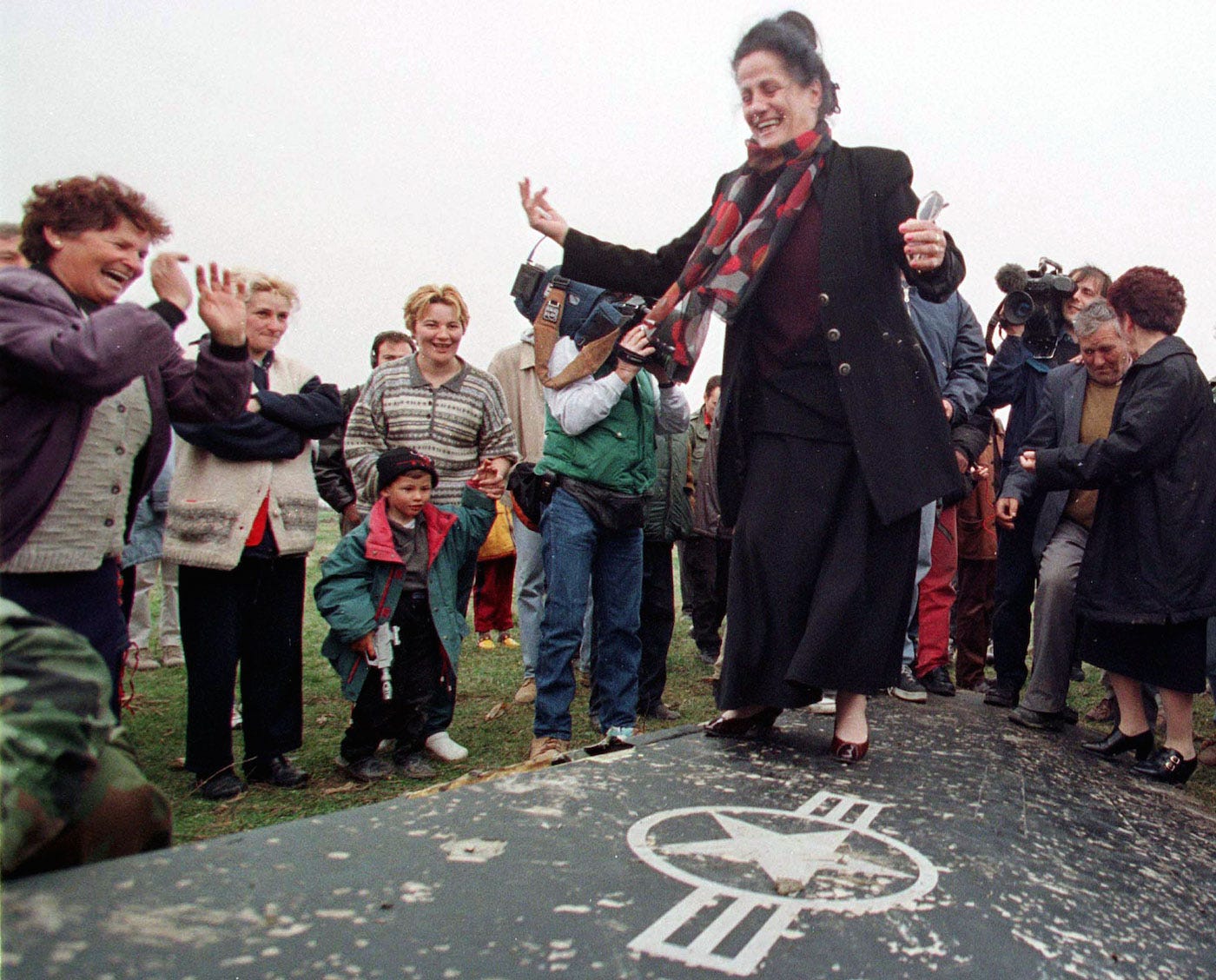 Clever Serbian gunners took advantage of a peculiarity of the F-117 — its bomb-bay doors reflected radar when they were open — to hit a Nighthawk with a surface-to-air-missile. The US pilot ejected from the burning F-117 and spent eight hours on the ground before being rescued.

Only 59 F-117s were built, plus five prototypes. Because it was an early stealth design with stiff maintenance requirements, the Air Force decided to retire the plane as a new generation of stealth aircraft — the F-22 and F-35 fighters and the B-2 bomber — emerged. But there is still life in the old Nighthawk.

It has occasionally been seen training with newer aircraft, including with Marine Corps F-35Bs off the California coast in April and with fourth- and fifth-generation jets over Georgia in May.

Even more intriguing are reports that the F-117 is being used to simulate cruise missiles for missile-defense training. It’s strange for the world’s first stealth aircraft to end up as a fake missile, but for an aircraft with such a colorful history, it seems appropriate.

Michael Peck is a defense writer whose work has appeared in Forbes, Defense News, Foreign Policy magazine, and other publications. He holds a master’s in political science. Follow him on Twitter and LinkedIn.

Home » Audio Sources - Full Text Articles » 15 years after ‘officially’ retiring its first stealth jet, the US Air Force is looking for help to keep the F-117 flying for another decade
a