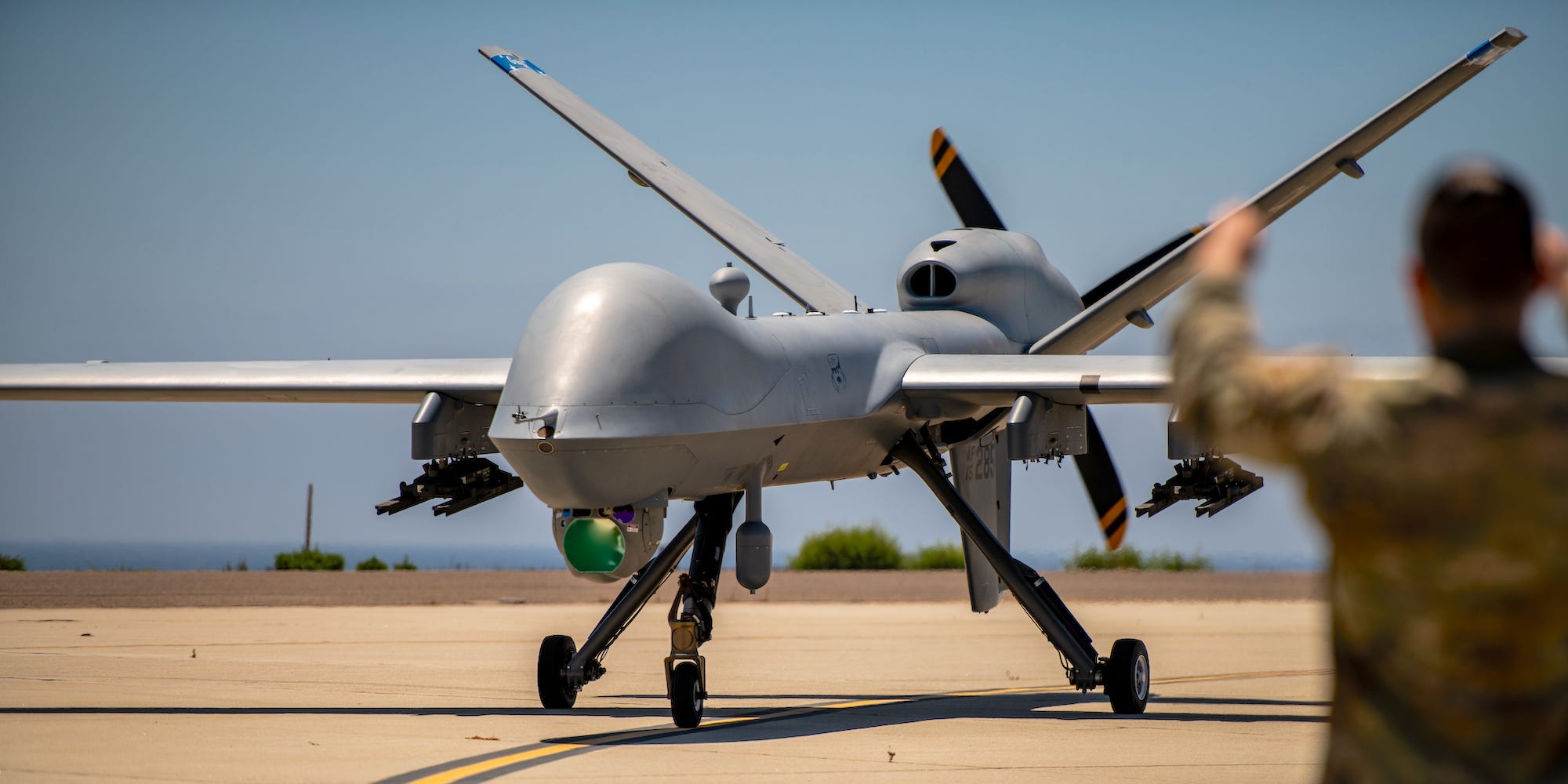 The deployment came amid Russia’s ongoing attack on Ukraine, which has raised tensions throughout Europe, but the drones also arrived in Greece as that country and Turkey, both of which are NATO allies, wage a war of words over their longstanding territorial and political rivalries.

Their dispute has raised a new challenge for the US and for its NATO allies, as their leaders try to maintain the alliance’s support for Ukraine and manage a new period of conflict with Russia.

Predator in the skies 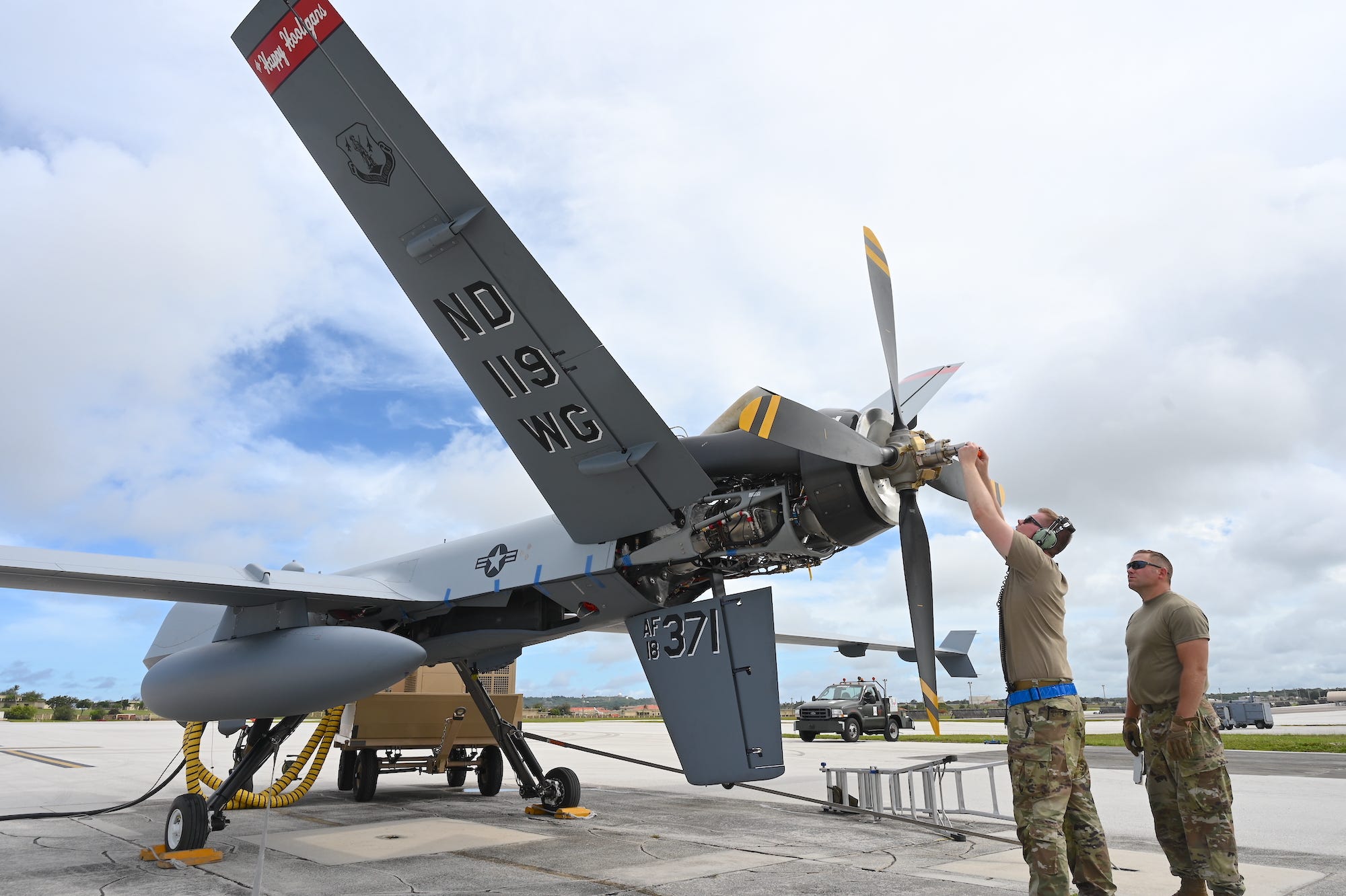 US Air Force airmen do pre-flight checks on an MQ-9 at Andersen Air Force Base in Guam in May.

For security reasons, the US Air Force did not disclosed how many Reapers were deployed to the base, but local media has reported eight drones are now operating there.

The Reaper, which can be piloted remotely or fly autonomously, has a maximum endurance of 27 hours and can reach altitudes of 50,000 feet. The drone has “a unique capability” to perform strike missions, gather information, and track “high value” targets, the US Air Force says, and it played a prominent role in the war in Afghanistan.

Larissa Air Base, located in central Greece near the Aegean Sea, “is a strategic location” and the base, which was recently upgraded to accommodate the Reapers, will allow the drones “to easily support both the eastern and southern flanks of NATO,” a spokesman for US Air Forces in Europe told Defense News. (Flight trackers have also reported a US-made RQ-4B Global Hawk landing at Larissa, suggesting the base can support even larger drones.)

The deployment was not in response to Russia’s invasion of Ukraine, the spokesman added, but their placement there “does support deterring and avoiding conflict with Russia.” 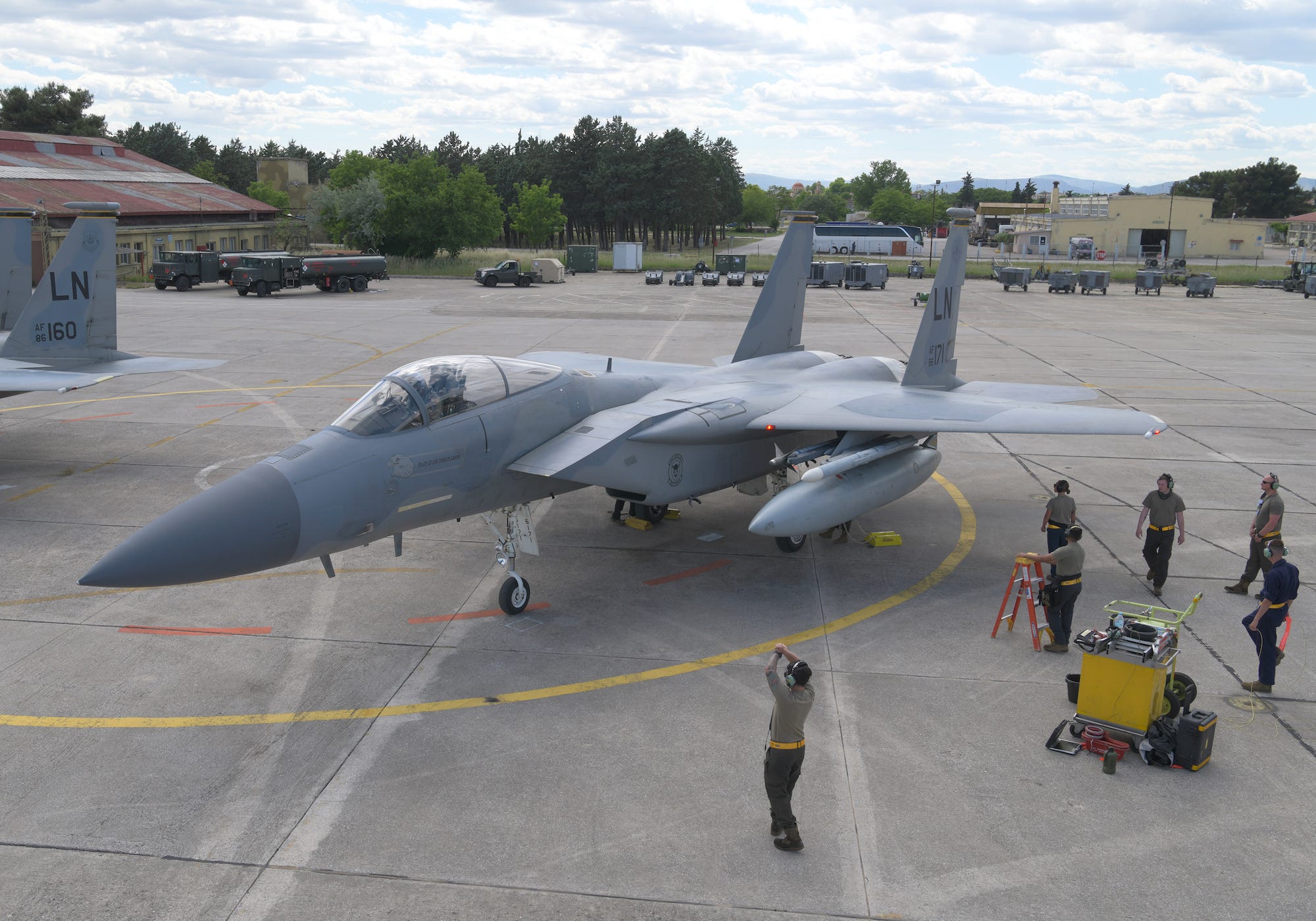 NATO has in recent years paid more attention to its southeastern frontier, where it borders conflicts in the Middle East and increasingly contentious activity in the Eastern Mediterranean Sea. Since Russia attacked Ukraine in February 2022, the alliance has also heightened its attention on its eastern flank.

Both trends have raised Greece’s profile, especially for the US.

Supplies meant for Ukraine are often unloaded at the Greek port of Alexandroupolis and sent via rail through Bulgaria and Romania. The same network supports US deployments to the Black Sea region.

The US presence in the region has also increased considerably, with numerous US-Greek exercises, more shipments of US troops and equipment through Greece, and the deployment of more US assets to Greek bases.

The Reaper deployment and increased US-Greek military cooperation are made possible by an updated comprehensive defense agreement signed in October 2021, which also includes a mutual defense clause. 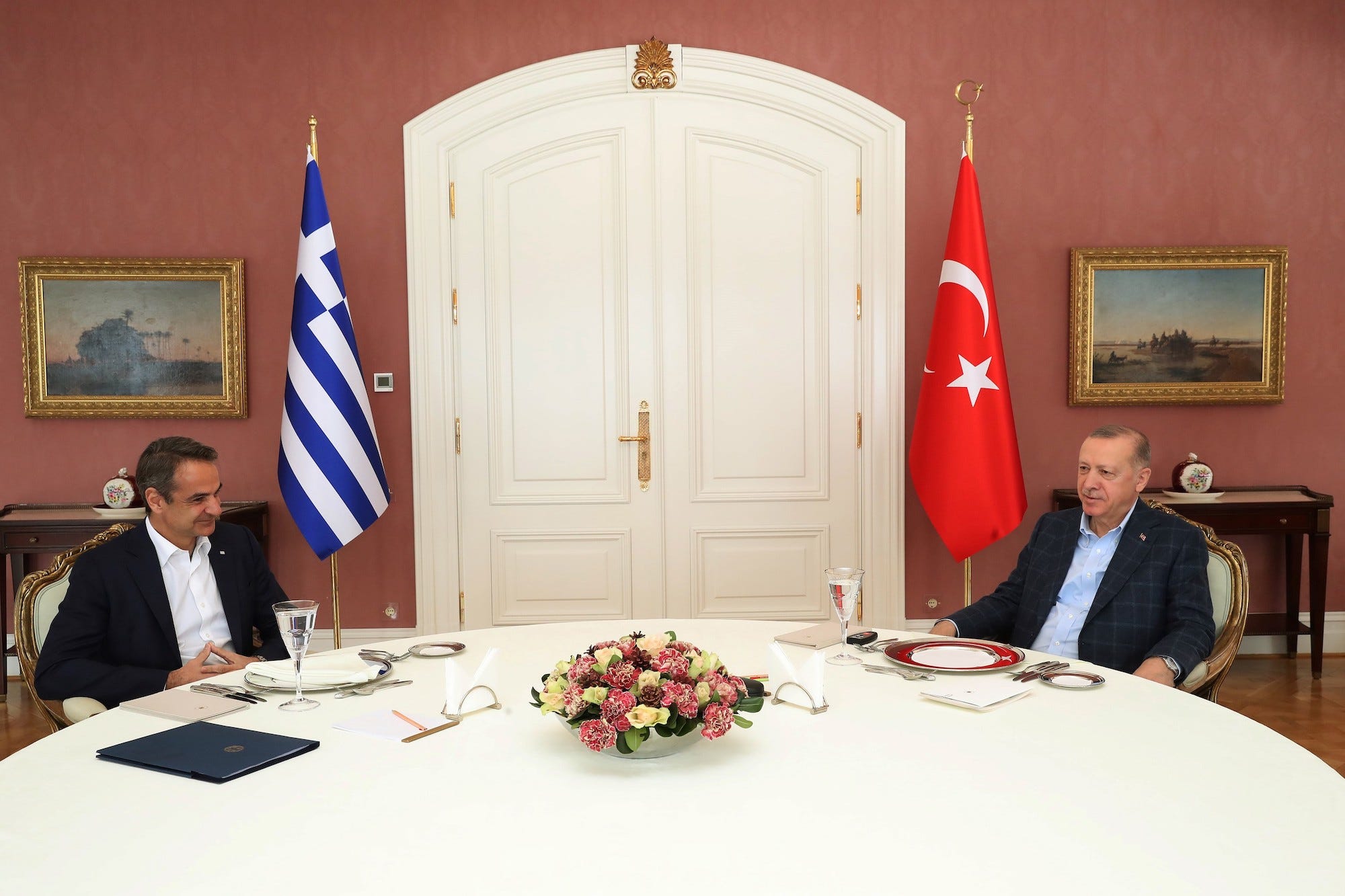 The US’s enhanced presence in Greece comes at a time of heightened tensions between Greece and Turkey, which have roiled the alliance and frustrated the US in particular.

Greece and Turkey clash over a number of issues, including the ethnically divided island of Cyprus, maritime delineation zones, and energy exploitation rights in the Aegean and Eastern Mediterranean.

They have come close to war numerous times in recent decades, and current tensions have increased after Turkey called into question Greece’s sovereignty over islands in the Eastern Aegean. Turkish President Recep Tayyip Erdogan has even threatened to attack Greece. The verbal sparring has raised concerns about the first open conflict between members of NATO.

Turkey, whose relationship with the US has deteriorated over a number of issues, has also been critical of the US-Greece relationship, particularly of their expanding military exchanges.

“The American military bases in Greece are so many that they cannot be counted,” Erdogan said a month after the US and Greece signed their updated cooperation agreement, adding that, “Greece has practically become an outpost of America.” 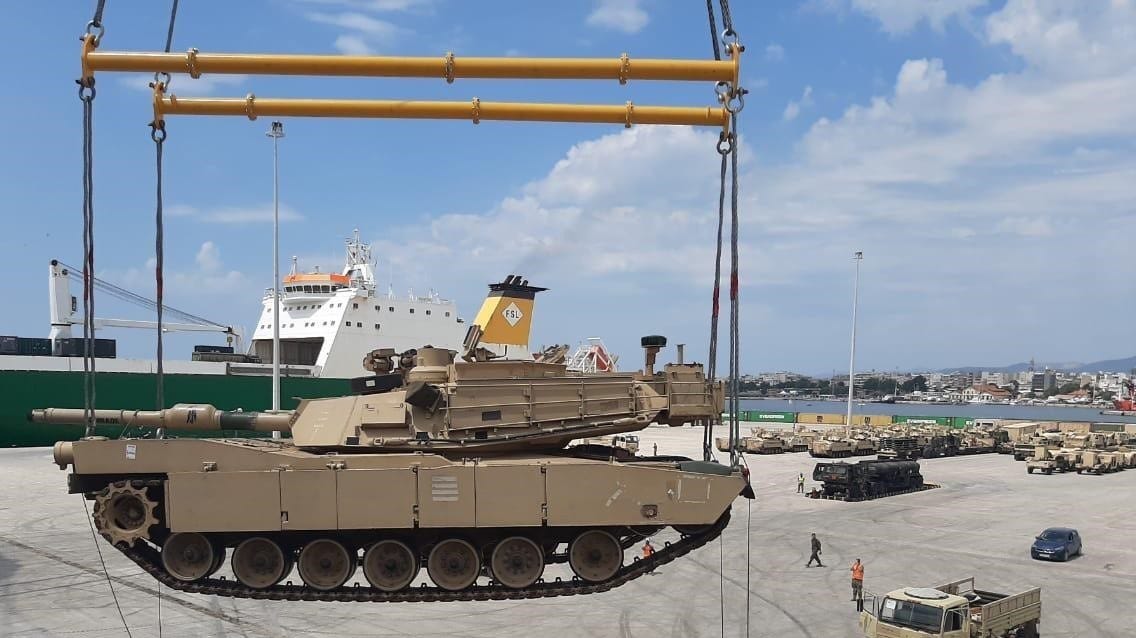 A US Army M1A2 tank is unloaded in Alexandroupolis in July 2021.

Turkish public opinion toward the US is also affected by American deployments to Greece, Ioannis Grigoriadis, an associate professor at Turkey’s Bilkent University, told Insider.

“Amidst discussions about a ‘truly independent’ Turkish foreign and security policy, such developments can further reinforce an anti-American sentiment that has struck roots in Turkish public opinion in the last 20 years,” Grigoriadis said.

Greece and Turkey will both hold national elections in the spring, leading some to see their statements as electoral posturing. Efforts to defuse the situation are underway, according to Greek reports.

The US had tried to remain neutral in Greece and Turkey’s disputes and intervened on occasion to prevent a full-scale conflict, but now Washington faces a very difficult situation in trying to support Athens and manage tensions with Ankara, according to Ryan Gingeras, a professor at the Naval Postgraduate School.

“For Washington, maintaining peace may come down to two unfavorable choices,” Gingeras wrote this month. The US could pressure Greece to “cede aspects of its sovereignty” and even abandon their mutual defense cooperation agreement, or the US could act as the “de facto guarantor” of Greece’s sovereignty, which could entail planning for a conflict with Turkey — and raise questions about the integrity of NATO.

Constantine Atlamazoglou works on transatlantic and European security. He holds a master’s degree in security studies and European affairs from the Fletcher School of Law and Diplomacy. You can contact him on LinkedIn.

Home » Audio Sources - Full Text Articles » As fighting rages in Ukraine, the US is sending drones to keep an eye on another tense corner of Europe
a