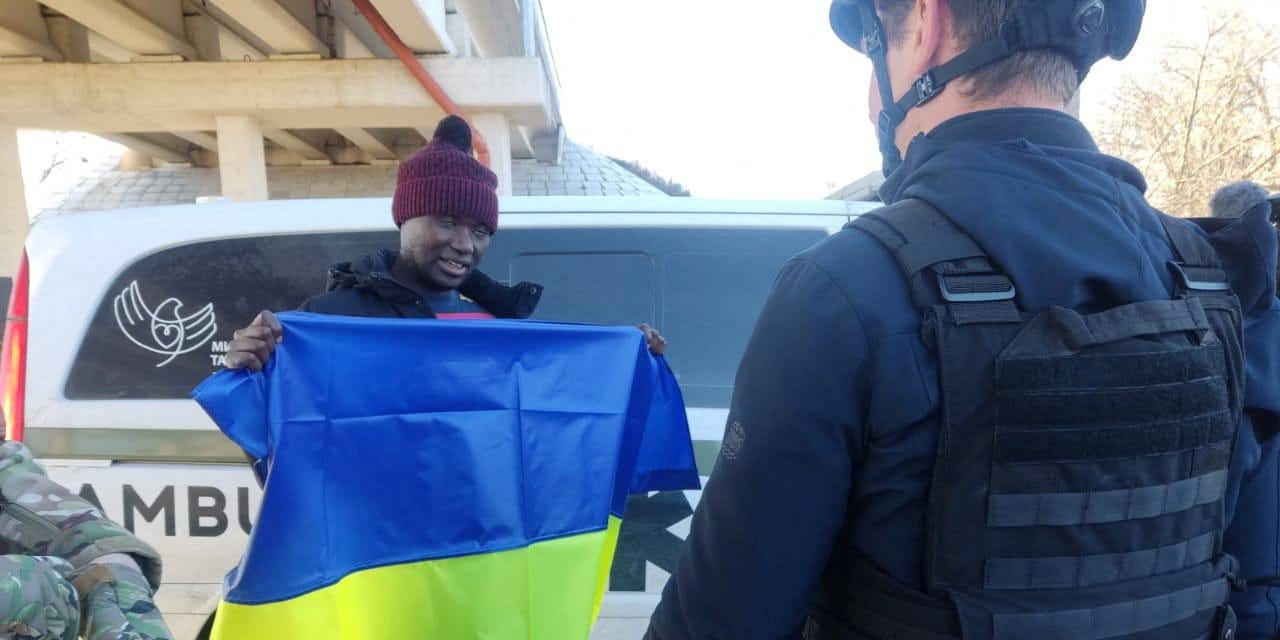 U.S. citizen Suedi Murekezi holds a Ukrainian national flag after a prisoners-of-war (POWs) swap, amid Russia’s attack on Ukraine, in an unknown location, Ukraine, in this handout picture released December 14, 2022.

A US citizen was among the dozens of Russian and Ukrainian prisoners freed in an organized swap on Wednesday, Ukrainian officials said.

Suedi Murekezi, an American Air Force veteran and native of Rwanda, spent months in Russian-controlled territory after being detained in June. Prior to his arrest, Murekezi had been living in Ukraine since 2018, working in the technology sector in the southern Kherson region, his family told The Washington Post this week.

Murekezi’s brother, Sele Murekezi, told The Post that his sibling immigrated to the US when he was a teenager and served in the Air Force for eight years before moving to Ukraine and settling in the Kherson area.

He chose not to leave the country when Russia invaded in February, the outlet reported, and Kherson was the first major city to fall to Russian forces less than a week after the war began. Ukrainian forces have since recaptured the region.

Murekezi, who is not believed to have been part of the fighting, told ABC News on Wednesday that the Russians accused him of being a member of the CIA and taking part in pro-Ukrainian demonstrations. He said the Russians kept him in a basement for weeks in the southern Kherson region, which he described as a “torture chamber.”

He told the outlet that he was then moved closer to the Russian border where he was held in prison in the Donetsk People’s Republic for three months. Russian separatists have controlled the Ukrainian regions of Donetsk and Luhansk, known as the Donbas, for eight years.

There, Murekezi met other Russian prisoners from the West, including two Americans who volunteered to fight on behalf of Ukraine. The two men, Alex Drueke and Andy Tai Huynh, were released in a September prisoner swap and described horrendous conditions during their time in captivity.

Murekezi, who was not included in the September swap, told ABC that he was shocked and beaten by his captors. He was later released by the Russians, but did not have access to his US passport, which left him essentially stranded in the separatist-controlled regions, he told the outlet, saying he felt “trapped.

While detained with his fellow American prisoners, Murekezi said the Russians gave them minimal food and water. He told ABC that he was most looking forward to a peanut butter sandwich upon his return home.

Murekezi’s brother told the Post he believes his brother will return to the United States after his ordeal. He previously lived in Minnesota.

Andriy Yermak, the head of Ukraine’s presidential office, said in a Wednesday tweet that 64 Ukrainian soldiers were also included in the prisoner exchange, as well as the bodies of four soldiers killed in action.