On a drizzly December evening in Washington, D.C., Kimberly Mata-Rubio marched silently from Union Station to Capitol Hill with dozens of other families from Uvalde, Texas. Her 10-year-old daughter Lexi Rubio was murdered in the shooting at Robb Elementary School on May 24. Mata-Rubio had never been on a plane prior to the shooting, but this was now her seventh trip to Washington in as many months to pressure lawmakers to pass restrictions on assault weapons.

She carried a sign reading, “Assault weapons took my daughter, Lexi.” When the march ended in front of the Capitol building, Mata-Rubio, 33, was weeping.

This is not the vocation that Mata-Rubio envisioned for herself, but it is now her future. While she’s taking on the legislative battles, she is also navigating her complicated and painful grief. She is mourning the loss of her daughter—but also the loss of the life she and her family had before the shooting. “Who I was before ceased to exist the moment Lexi died,” Mata-Rubio says, sitting on a bench outside the U.S. Capitol on Dec. 8 in between meetings with lawmakers. “This new me, it’s difficult figuring it out.” 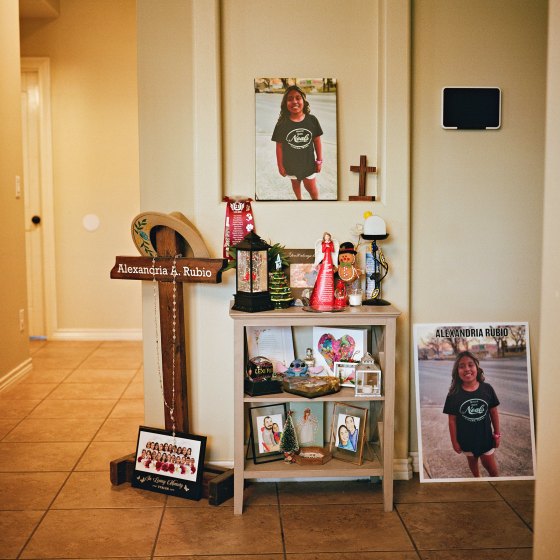 Christopher Lee for TIMEA memorial for Lexi in her parents’ home in Uvlade.

As mass shootings in the U.S. become increasingly common—there have been more than 400 in the U.S. since the tragedy in Uvalde on May 24, according to the Gun Violence Archive—she says it should be clear that her anguish could become any other parent’s, as well. “I would receive comments, something along the lines of, ‘I can’t imagine what you’re going through,’” she says. “And I’m like, well, no. As a mom or a dad, you can imagine… Only when you imagine my pain will you join me in fighting.”

Christmas Eve marks seven months since Lexi and 18 other children and two teachers were killed by a gunman. Normally, Lexi would help her father, Felix Rubio, decorate the outside of their home for the holidays. They’d drink hot chocolate with marshmallows and watch Christmas movies together. This year, the family decorated Lexi’s gravesite with Christmas lights and giant candy canes.

For decades, no mass shooting produced meaningful changes to gun law on Capitol Hill. Dec. 14 was the 10-year anniversary of a gunman killing 20 children and six adults at the Sandy Hook Elementary School in Newtown, Conn., an event that many lawmakers and advocates thought would lead to federal changes to gun policy, which never panned out. But Uvalde was different: President Joe Biden in June signed the most significant gun reform bill in nearly three decades into law, which enhances background checks for young gun buyers and funds mental health programs. 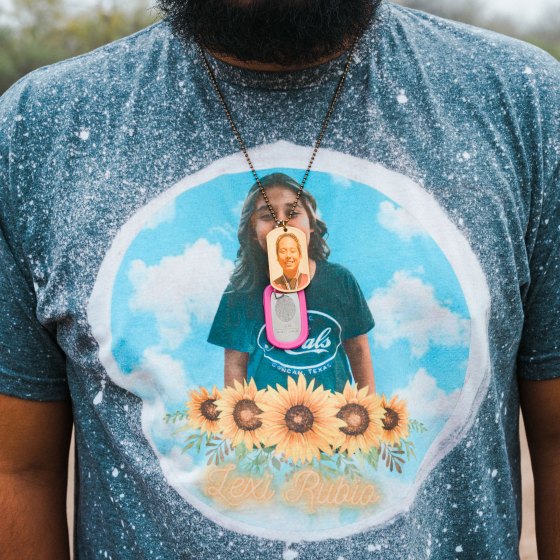 Christopher Lee for TIMEFelix Rubio, the father of Lexi Rubio, wears a shirt that memorializes his daughter.

Still, that law might not have prevented the Uvalde shooter from acquiring his weapon. Mata-Rubio says it isn’t enough. Like many parents of mass shooting victims, she is learning not only that the pain of losing a child doesn’t end, but that those in power are often slow—or even entirely unwilling—to change U.S. gun laws. Mata-Rubio has become a public figure, testifying before Congress, speaking directly with lawmakers, participating in rallies in Austin, and sharing her heartbreak with her nearly 19,000 followers on Twitter to try to spur national change.

During her December trip to D.C., she urged the Senate to pass a bill that would reinstate a ban on certain assault weapons like the one used in the Uvalde shooting and others. (The House passed the bill in July.) But it’s unlikely that Senate leadership will bring the bill to a vote before Republicans take control of the House on Jan. 3—all but sinking any possibility of that legislation passing.

“It’s been a rough two weeks,” Mata-Rubio tells TIME in an interview a few days after the march in D.C. She committed to the Washington trip prior to Thanksgiving, but since the holiday, her mourning took a new form. “Those traditions that we usually do, we’re not doing, and [Lexi’s] not here… Had I been in the headspace I’m in right now, I probably wouldn’t have [decided to come].” 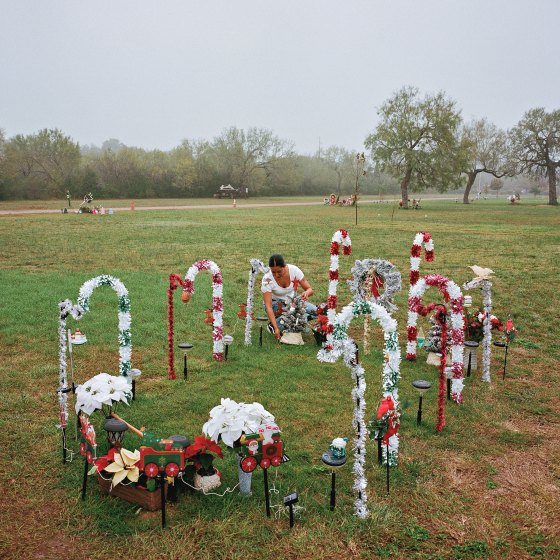 Christopher Lee for TIMEKimberly visits Lexi’s gravesite, which they decorated for the holidays.

Less than one week after her D.C. trip, Mata-Rubio walked across the stage in a cap and gown at the St. Mary’s University commencement ceremony to receive her Bachelor’s degree in History. She was wearing a necklace with the letter “A.” Lexi’s full name was Alexandria Aniyah Rubio. Her family cheered for her from the audience, and an extra large photo of Lexi filled one of the seats.

It was an emotional experience, Mata-Rubio says. She and her husband—a former patrol deputy with the Uvalde County Sheriff’s Office—had wanted to move Lexi and her five siblings out of Texas. Mata-Rubio used to work as a reporter at the Uvalde Leader-News, a local twice-weekly newspaper. But she only had a high school diploma, and in 2019, she decided to quit and get her Bachelor’s degree, which she hoped would help get her a job at the FBI, or open up other opportunities in journalism outside of Texas. “I almost would have taken anything,” she says. “Whatever, just to get my kids out of Uvalde, experience something different. It was important to me.”

The family was thinking of moving to Washington State, or some place cold—Lexi liked cold weather. They believed Mata-Rubio’s college degree would be their ticket out. “That was what we were waiting for to leave,” she says. “So I was almost right there. Just too late.”

Now, Mata-Rubio will never leave Uvalde. “Lexi is there,” she says. 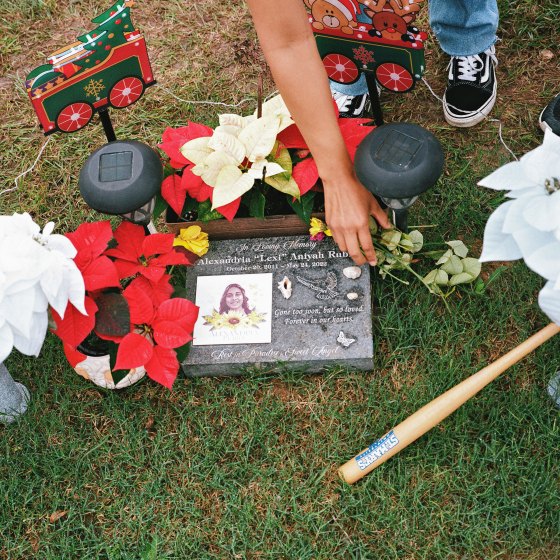 Mata-Rubio first testified about gun violence just three days before Lexi was buried. “[Lexi] was firm, direct, voice unwavering,” Mata-Rubio said in her testimony before the House Oversight Committee, her own voice shaking but forceful. “So today we stand for Lexi and as her voice we demand action.”

Mata-Rubio has already seen more changes enacted since losing her daughter than many other parents of school shooting victims. Her push for strengthened background checks became law in June. Now her focus has turned to passing an assault weapons ban.

Mata-Rubio won’t comment on the ongoing investigation into the events that unfolded at Robb Elementary School, but says, “If 300-plus officers felt outgunned by one person with an assault weapon, then the average citizen shouldn’t have access to that type of weapon.” 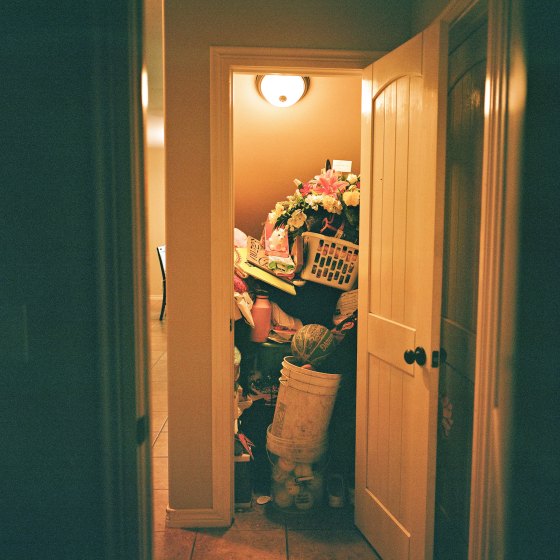 Christopher Lee for TIMEA closet in Kimberly and Felix’s home where they store many of Lexi’s belongings. Lexi had the pink water bottle with her at school on the day of the shooting.

Some of the opposition to the reforms Mata-Rubio wants is coming from her own elected representatives. On Dec. 8, shortly after speaking with TIME, Mata-Rubio and her husband met with a staffer for Sen. John Cornyn, a Republican from Texas. According to Mata-Rubio, the staffer told her the office would not do anything to persuade Senate leadership to bring a bill banning assault weapons to a vote before the end of the year. (Cornyn’s office confirmed the meeting to TIME but declined to comment on what was discussed.)

After her trip to Washington, Mata-Rubio returned to Uvalde to figure out what to do next and bear the pain of her first Christmas without Lexi. She wants to return to work at the Leader-News, but her first priority is her activism. With the new Congress next year there will be a renewed fight for gun safety legislation, a new balance of power in Washington, and new lawmakers to confront with her grief.

In the meantime, Mata-Rubio and her family visit Lexi’s grave every day. “We’re trying to get there earlier these days though, because it gets darker sooner,” Mata-Rubio says, “and it’s hard to leave her in the dark.”

Home » Audio Sources - Full Text Articles » The First Christmas Without Lexi: A Uvalde Mother Mourns Her Daughter and Rages at Washington
a