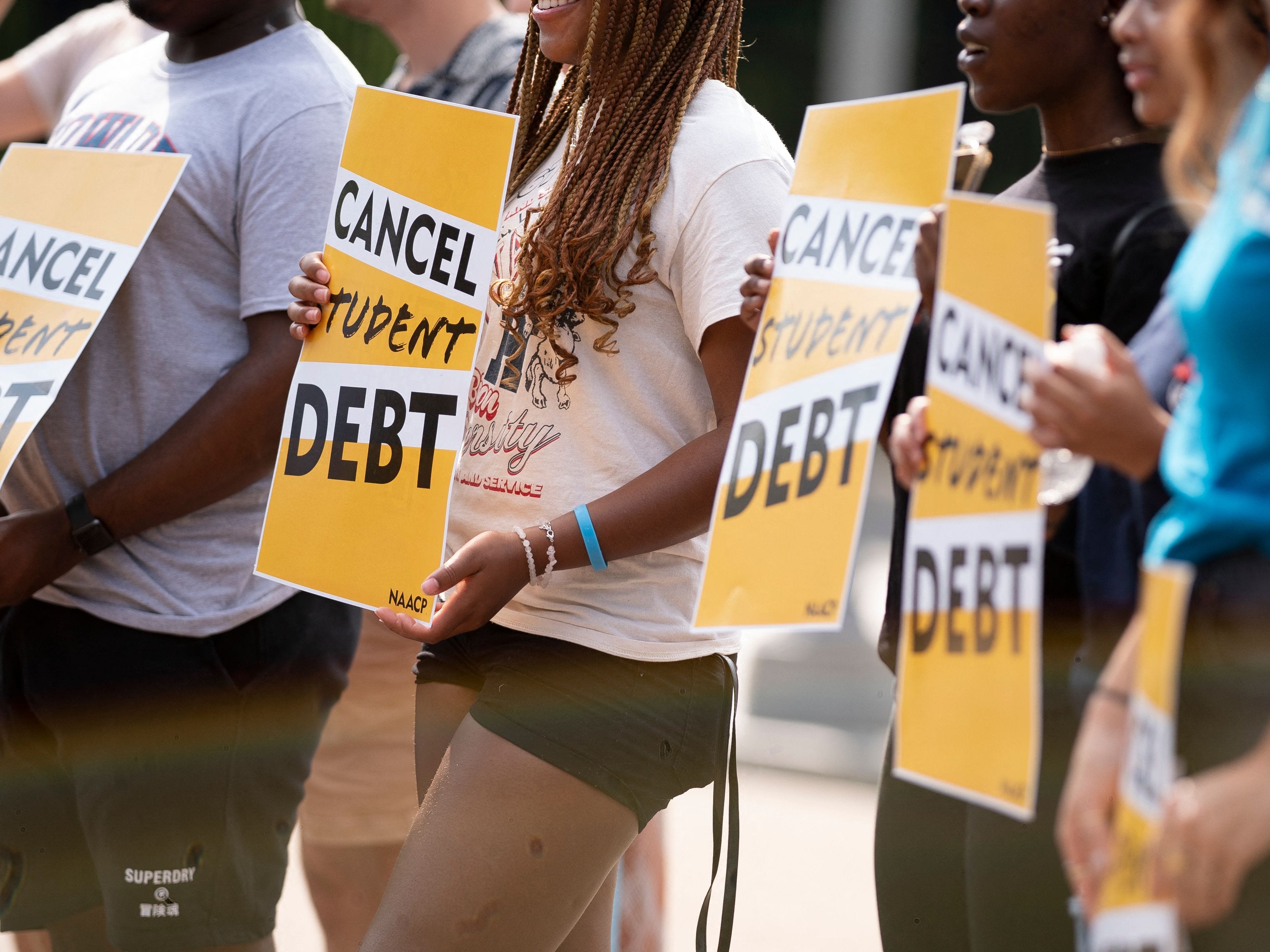 Activists hold cancel student debt signs as they gather to rally in front of the White House in Washington, DC, on August 25, 2022.

Student-loan borrowers have had quite the year in 2022 — and millions are confused about what it means for their finances in 2023.

In August, a moment millions of federal borrowers had been waiting years for finally arrived when President Joe Biden announced $20,000 in student-debt cancellation for Pell Grant recipients making under $125,000 a year, and $10,000 in relief for other federal borrowers under the same income cap.

While the amount wasn’t as expansive as many might have been hoping for — some Democratic lawmakers were pushing the president to cancel $50,000 in student debt — it still marked a significant step toward providing long-awaited relief to millions of Americans.

“For too many people, student loan debt has hindered their ability to achieve their dreams—including buying a home, starting a business, or providing for their family,” Education Secretary Miguel Cardona said after the loan forgiveness was announced. “Getting an education should set us free; not strap us down!”

But the relief quickly ran into hurdles. Since the loan forgiveness had an income cap, the Education Department was unable to automatically cancel the debt and needed until October to make an online application available for borrowers. Conservative groups used that time to file lawsuits to block the relief, and Biden’s administration responding by further narrowing the eligibility for the relief to exclude some borrowers with privately-held loans to avoid litigation.

Still, just weeks after the application opened in early October, a ruling from the 8th Circuit Court of Appeals paused the process, barring the department from processing any new applications, and another ruling from a Texas judge later ruled the relief is illegal.

Right before Thanksgiving, Biden extended the student-loan payment pause through June 30 or whenever the lawsuits are resolved — whichever comes first — meaning the fate of the relief ultimately rests with the Supreme Court, who will begin hearing arguments on February 28. Until then, borrowers’ financial futures hang in the balance.

Here are some of their stories.

2 people whose entire student-debt loads will be wiped out due to Biden’s announcement talk about what’s next for their futures: ‘I get to not worry about losing my home’ 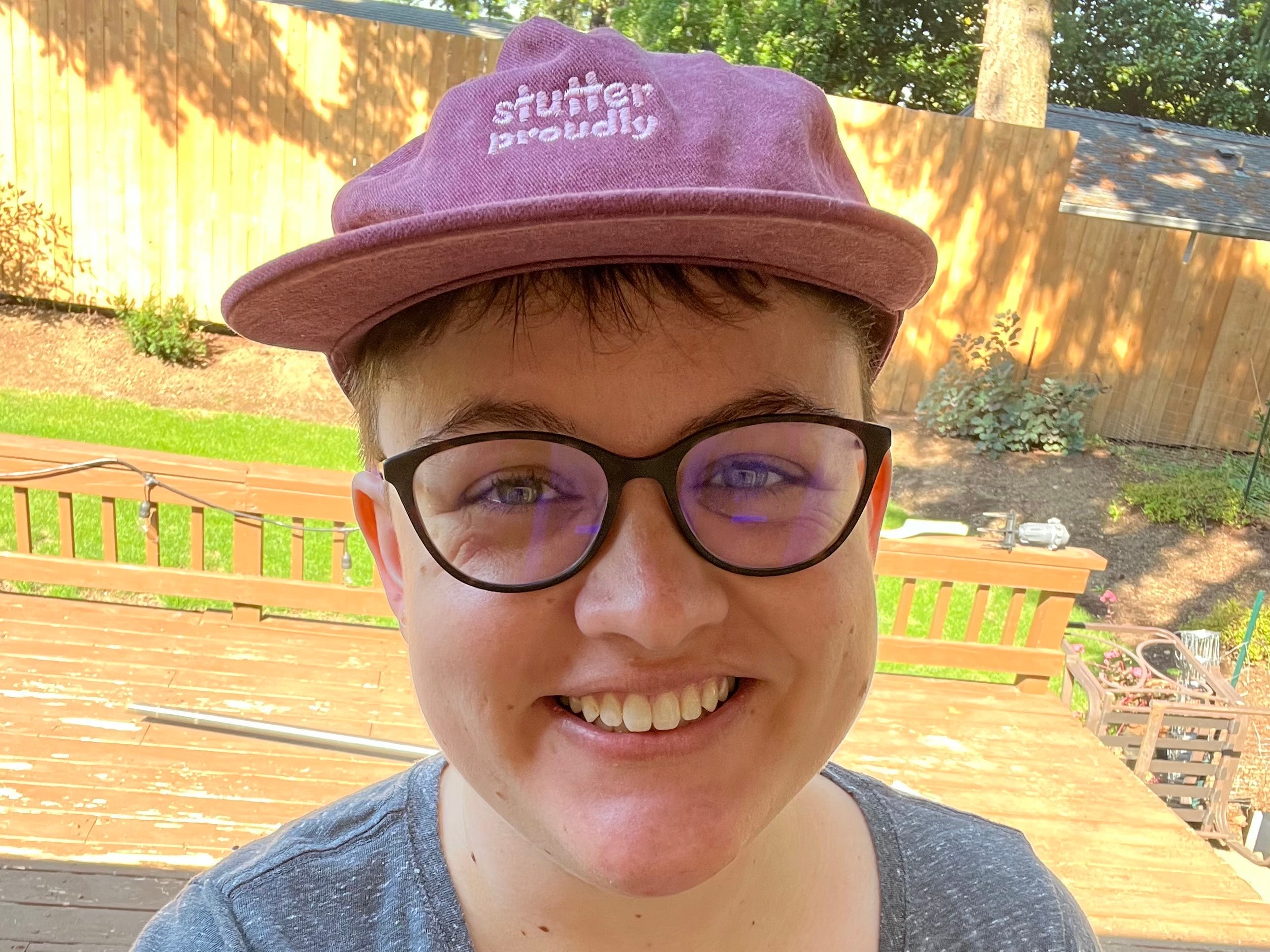 Prior to the relief, Horak had about $20,000 in student debt and worried about paying down their mortgage when payments resume. But as a Pell Grant recipient, when Horak learned they would get their entire student debt balance wiped out, they were ecstatic.

“When I saw the whole amount, the entire balance,  I was elated, relieved, and I felt like, wow, it’s kind of the first time I’ve ever felt directly impacted by something like a political order or passing of something,” Horak said.

Smith — another Pell Grant recipient — learned his entire $7,000 remaining balance would be forgiven as well, and not only was he excited for himself, but for millions of others whose lives “are going to transform.”

Meet a professor who qualifies for Biden’s student-loan forgiveness but still has years of repayment to go and feels ‘disheartened’ the relief wasn’t bigger: ‘There’s this looming sense of hopelessness’ 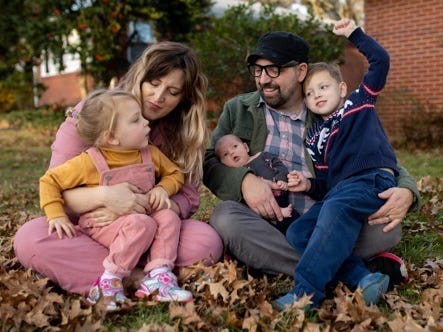 Nick Garcia, 42, with his wife and three children.

While $10,000 in debt cancellation would certainly make a dent in his $39,000 balance, the college professor recognized that he was still looking ahead at years of repayment and was disappointment Biden didn’t seize the opportunity to go even bigger with the relief.

“I feel disheartened because it shows that more can be done at the executive level,” Garcia said. “Although I’m glad to see action from Biden that will improve the lives of millions, I don’t know that it rises to the moment. It just doesn’t resolve our debt crisis.”

The student-loan payment pause, on the other hand, was instrumental for Garcia and his family, as it allowed them to save hundreds of dollars a month they put toward house repairs and paying down personal debts.

Still, with Biden framing this loan forgiveness as “one-time” relief, Garcia is concerned that “it sends a message that the fight is over.”

Meet a government worker who regrets refinancing her student debt because she didn’t know it would block her from federal loan forgiveness: ‘I never would have done that’ To qualify for Biden’s student-loan forgiveness, a borrower must have federal student loans. That shut Tanya Burnett, 57, out of the relief.

As a government worker, Burnett started her paperwork in 2016 to qualify for the Public Service Loan Forgiveness (PSLF) program, which forgives student debt for government and nonprofit workers after ten years of qualifying payments.

But when she submitted that paperwork, she was given the option to refinance her student loans with a monthly payment $200 less than what she had previously been paying — from $800 to $600 — which meant taking her federal loans to a private lender.

That seemed like a pretty good deal to her at the time, so she made that switch, but she was never told upfront that doing so would mean losing her federal benefits, like debt relief.

“I thought that lower monthly payment was great,” Burnett said. “But if I had known this would totally have taken me out of the federal, and there’s no connection at all regarding forgiveness, I never would have done that. It wasn’t worth it.” 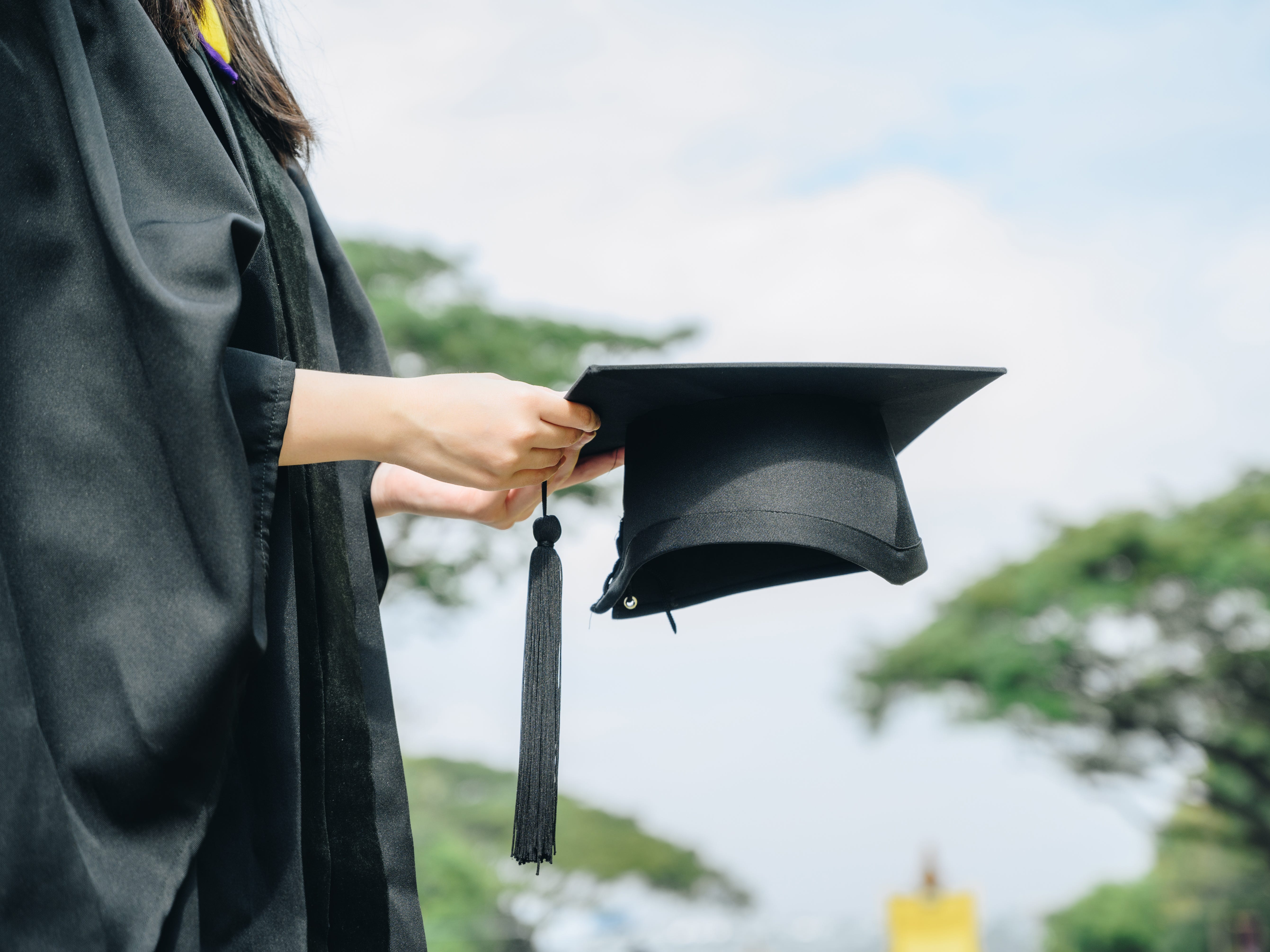 Student-loan companies have struggled to adjust to Biden’s new policies, and some borrowers have experienced the consequences.

Not only was student-loan company MOHELA tasked with implementing the debt relief, but it was also responsible for overseeing all borrowers enrolled in the Public Service Loan Forgiveness (PSLF) program.

Reforms to the program, like allowing past payments to count toward forgiveness progress, expired on October 31, and Nathan — a PSLF borrower — wanted MOHELA to confirm his payments were qualifying. It ended up being a lengthy ordeal.

“The first time I tried to call was a 144 minute estimated wait time,” Nathan, 29, said. “The second time I called was a 149 minute wait. And then most recently, I tried to call and it was 50 minutes. And each of these times I didn’t have time to wait. I thought it would be a quicker call. And one time I stayed on the call for nearly three hours.”

Kate, another PSLF borrower, said it became “virtually impossible” to get ahold of MOHELA to confirm her paperwork went through. The inability to reach the company has kept her and Nathan’s finances uncertain as debt relief loomed.

Meet a borrower with $43,000 in student debt who thought he was getting Biden’s loan forgiveness, only to have it ‘yanked away’ a month later 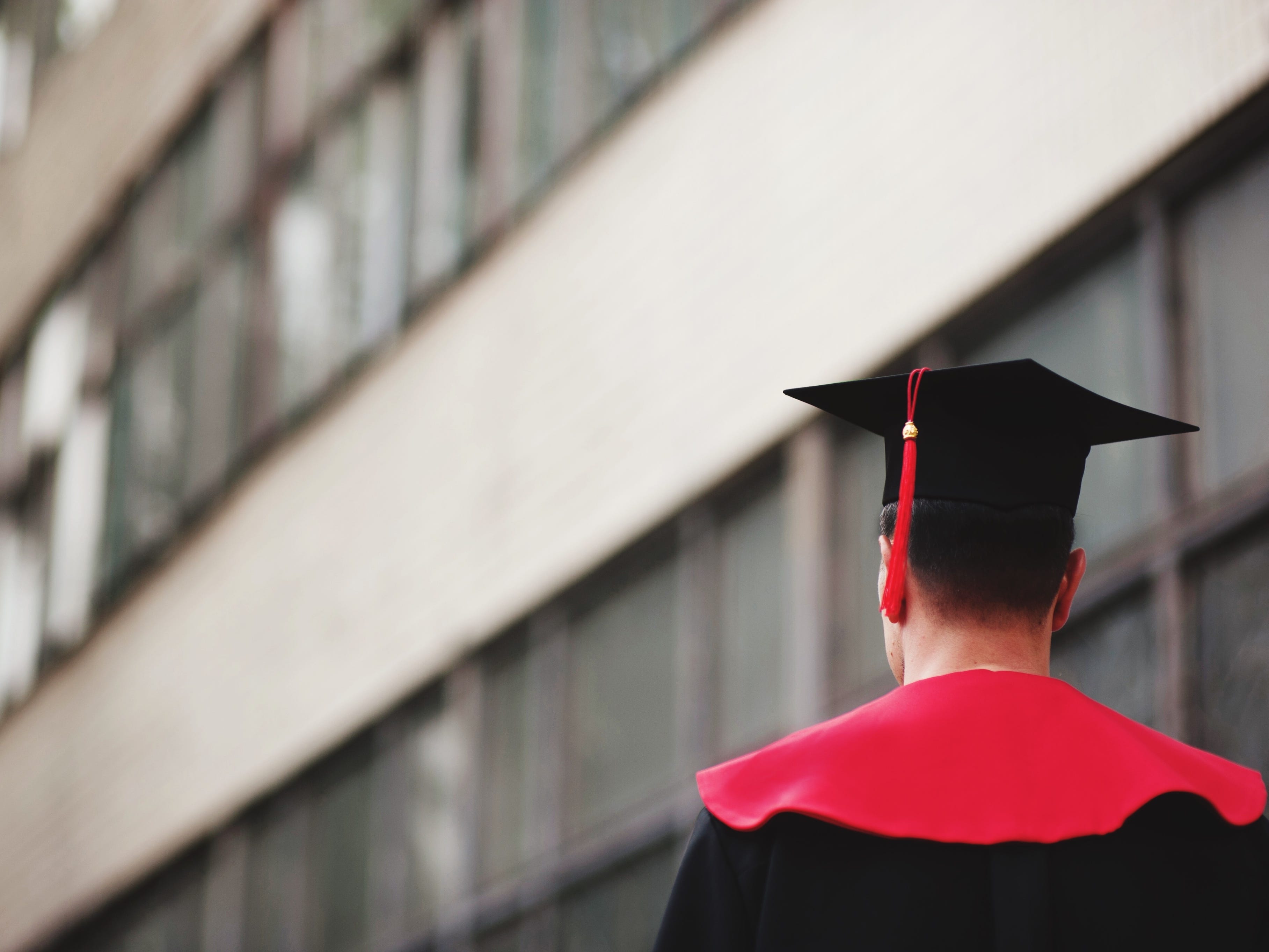 Kristopher Cabreira was “ecstatic” when Biden announced up to $20,000 in debt relief. But a decision the Education Department made on September 29 threw him for a loop.

Cabreira’s student loans are federal loans managed by private banks within the Federal Family Education Loan (FFEL) program. While borrowers with those loans initially had the option to consolidate their debt into the direct federal loan program, the September guidance stated that past that date, FFEL borrowers cannot consolidate, and therefore, will not be eligible for Biden’s one-time student-debt relief.

Biden’s administration made this decision in an attempt to avoid a lawsuit filed by six Republican-led states who argued the debt relief would hurt the banks who would’ve stood to profit from the FFEL program.

But for Cabreira, and the 770,000 other impacted borrowers, it was a gut punch.

A first-generation college student with $146,000 in student debt says blocking Biden’s relief ‘feels like a really sick game’: ‘It’s not the American dream that we were promised’ 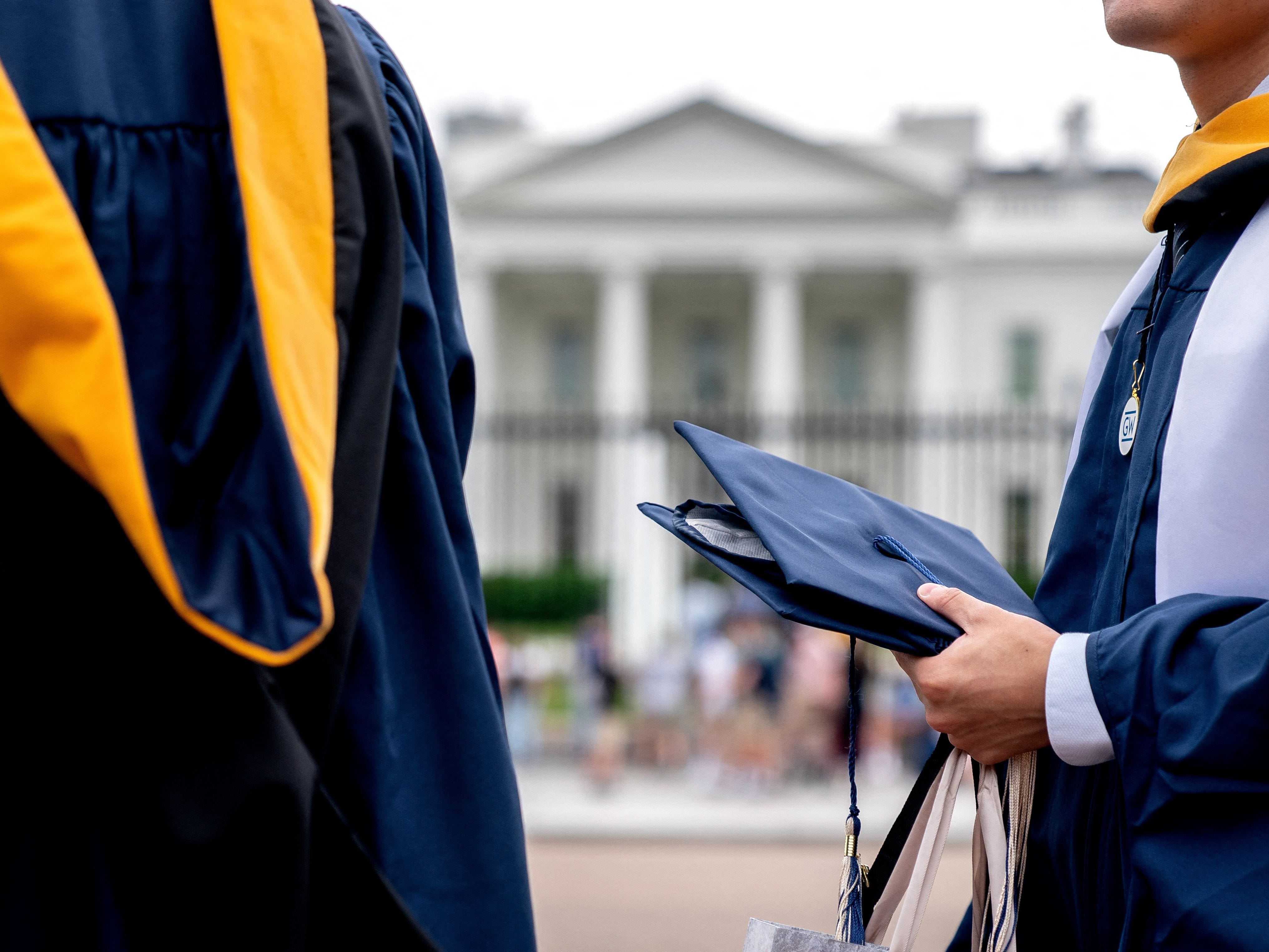 Students from George Washington University wear their graduation gowns outside of the White House in Washington, DC, on May 18, 2022

As a nonprofit worker on a five-figure salary, Lopes was looking forward to $10,000 in relief to help him progress on his repayment quicker and help his family out financially — especially because he said that after immigrating from Brazil to the US, he did not have the knowledge he needed to navigate the financial student-aid system, which is partly why his debt surged.

But the lawsuits that blocked the relief didn’t reflect “the American dream that we were promised coming over,” Lopes said.

“It’s more of the unknown, the uncertainty, it just feels like a really sick game,” he continued. “Are we going to get a pause? Are our payments coming back? It’s just all unnerving.”

Lopes said he has faith the debt relief will ultimately prevail, but he’s upset millions of Americans have been put in this position.

Meet a Republican who would have all $10,000 of his student loans canceled under Biden’s plan but thinks it’s an unfair policy Student-loan borrowers and the Too Much Talent Band thank President Joe Biden and Vice President Kamala Harris for extending the student loan pause and now demand that they cancel student debt at a gathering outside The White House on January 13, 2022.

Paul Morigi/Getty Images for We, The 45 Million

Matthew, a 28-year-old Republican, would see his entire student-debt balance wiped out under Biden’s plan. That doesn’t mean he agrees with the policy.

Since Biden announced the loan forgiveness, Matthew said he was skeptical it would ever come to fruition, and he wasn’t surprised once the lawsuits started to mount.

“My generation, the millennial, Gen Z generation, are facing a significant problem with student-loan debt,” he said. “I feel as though that the administration, through their strongest intent and their sincerest desires, were trying to help that generation with this policy. However, I personally believe it’s the wrong policy and was, quite frankly, an illegal policy.”

He, along with other conservative lawmakers, share the belief that canceling student debt is unfair to high earners and people who researched how their educations would pay off, and he said he’s worried for the people who were banking on forgiveness and already spent the money as the relief remains held up in court.

Meet an adjunct professor with $230,000 in student debt who worries payments will restart without Biden’s loan forgiveness: ‘It will be an excuse to say they’d done all they can’

But he hopes millions of other federal borrowers can experience some relief before they are thrown back into repayment.

Through recently announced reforms to the Public Service Loan Forgiveness program, Babulski is hoping to get more payments counted toward his forgiveness progress once they are implemented. But his concern right now is that if Biden’s debt relief ultimately gets struck down, the White House won’t pursue any alternative routes to get promised relief to millions.

“My fear, regardless of the outcome of the case, is that the White House is so desperate to restart payments and get back to normal that they’ve forgotten that ‘normal’ is a decades-long debt sentence; either way, it will be an excuse to say they’d done all the can,” he said. “The only difference will be whether the majority of borrowers will be abandoned— or all of us will be.”