The same can be said of Alon Leichman, by all accounts the first athlete born and raised in Israel to make it to the major leagues, having just been named assistant pitching coach of the Cincinnati Reds.

His journey has been unlikely, verging on preposterous: How could someone from Israel, where baseball is barely an afterthought, step out of the wheat fields of a kibbutz to the highest level of baseball in the world?

The 33-year-old Leichman is the product of Kibbutz Gezer, the youngest child born to two idealists who grew up in Zionist youth groups and helped found this kibbutz in central Israel in the 1970s together with other Anglo — that is, English-speaking — Zionists.

But David, Alon’s father, couldn’t leave it all behind in Queens, New York. He was a baseball fan, a big baseball fan — “I always knew that if, God forbid, there’s a fire in my house, I know where my baseball glove is” — and one day, he and his fellow kibbutz residents had an idea: Why don’t we cut off a slice of the wheat crop and construct a regulation-sized field in the southwest corner of the kibbutz, where we can all go play when we get off work?

That was 1983, and there wasn’t a single baseball or softball field in all of Israel So David, who was in charge of construction on the kibbutz (Alon’s mother, Miri, is the kibbutz rabbi), built his field of dreams, just 450 yards from his front door and in the shadow of the 4,000-year-old archaeological site that gives Gezer its name.

And that’s where Alon Leichman grew up, first brought to the field by his father for the 1989 Maccabiah Games, five weeks after Alon was born on May 29.

“I never related to that field as the place my dad built,” Leichman said. “It was a field that was on the kibbutz. Growing up, everyone around me played — my older brother played, and all my friends, a little older than me, played. 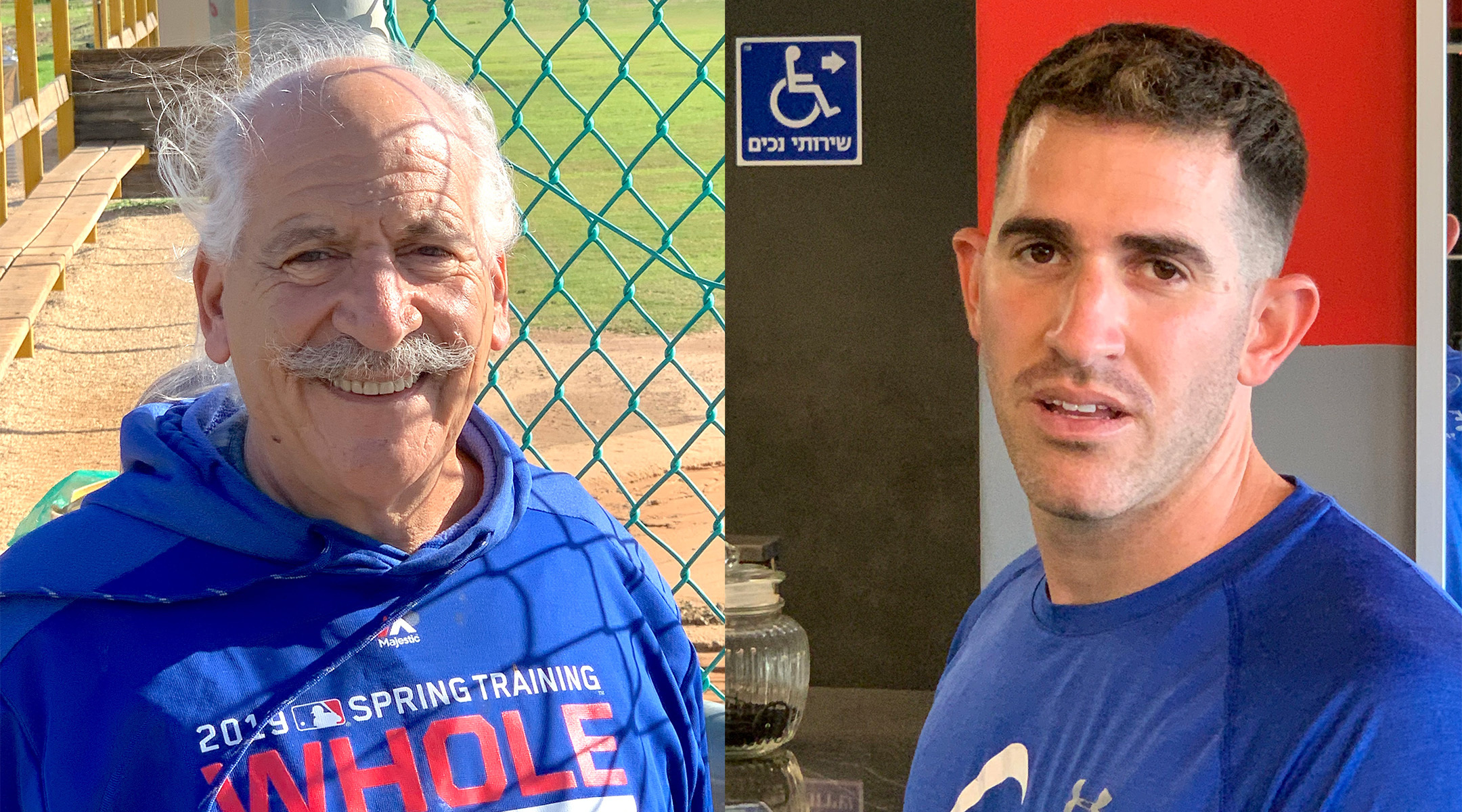 David Leichman, left, stands behind the backstop at the baseball field he helped build at Kibbutz Gezer in Israel, where his son Alon, right, learned the game that has brought him to the major leagues. (Elli Wohlgelernter) Image by

“I remember — I was 4, in gan [pre-kindergarten], and I would walk to the baseball field and practice. I vividly remember being in the gan and going to practice. But baseball on the kibbutz is just something that I grew into. Everyone did it; I was not special, just another kid who played. I happened to love it a lot.”

So he played and played and got better and better. By age 10, he was on the team representing Israel at a tournament in the Netherlands. But baseball in Israel back then was in its infancy, and there was not enough money to pay for the team to travel. So Leichman had to work extra hours to get the kibbutz to fly him over.

Not that he wasn’t used to working — like all kibbutz members, he was already contributing by third grade. But now he had to put in extra hours, picking olives or milking cows, to make the extra money.

“I liked milking cows,” he recalled. “Sometimes it’s hard work, but I got more of a kick out of it than hitting an olive tree” to shake loose the olives.

Leichman remembers well that tournament in Holland, the first time he wore the Israeli uniform representing his country abroad.

“I knew back then that Israel was not on the best terms [with] the world. So it was something that I was aware of: that part of our job of playing baseball is also making sure that these guys get to know Israelis other than what they hear on the news and show them that, you know, we’re good people.”

The 5’-8” right-hander kept playing, kept improving and kept representing Israel at tournaments. He played in the one-season Israel Baseball League in 2007 as the second-youngest player, served in the Israeli army from 2007 to 2010, and then headed to the states to play college ball at two schools, Cypress College and the University of California, San Diego.

In his first appearance at Cypress, his elbow blew out, and he needed what’s known as “Tommy John surgery” to repair a torn ulnar ligament inside the elbow. Then he got hurt again and had a second Tommy John surgery. But when he got hurt a third time, and the doctor said he needed to go under the knife yet again, Leichman knew that his hopes for a professional playing career were over.

But not before proving to himself that he had what it takes.

“I know I was good in Israel. I knew that. But I had no idea how I would fare coming to the States. I thought I could fare [well] there, but I really never knew because I had never faced those types of hitters. And then, in my first game, I did really well for two and a third innings, four strikeouts. No one got on. It was 1-2-3, 1-2-3, and then I got the first guy out in the ninth. And on a one-two fastball, my elbow popped. So it was like, ‘Okay, I can do this here.’”

His love for the game never left him, and Leichman grew into an insightful and intuitive coach. His expertise and aptitude were self-evident. 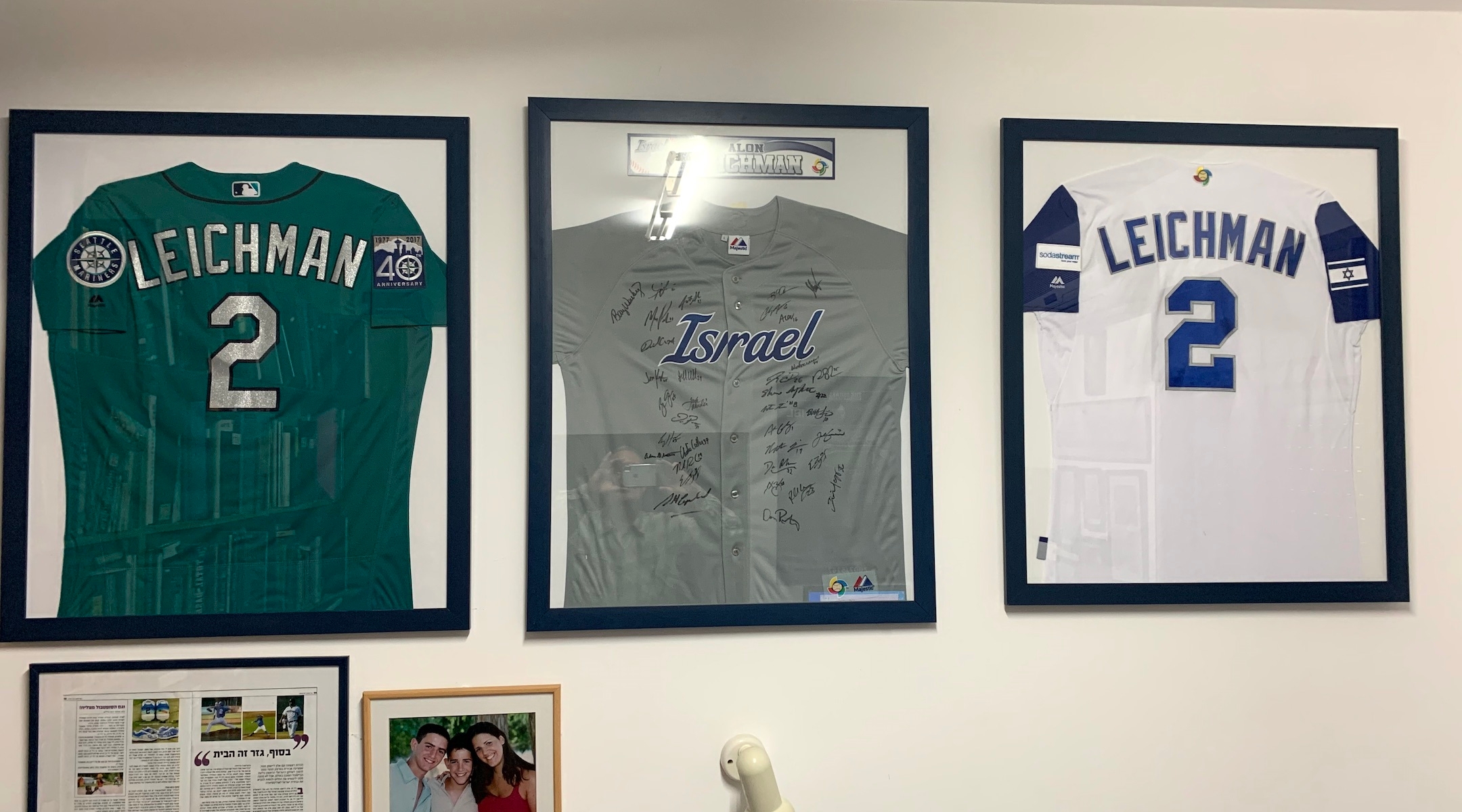 Various jerseys from Alon Leichman’s baseball career are displayed on the wall of his family’s home at Kibbutz Gezer, Israel. (Elli Wohlgelernter) Image by

“Alon will be a big-league coach one day,” pitcher and teammate Alex Katz said three years ago. “It’s hard to get a coaching job in affiliate ball without professional experience, let alone non-affiliated experience. But he’s just one of the most intelligent baseball minds I’ve ever been around. And he’s young.”

Leichman said his strength is “helping guys get better. Communicating with them. Being able to relate to them. Getting on their level. Simplifying it for them. And being creative and finding ways to throw more strikes.”

Despite the surgeries, Leichman could still pitch, if he did it sparingly. He joined Israel’s World Baseball Classic teams of 2012, 2016 and 2017 as a player or coach; pitched for the European Baseball Championship team in 2019; threw in the Olympic qualifying tournaments in 2019; and hurled one perfect inning against Team USA at the Olympics in 2021 in Tokyo. Along the way, he also earned a black belt in jujitsu.

But coaching was his future, and after being given a chance in 2017 to instruct in the Seattle Mariners farm system, Leichman kept moving up, from Single A to Double AA to Triple AAA, before being grabbed by the Reds to join their major league staff this season.

His father is overwhelmed. “It’s unbelievable,” David Leichman said. “I’m still shaking and crying to myself about how wonderful this has been. It’s really amazing.”

Alon is no less shell-shocked, having agreed to sign a contract with the Reds on the same day the New York Mets asked to interview him about a potential job.

“It’s not really sinking in yet, to be honest,” he said while in Israel recently to visit his family on Gezer. “But it’s definitely a dream come true, something I’ve been dreaming about since I’m a little kid. Obviously, I wanted to be there as a player, but once I got hurt and realized that playing was not an option anymore, I started pursuing coaching. I wanted to do it at the highest level. The dream remained; it just took a different route. But it’s still as exciting.”

Leichman is still undecided on whether to join Team Israel’s coaching staff in Florida for the WBC in March before heading back to Goodyear, Arizona, to rejoin the Reds in spring training. But this product of the wheat fields of Gezer won’t ever forget from where he’s come: His uniform numeral, 29, is a constant reminder. It’s his laundry tag number at the kibbutz.

The post Wild pitch: How an Israeli kibbutznik became a Cincinnati Reds pitching coach appeared first on The Forward.