One is a pistol-packing ex-member of an outlawed Jewish militant group. The other is a religious fundamentalist who once called himself a “proud homophobe”. Both are West Bank settlers averse to Palestinians’ self-rule – let alone their hopes of statehood.

And as senior coalition partners to reelected Prime Minister Benjamin Netanyahu, Itamar Ben-Gvir and Bezalel Smotrich will be within reach of the levers of power – a troubling prospect for Israel’s once-dominant secular-left and friends in the West.

Netanyahu turned to the ultra-nationalists after centrist parties boycotted him over his long-running corruption trial. He needs their support to stay in office as he argues his innocence in court. But he denies this spells pliability to their demands.

“I will navigate this government. The other parties are joining me. I’m not joining them,” Netanyahu told Al Arabiya on Dec. 15, pledging to enforce “liberal rightist” policymaking.

Besides, he said, “a lot of them have changed and moderated their views, principally because with the assumption of power comes responsibility”.

There may be precedent in Avigdor Lieberman, a firebrand whose 2006 appointment as deputy prime minister triggered much the same response as Ben-Gvir’s rise: liberal warnings of civil war and, on Israel’s top TV satire, his lampooning as a Nazi.

Lieberman proved to be politically adaptable. He served in various coalitions – one of which included an Islamist party – and ended up in the current opposition, from which he has scorned Netanyahu’s new allies as “zealots and extremists”.

Still, Lieberman could also play spoiler from the right. As Netanyahu’s foreign minister in a previous government, he would publicly promote a harder line on the Palestinians than the premier’s. In a later term, Lieberman resigned as Netanyahu’s defence minister in protest at a Gaza truce he deemed too lax.

Netanyahu’s conservative Likud party has now retained the defence and foreign ministries. But the optics around Ben-Gvir and Smotrich may yet prove combustible for him – for example, if either man visits or prays at Jerusalem’s Al Aqsa mosque compound, an icon of Palestinian nationalism which is also the holiest site for Judaism as vestige of its two ancient temples.

Netanyahu’s previous 15 years as premier saw him feathering the nests of the hawks in his cabinet – or clipping their wings – as he deemed necessary. Back then, however, he had parties to his left to help him function as an ideological fulcrum.

“With all the parties in the incoming government situated to Netanyahu’s right, it will be difficult for him to replicate that role this time,” argued Yohanan Plesner, president of the Israel Democracy Institute think-tank. “Does he want to?”

On Ben-Gvir’s and Smotrich’s calls for West Bank annexations, Netanyahu is on record as being in favour while also avoiding action on the ground that would risk escalating into confrontations with Washington or Arab partners.

Yet Smotrich did carve out a cabinet niche for himself overseeing settlements, which most world powers deem illegal for taking occupied land that Palestinians want for a state.

“He can be effective in multiplying and consolidating Israel’s presence in the West Bank,” said Amotz Asa-El, research fellow at the Shalom Hartman Institute, noting Smotrich’s high pace of infrastructure-building as a former transport minister.

For Ben-Gvir, by contrast, this is the first stint in government. As police minister, he will focus on law-and-order issues important to a swathe of Israelis, Asa-El predicted – including crime-hit Arabs against whom Ben-Gvir once agitated.

“After legitimating his position in broader Israeli circles, he will proceed to the realms that not all agree on – namely the West Bank,” Asa-El said. But that may have to wait, as Ben-Gvir’s portfolio does not grant major powers in the West Bank, which is under the overall control of the military.

Arguably, Ben-Gvir, 46, and Smotrich, 42, can afford to shelve some of their agendas for this round with Netanyahu, 73.

“But that’s counting on restraint from people who come from very different ideological world-views than what we’ve seen in Israeli governments before,” said Daniel Shapiro, a former U.S. envoy to Israel and now Atlantic Council distinguished fellow.

Ben-Gvir came up through the Kahane Chai group, which is blacklisted in Israel and the United States for its virulently anti-Arab doctrines. Smotrich’s advocacy of Jewish claims on the West Bank is informed by a doctrinaire faith in Bible prophesy.

Earlier generations of Israeli far-rightists in government “demonstrated an interest and capacity to engage in a genuine two-way dialogue with the United States and other international players, and seemed to recognize the limits on pursuing some of their most ideological positions,” Shapiro said.

“It remains to be seen whether that approach will characterise members of the incoming coalition.”

Alan Dershowitz, a prominent American-Jewish jurist who has advised U.S. and Israeli leaders, said Ben-Gvir and Smotrich disavowed racism and homophobia in meetings with him this month.

“The word ‘balance’ came up a number of times” in their reassurances during the conversations, Dershowitz told Reuters.

“Obviously they were in some ways trying to get me to have a positive impression of them,” he said. “Let’s see what happens when I’m not in the room and the people in the room are pushing them to become more extreme. That’s the litmus test.” 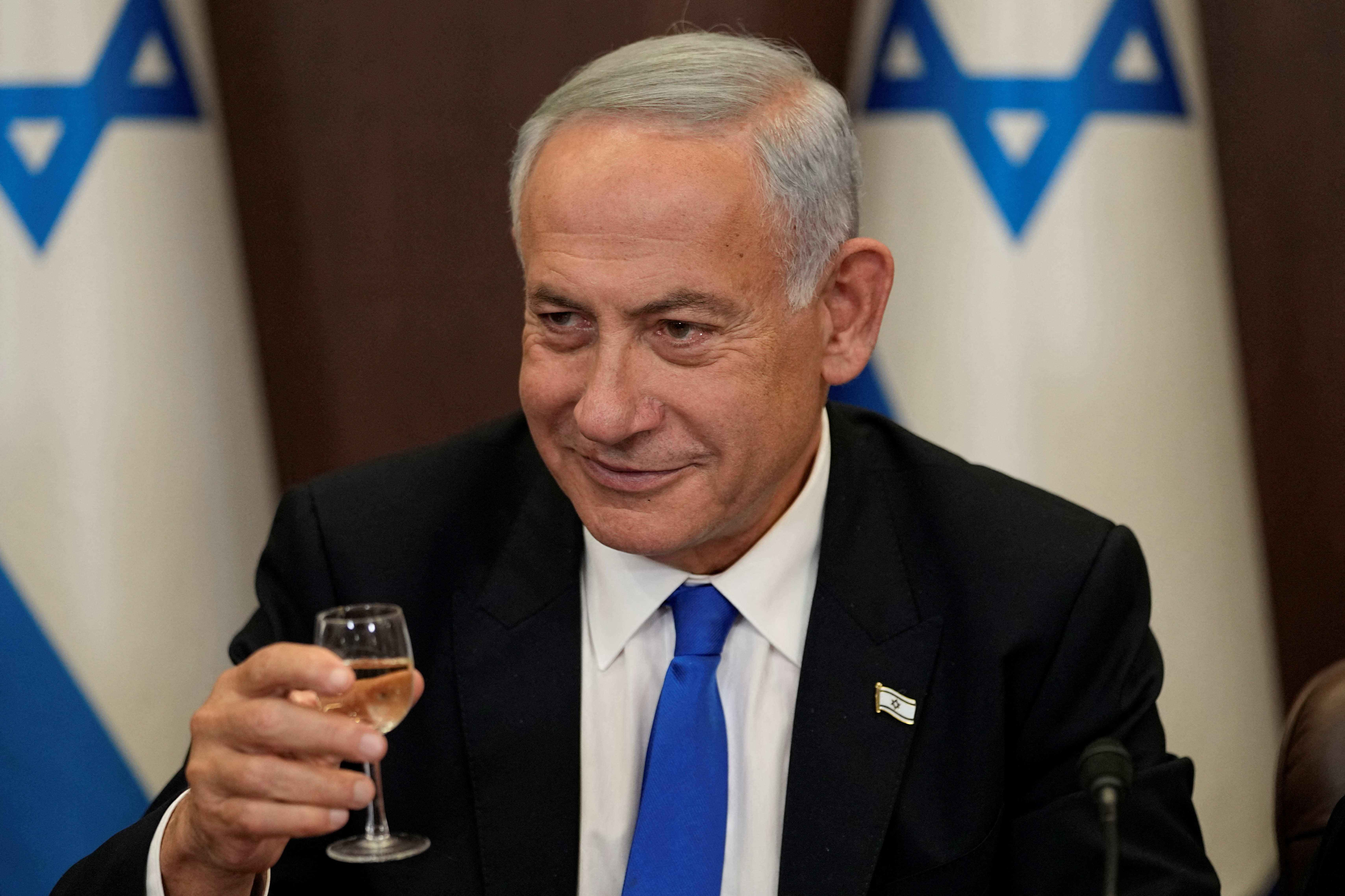 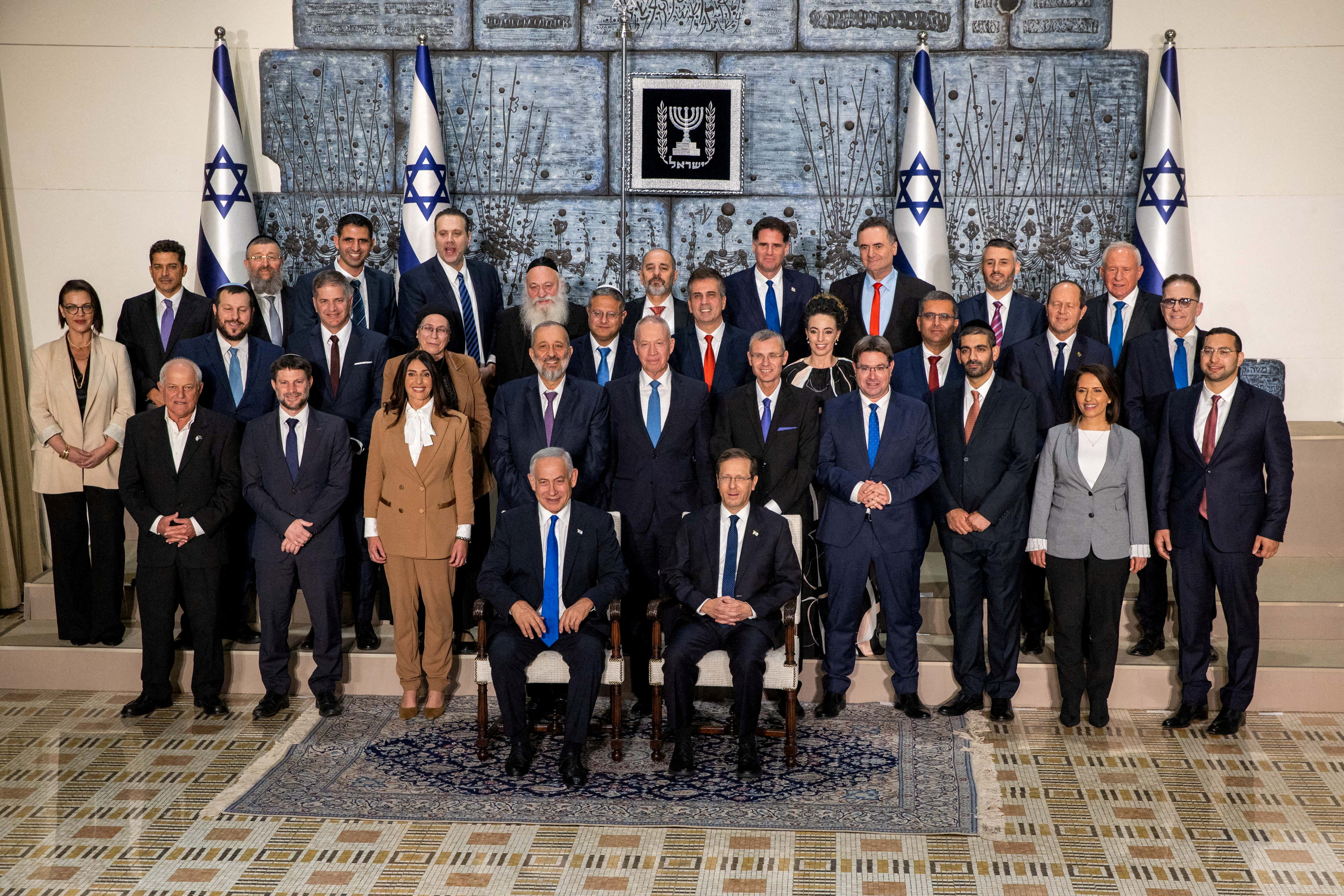 Israeli President Isaac Herzog and newly-elected Prime Minister Benjamin Netanyahu pose for a group photograph with members of the new Israeli government after their swearing-in ceremony, at the president’s residence in Jerusalem, December 29, 2022. REUTERS/Oren Ben Hakoon