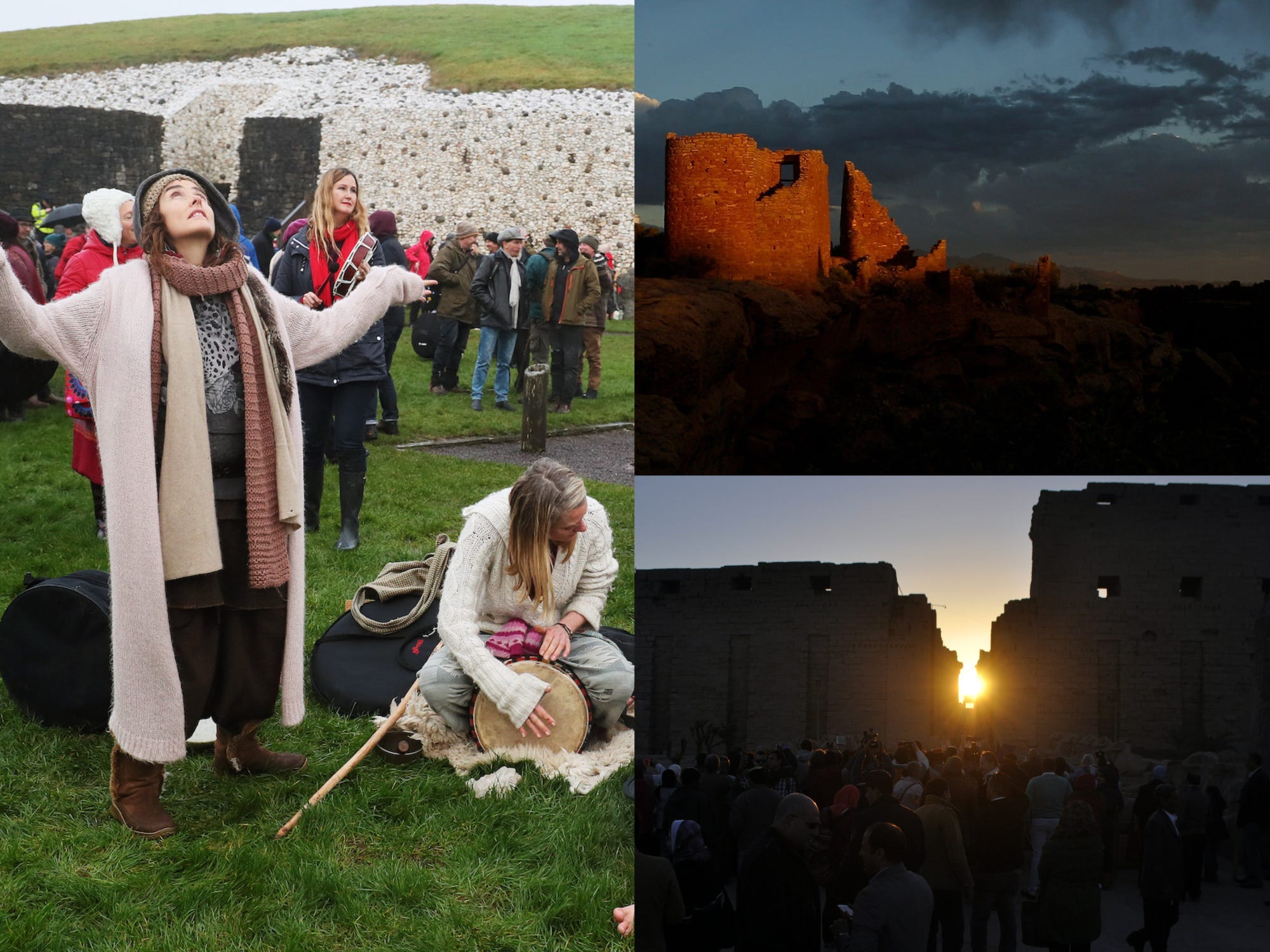 Newgrange in Ireland, Hovenweep Castle in the US and the Karnak temple in Egypt are three sites thought to have been purposefully aligned with the sun on winter solstice

The winter solstice is the longest night of the year.

For millennia, people have looked out for that somewhat mystical day, which often symbolizes the beginning of winter or a time of rebirth.

Archaeologists have found many ancient sites that line up with the winter solstice sun. But the purpose of these sites often remains shrouded in mystery.

Here are 11 sites that line up with the winter solstice, and what experts think about them. 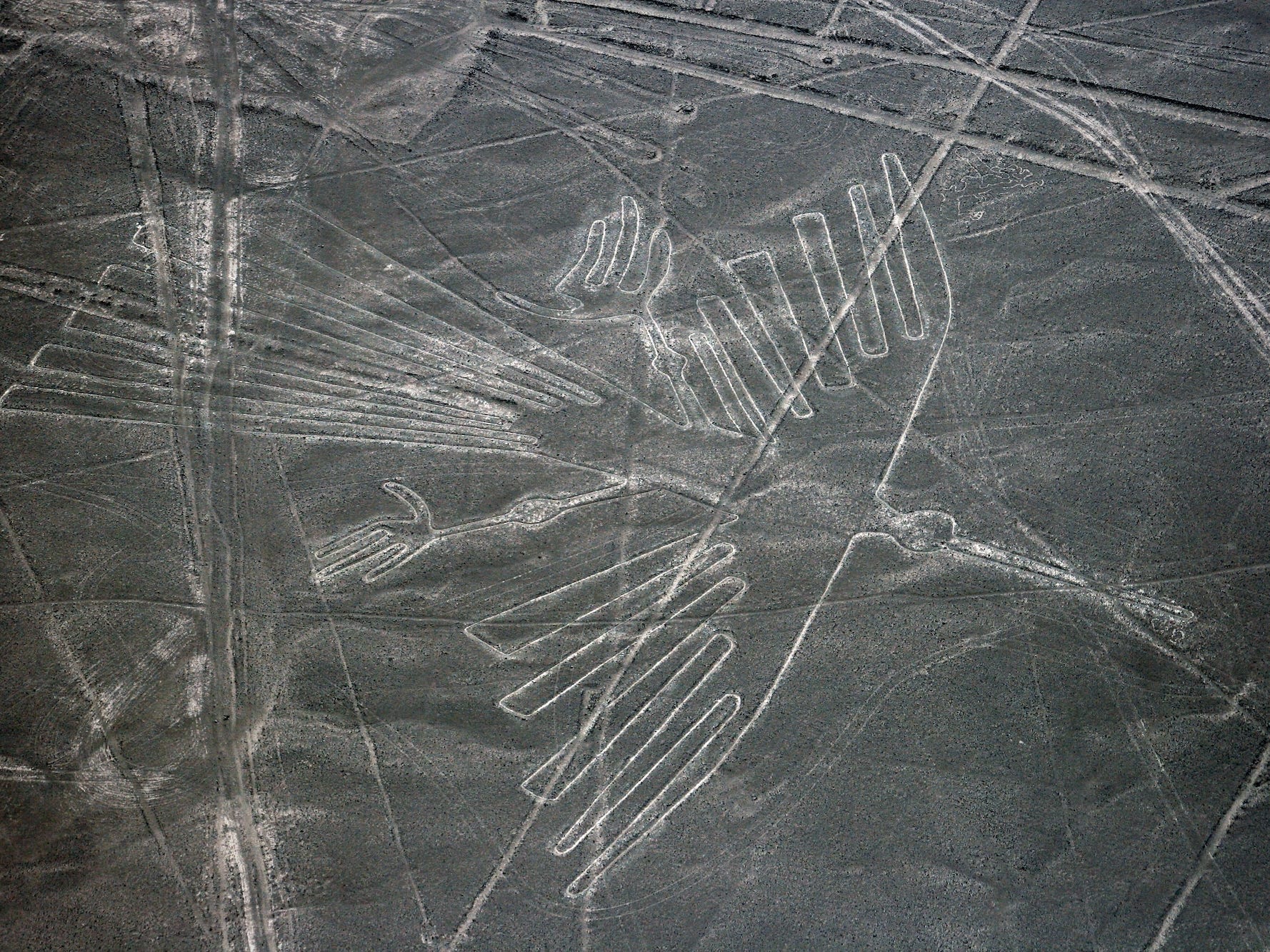 Scientists who studied the Nazca lines in the 1940s noticed one of them lined up perfectly with the southern hemisphere sunset on July 21.

Paul Kosok and Maria Reiche, who studied the phenomenon, thought this could mean the mysterious lines could serve as a sort of astronomical calendar.

That theory has since been discredited, and we still don’t know what practical or spiritual purpose these lines may have served. But the idea remains a draw for tourists around the world. 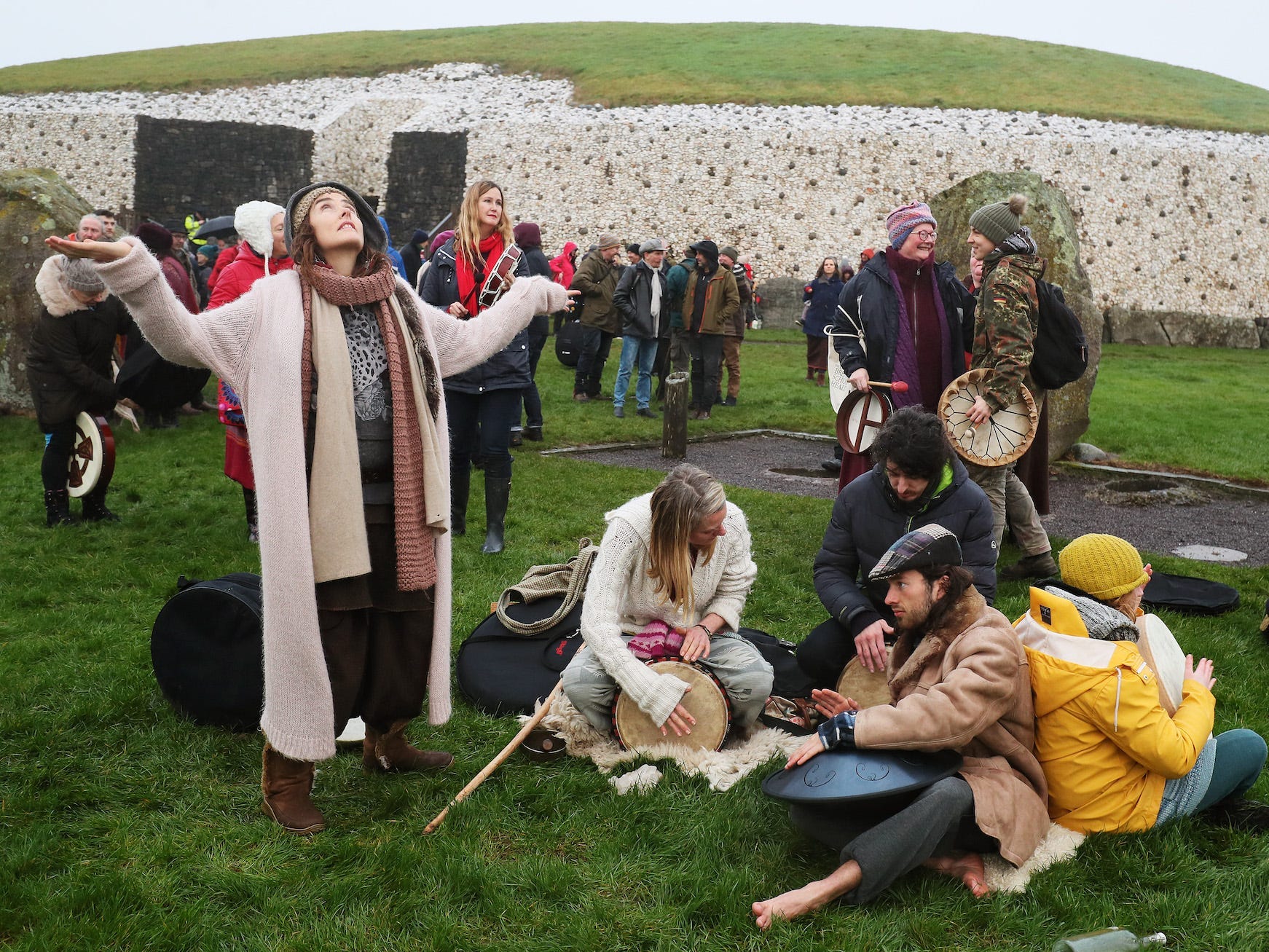 People celebrating the sunrise at Newgrange on the morning of the winter solstice in 2018.

Found 26 miles north of Dublin, Newgrange, a massive circular structure, is about 5000 years old. That makes it older than Stonehenge and the pyramids.

“There are a number of Neolithic monuments that have solstice or equinox orientations at the heart of their architecture, indicating that these alignments were core to their belief system,” said Jennifer Wexler, curator of the World of Stonehenge exhibit at the British Museum, in an email to Insider.

Newgrange is one of the earliest of these monuments that aligns with the winter solstice, and may have inspired Stonehenge, she said. They were generally built by early farmers, she said.

“Key to their survival was understanding important moments in the seasonal cycle and the cycle of the sun, as this would dictate their farming year as well become central to their religious beliefs,” she said.

Above the entrance at Newgrange, a slab of rock placed horizontally creates the so-called roof box, which can be seen below. 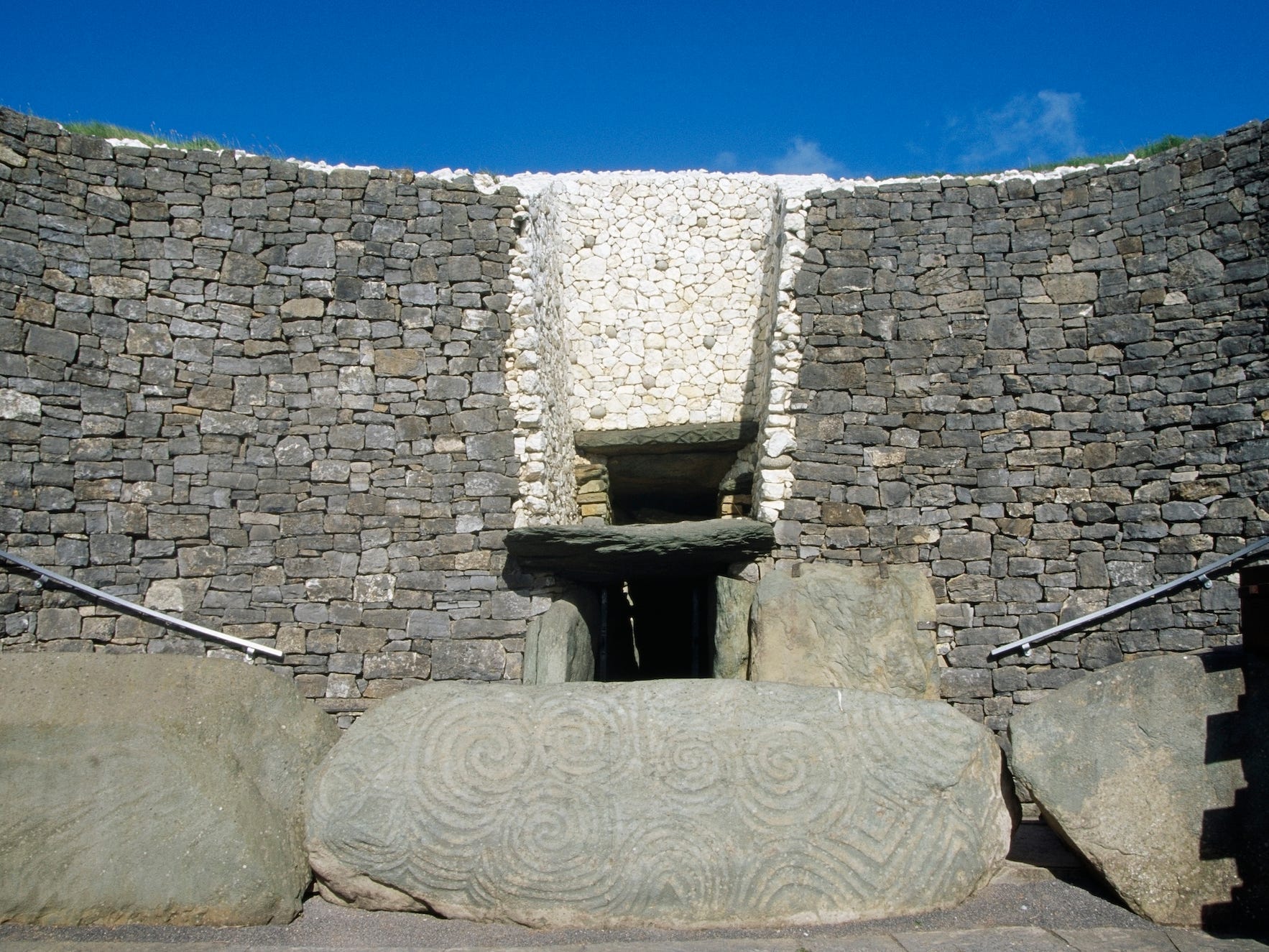 On the winter solstice, light filters through this tiny opening and creates a bright beam that travel through a 62-foot passageway to an inner chamber.

The beam spreads to finally illuminate the whole chamber.

There’s little doubt that this building was made to mark the solstice. Its impressive architecture seems entirely directed towards capturing that singular beam of light.

But because this was built in prehistoric times, there’s no written record of what it may have been used for. It’s possible it was only used to mark the time, but scientists suspect it may have had a spiritual or ritual significance. 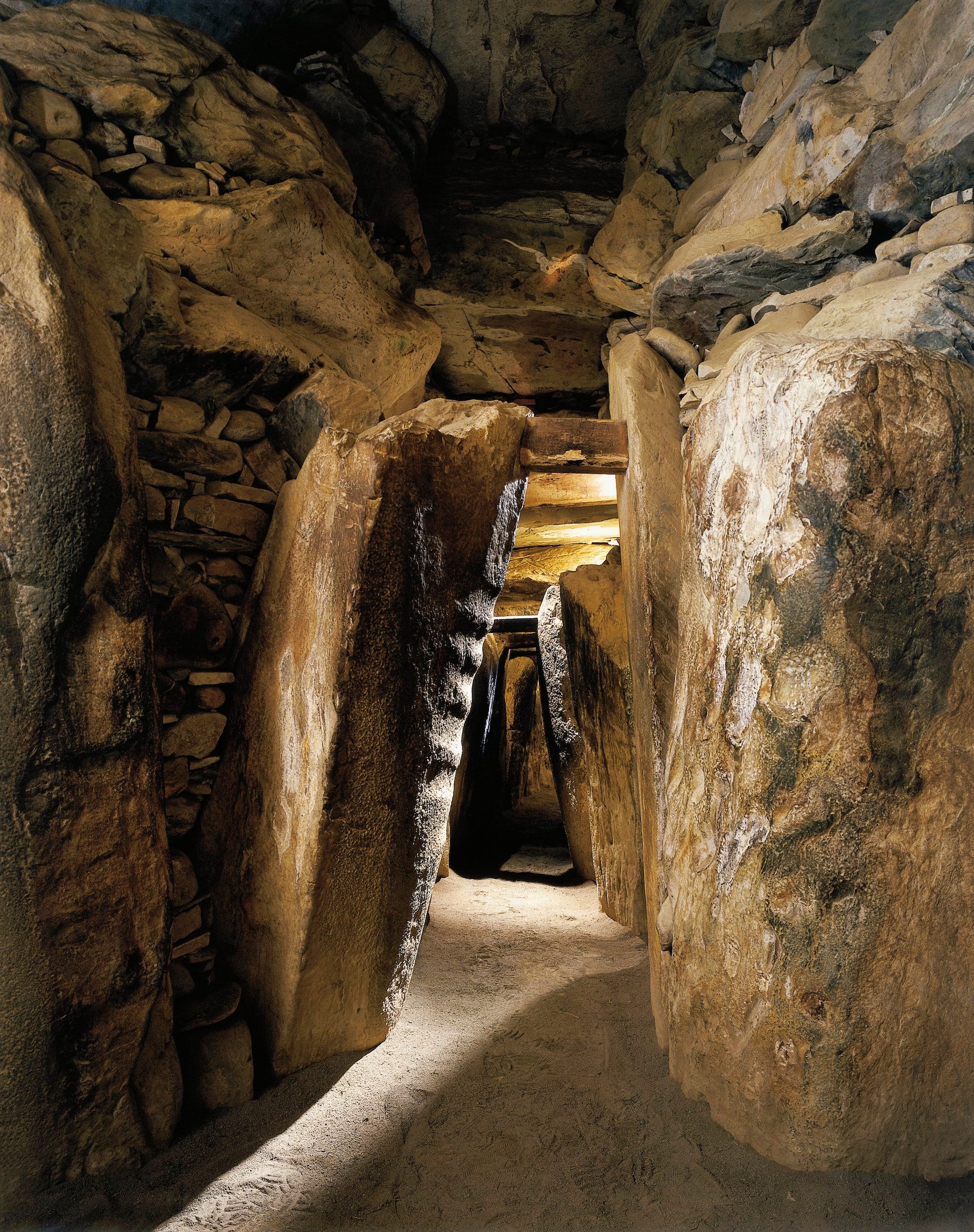 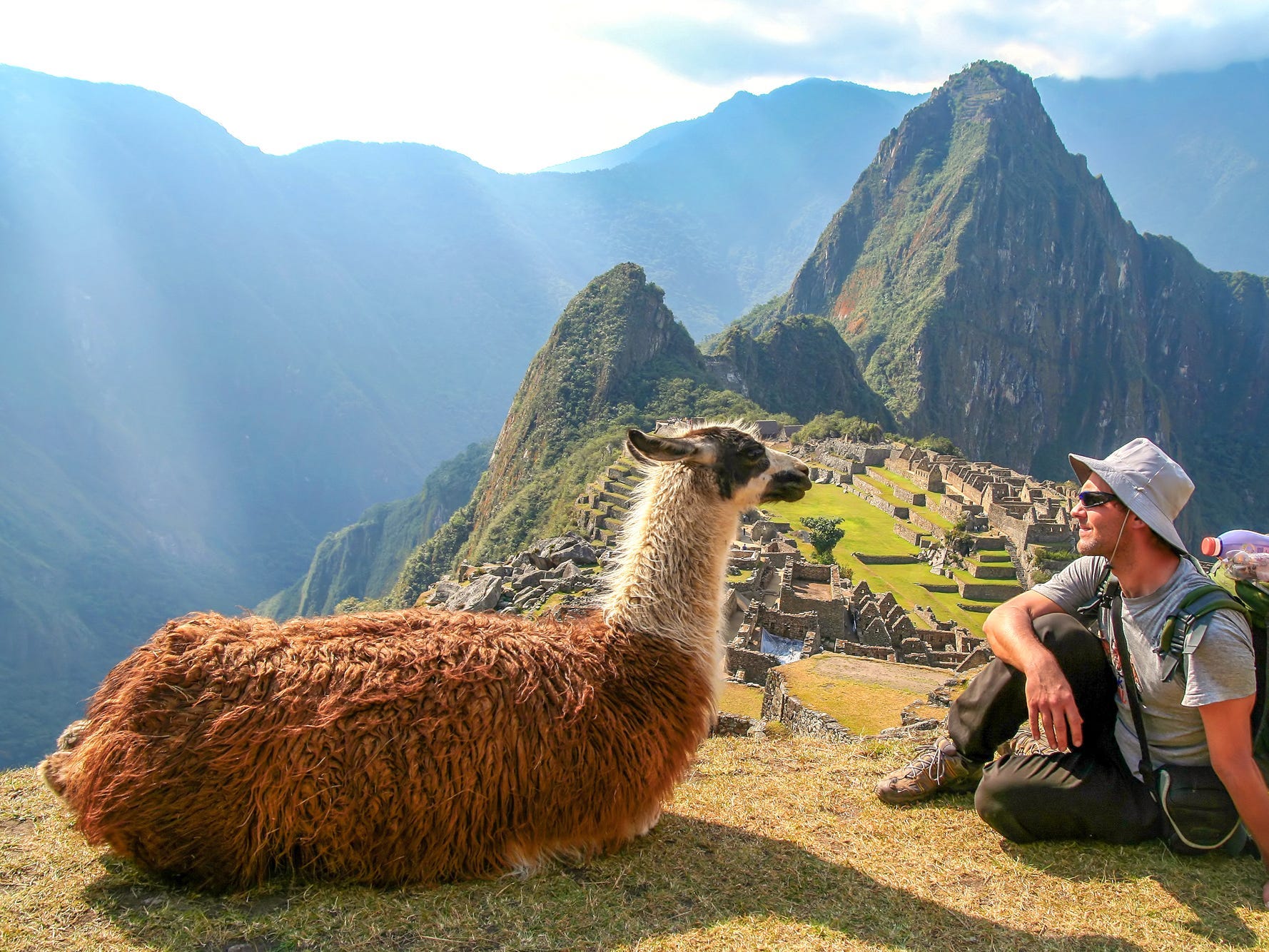 A tourist and a Llama in fron of Machu Picchu.

One of the most famous examples of ancient architecture lining up with the winter solstice is in Machu Picchu, Peru.

On June 21, the winter solstice in the southern hemispheres a beam of light shines through a window on a temple celebrating the sun god, forming a rectangular shape on a slab of granite.

Machu Picchu also hosts another, perhaps slightly less well known, monument to the December solstice, called Intimachay or “the cave of the Sun”. The sun shines onto the back wall of this structure for 10 days before and after the solstice. 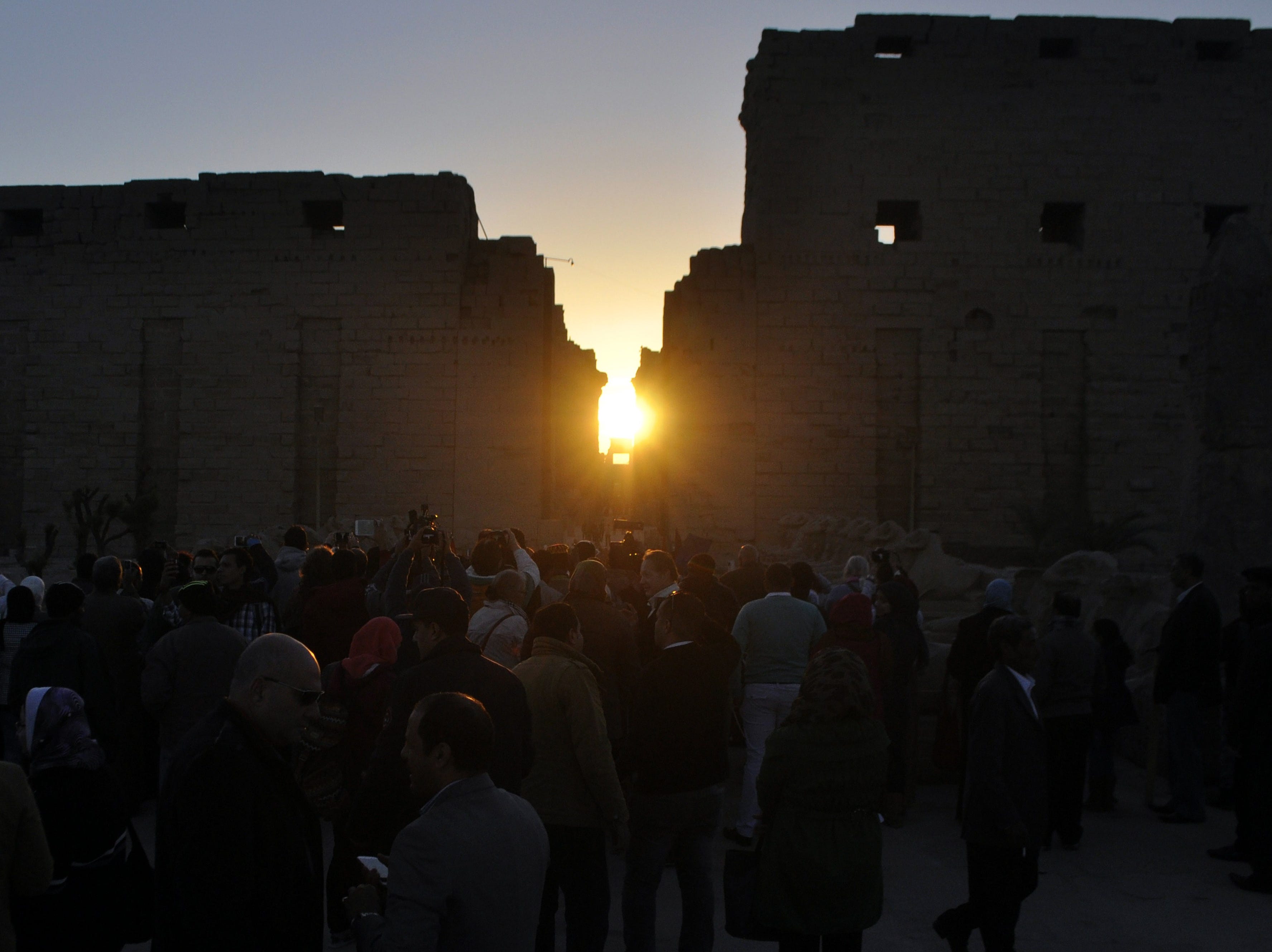 The sun rises behind the Temple of Karnak during the alignment of the winter solstice sunrise to the temple in the southern Egyptian city of Luxor on December 20, 2014.

Tourists flock to the Temple of Karnak to watch the winter solstice rise in alignment with the main axis of the temple.

The temple was built in Luxor more than 4,000 years ago. It was the main place of worship the sun god Amun-Ra.

When it was originally designed, the sun would have been perfectly aligned with the temple’s axis, but one study said that the alignment has since been knocked out of whack by half a degree due to the Earth’s axis wobbling.

An ancient tomb in Qubbet el-Hawa, Egypt, revealed this year 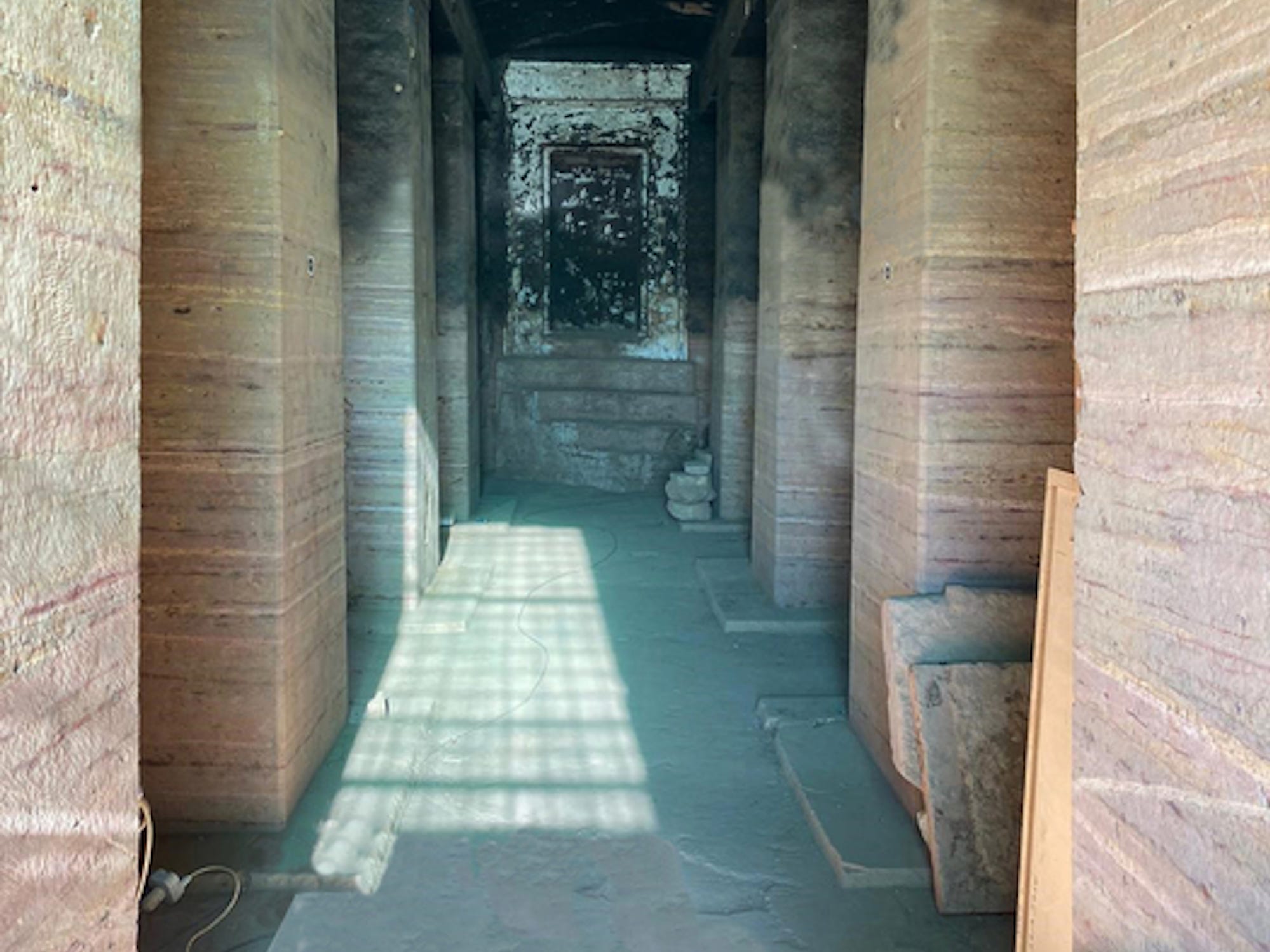 Tomb 33 in Qubet el-Hawa aligns with the sun in winter.

University of Jaen and Malaga

A tomb found in the necropolis of Qubet el-Hawa in Egypt may be the oldest tomb oriented to the winter solstice, scientists said in November.

Light filters into tomb, seen above and his the back on the day of the winter solstice. When it was built in around 1830 BC, a statue of the local governor would have been placed in the alcove.

“The alignment of tomb 33 in Qubbet el-Hawa was INTENTIONAL and it was full of religious significance,” Alejandro Jiménez-Serrano, director of Qubbet el-Hawa Project from the University of Jaén, Spain, told Insider in an email.

“From the winter solstice the days are longer, which was a metaphor of the rebirth of the deceased,” he said. 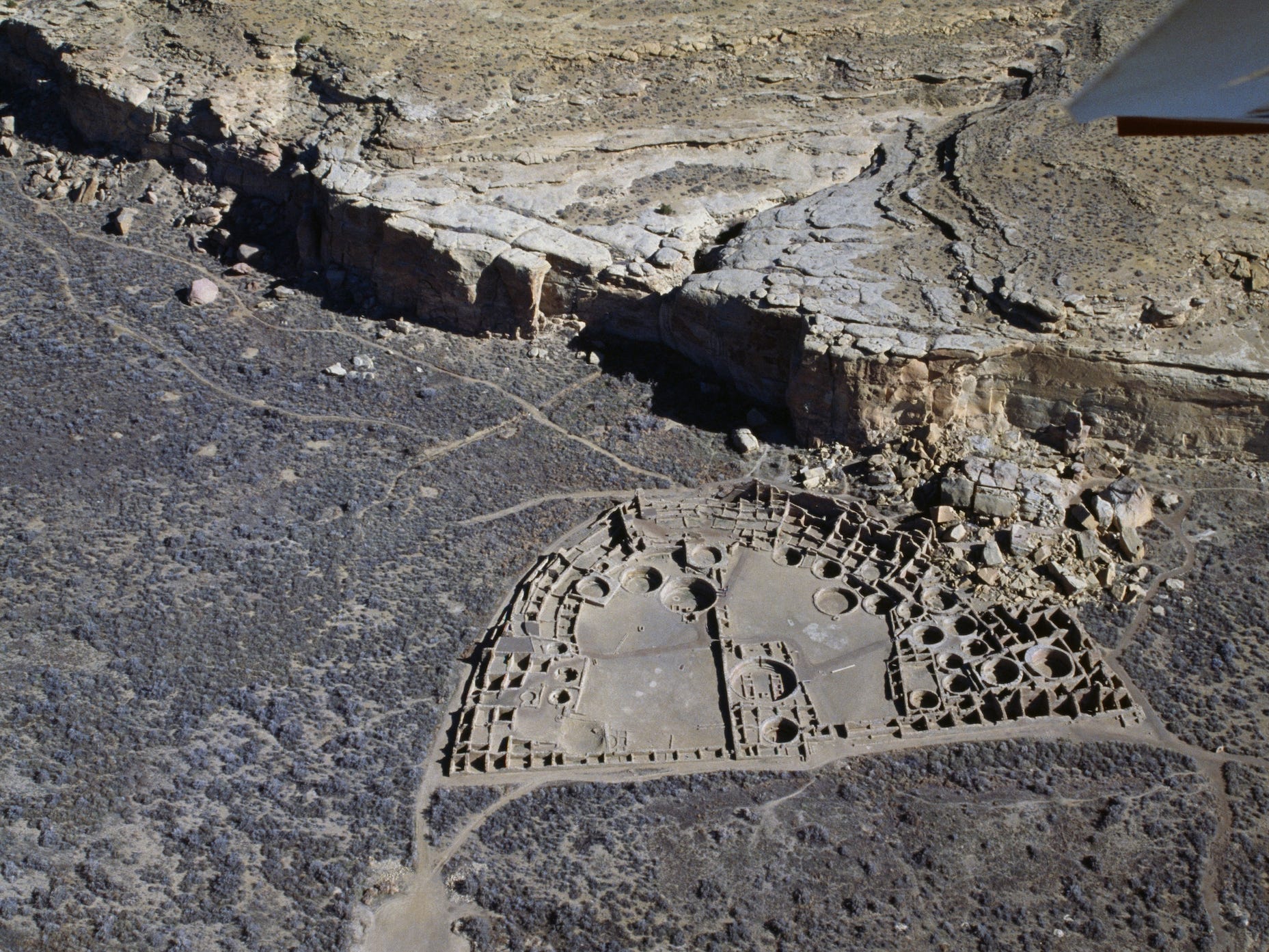 Pueblo Bonito in the Chaco Canyon, New Mexico, US, is seen from above.

This settlement, called Pueblo Bonito, seems to have been constructed in line with astronomical landmarks in order to maximise solar heating during the year.

Built between 850 and 1150 by ancestral Puebloan peoples, it was a massive house.

Two second-story windows on the southeast end of the building have attracted scrutiny over the years. Light only shines through this window during eight weeks of the year, in the lead-up to the winter solstice.

Though it is possible this is a coincidence, scientists think this could have given people in the house a lead-up to prepare for the winter months. 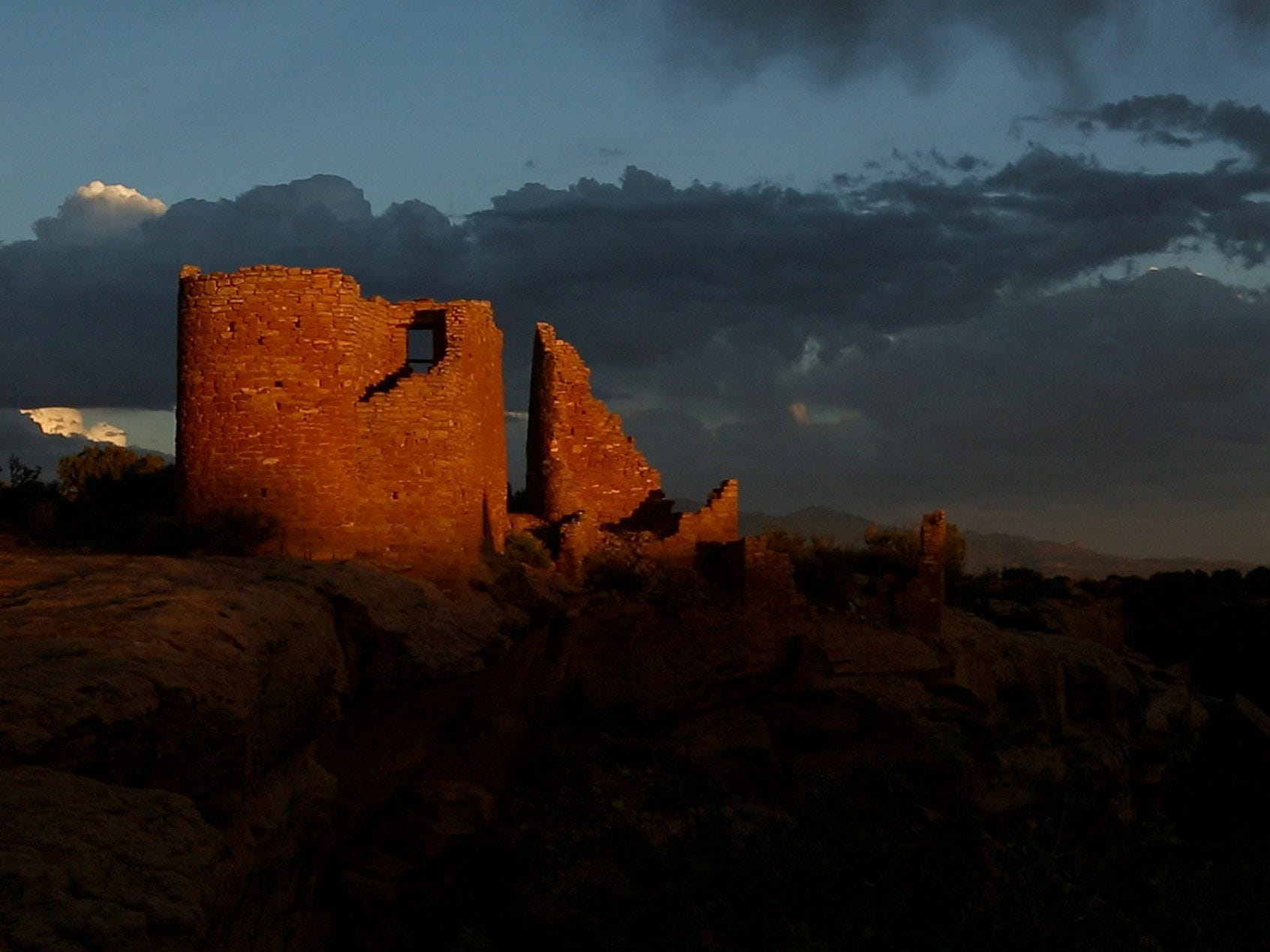 The Hovenweep castle was an ancestral Puebloan settlement, inhabited until the early 14th century.

It is thought that the openings on the face of the castle would line up with the equinox and winter-and-summer-solstice sun to allow Puebloans to trace a calendar as the light shone on the wall. 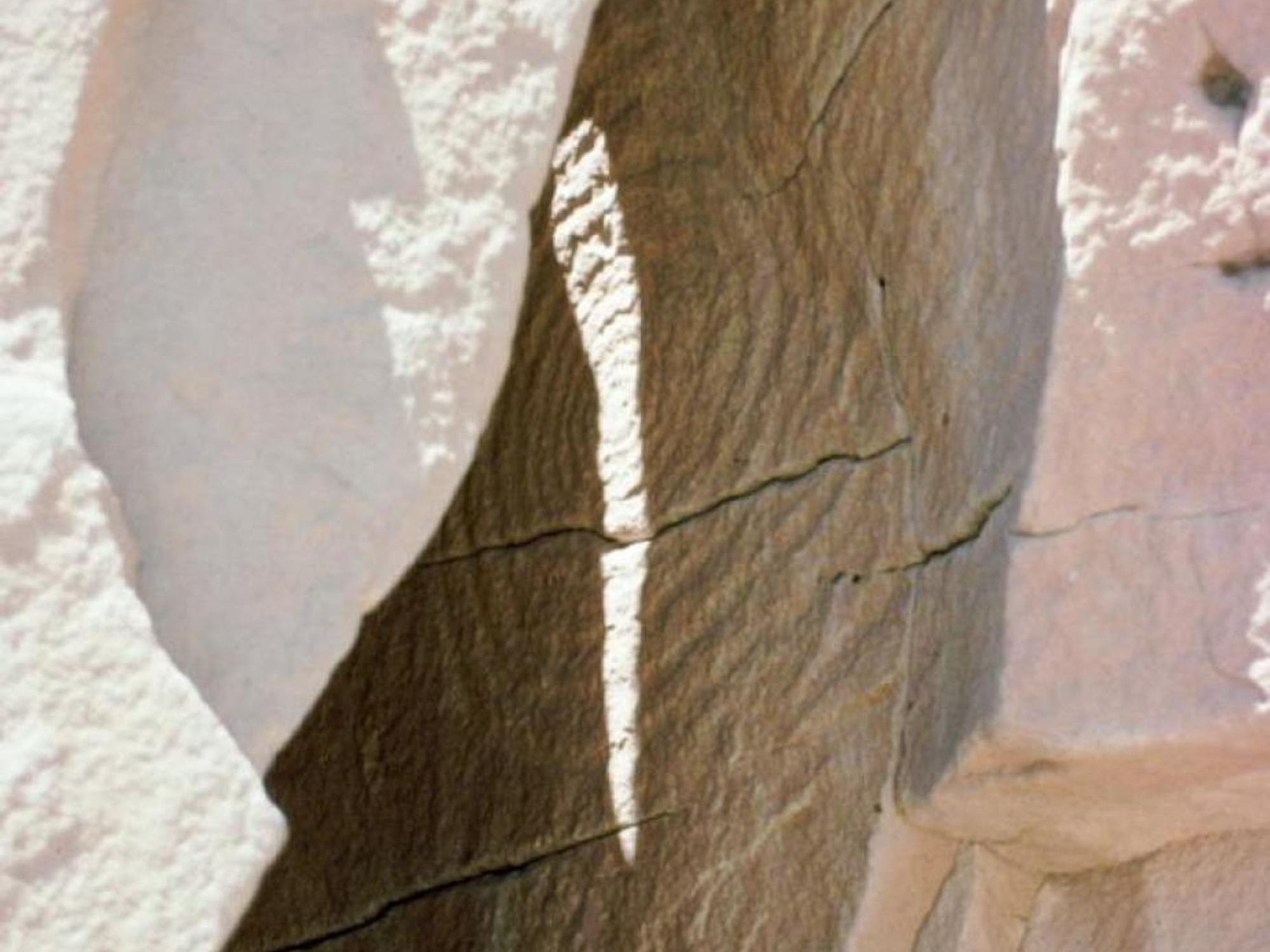 A ‘sun dagger,’ here seen on the summer solstice, appears on solstice and equinoxes across a spiral petroglyph on the sandstone.

The ancestral Puebloan people, who lived in the US southwest until the coming of Spanish explorers in 1540, kept a close eye on the sun because they relied heavily on agriculture for their food.

To spot the change in seasons, it’s possible they marked where these “sun daggers” appeared on the rocks by drawing petroglyphs, specific shapes, in the rock.

The most famous sun dagger is found in Fajada Butte in Chaco Canyon, New Mexico.

During the summer solstice, as seen above, a sun dagger splits a spiral glyph through the middle. During the winter solstice, two daggers appear, which bracket the spiral perfectly, as can be seen in the presentation below.

There has been some debate about whether these carvings were intentionally placed there or they were drawn at random and some just happened to be lined up with the solstice light. 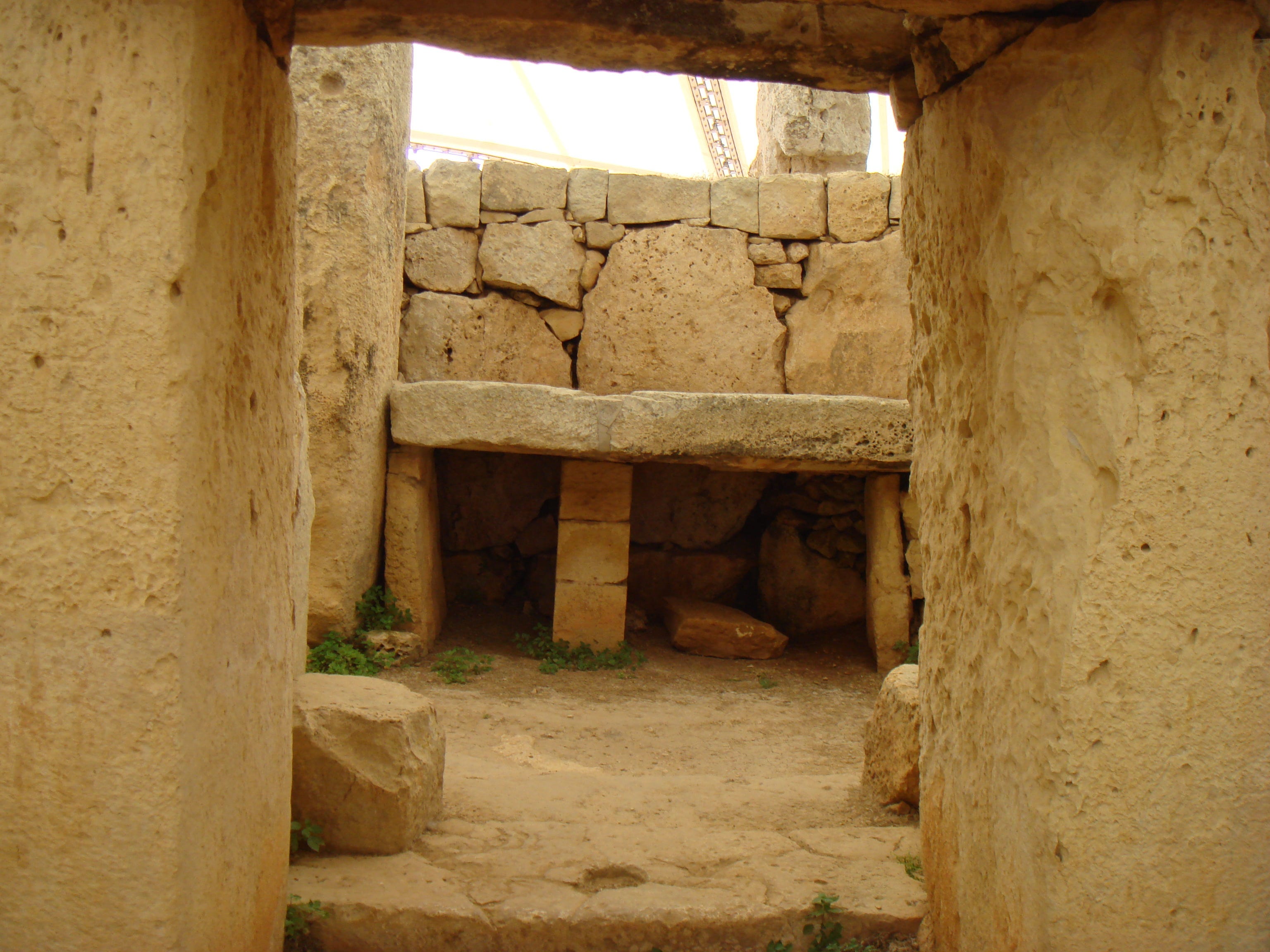 A megalythic temple in Malta is shown here.

Seven megalithic temples found on the islands of Malta and Gozo in the Mediterranean are world heritage sites. These prehistoric monumental buildings were built between 4,000 BC and 3,000 BC.

One of these temples, called Mnajdra, is suspiciously aligned with the winter and summer solstice. However, scientists are still debating whether this was by design. 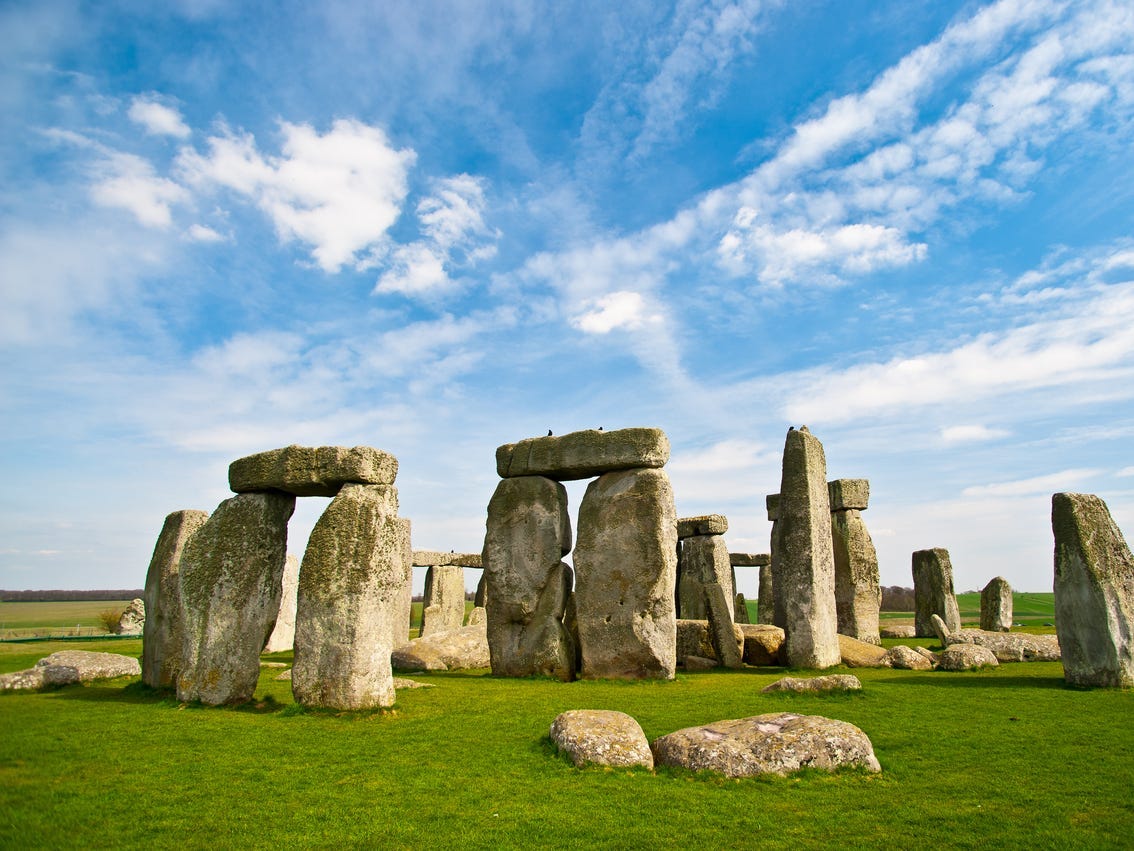 Perhaps the most iconic solstice site, people swarm to witness the sun lining up with the stones in Stonehenge on England’s Salisbury Plain.

“Stonehenge was built to align with the sun on the solstices,” Wexler, the Stonehenge expert, told Insider.

“The winter solstice had particular resonance, a crucial time when the sun’s return hung in the balance. Ideas of rebirth were intertwined with the celebrations just as they are with our own mid-winter celebrations,” she said.

Again, because there is no written record of that time, we don’t know exactly what Stonehenge was for.

But evidence suggests at least, that it was a site that brought together people from all over the country, who met over the winter months to have lavish feasts and build the massive stone structure, Insider previously reported. 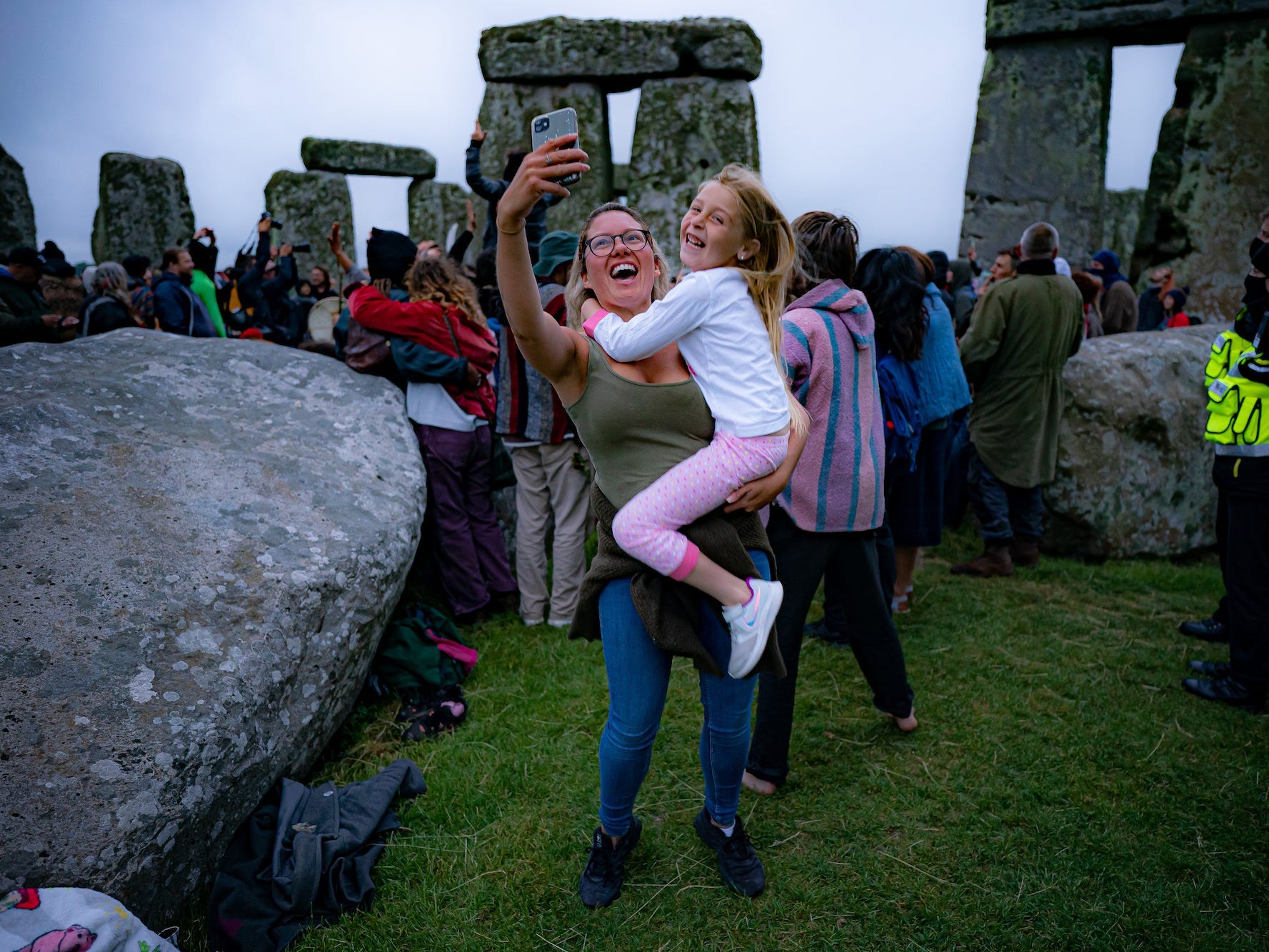 People celebrating the Summer Solstice at Stonehenge on June 21, 2021 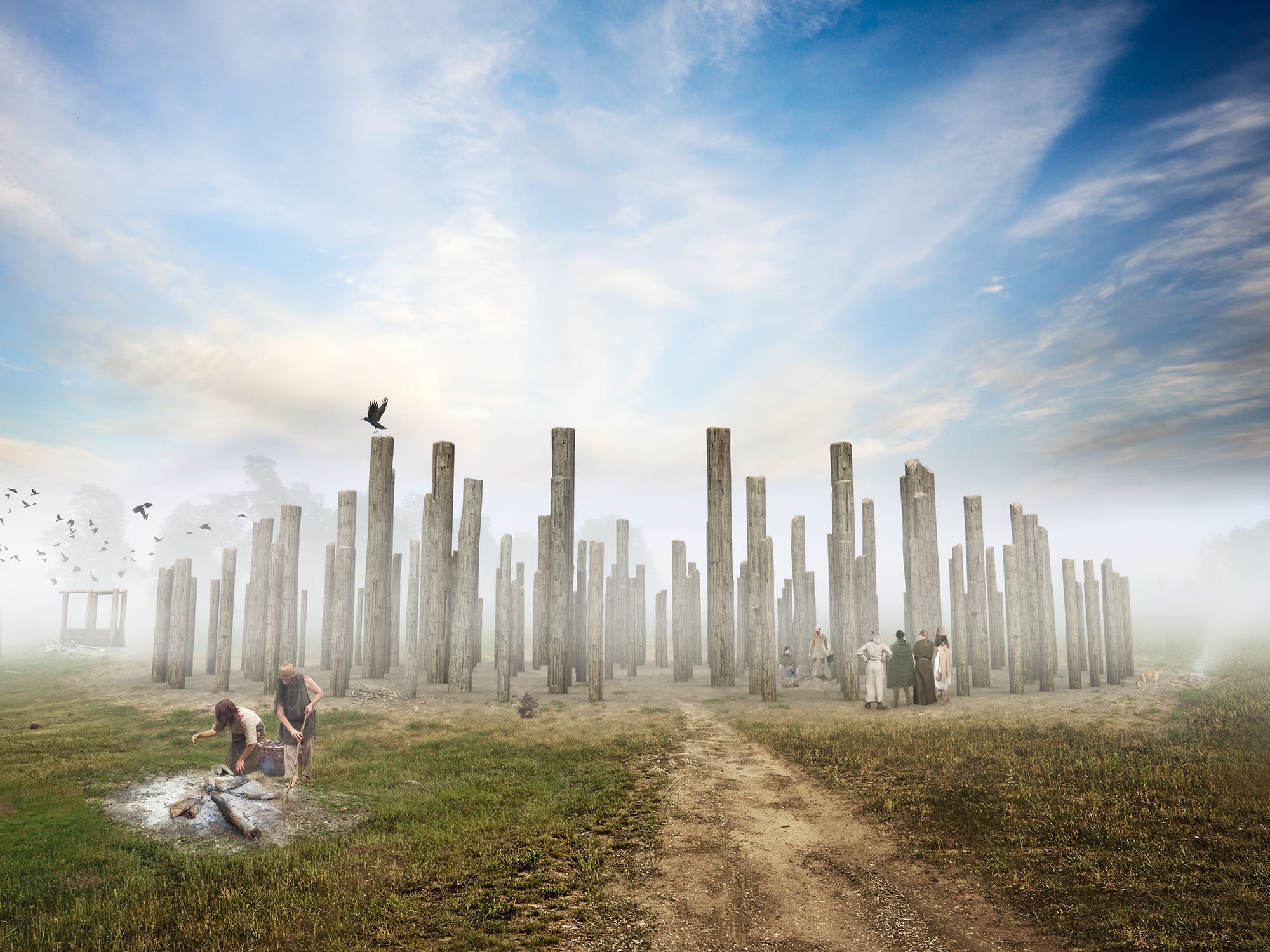 An illustration shows the wooden structure seen at Durrington walls around 2500 BC.

These Stonehenge feasts would have taken place in the nearby human settlement in Durrington Walls.

The settlement was made up of hundreds of wood and chalk houses surrounded by three huge ceremonial structures out of wood pillars.

“To anybody at that time, Durrington Walls would’ve looked more impressive than Stonehenge,” Michael Parker Pearson, a lead archaeologist on the Durrington Walls excavation site and an author of the study, previously told Insider. 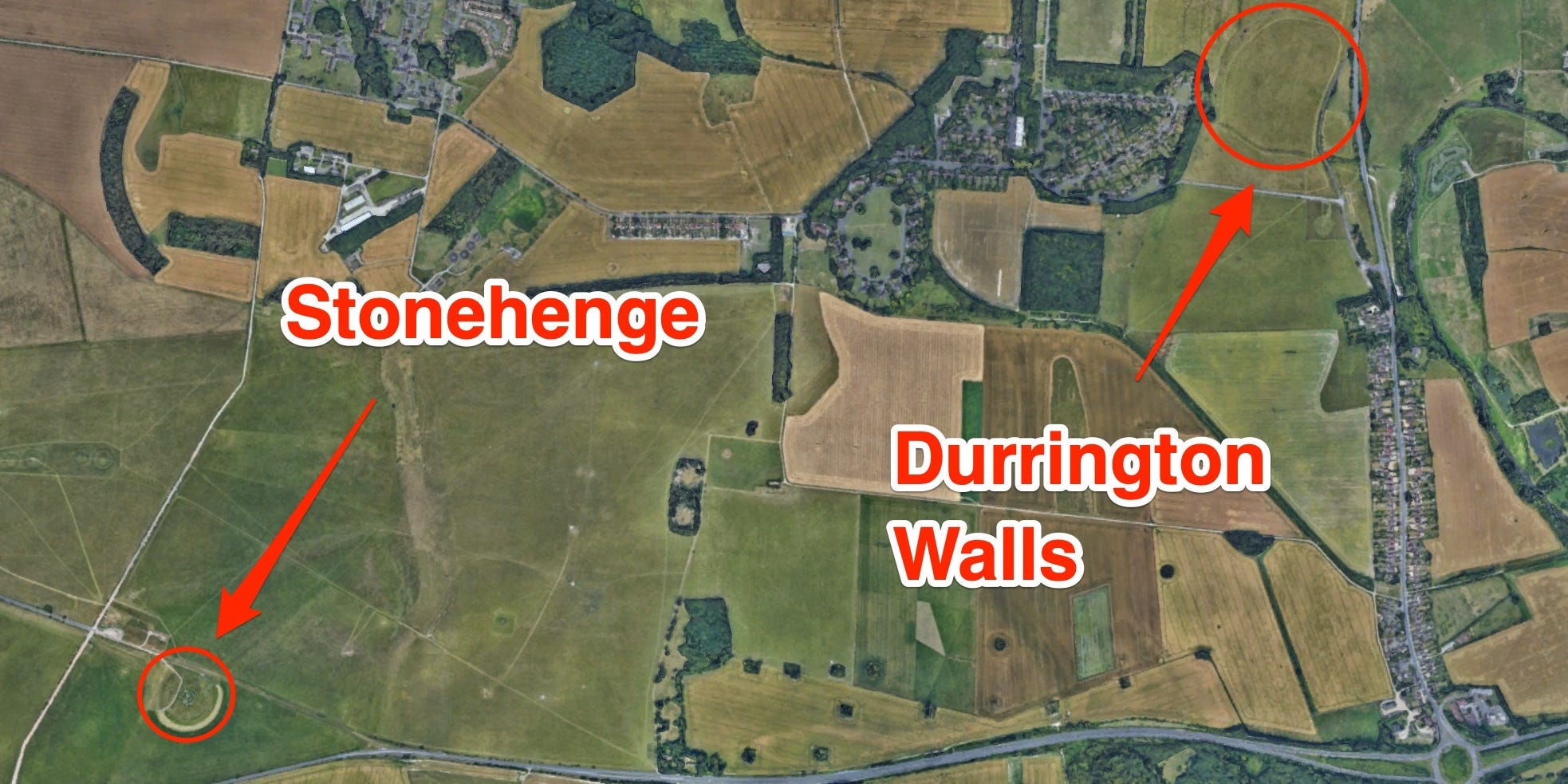 The Durrington Walls archeological site is about 1.7 miles from Stonehenge.

“Like Stonehenge, Woodhenge and Durrington were aligned with the solstices,” Wexley said.

“People gathered there from long distances in midwinter for feasting and celebrations. Pilgrims embarked on a choreographed procession to Stonehenge, starting at Durrington and Woodhenge at midwinter’s dawn, then by boat along the River Avon, arriving at Stonehenge for sunset,” she said.

Home » Audio Sources - Full Text Articles » 11 ancient sites that are mysteriously aligned with the sun on the winter solstice, in photos.
a