(JTA) — When Russian troops poured across the Ukrainian border in March, thousands fled from the cities that would be first in their path. But in Kherson, the southern port city with strategic value to the Russians, Rabbi Yosef Itzhak Wolff decided to stay put.

His decision to remain put him in line with the philosophy of his Jewish movement, Chabad, whose rabbis typically commit to the cities where they are stationed and stay there through thick and thin.

But his decision could also cost him the ability to serve Kherson’s Jews. According to a report this week in the New York Times, Wolff is now in Germany, concerned because some in Kherson accuse him of collaborating with the Russian forces.

Meanwhile, a member of his Jewish community is facing life in prison over his actions during the chaotic early days of the war, according to the New York Times report.

Russia captured Kherson on March 2, 2022, and for months, the city suffered a brutal occupation that resulted in hundreds dead and scores more “disappeared” or tortured, according to Human Rights Watch.

Among those living in the occupied city was Wolff, an Israel-born rabbi who arrived in Ukraine nearly 30 years ago, just after the fall of the Soviet Union and Ukraine’s independence. For the past 13 years, he had presided over a Jewish community in Kherson estimated before the war at 8,000 people.

In the early days of the war, Wolff’s work to supply food, medicine and at least some semblance of a joyous Purim to his community was highly publicized.

During one trip, the Times of Israel reported, he dodged bullets shuttling food back to the city from the border with Crimea, where his brother is also a rabbi. In another, according to Chabad.org, he went out to deliver food even as Russian tanks rolled through the town.

“Despite heavy fighting in the streets of Kherson, Rabbi Yosef Wolff did not abandon his community for a moment, remaining in the war-torn city through it all and serving the local population,” Rabbi Motti Seligson, a spokesperson for the Chabad movement, told the Jewish Telegraphic Agency. He called Wolff a “true hero of the Jewish people and for people of good conscience everywhere.”

Before the Holocaust, Kherson was a major center of Jewish life, with some 26 synagogues, but now, there is only Wolff’s. And before the war, it was like Chabad centers around the world: serving a local community, but also famously welcoming to unfamiliar faces, including foreign visitors. 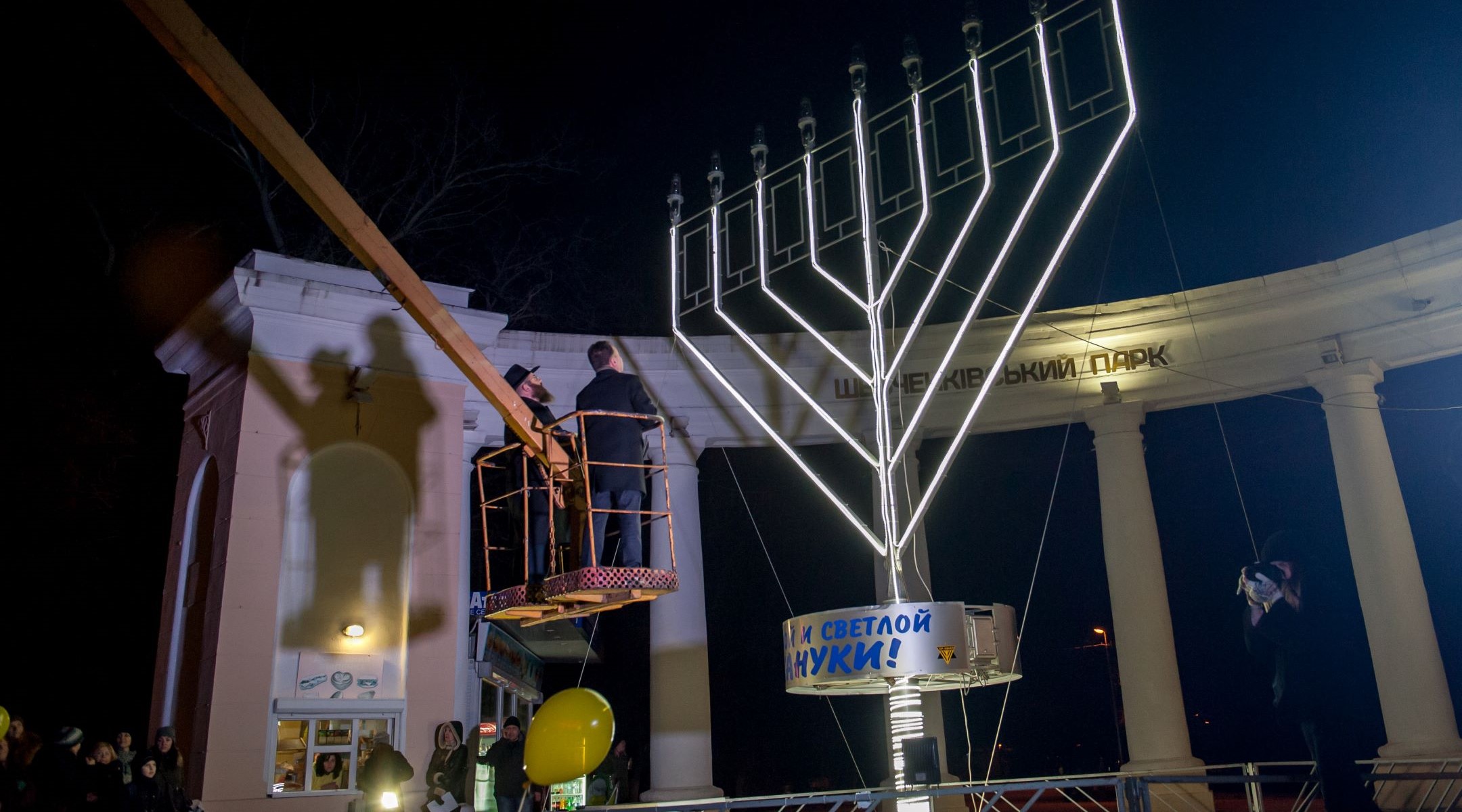 Opening the doors to newcomers took on added gravity after the war began and Russians streamed into Kherson. For much of the year, it was unclear whether Ukraine would regain control of the city, or whether it would become like Crimea and remain under Russian occupation. But last month, Ukraine liberated Kherson, generating scenes of jubilation — and putting anyone perceived as collaborating with the Russian army under suspicion.

Some of that suspicion landed on Wolff, who had allowed Russian soldiers to pray in his synagogue. The soldiers were Jewish officers who had arrived with armed guards, he told the New York Times.

In the days after liberation, he left Kherson, and Ukraine, for Germany. Now, with efforts to penalize collaborators underway, he told the newspaper that he is not sure when or if he will return.

Among those who remained in Kherson was a prominent member of the Jewish community who is now being prosecuted for his choices amid the messy reality of occupation.

Illia Karamalikov, a nightclub owner and member of Kherson’s city council, was close to Wolff, frequently allowing Chabad to use his nightclub’s space for events, the rabbi told the New York Times.

In the early days of the occupation, Kherson descended into a state of lawlessness. The Ukrainian civil administration fled ahead of the Russian forces and, after conquering the city without much resistance, Russia took little responsibility for its administration, instead sending soldiers on to other targets such as neighboring regions of Odessa, Mykolaiv, Kryvyi Rih — Ukrainian president Voldymyr Zelensky’s hometown — and ultimately, Kyiv.

Looting was rampant, and cut off from power and supply lines, the thousands of people who remained in the city faced a real risk of starvation.

It was locals who managed to bring back some semblance of order. Karamalikov helped organize a 1,200-strong community patrol to enforce curfews and watch for looters. 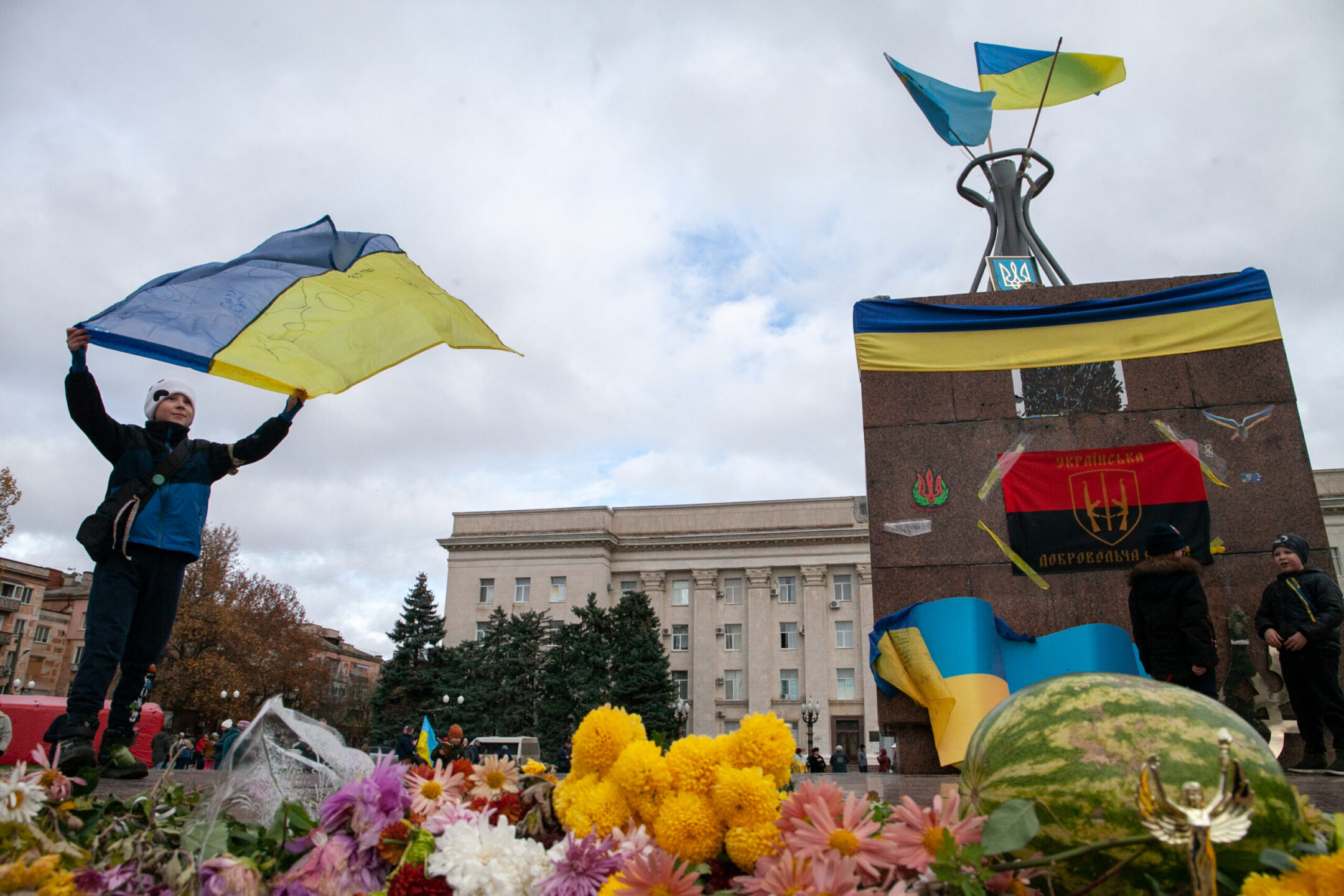 A boy stands with Ukrainian flag in the central square of Kherson after the city was liberated from Russian occupation, Nov. 19, 2022. (Oleksii Samsonov/Global Images Ukraine via Getty Images) Image by

It was in that role, according to the New York Times report, that he found himself face to face with a lost and confused Russian pilot, whom his men had taken into captivity. Karamalikov held the prisoner in a utility closet in his home for a night, before ultimately making the decision to return him to the Russian forces unharmed.

That earned him a 12-page indictment from Ukraine, as he ran afoul of new laws enacted at the outbreak of the war that stipulate that “cooperation with the aggressor state, its armed formations, or its occupation administration;” are punishable as acts of collaboration under Ukraine’s criminal code.

Many of those who spoke to the New York Times said the laws don’t account for the reality of living under occupation.

“All these people who ran away are judging us,” Wolff told the newspaper. “These are cruel times.”

Through returning the soldier, Karamalikov allegedly “organized the further participation of a Russian serviceman in aggression against Ukraine,” according to his indictment.

But many in Kherson are not sure what other option they had. Karamalikov’s community watch organization was a volunteer and non-military force whose limited power involved pressing looters into doing community service. To have harmed the soldier would have made them combatants against Russia.

“We wondered later: Should we have killed the soldier and kept it secret?” one of Karamalikov’s watchmen, Andriy Skvortsov told the New York Times. “But I’ve decided no, that wouldn’t have been good.”

“With a life in his hands, I can’t imagine Illia ever killing anyone,” Wolff told the newspaper. “What he did was the most humane decision he could make.”

The post With Russian troops ousted from Kherson, local Jewish leaders find themselves accused of collaboration appeared first on The Forward.